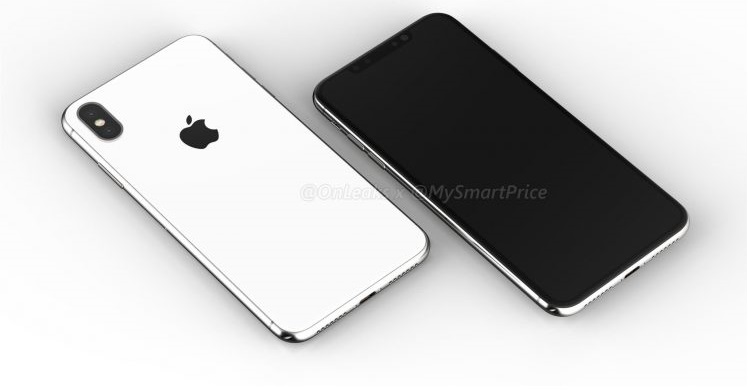 So, we had our first glimpse at some of the most accurate renders of the 6.1-inch iPhone that is highly rumoured to debut this year. However, there will be two other models alongside this new cost-effective variant. They will be an upgrade of the traditional iPhone 8 and 8 Plus. We’re not sure what they will be called but they will be 5.8-inches and 6.5-inches in size, as per current info. After yesterday’s 3D video of the 6.1-inch iPhone, we now have our first bare-all leak of the 6.5-inch iPhone.

The renders are brought to us by a collaboration between Mysmartprice and Onleaks much like the previous leak. They might be pretty accurate too as far as the history reflects. As we’re aware, the 6.5-inch iPhone will be a bigger sized iPhone X in every aspect. So naturally, the dimensions will change, and here they are 157.5×77.4×7.7mm (9.1mm with the camera bump). Take a look at the 3D rendering of the handset below.

Furthermore, there are almost no design differences between this model and the original iPhone X. There’s the stainless shiny metal sides, the glass-plated back, the dual camera, no fingerprint, everything is the same.

What we’re still not dead sure about are the internals and the components as this leak is only a design overview. While the 6.1-inch iPhone is widely believed to integrate LCD displays for cost-cutting, the other two iPhones coming this year should be OLED. However, we have no idea if this could be an OLED panel we’re seeing.

We expect a September debut of the new lineup of iPhones. However, the LCD iPhone might see the light of the day a bit later in November.