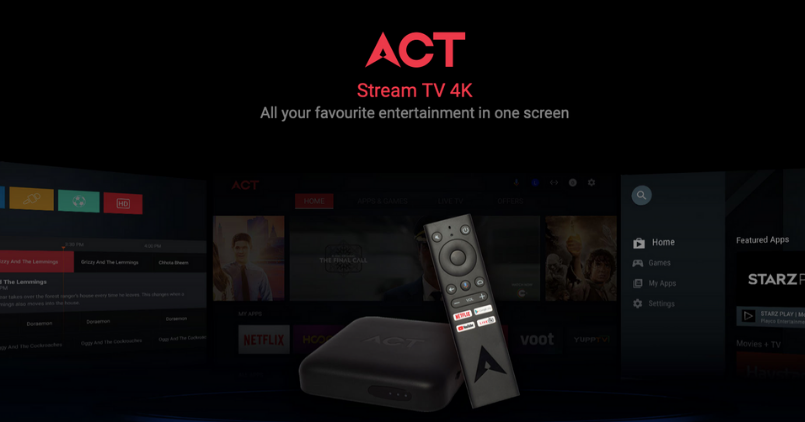 The Stream TV 4K Box will cost you Rs 4,499. If you have been living in the cities where ACT Fibernet is present (available in Delhi as well). Then, you must know that the company is India’s one of the largest fiber-focused broadband provider. Today in Bengaluru, they have announced their first consumer hardware product.

ACT Fibernet Stream TV 4K: What to expect from this service?

This streaming device is said to take care of the 360-degree need for online streaming. With a lot of online streaming services like Netflix, Sony LIV, Hotstar, ZEE5, SunNXT, and more popping up online. It has become quite a confusing task for a consumer.

The ACT Fibernet here plans to aggregate all the popular online services plus gives access to more than 3000+ apps on Google Play Store accessible on your TV for streaming. Apart from these, the key features of the streaming device include single-click subscription.

As a part of their monthly bill, customers would have to select the plans from OTT, and without any hassle, the payment can be done for all the subscribed channels under one roof. This streaming box is powered by Android 9 Pie and thus allow access to the range of apps on the Google Play Store.

It allows connecting hard disk, USB, joysticks, camera, and more. You can video chat as well as play games on this box unit. Interestingly, the first 5000 customers would get this streaming device free of the cost required they’ve subscribed to the ACT Fibernet services. Further, expect exclusive offers from VOD (Video on Demand) apps, extended trial periods, free access to Pay-per-view content, and more offers.

Would you be interested in signing up for the Act Stream TV 4K service? Then, we suggest you head over to their website (www.actcorp.in/streamtv4K). Also, let us know if you found this streaming device helpful or not.