Amazfit GTS review: A promising smartwatch with some chinks 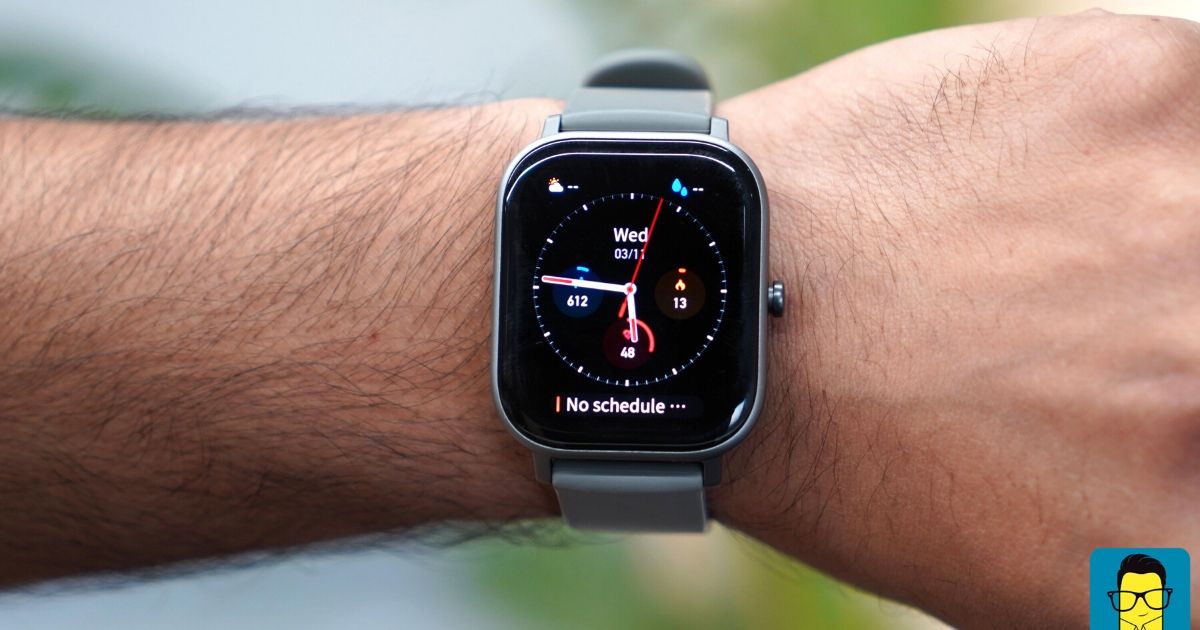 Xiaomi-backed Amazfit is behind some of the most popular smartwatches launched in recent history. The wearables from the company’s stables have impressed me with their exemplary battery life and good fitness-tracking capabilities. Recently, I was sent the brand’s all-new Amazfit GTS for review and here’s why I think the smartwatch deserves to be on your wrist.

Let’s not beat around the bush – the Amazfit GTS bears an uncanny resemblance to the Apple Watch. In fact, from a distance, you’d be hard-pressed to tell one from the other. That’s not necessarily a bad thing, as you’re getting a fancy design for the fraction of the cost of the OG model. Plus, it helps that the company has crafted the smartwatch’s casing using Aircraft-grade alloy, which doesn’t just keep its weight down, but also adds to the joy of wearing the GTS. 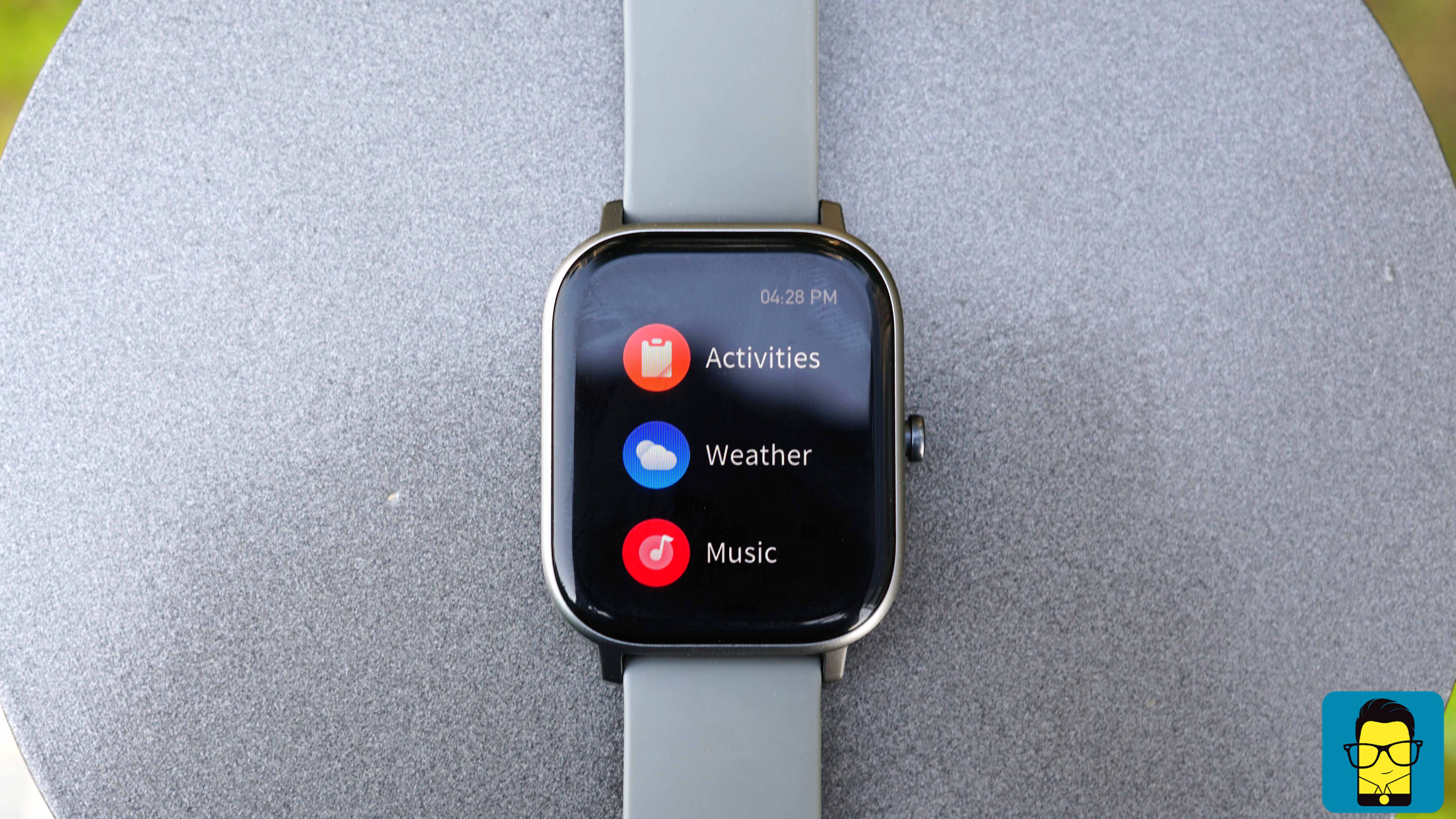 As far as looks are concerned, Amazfit has a showstopper on its hands (pun intended). For one, the wearable is extremely sleek and has a minimalistic dial, allowing buyers to dress it up or down. Secondly, you can pick up the GTS with a colourful strap, including peppy Vermillion Orange and Steele Blue hues which add to the wearable’s flaunt factor. That being said, you won’t be locked to a strap should you opt for the smartwatch as the unit features quick-release pins, which allow buyers to sift through different straps seamlessly. All said and done, Amazfit has done a darn good job with the design of the GTS. 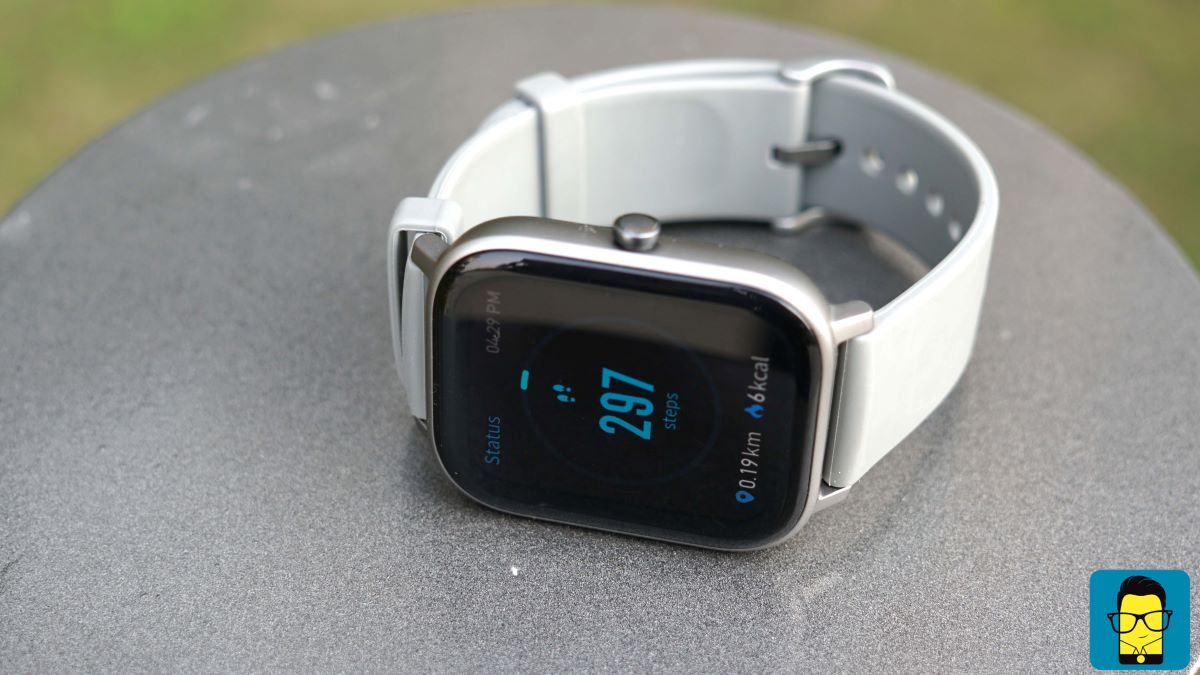 The Amazfit GTS ships with a single physical button, cleverly hidden in its crown. The button is used to go back to the main menu and power the watch on or off. Apart from that, buyers will get a heart rate monitor on the wearable’s underbelly. Barring that, the smartwatch is void of any toggles, which furthers the GTS’ clean and minimal aesthetics.

Thanks in part to its sleek chassis, the Amazfit GTS is extremely comfortable to wear. Moreover, the watch is featherlight at just 25g and you’ll all but forget that you’re wearing it after a while. This helps immensely if you want to wear the smartwatch to bed at night. I’d also like to point out that unlike the competition, the GTS’ crown didn’t bite my wrists when I was doing pushups or burpees in the gym. Lest I forget, the GTS is water-resistant up to 50m, so you can sweat it out in the gym without worrying about damaging the smartwatch. 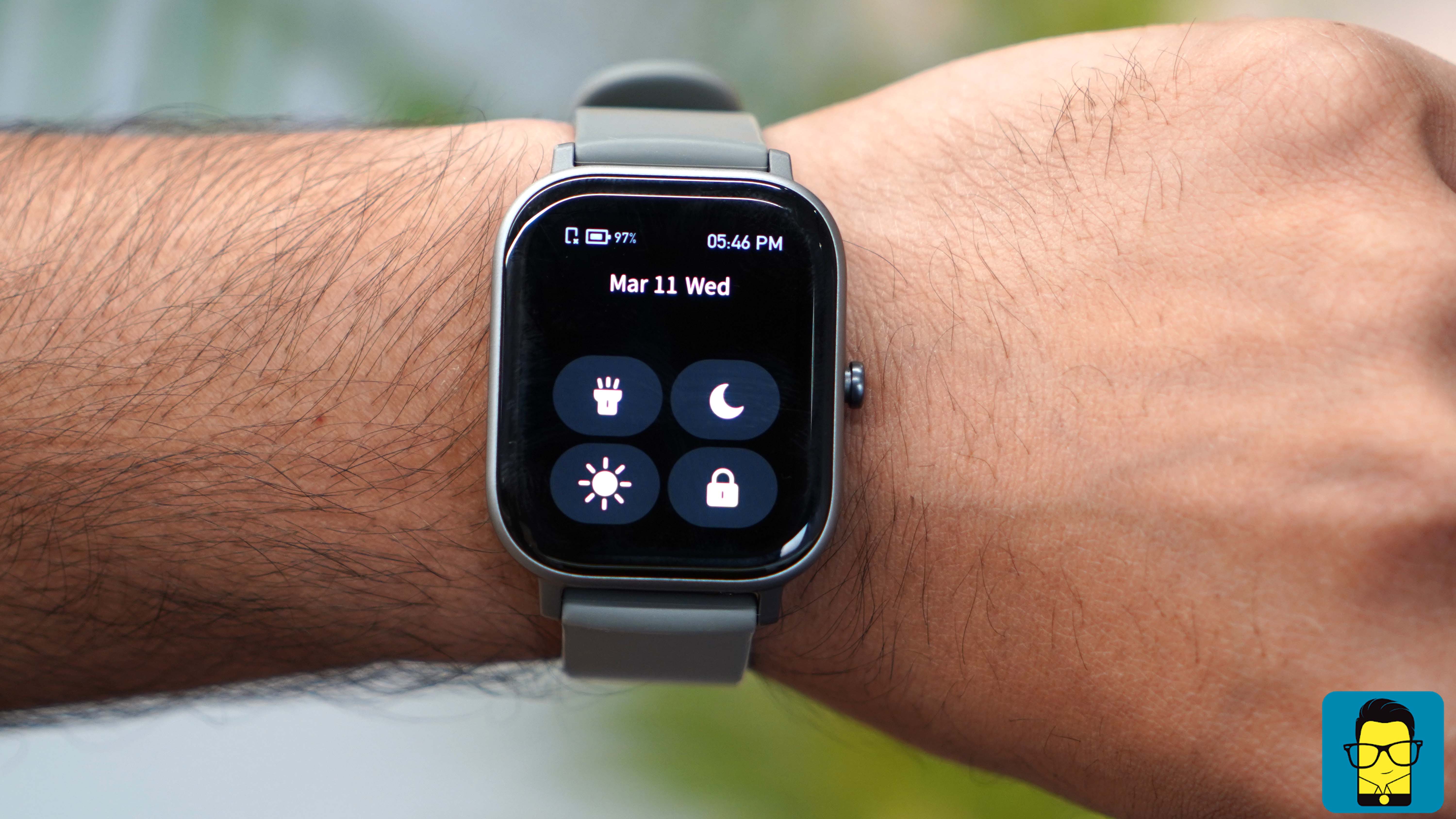 The Amazfit GTS ships with a 1.65-inch AMOLED display which is plenty sharp and bright for day to day usage. Moreover, the screen is bordered by slender bezels, ensuring you get a lot of screen real estate without making the display seem big and clunky. You’ll also get always-on display functionality with the smartwatch, along with a ‘’raise to wake’’ feature to turn on the display.

Much like its brethren, the Amazfit GTS also runs a proprietary unnamed OS which, simply put, is as barebones as it gets. Unlike competing smart wearables, the GTS doesn’t come with support for third-party apps which somewhat limits the functionality of the smartwatch. Furthermore, while at first glance the smartwatch does offer a healthy variety of watch faces, it’s nowhere close to what you’d get with say, the Fitbit Versa 2. 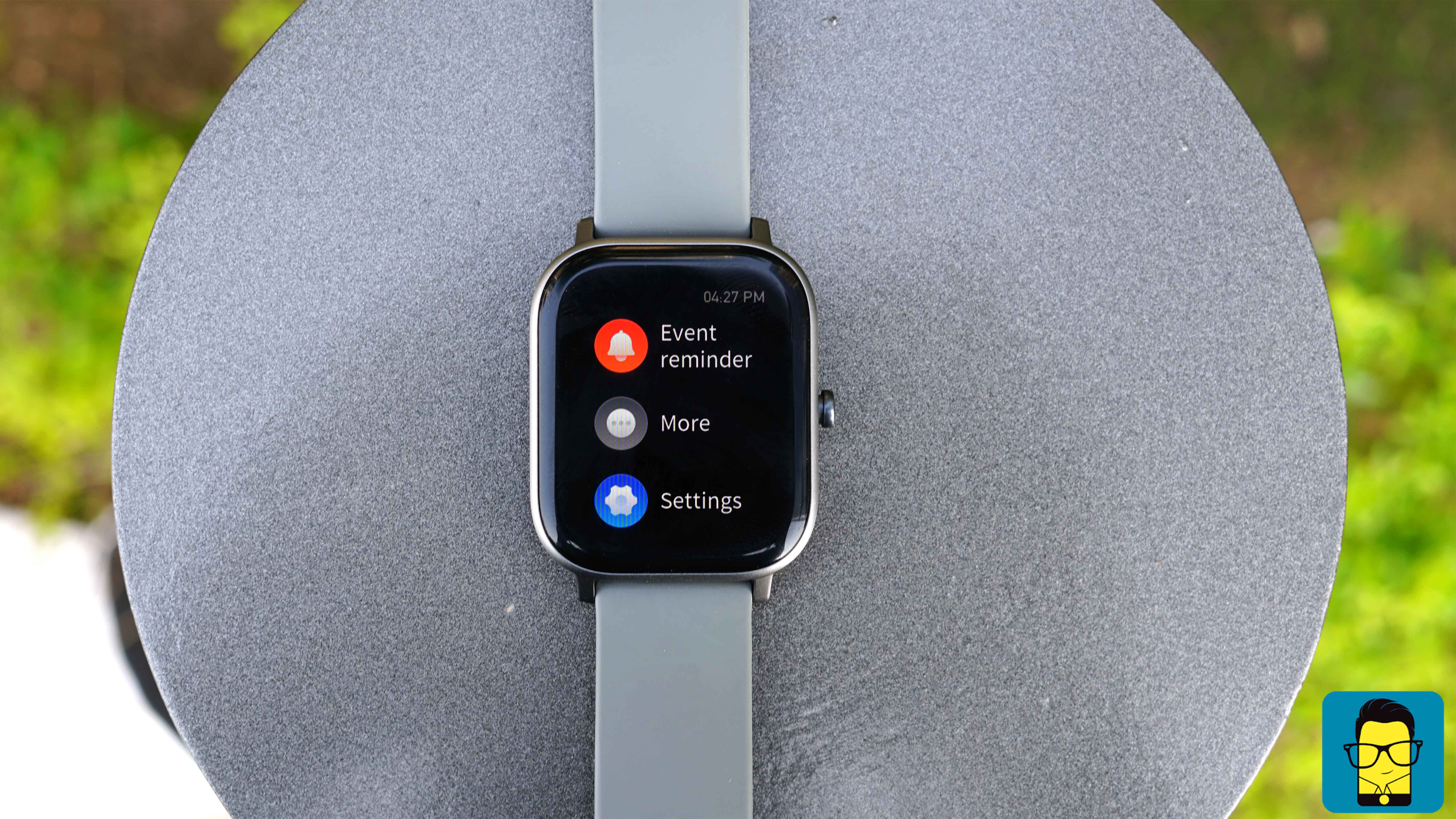 One upside of the lightweight overlay is that you’ll seldom notice any lag or stutter whilst navigating through the user interface. Speaking of which, the GTS offers touch-based controls to go about the UI and a swipe to the left, or the right will let you access the step counter and the heart-rate monitor. A swipe up from the bottom brings up the watch’s menu from where you can access the different workout modes, whereas a swipe in the downwards direction pulls up the quick-action toggles. A single tap on the crown or the physical button will take you back to the home screen and a long-press is used to end a workout or an activity.

I really liked the app’s interface as it presented me with my fitness stats front and centre. The downside, however, is that the smartwatch takes a hot minute to sync the data with the app. The scenery remains unchanged should you want to update the GTS’ firmware too, or change a watch face which ideally, shouldn’t be the case. Moving on, the app lets you hand-pick which services can push notifications over to your wrist.

The interface, as I mentioned previously, is tidy and neat, so no complaints here. Unfortunately, even with the notifications turned on, I noticed that the watch wouldn’t buzz my wrist as I was getting a message as there’d be a slight delay. What’s more, there’s no way to revert back to the notifications through the smartwatch, which is a bummer. Compared to the Fitbit Versa 2 which retails for a couple of thousand bucks more and offers voice dictation as well as custom quick replies, the GTS did leave me wanting for more.

The Amazfit GTS can track 12 different activities, the likes of which include outdoor running, walking, cycling, etc. The smartwatch comes with a built-in GPS too, which latched onto my location within 20 seconds. Correspondingly, you can map your routes using the GTS without having to carry your phone when you’re out cycling or on a run. The step tracking was accurate for the most part too, and the smartwatch didn’t factor in ghosts steps either, which is great. 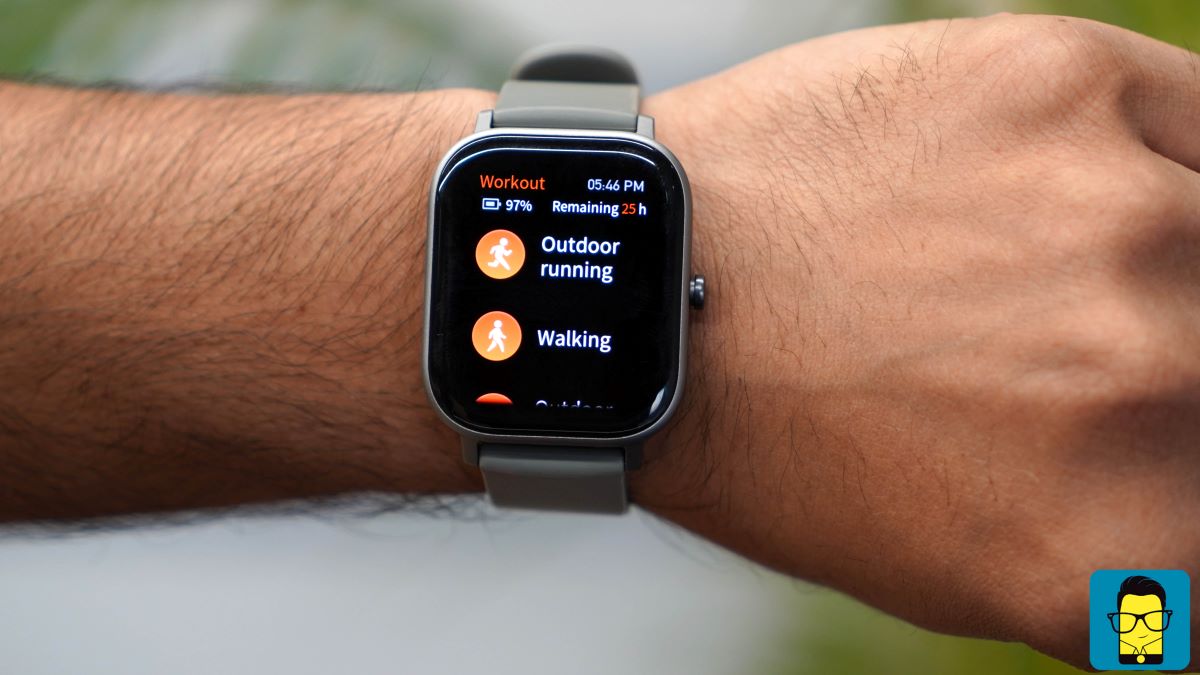 Amazfit’s GTS also lets you track your swimming routines, although I couldn’t quite put the feature to test since it’s quite cold in Delhi right now. Interestingly enough, the watch starts acting up should water droplets hit the display, which is why the company restricts touch-screen usage when swimming. As for sleep tracking, the Amazfit GTS can map your sleeping patterns, albeit it doesn’t provide insights into a user’s REM sleep. In fact, the only three metrics that you get to work with are the duration of your deep sleep, light sleep and your sleep score, which gives vague insights on how to sleep better. 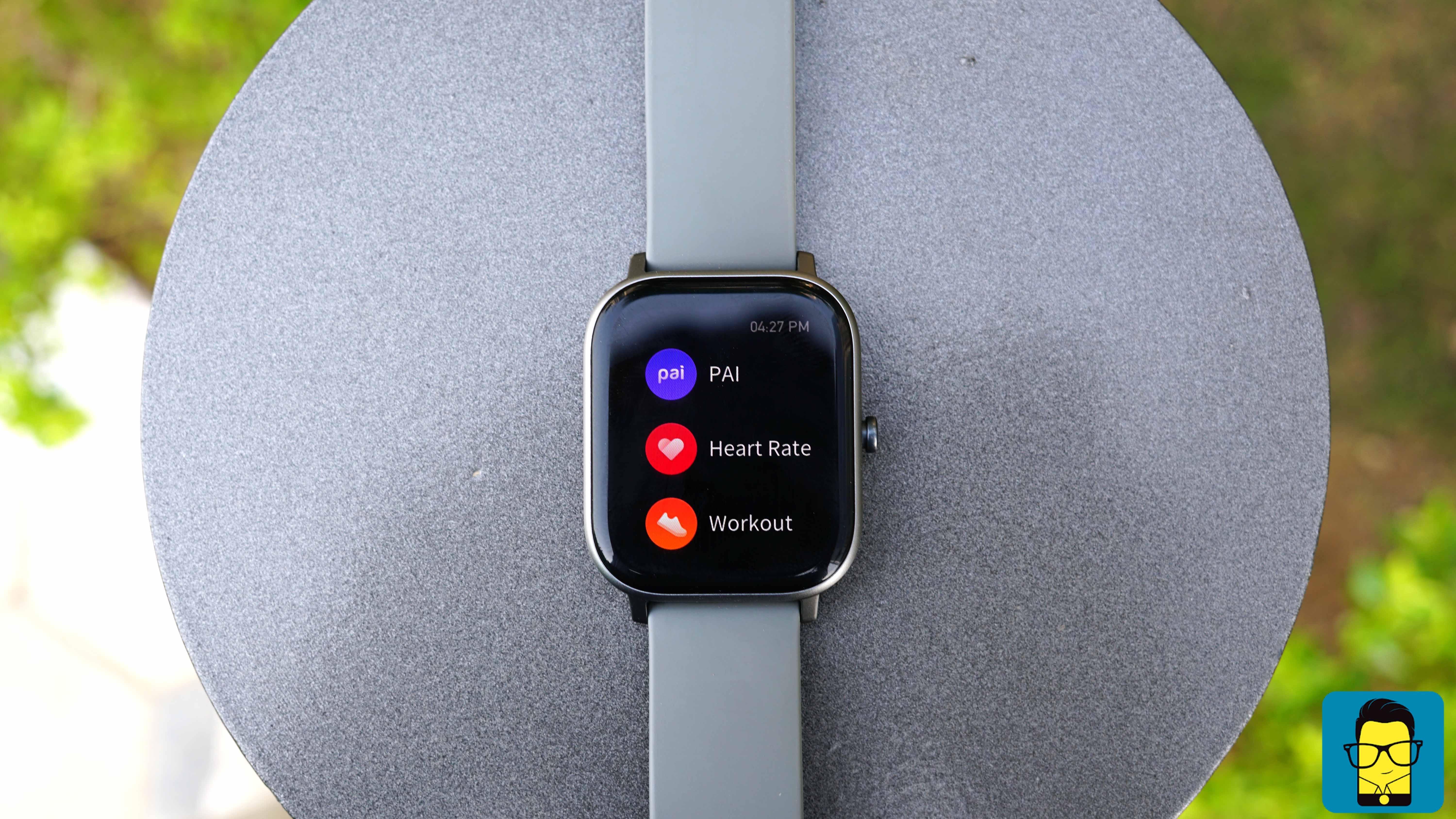 That being said, Amazfit’s smartwatches rarely ever disappoint in the battery department and the GTS is no exception either. The smartwatch advertises a two-week battery backup and during my stint with the wearable, I was comfortably getting close to nine days with notifications enabled. Suffice it to say, the GTS will spend more time strapped to your wrist rather than staying put on a charger.

The Amazfit GTS retails for Rs 9,999 and for the price, is a fairly capable smartwatch. The wearable offers good fitness-tracking features, a gorgeous AMOLED display, and class-leading battery life. Unfortunately, as neat as the UI is, it feels – for the lack of a better word – barebones when compared to similarly priced devices such as the Fitbit Versa Lite. Now, if you don’t care much for third-party app support in the first place then, by all means, the GTS is a stellar buy. If not, then you might want to look at what else the market has to offer.