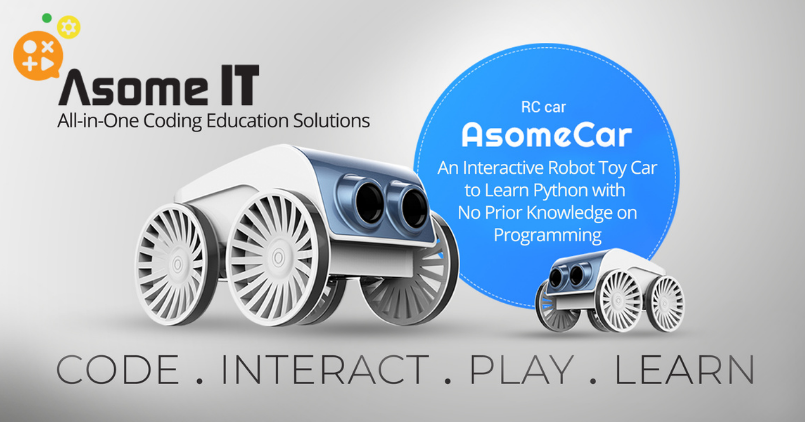 Korean brand AsomeIT is introducing a new toy car for kids who are interested in learning code in a fun way named — AsomeCar. It claims to be an educational Wi-Fi enabled code learning toy car, which is remotely controlled as well. Kids are supposed to be brushing up their coding skills while having fun at the same time with this IoT robot car, the company suggests. The acclaimed intuitive toy car here is given code through physical computing, which makes it a self-driving car. The kids who are interested in buying will have to learn to assemble it and as well as learn code during this process. It’s just not a regular toy car rather it is packed with Wi-Fi support, and features sensors such as ultrasonic sensors, colour sensors and has wheels, which are rotatable in 360-degrees. 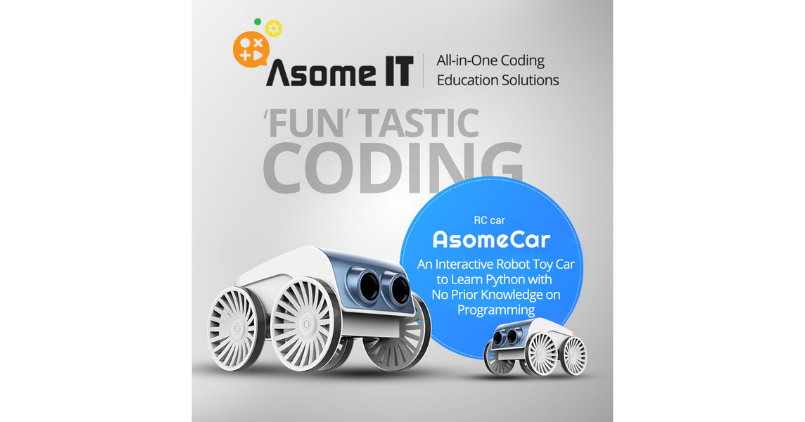 | Read more about the AsomeCar from AsomeIT’s Official Press Release |

Korean brand AsomeIT debuts in India with AsomeCar – an educational Wi-Fi-enabled, remote-controlled code learning toy car for kids. It helps kids discover coding while they have all the fun playing around with an IoT robot car that’s designed for learning code through physical computing. AsomeCar is an intuitive self-driving car where kids need to assemble it, understand it, evaluate it and learn coding in the process, to control it. Key features include Wi-Fi, ultrasonic sensors, colour sensors and 360-degree wheels.

Commenting on the new debut with AsomeIT , Ajesh George, MD , TekkiTake said “ In today’s era of technology, it has become highly essential for interested kids to start coding , and AsomeIT products helps to do that in a more informative , intuitive and fun filled way.

AsomeIT AsomeCar is a highly educational toy car designed especially for kids and exclusively for code learning through physical computing. Using a 360-degree motor for each of its four wheels and its in-built colour sensors, the car is capable of rotating on the spot, tracing lines and autonomous navigation. Kids can learn to control it wirelessly through Wi-Fi using a smartphone app and also program its motions along the way. Additionally, the car’s sensors can be trained to teach it to escape from a maze, or simply code-in a whole new navigation method. AsomeIT provides a dedicated educational platform, AsomeCode, where even inexperienced computer users can learn coding by simply clicking away. Coding can now be super-fun for everyone above 4+.

AsomeCar comes as a kit, and one needs to initially assemble the car with their own hands. This process not only educates your kids in assembling but also stimulates their brain during process. Based on four AAA cells, this 330-gram Wi-Fi-enabled robot car can be controlled using a smartphone app, and programmed using a basic computer.

With its ultrasonic sensors and 360-degree servo motors on all four wheels, AsomeCar can determine distance and rotate on the spot. Using the AsomeIT coding software you can also use your imagination to upgrade it with new motions and functions. Activate your newly created motions using your smartphone and have fun creating your very own self-driving car with your own hands.

The software coding does not end with just creating motions. Once it’s mastered, kids can create their self-driving, maze-escaping, line tracing robotic autonomous car within minutes. Coding is very simple – your kids can learn with just clicking away on the program. AsomeIT is based on the most popular

programming language – Python. By engaging in fun activities with robots and electronic devices, AsomeIT has combined the importance of learning Python.

AsomeIT has partnered with TekkiTake as the official retailer/distributor in India for AsomeCar. It will be available for an introductory price of Rs 14,999 on Amazon.in and Tekkitake.com, including a 1-year standard industrial warranty period.