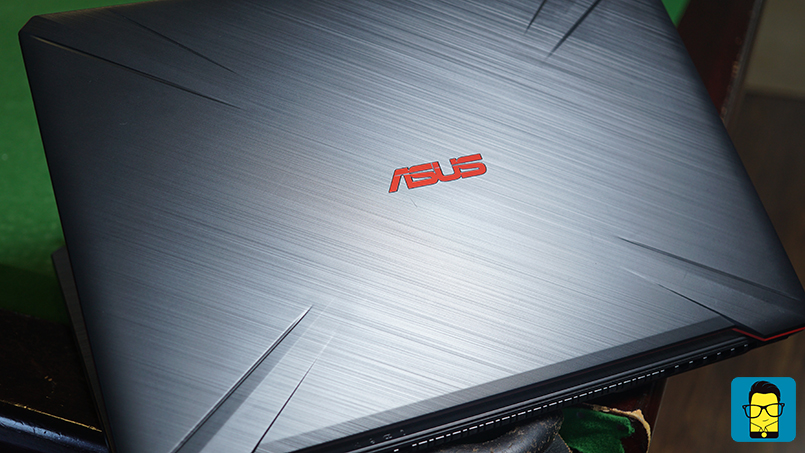 I remember back in the day, gaming laptops used to come with hefty price tags, making them a thing that only the rich kids could afford. However, ever since the introduction of budget gaming GPUs, the price of these systems has gone down. Now, you can easily get rigs that support 60fps on medium settings at a very decent price point. And well, we have one of them right here. This is the ASUS TUF FX705DY. It’s a 17-inch gaming laptop, priced at just Rs. 60,900. Sounds amazing, right? So, what has ASUS done to keep the price so short, and is this laptop even worth your buck? Let’s check it out.

Let’s talk about the design and build quality at first. The ASUS FX705DY is built like a tank, with ASUS claiming Military Grade certification. Despite having a plastic body, the design looks and feels sturdy. There are decent I/O options all around, and the overall design looks like a gamer laptop. I mean, for Rs. 60,990, you get a laptop that looks a lot like the premium gaming laptops out there. I was carrying this laptop to work, and everybody felt this was a laptop that should be priced around 1 lacs based on the design and build quality. 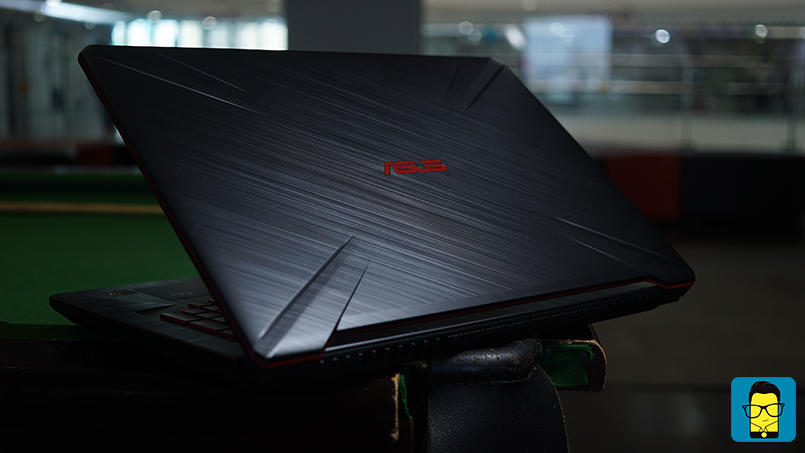 All in all, the design of the ASUS TUF FX705DY looks super premium, and it is a no-brainer as to why this laptop is praised by many. It looks fresh, neat, simple, and elegant. This exists while maintaining the look as well as feel of being a budget gaming laptop.

Moving on to the I/O selection, ASUS has been pretty generous in that front. On the left side, you’ll find the DC charging port, followed by an RJ45 LAN port, a full-size HDMI port, a USB 3.0 port, two USB 2.0 ports, and a single headphone jack. 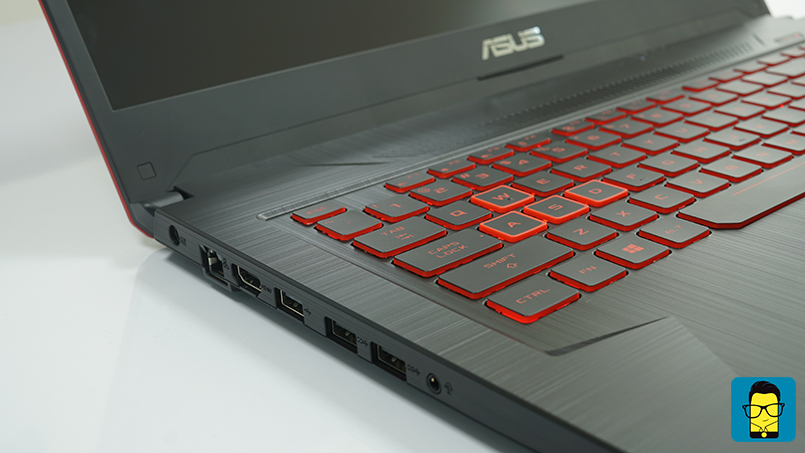 The right side is pretty much empty, with just a Kensington lock residing there all alone. Now, considering that this is 2019, the lack of a Type-C port is something to be talked about. That said, I’m not sure how many gamers would actually consider that a deciding factor.

Let us address the elephant in the room, which, quite literally, is the display. The ASUS TUF comes with massive 17.3-inch display clammed inside the frame of a slightly bigger 15.6-inch laptop. This is obviously possible thanks to these minute bezels. At this price point, the FX705DY is probably the only laptop that offers a full-sized 17-inch display. Which is clearly the highlight of this laptop. 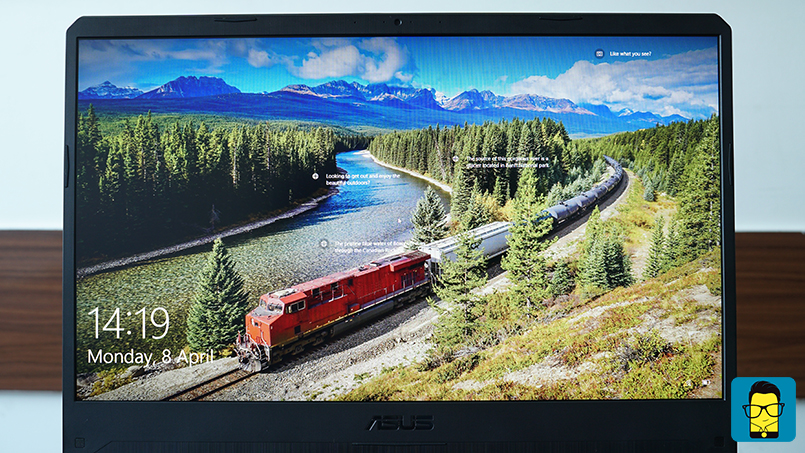 I’ve used the laptop for gaming as well as content creation at work. As opposed to my standard 15.6-inch display, the FX705DY certainly opens the door a whole new world of productivity. 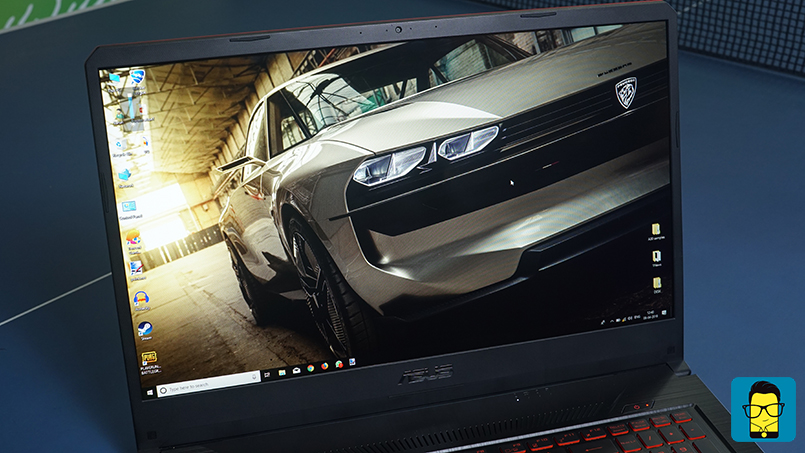 As for the display quality, the screen is still Full HD and is capped at 60Hz. Now many of you would be asking for a higher resolution, but to be fair, I own a 24-inch gaming monitor, and even on that, I stick to Full HD. Also, keep in mind this is a budget gaming laptop, so there is that. Oh, and to make things sweeter, the Full HD display also uses a lot less battery. I’ll be talking more about the battery life later on in this review, so keep reading.

Now, moving on to the keyboard, which is a major factor for me. I am both a gamer and a writer, and to be very frank, the keyboard is bad for either use case. The keyboard layout is haphazard, and the spacing is sort of weird. I do appreciate ASUS using a full-size arrow key setup here. The key travel here is also decent, and acceptable for gamers, but really bad for normal typing. There is the usual red-colored backlight here, which is too cliche, but then again, I wouldn’t make a fuss about it. 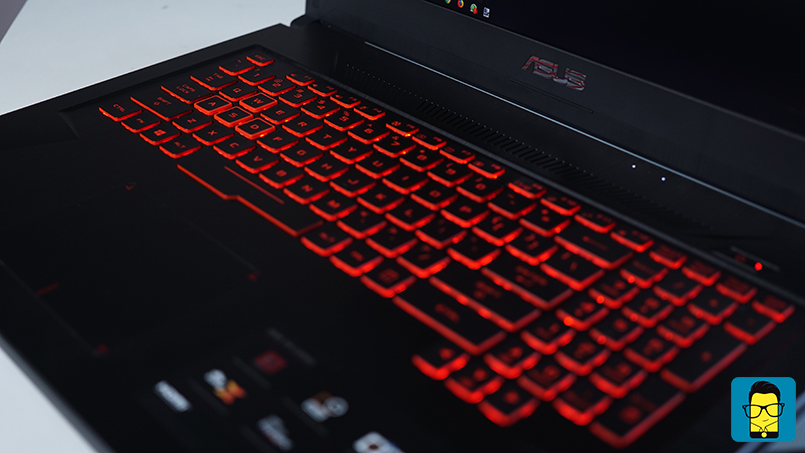 People generally say I’m a bit harsh on keyboards, but that’s for a good reason. The keyboard here is genuinely really bad. As a gamer, I wouldn’t really care about it that much, since the layout is pretty much fine. But the general feedback is way too absurd. And to top it all, there is the layout that is messed up if you’re someone who uses their system for typing a lot. Now, the reason why I’m highlighting this part right here is that I understand the audience. The majority of the users buying this laptop would be college students on a budget, who can use a system for their studies and projects, while gaming on the side. As such, the keyboard of this would be a major let down. 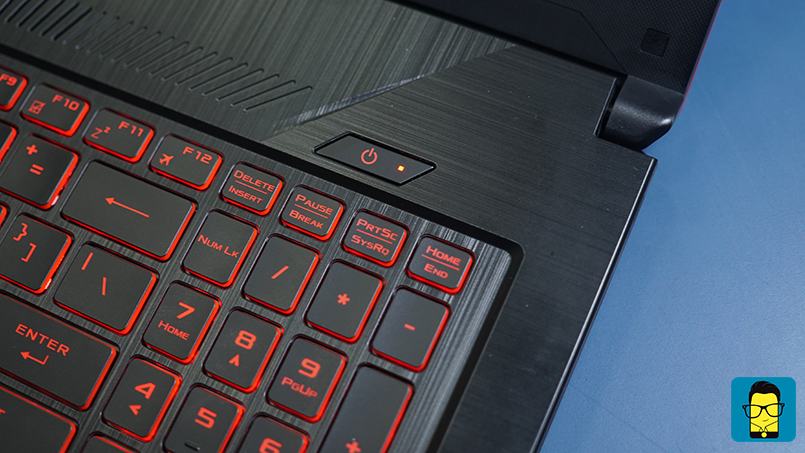 My average speed on my daily driver is around 68 wpm. However, on the ASUS TUF FX705DY, even after two weeks of extensive use, the best I could manage was 51 wpm, with 97% accuracy.

Well, if the keyboard was bad, the touchpad is a whole other mess. To start off, there is a massive rattle here. And the actual press mechanism here is super weak too. Now, I’ve had a weird relationship with ASUS’ touchpads, and I’m sure most PC reviewers will tell you the same. I previously tried out the ZenBook 13, on which the issues seemed to have been fixed. But then, I got to experience the ZenBook 15, its bigger brother, and the nostalgia was there. Now, those two are ultrabooks, but the reason why I’m bringing them out here right now is that despite carrying the TUF brand, the FX705DY is, after all, an ASUS laptop. And as expected, there are the usual touchpad issues here with ghost touches and skipping touch. 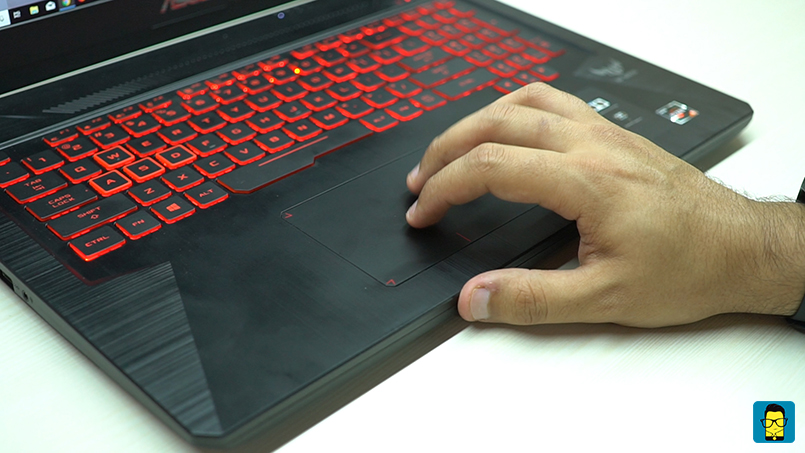 Yes, it comes with Windows Precision Drivers. But the gestures also don’t work as smoothly as you’d expect them to. Now I do acknowledge that for anyone who buys it for gaming will use a gaming mouse for sure. However, it does not justify ASUS putting an absolutely horrendous touchpad here.

Okay, so the audio department is something I consider genuinely very important since it really adds on to the entertainment quotient. I mean, gaming is, after all, a sort of entertainment, and audio plays a big role in that. Sadly, that is another department where ASUS has done cost-cutting. The speakers here are located on either side of the laptop. 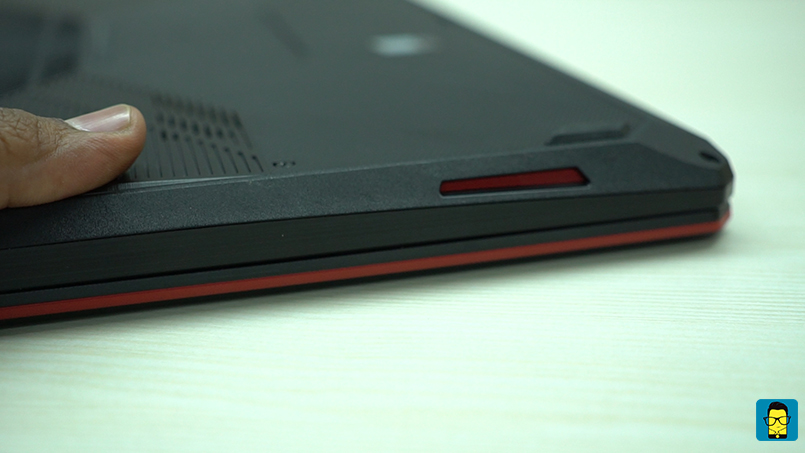 Now, while the location is decent, the audio output is really bad. The levels are really flat, there is hardly any punch, and moreover, the overall volume isn’t that high either. The audio is really flat, and there is hardly any bass. The vocals are hushed, and to be honest, no genre plays well on it. That said, the headphone jack does work well, so serious gamers shouldn’t be worried about that.

Serious gamers. Yeah. I just said that, right? Now, what do serious gamers care the most about? Performance, duh. And that is one area where the FX705DY is, um, how should I put it… let’s just call it mediocre. Okay, so reading off the spec sheet, the ASUS TUF FX705DY comes with AMD Ryzen 5-3550H processor clocked at 2.1GHz. You get 8 gigs of DDR4 RAM as well. Now, as for GPU, the Ryzen chipset in itself comes with Vega 8 graphics. However, ASUS has added a dedicated AMD RADEON RX 560X GPU. For reference, this card competes with the non-Ti version of Nvidia’s GTX 1050. As for storage, you get a 1TB SSHD Hybrid Drive at 5400RPM. Yeah, that last part is the biggest letdown. Thanks to that sluggish drive, the entire system runs super slow and laggy. Heck, I’ve had instances where opening just a YouTube video would make the system slow down. 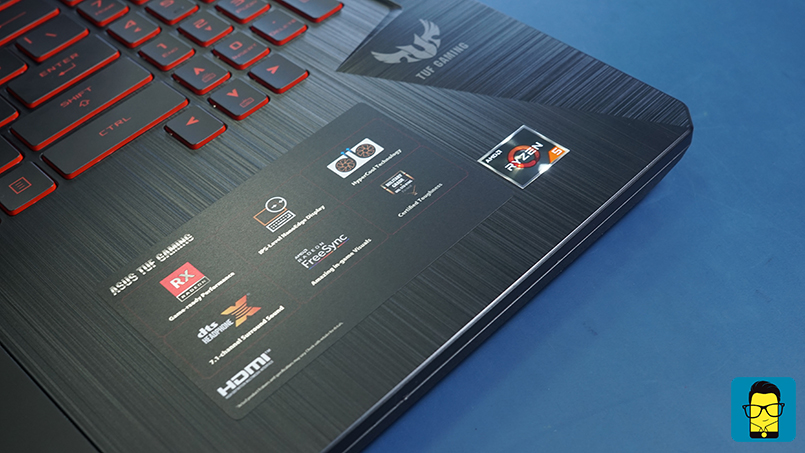 Thankfully though, gaming is a different story. The Radeon RX 560X really comes into play, pushing up to 60 FPS on all major AAA titles, at medium settings. Titles like Far Cry 5 and Assassin’s Creed Odyssey were both averaging at 55 fps, while PUBG ran at a comfortable 60fps. If you’re an eSports gamer, titles like CSGO and Rocket League were easily passing the 140 fps mark, so kudos to that.

Now, a lot of you have asked me about the upgradability of this system. There are a total of 11 screws you need to unscrew, with none of them being hidden. The hard part here is the prying, since this laptop is jammed shut very hard, and you really need to good prying tool to crank it open. Once inside, you can see that there is a lot of free space here, which explains the low cost of the system. To start off, there is an empty M2 slot for adding your PCIe SSD. There’s also an extra RAM slot, so you can upgrade the RAM as per your liking as well. 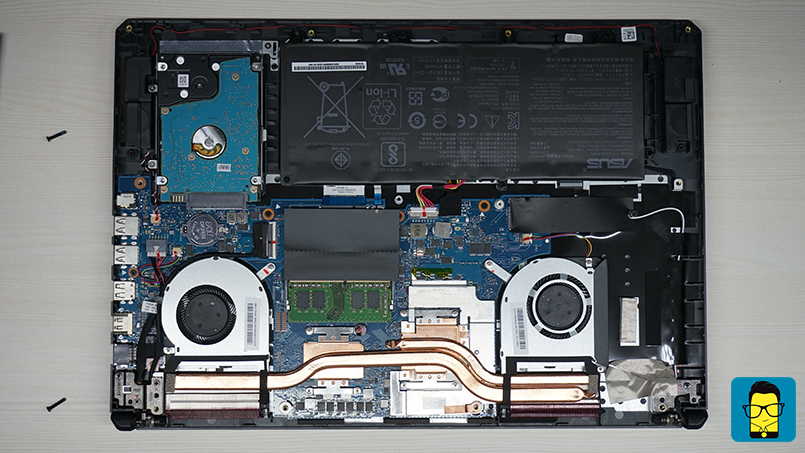 As for thermals, the laptop comes with a dual fan setup, which is great. What’s not great is that despite the massive space here, all ASUS could manage was 2 heatpipes. That said, the actual temperatures never crossed 62-degrees in my testing, so the software is clearly doing its job of optimizing well.

It is a gaming laptop, so you shouldn’t get your hopes high up in terms of battery life. I’m currently averaging about 2 hours on games like Rocket League, coz let’s be honest, you can’t expect me to be playing PUBG on the battery. In terms of normal usage, I was able to push it to about 3.5 hours. Do note that this was on the Balanced power profile, so I did experience slight hiccups while operating on a ton of Chrome tabs. 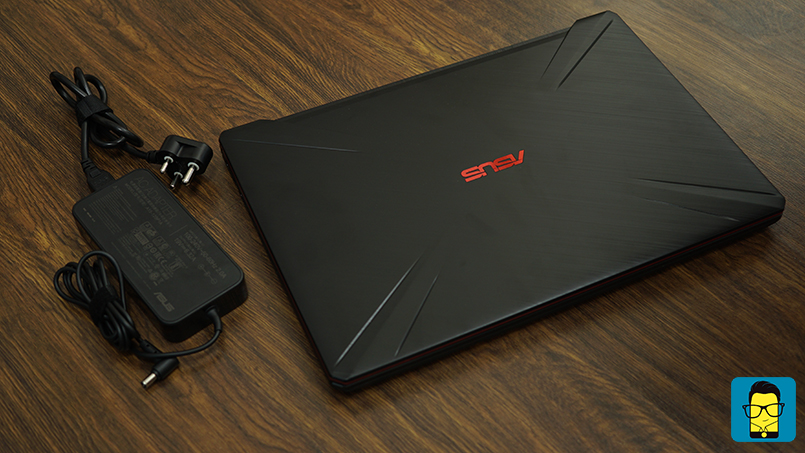 As for the charger, the laptop comes with a massive 120W charger, which as evident by its size, weighs quite a lot. Though, considering that the laptop itself also weighs 2.7kg, it makes sense.

Should You Buy The ASUS TUF FX705DY?

So, is the ASUS TUF FX705DY gaming laptop worth it? Let me try and process my review in a nutshell first to help you get a better picture yourself. At Rs. 60,900, the FX705DY is probably the only laptop that offers you a 17-inch display. As for hardware, it is decently equipped, while clearly leaving room for improvement. However, what matters is, is the package you get at Rs.60,900 worth it, to begin with? You get a sluggish storage disk, a horrendous keyboard and touchpad that can’t be replaced, a speaker setup that is sub-par at best. As for performance, while the Ryzen Radeon combo is good, would I pick it over an i5+GTX 1050? Not really.

At a slightly cheaper price, you can easily get the Acer Nitro 5, which is by far one of my favorite budget gaming laptops out there. What’s more is that it comes with 16GB of Intel Optane memory as well, to further boost the performance. The only compromise you’ll be making here would be a smaller 15.6-inch display, which, in my understanding, is a fair trade-off.

So, to finally answer the question. For me, the cons far outweigh the pros of the FX705DY, and it makes it really hard for me to actually recommend this laptop to someone. Sure, you can spend around 8k more to improve the storage and thus the performance, but there are things that you just can’t change, and all in all, it all looks like a compromise package just for a bigger screen. For me, the FX705DY is a no.

That said, if the pros still entice you, you can buy the ASUS TUF FX705DY by following this link.