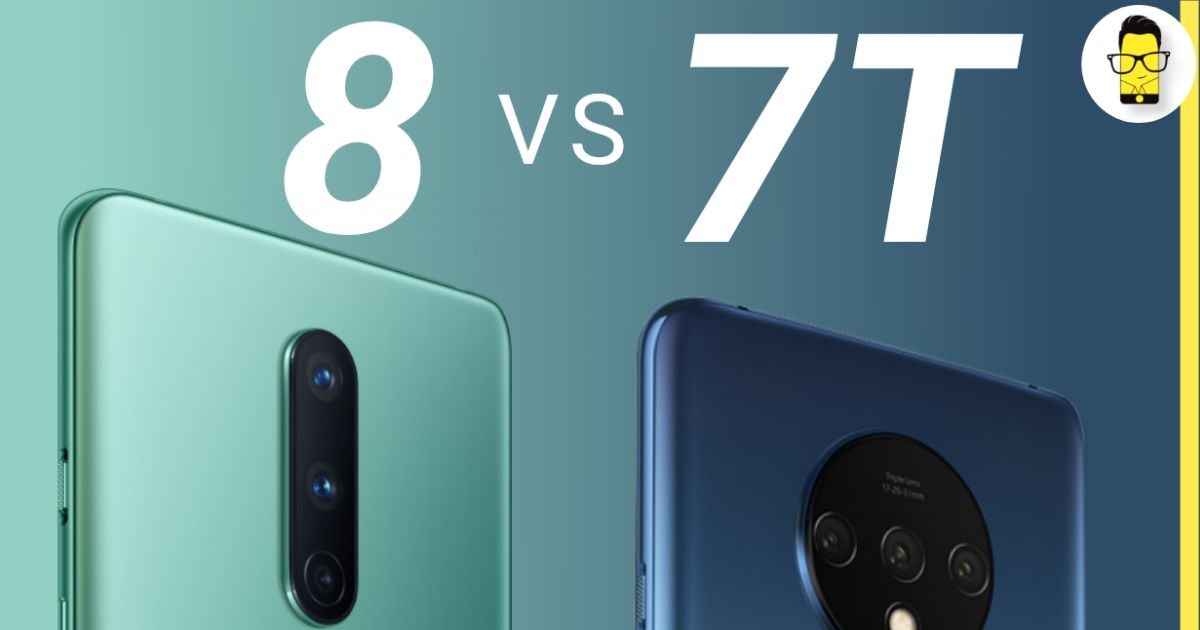 Is it just me, or were you a little disappointed with the OnePlus 8 too? I was watching the live stream of the launch event and while the 8 Pro brings a lot of firsts to a OnePlus device, I really don’t think the OnePlus 8 makes for a good buy over its predecessor, the 7T. Now I’ve had some time to collect my thoughts so, in this article, I’ll walk you through the top six reasons why you should still select the 7T, over the OnePlus 8.

Reason 1 – No major improvements in the display

Unlike the OnePlus 8 Pro, the OnePlus 8 uses a 6.55-inch, Full HD+, 90Hz display, which is the same as the display on the 7T. What’s more, the panels on both these devices are AMOLED in nature and they come with HDR 10+ certification too. Granted, the punch hole notch on the OnePlus 8’s panel looks better as it is a tidier cut-out but, the display on the phone is also curved this time around paving way for more accidental touches.

At the end of the day, given the choice between the two displays, I’d pick the flatter screen on the 7T in a heartbeat. Moreover, the added features you get with the panel on the OnePlus 8 are the same as the ones on the 7T too, including support for P3 and sRGB colour gamut, a dedicated reading mode and a night mode.

Reason 2 – No major improvements in performance

The OnePlus 8 is powered by Qualcomm’s Snapdragon 865 processor and therefore, it is going to be undeniably faster than the 855 plus powered OnePlus 7T. That said, the performance delta is going to be almost negligible between the two SoCs, especially under routine workloads. As for gaming, well – as is evident from other 865-powered devices like the Realme X50 Pro and the iQOO 3, games like PUBG and Call of Duty don’t default to the highest graphics on these phones. But, they do on the 7T.

I’d also like to point out that unlike the 8 Pro, the OnePlus 8 still uses LPDDR4X memory and not LPDDR5, which is the same as the one on the 7T. Storage-wise, both the handsets ship with UFS 3.0 storage too, so the read/write speeds will be the same on both the phones as well. Last but certainly not the least, Qualcomm’s Snapdragon 865 processor is not a groundbreakingly new chipset and it uses the same 7nm fabrication as the SD 855 plus. Therefore, you won’t get any major efficiency upgrades by opting for that chip either.

And, if you were going to make an argument for 5G on the OnePlus 8, then let me remind you that 5G still has ways to go before it is fully operational in India. By that time, you might be watching the launch event for the OnePlus 10.

I hate to break it to you, but if you were hoping to use OnePlus’ stunning wireless charging cradle that was announced alongside the company’s flagships, then you can’t – at least not with the OnePlus 8 as the smartphone doesn’t support wireless charging. I’ve also been informed that unlike the carrier models launched in the USA, the OnePlus 8 launching in India will not come with an official IP certification.

That’s really disappointing as for years, OnePlus has omitted this feature and I’d really hoped the brand would introduce it not only the OnePlus 8 Pro but also the OnePlus 8.

The OnePlus 8 is fuelled by a bigger 4,300mAh battery which is great but, the smartphone still makes use of the same 30W wired charging standard which is present on the OnePlus 7T. Making matters worse, devices like the Realme X50 Pro and the iQOO3 overshadow OnePlus’ Warp Charge tech by offering superior 65W and 50W charging respectively. In all honesty, having support for uber-fast wired charging speeds would have at least lessened the blow of not having wireless charging on the OnePlus 8.

Reason 5 – No telephoto camera on the OnePlus 8

We all know that the OnePlus 7T can click excellent macro photos with its wide-angle sensor which begs the question – why not implement that on the 8 as well. Instead, the smartphone ships with a dedicated macro sensor which, allow me to jog your memory, comes at the expense of a telephoto sensor. Lest I forget, the front camera on the OnePlus 8 is still the same 16MP IMX471 as on the 7T too.

It’s no secret that the OnePlus 8 is going to be more expensive than the OnePlus 7T when it launches in India. Now, while I don’t know the exact Indian pricing yet, the phone starts at $700 in the USA, which roughly translates to Rs 53,000 in India.

The 7T, on the other hand, starts at just Rs 34,000 and therefore, the obvious question is – would you pay nearly Rs 20,000 more for the OnePlus 8, a smartphone with a similar display, more or less the same performance, the same wired charging standard, and the same selfie camera as the 7T? Or, would you just buy the OnePlus 7T instead?

Do let me know what you make of the OnePlus 8 in the comments below and stay tuned to our blog for more updates on the same.