Coolpad Cool 3 with Dewdrop notch and Android 9 Pie launched in India at Rs 5,999 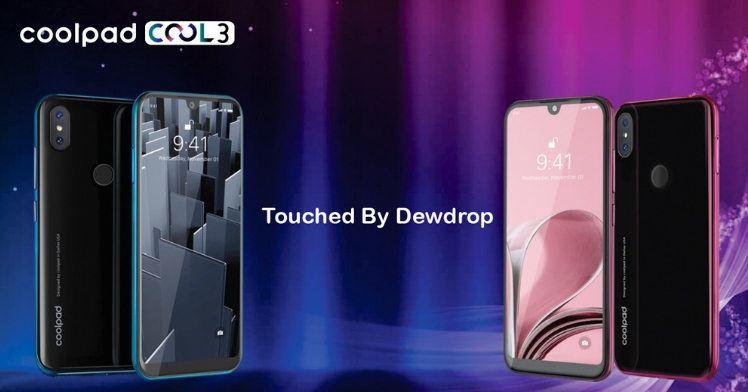 The Indian smartphone market is expandable unlike any other international markets and thus the brands here can be reborn. Coolpad is one such brand who is looking to redeem itself among the Indian smartphone consumers. The company has today launched its latest entry into the market, dubbed as the Cool 3, it is priced at Rs 5,999 and brings a slew of trendy features. The interesting fact that it will be available in online as well as the offline market. Let’s talk about them below.

Also read: Coolpad Cool 3 with dewdrop notch will launch in India tomorrow for under Rs 6,000

Flaunting a dual colour glossy back, it comes in four colours; midnight blue, ruby black, Ocean Indigo, and Teal Green with some unique pattern styling. The company claims that its team in the United States worked on the design of Cool 3.

With a 5.71-inch display and dewdrop notch design, the brand brings a trendy feature to the masses who are tight in spending their money on smartphones. The fact that there is a huge number of people in India who fall in this category, thus, it claims to cater to a large number of people. This full vision display has a HD+ resolution.

Talking about the internals, the company utilises a Unisoc chipset on its latest entry-level handset. The brand claims this chipset also offers an AI and AR/VR compatibility. There would be a 2GB of RAM and 16GB of internal storage.

As far as the biometric security is concerned, it comes with a fingerprint sensor and face unlock capability, which is a good proposition in this price segment. Coming to the camera department, it houses dual rear camera setup of 8MP + 0.3MP and has a 5MP selfie shooter on the front. All this is powered by a 3000mAh capacity battery.

Would you be buying a Coolpad Cool 3 in India? Let us know in the comment section below.