This situation has thus resulted in IPL fans getting glued to their smartphones streaming their favourite team matches on Disney+ Hotstar. To make the IPL watching experience more interactive, the streaming platform has introduced video calling to friends during the live stream of their favourite teams, which have reached the playoffs.

The streaming platform earlier has brought up several features that include WatchN’ Play for the Dream 11 IPL 2020. This feature enables users to bring in their social feed to interact with cricket fans nationwide streaming the ongoing IPL 2020 matches. Similarly, fans could also share selfies using ‘Hotshots’ and share quirky videos using ‘Duets’. These were also part of interactive features from Disney+ Hotstar for cricket lovers.

Disney+ Hotstar — ‘Watch with your friends’

That said, this new video chat feature requires fans to subscribe to Disney+ Hotstar VIP membership. Users can then add their friends by clicking the “start a video call” button for up to five members during Dream 11 IPL 2020 Live stream. During the video call, users will have an option to listen to the ongoing match’s commentary. They can customise their volume options as per their personal preference on the streaming devices. Which means, users can prefer their commentary to be loud instead of conversations or vice versa. 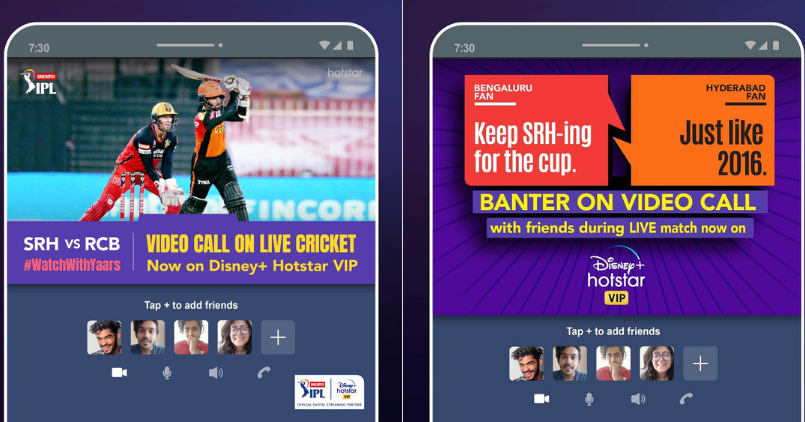 Users need to make a note, that this feature is only enabled in portrait mode during the live stream. Disney+ Hotstar also promises that there would be video synchronisation during the stream and video chat. This should make all the video call members witness the same feed at the same time, across all networks. There could be connectivity issues for some members during the video call. For this,  Hotstar enables ‘audio only’ option so that friends don’t miss the commentary of the ongoing IPL match.

As stated earlier, users would need to subscribe to VIP membership of the streaming platform to get this new feature. All the new and existing members can get access to the latest video chat feature. The Disney+ Hotstar VIP membership pricing starts at Rs 399, per year. This new video call feature ‘Watch with your friends’ is only available for Dream 11 IPL 2020 Playoff matches.