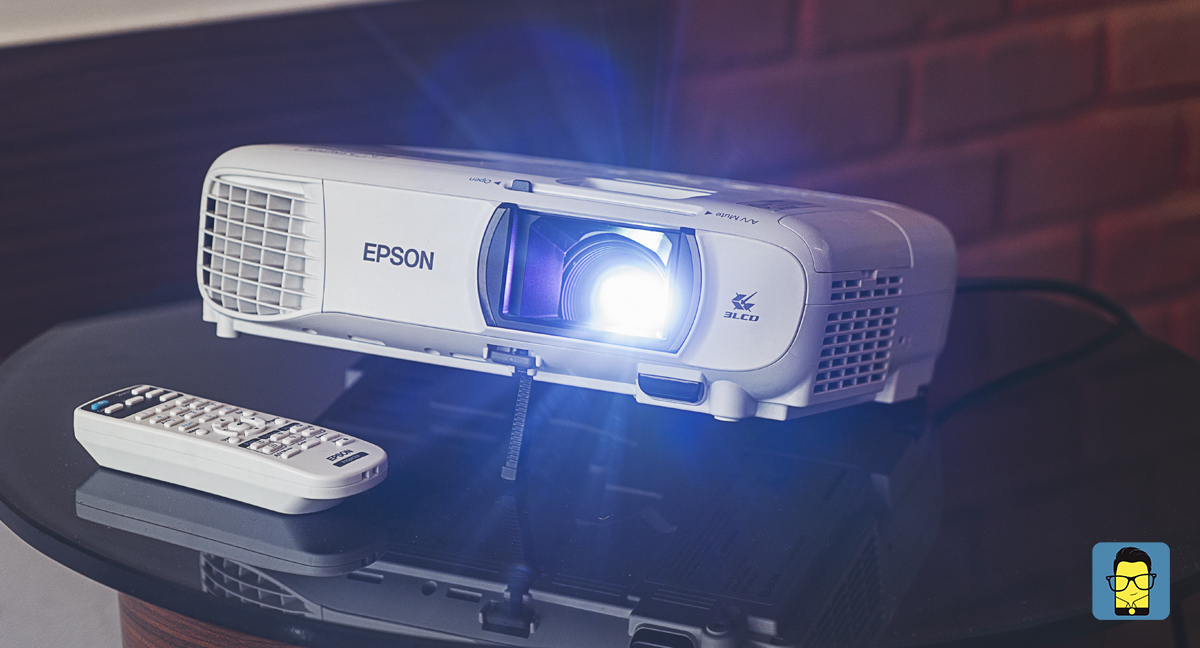 Over the years, televisions and projectors have seen discounts across them, quite heavily. That said, the former has pretty much neglected the need of the latter in most scenarios. In fact, I’ve personally always had the opinion that projectors can never replace TVs. Yes, they can be stretched to huge screen sizes, but they come with a lot of constraints. You must have a plain white wall, your room should have next to no lighting, and the bulb life isn’t that long. Which is why most users, including me, always resorted to buying a television instead of a projector. Well, that was until I tried the Epson EH-TW650. True story, I was saving up to buy a new television for my room, but after using this, I legit told the brand that I’m not returning my review unit. TLDR; the projector is actually that good. Read on, to find out just why. 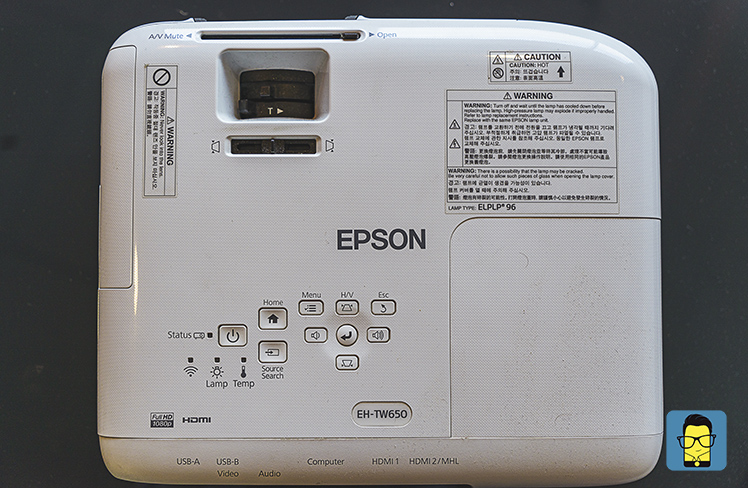 From the looks of it, the Epson EH-TW650 looks like your standard home projector. And that’s not really a bad thing. The projector is made out of plastic and comes in the standard white color variant. While it looks cheap at first, let me assure you that this thing is pretty damn sturdy. Well, it should be, for the price you pay for it. On the top of the projector, you have the slider for the lens. You also get a slew of buttons here to turn on the device, adjust the picture, change the source, etc. You know, the usual stuff. 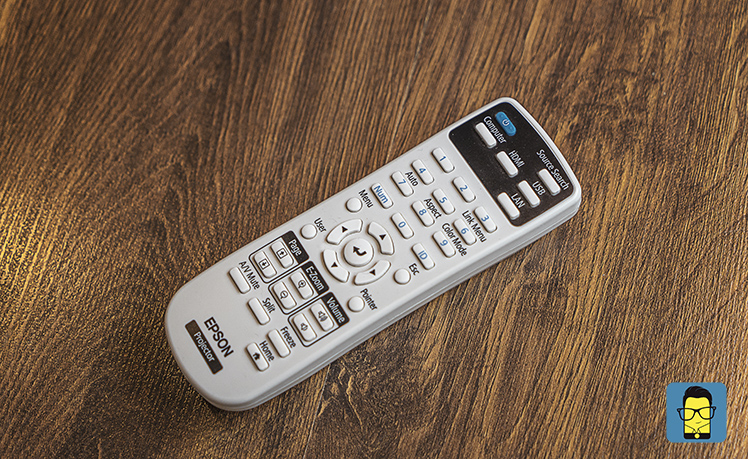 Alternatively, you can also use the handy remote to do all of that. To be honest, in terms of design, there is nothing that sets the Epson EH-TW650 apart from most of the mainstream options out there. That said, you don’t buy a projector for its design, you buy it for its performance. I’ll get to that bit in a while. 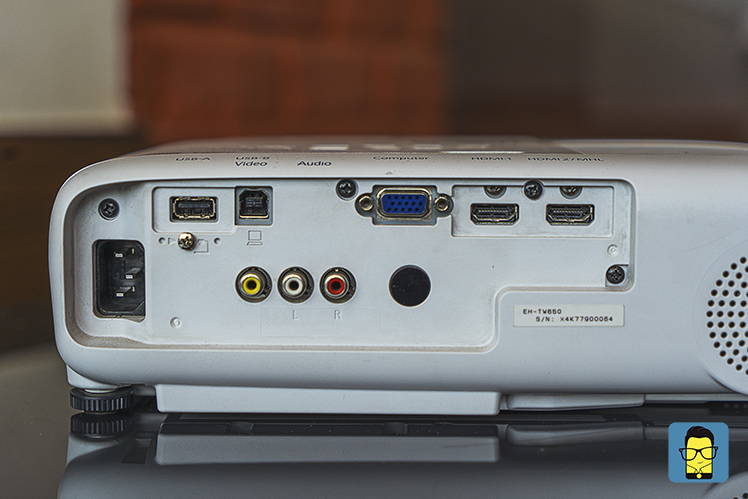 In terms of connectivity, the Epson projector does leave me hanging. It does come with most options you’d expect to get good video output, but the audio is a different story altogether. You get a USB-A port, a USB-B Video port, 2x HDMI ports, a VGA port, and the old school Composite RCA port. It is a 1080p projector, so this is pretty good. However, in terms of audio, you’ll have to rely on the RCA connection ports only. Personally, I would have preferred at least having a 3.5mm jack for easier audio output. Or, if you’re being too optimistic, you would have wanted an S/PDIF port. All in all, the audio department is a section where the Epson EH-TW650 gets you a bit disappointed.

Let’s talk about the main reason why someone buys a projector, which is the video output quality. In terms of screen size, this thing can go up to 80 inches, which is just freaking amazing. But what’s so unique is that despite being a 1080p projector, even on full-screen size, you hardly get to notice any pixelation. Such is the video output of this device. The Epson EH-TW650 comes with 3LCD technology, which promises better contrasts and better blacks. But what makes the projector amazing for me is the level of brightness offered here. So, the way projectors work, you need to have a focus on two sorts of brightness – white brightness and color brightness. Most of the budget offerings out there focus just on the white brightness while sacrificing the latter. Which is why you need to have a dark room, a white wall, and even then, live with the washed-out image. The Epson EH-TW650, on the other hand, has a White and Colour Brightness at 3,100lm. As such, you can use this projector even with the lights on, without worrying about the color of your wall. The only requirement here is that the wall should be plain, that’s all. 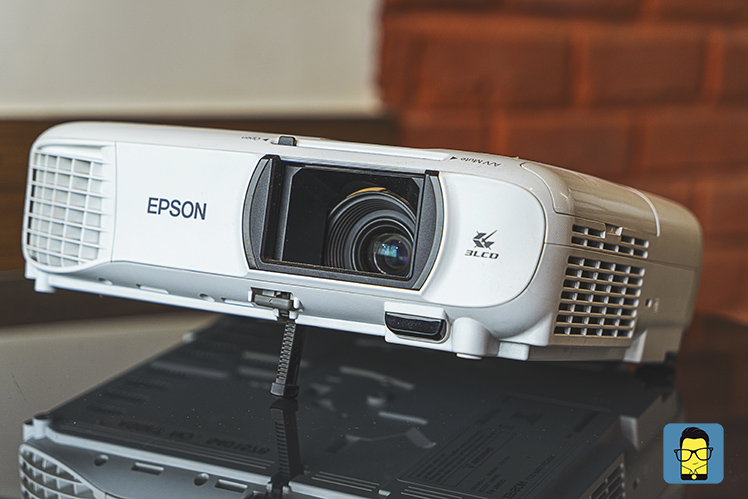 In my testing, I watched a couple of the matches of the ICC Cricket World Cup, while also binging episodes from Dark Mirror. Not once was I let down by the performance of the projector. The colors looked damn bright, and even while watching sports, there wasn’t any form of tearing which is good. I do game a lot as well, so I did try to use the projector with both my PS4 and my gaming rig. For the console, the projector works just perfectly. Honestly, playing Spider-Man on this big a screen, watching your player swing from building to building is an amazing experience. As for gaming it with my PC, the only let down was the 60Hz limitation. Considering that this is a 1080p display, I really wish that it was able to output at higher refresh rates so I could play PUBG and Battlefield on this as well without complaining. All in all, the video performance of the projector is just as advertised – amazing. 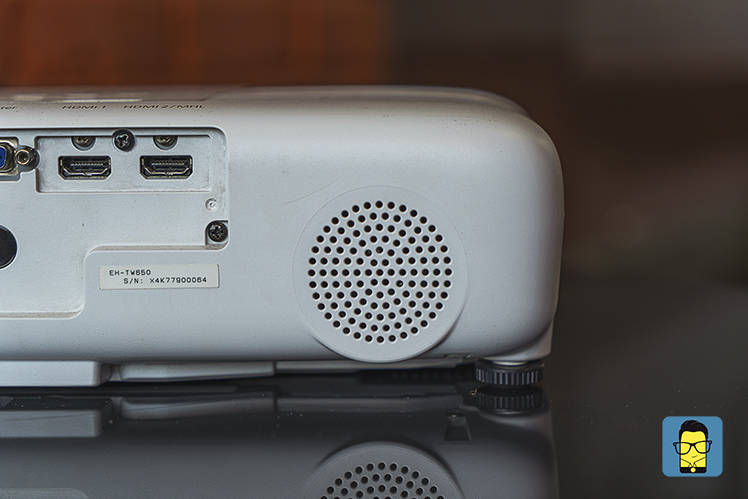 The reason why I’ve been complaining about the audio on this projector is ‘coz it is bad. I’m sorry, but it is honestly the biggest let down of the device. The mono speaker lacks not just quality, but also the volume. You would have to be sitting pretty close to the projector to actually hear all of the audio coming out of it. Which would not happen most of the times, because if you’re outputting the display at anything higher than 50-inches, you’d want to maintain a distance. What’s worse is that there aren’t any options for connectivity in the audio department. That said, the job of the projector is to output good video, not sound, which is why I won’t be deducting a lot of points for this.

My experience with the Epson EH-TW650 was pretty good, to be honest. The UI of the device is pretty user-friendly. While I do consider myself an experienced user, even my parents were able to use the device without much hassle. There are a lot of little things I really like about the projector. For starters, the height adjuster is pretty simple to use. I like this design as opposed to those twisting wheels on the rubber pads of the projector. Secondly, the screen adjustment here is a godsend. In the Epson EH-TW650, you just have to point the projector at the wall. The system will then automatically adjust its image according to the alignment and tilt of the bulb. That said, the focus is obviously going to be manual, so there’s that. 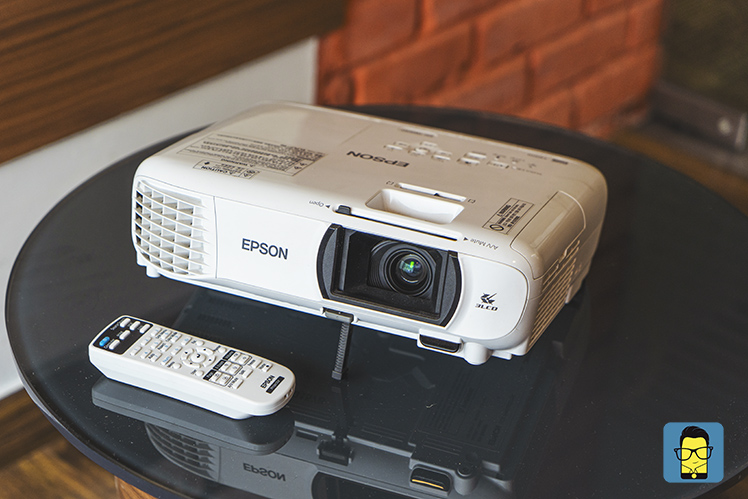 One complain that I do have with the Epson projector is the amount of heat that is outputted from this machine. To say that it is a lot would be an understatement. While the company assures that there is nothing to be worried about, you really cannot sit in the way of the thermal outlet. It gets blazing hot. Despite the company’s promises, in my head, I will always have this fear that if the AC would be turned off, the projector would eventually burn due to the heat it produces. Yes, that’s just me being paranoid, but yeah, it’s just to give you an estimate of how hot this thing can get.

Should you buy the Epson EH-TW650? 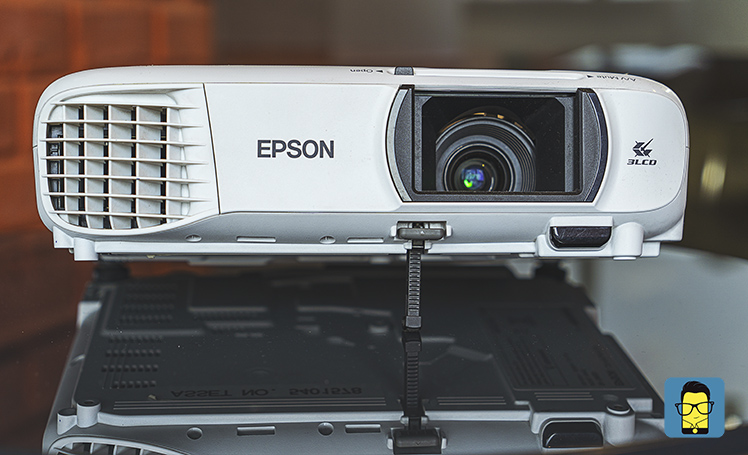 I think I’ve clearly established that I do love this projector, despite the couple of drawbacks it has. But the real question remains, would I recommend this to you? At a price point of roughly Rs. 57,000, the Epson EH-TW650 isn’t cheap. Heck, you can buy 4K LED TVs for half the price now. That said, the EH-TW650 offers you the versatility that a TV wouldn’t. You don’t need to allocate a dedicated space/mount for it, the picture quality is just as good, you can stretch it to the size of your liking, and it is darn easy to use. Truth be told, the Epson projector is just as good as a premium TV in this price segment. But what makes it really recommendable is the life of it. The bulb here comes with a promised life of 7,500 hours. What’s more, is that changing the bulb will only set you back less than Rs. 5,000. As such, if you’re looking for a projector to replace a TV, the Epson EH-TW650 gets my stamp of approval.