Phones have come a long way since their inception. They’ve had revolutionary features, and it has only gotten better with time. One of the key areas where we see most innovation is the security department.

There is always a better way of unlocking your phone than the previous method. Fingerprint sensors were one of the most popular inventions, which are widely used hardware species in biometrics.

They were the first sensors to be small enough to fit in a phone and be able to uniquely identify you. But they weren’t the first to try and break the norm of pin and passwords.

Back in the days of Android ICS 4.0, we had a feature in the screen lock settings. It was called face unlock.

You had to register your face with the front camera and put a backup pin or pattern. Next time when you want to unlock your phone, you have to look into the small window that opens up.

Of course, it wasn’t super handy. The lighting and stuff had to be bright enough for it to work at all, otherwise, it’ll just throw you the password prompt.

There were few additions like “liveliness check”, where it would tell you to blink to verify it really is you, and not a high-resolution photo of yours.

We’ve obviously outgrown that era and have moved on to iris scanning and other advanced authentication systems, but it’s always nice to look back at where it all began.

So here is a list of popular devices, which have facial recognition.

1. Nexus 4 (and many other Android ICS phones) 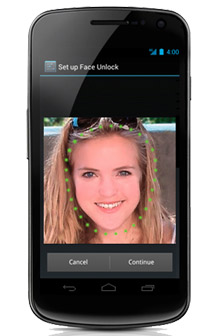 I listed the Nexus 4, as it was an exemplary Android smartphone to showcase ICS 4.0 stock OS. It had this feature where you could add a face in the face unlock option and have it recognize you. It wasn’t very accurate as mentioned earlier, but was definitely fun to have.

Galaxy S8’s facial recognition was in the news for the wrong reasons. It was found that the recognition model could be fooled by a high-resolution photo of oneself. However, practically the chances of someone managing to pull this off are fairly slim. Plus, it is much faster than the onboard iris scanner and easier to unlock than using the fingerprint sensor on the thing.

As mentioned earlier, the Galaxy S8’s features are obviously mirrored over to the Note 8 as well. The feature works fine but holds the same vulnerabilities as the Galaxy S8 facial recognition engine.

The most recent and most notable advancement made by a company in this field has to be Apple, with their FaceID on the iPhone X. It appears to be quite accurate, but we’ll have to get back on that once we have it among ourselves.

What other phones do you know which has facial recognition built in? Let me know in the comments. Also, if there’s any other thing which you’d like us to cover, drop us a line. We’ll get on it!