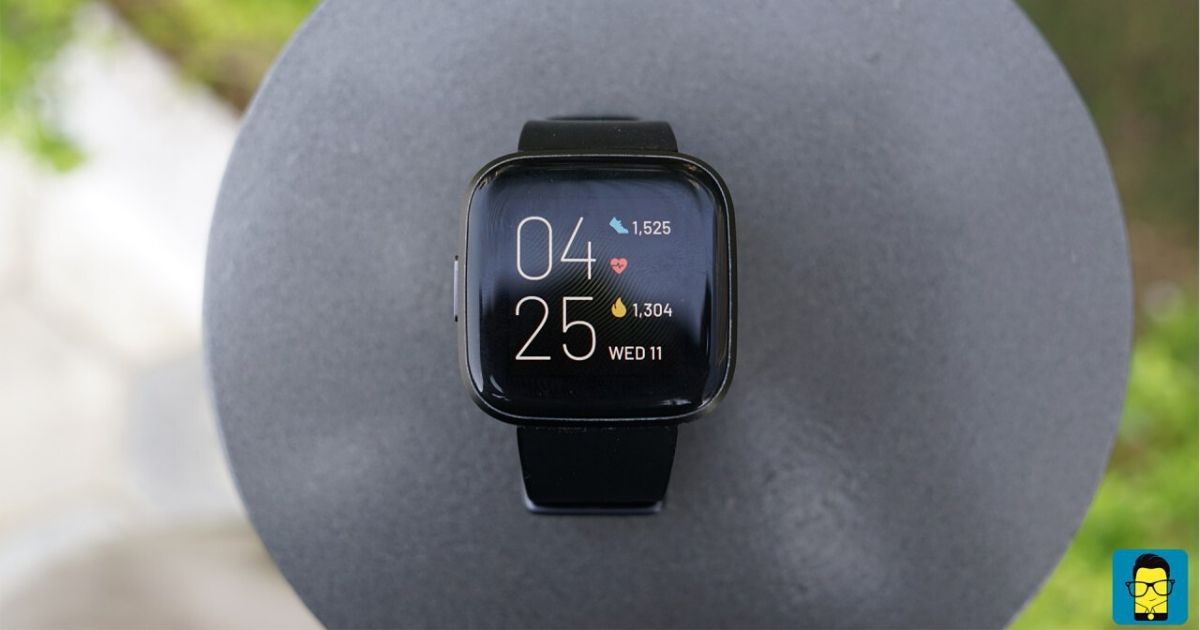 Fitbit’s trackers have been the go-to for fitness enthusiasts for quite some time now. However, with the advent of smartwatches, the company has seen its market share dwindle quarter by quarter. So much so, the brand recently got acquired by Google for a sum of $2.1 Billion dollars, a move which could pay dividends for the Mountain View giant down the line. I say this, because Fitbit undeniably makes quality fitness trackers which are somewhat lacking in the smartwatch department. Case in point, the Versa 2, which has been strapped to my wrist for the better part of a week and in this review, let’s see if it makes a compelling buy, or not.

If you’ve seen the first iteration of the Versa smartwatch, or even the Lite mode which was launched a while ago, then you can all but skip this section. The Versa 2 looks identical to its predecessors as it features the same square-ish dial with anodized edges and rounded-off corners. Moreover, despite its plain-Jane silicone wrist straps, the smartwatch still managed to turn heads quite often, which speaks volumes about the Versa 2’s good looks. 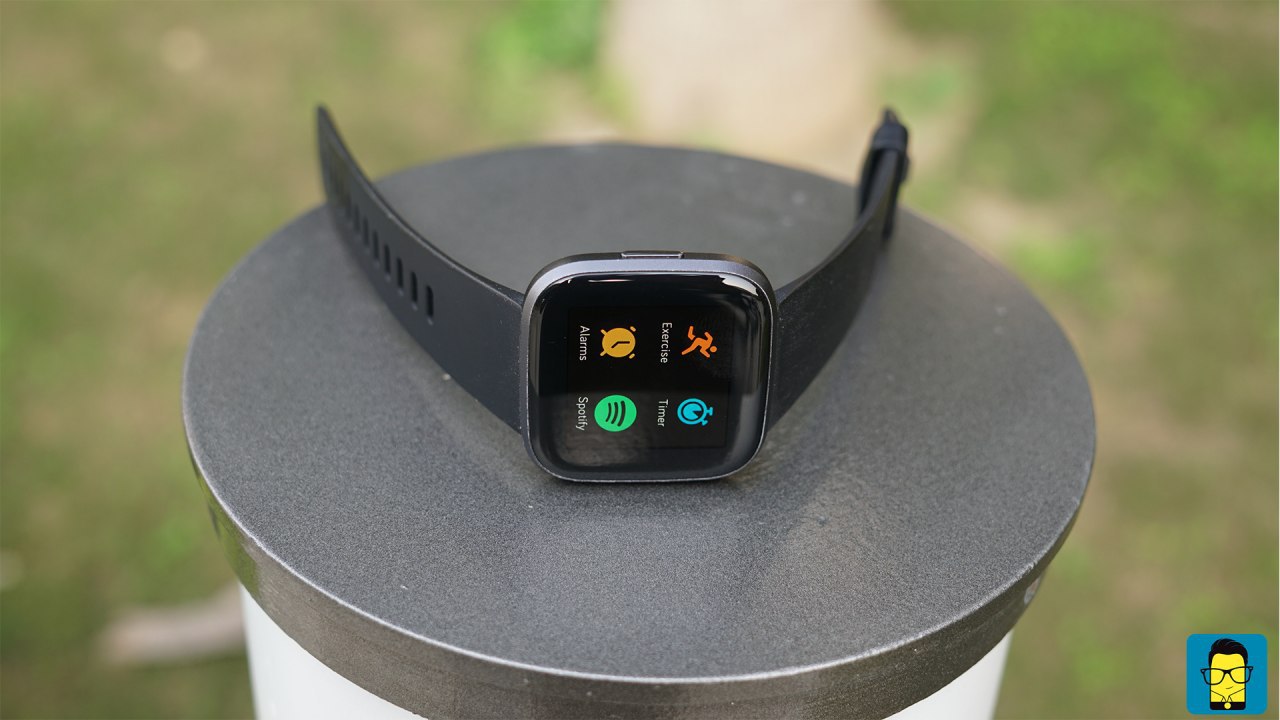 I’d also like to point out that the wearable is extremely comfortable to wear. So much so, I can count how many times I took it off on the fingers of one hand – I almost always wore the watch, even to bed at night. Notwithstanding that, the wrist straps stood the test of time, which is fantastic too.

Coming to the rest of the design features of the Versa 2, the smartwatch comes with a single multi-function button on its left fascia, which can be used to either invoke Alexa or go back to the previous page. You’ll get a heart-rate sensor on the underbelly of the smartwatch, along with a 4-pin connector which will be used to charge the Versa 2. 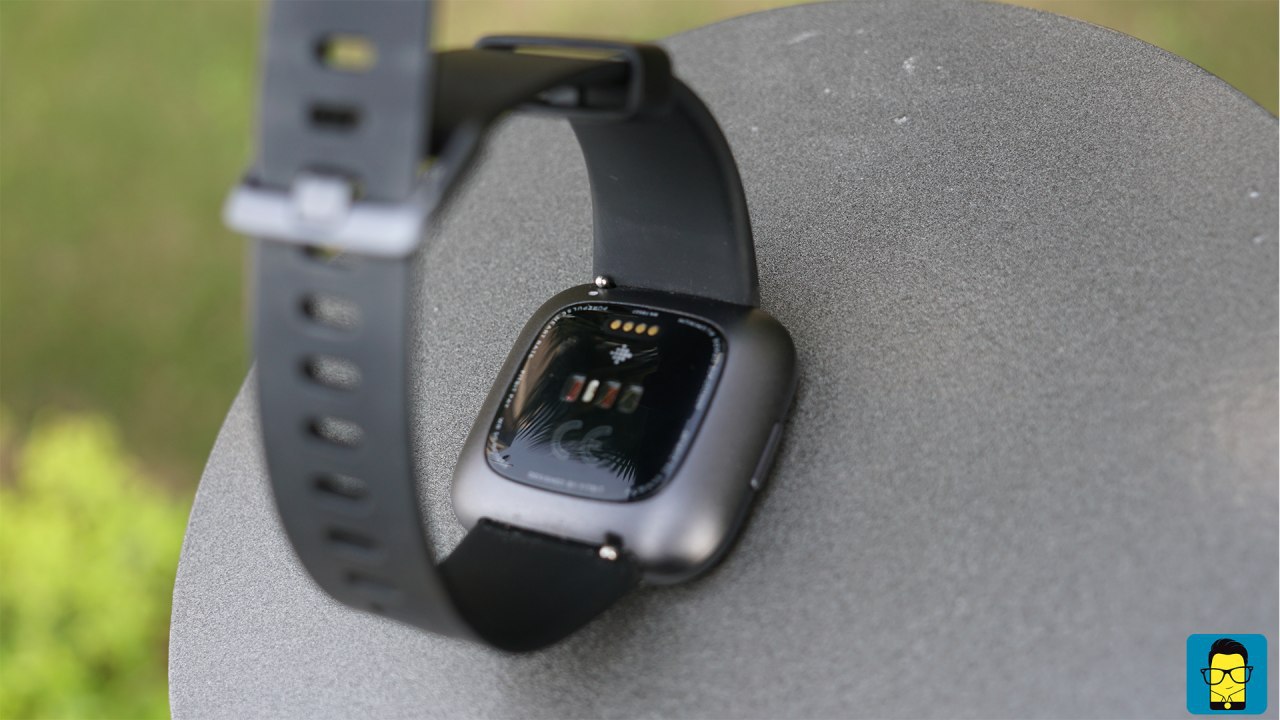 So, what sets the Versa 2 apart? Well, for one, the company decided to forego the ‘Fitbit’ logo on the watch’s bottom bezel to offer a slightly bigger display. As a result, the Versa 2 now features a bigger 1.4-inch panel. Now, the display is still surrounded by chunky bezels, but they’re fairly less prominent than they were on the OG Versa and Versa Lite models. Furthermore, the brand has used an OLED display on the Versa 2 which is a huge step up over the LCD panels of its predecessors. In a nutshell, the OLED panel paves way for deeper blacks, more vibrant watch faces and my personal favourite, always-on display functionality. The peak brightness levels and sunlight legibility of the display are on point too, so no complaints here.

Much like its predecessors, the Versa 2 also runs on the company’s proprietary Fitbit OS. On one hand, the UI is quite lightweight and therefore, feels smoother and less stuttery compared to most WearOS trackers. On the other, the software onboard the Versa 2 isn’t as feature-rich as the competition, nor does it doesn’t come with support for a multitude of third-party apps either. Moreover, Fitbit’s OS offers considerably lesser watch faces compared to smartwatches running Wear OS, Tizen or WatchOS too. 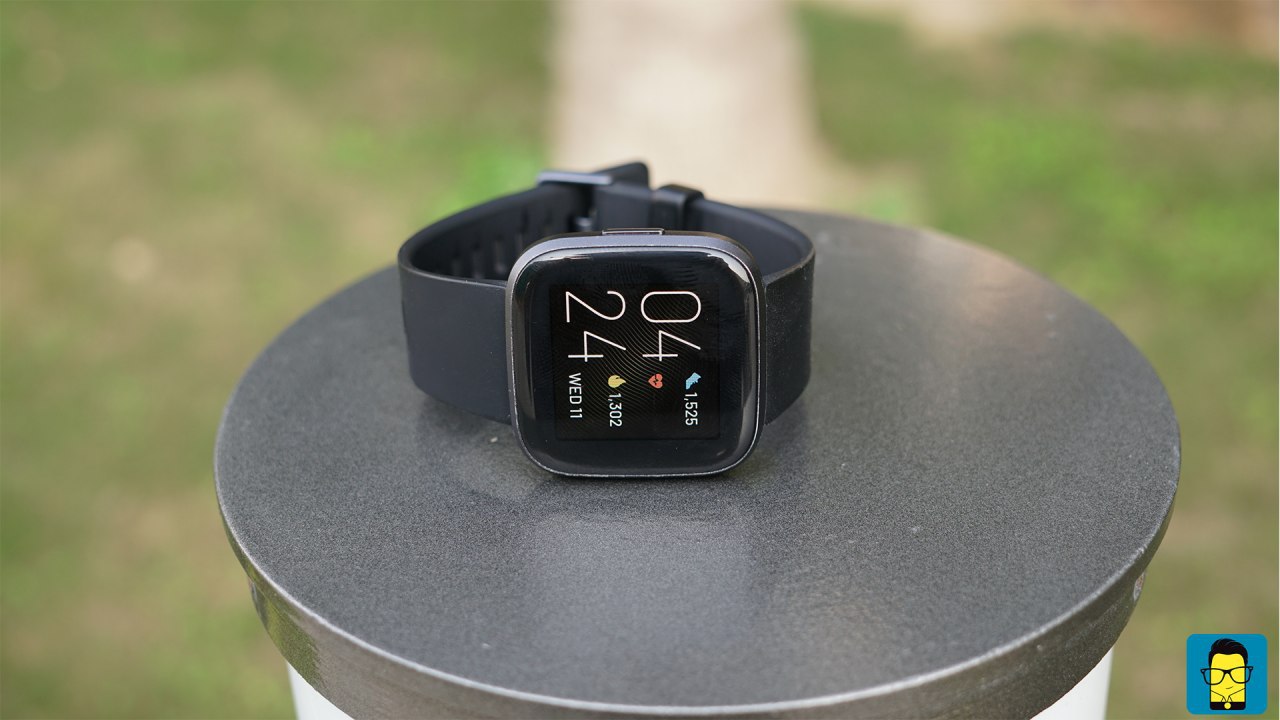 Be that as it may, getting around the smartphone’s interface is quite simple. A swipe to the right will bring you to the main app page, which comprises apps like Spotify, alarm, and timer. A swipe down from the top will bring up the notifications bar, along with a shortcuts tab which lets you access music controls, payments (currently not supported in India) and quick settings with the tap of a button. Lastly, swiping up from the bottom brings you to the ‘Today’ tab, which essentially has all your fitness stats like your steps along with your recent notifications on one page.

Coming to the smartwatch aspects of the Versa 2, the wearable allows you to revert to notifications without having to take your phone out. In fact, you can even customize replies for your default messaging app (WhatsApp in my case). The custom replies include both, text and emoji replies, which is neat. There’s also an option to speak into the built-in mic and use voice-based dictation to revert to messages. I’d also like to point out that I received the notifications on the watch in a timely manner, and the Versa 2 also lets you pick and choose which apps can push content over to its interface.

You can also install a bunch of useful apps on the smartwatch, including Uber and Spotify, along with games like Flappy Bird. Needless to say, gaming on a smartwatch isn’t ideal as your fingers will be fighting for space on the display. As for the apps, they work well, for the most part, however, I hope to see a broader selection on the platform in the coming days. Last but certainly not the least, the smartwatch is compliant with Amazon’s Alexa voice assistant and therefore, you can quickly check the weather, or ask the smartwatch to set a timer by holding the physical button and voicing your command into the microphone. All in all, the Versa 2 still has ways to go to establish itself as a do-everything smartwatch.

Much like most other smartwatches, the Fitbit Versa 2 also comes with a companion app. The app’s interface is quite minimalistic and tidy, however, it doesn’t come with a dedicated dark mode. Barring that, the app is quite user-friendly and lets you change the settings for your watch faces, update the software on the Versa 2 and install applications on your watch, among other things. 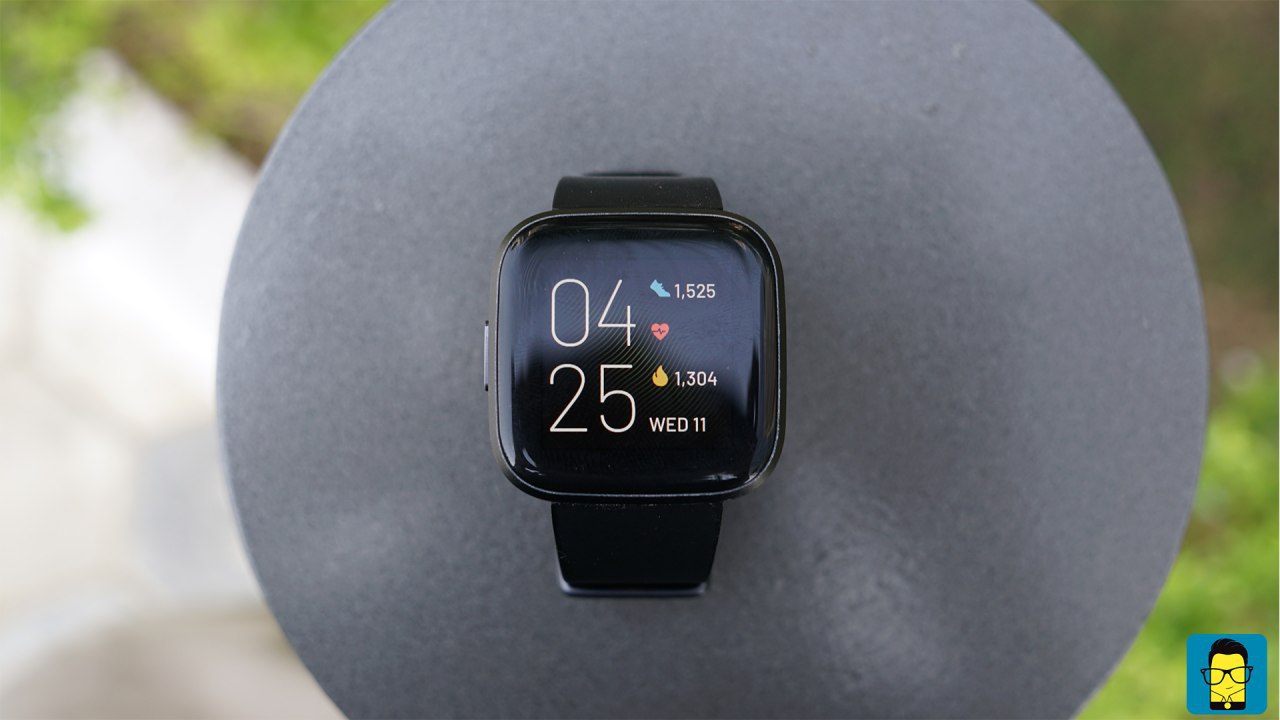 As for the fitness features, the Versa 2 can track a myriad of activities, including swimming, running and step-tracking. Going by the company’s pedigree, you’d be wise to assume that the wearable tracks fitness stats with little to no margin of error. I noticed that the watch seldom tracked ghost steps and it calculated the stats from my run in the evenings (pace and BPM) accurately too. I would’ve liked for the Versa 2 to ship with built-in GPS, as the watch relied on my smartphone to map the runs.

On the flip side, I really like how neatly the stats are presented on the watch’s companion app. And, if you’re serious about your workouts and health, then you can even opt into the brand’s premium service which has a ton of guided programs for buyers to choose from. Although, it’s disappointing that the company has locked it behind a paywall.

Thankfully, the wearable’s sleep tracking is among the best in the business and it’ll shower you with insights on your sleeping patterns. From the time you stay awake tossing and turning in your bed, to measuring your REM sleep and oxygen variations (useful to track erratic breathing patterns), the Versa 2 can track it all. There were times when the wearable didn’t give me consolidated metrics as my unit of the Versa 2 couldn’t get continuous heart rate reading. However, the instances were far and few in between and rest assured, if you want to better your sleeping habits, then the data combed by Versa 2 will surely help set you on the right track. 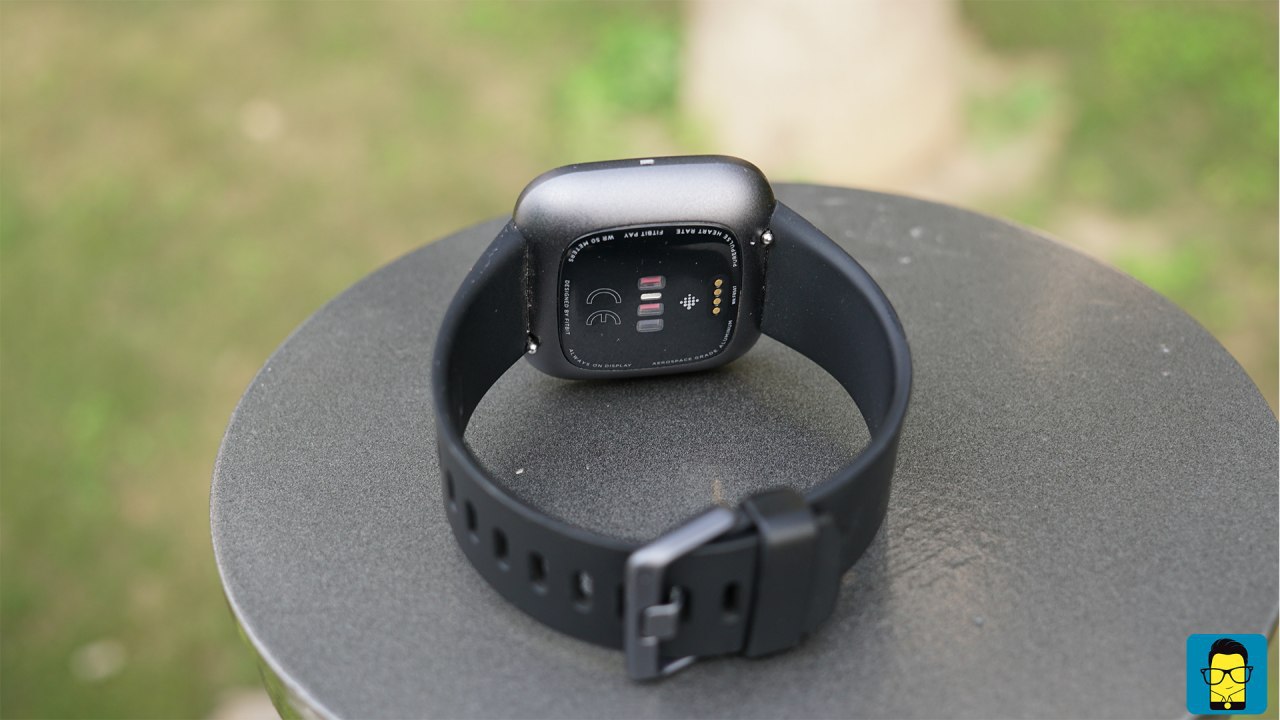 In a similar fashion, the Fitbit Versa 2’s battery life didn’t give me any reason to complain either. The smartwatch easily lasted me three days with the notifications and the always-on display enabled and if you think that’s less, then you should definitely steer clear of Samsung’s Galaxy Watch Active 2. Quite frankly, my only qualm with the tracker in the battery department has more to do with the bundled charger which feels quite cheap and flimsy.

The Fitbit Versa 2 retails in the realm of Rs 20K to Rs 23K and for the price, is an excellent purchase. Don’t get me wrong, Fitbit OS has a long way to go and the lack of built-in GPS could be a dealbreaker for marathoners. However, the Versa 2 is currently the best Fitbit you can buy and between its accurate activity tracking, good battery life, gorgeous display, and premium design, there’s a lot to like here. I’d also like to point out that Fitbit’s trackers are quite possibly the only wearables that work equally well on both iOS and Android platforms, meaning you don’t have to be in one camp to get the watch. All in all, Fitbit Versa 2 is a solid wearable which more than makes up for its shortcomings by offering consistent fitness metrics and reliable smartwatch experience.