Flipkart to launch a Motorola-branded TV on September 16 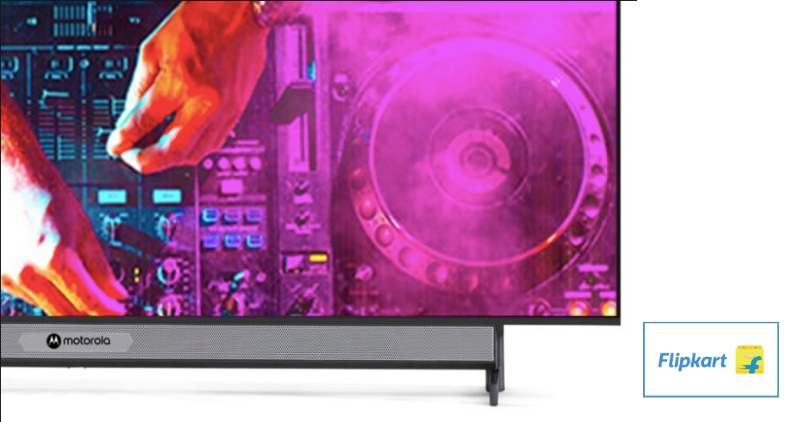 Flipkart, the giant e-retailer is all set to launch a Motorola-branded TV in India. You may not be ready for a Motorola TV yet, but you would probably be getting one on September 16, alongside the launched of Motorola’s new E series smartphone.

At the moment there’s not much know about this TV, and it seems like a closely traded secret that we have been hearing about this for the first time. No rumours, no leaks of sort came in for the supposed Motorola branded Television.

But what we know so far is that it is all set to come with a Soundbar attached to it. Unlike other TVs, which offers basic speakers or a set of slightly powerful tweeters with base. Whereas offering a sounder attached to your TV is a different ballgame, altogether, unheard before.

These days with the increase in popularity of the Smart TVs, many non-TV players have jumped to bandwagon or jumping. The most recent will be the OnePlus TV, which is said to arrive later this month. Further, Xiaomi is all set to launch a range of Smart Home appliances on September 17th. Where we expect the brand to introduce a new Smart TV as well.

Also read: OnePlus TV will come built-in with a Chromecast and all Google services

With increased demand, it is only fitting for Flipkart to make the perfect use of the Motorola branding to introduce a new range of TVs. Well, we don’t know if it will be a range, or just one single model to start. You’d have to wait for further details on this one.

Before you guys go! What do you think of a Motorola-branded TV? Would you be willing to buy a Motorola Television? Let us know in the comment section below.