Home | Phone Leaks  | Samsung Galaxy Note 9 appears in a new benchmark test; US variant of the phone to have 6GB of RAM

Samsung Galaxy Note 9 appears in a new benchmark test; US variant of the phone to have 6GB of RAM

Samsung is planning the release of the Galaxy Note 9 in August and the company has already started testing the device. A few days back, a report about the Snapdragon-based Galaxy Note 9 surfaced through Geekbench. Today, yet another listing on Geekbench has hinted on some specs of this phone.

The phone has been allotted the model number  SM-N960U as its predecessor was named SM-N950U for one of its variants. The Galaxy Note 9 shown in the listing runs on Snapdragon 845 and has 6GB of RAM. Since it runs on Qualcomm’s latest processor, we think that this is the US variant of the device. Back in March when we saw the device for the first time on Geekbench, it has the same processor and RAM configuration. Additionally, it came pre-installed with Android 8.1 Oreo. 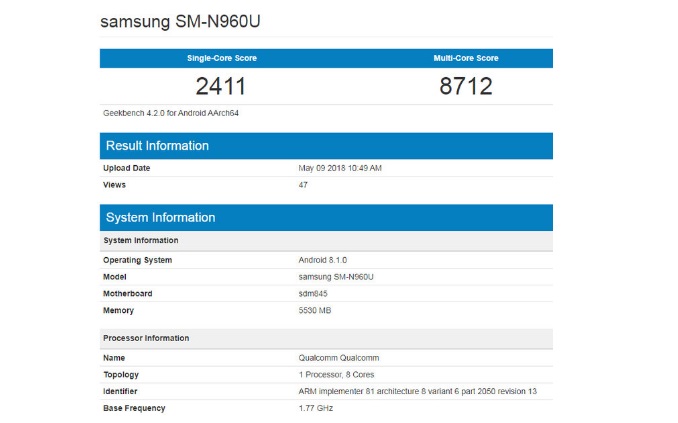 Generally, we do not expect a single leak to be credible. However, now that we have two leaks saying the same thing, there may be a truth to these specs. The benchmark listing also shows single-core and multi-core scores of the phone. They are identical to the Galaxy S9’s but this score has been given to a pre-production unit of the Galaxy Note 9.

A few days ago, an Exynos variant of the Galaxy Note 9 was benched on the website. We think that this variant will not arrive in the US but will cater to the South Asian markets. This variant will also carry 8GB of RAM instead of 6GB. We cannot expect many changes when it comes to design but we can surely hope that the phone is a worthy upgrade to the Galaxy Note 8.