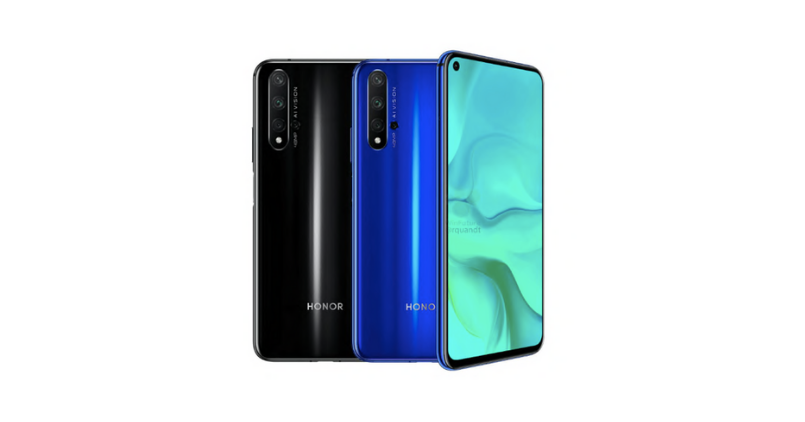 Honor is gearing up to announce its new flagship series for the year. Dubbed as Honor 20 and Honor 20 Pro, the new upgrades are said to officially arrive in London on May 21. While the company recently unveiled its India launch details as well. We talk about that below along with the leaked specifications and renders.

Just a week before its official unveiling in London, the handset has been leaked by WinFuture website. We now have the first clear look at what to expect coming next week. The primary feature that you’d notice is that it will be packing a quadruple rear camera setup. Thus, we will be expecting that they would be taking the photography to the next level from its predecessor.

The Honor 20 is said to arrive in two colours including Sapphire Blue and Midnight Black. Further, the phone will be bringing the punch-hole display design to its series. Earlier this year, the brand unveiled Honor View 20 with that punch-hole design. It will be sporting a tiny chin at the bottom.

This new Honor phone is believed to pack Kirin 980 SoC, which we have seen on the Huawei P30 Pro as well. The handset is tipped to come with at least 6GB of RAM and 128GB internal storage. The display is supposed to be a 6.26-inch LCD panel with full HD+ resolution.

Coming to the camera department, expect a 48MP primary sensor (Sony IMX586) with f/1.8 aperture. The secondary lens could be of the 16MP resolution, an ultra-wide lens. The other two lenses are believed to be of the 2MP resolution, where one would be utilised for macro optics, and other would be for depth sensing.

The selfie camera is believed to be of the 32MP resolution, which would be competing with the likes of Redmi Y3, and Samsung Galaxy A70. As far as the selfie camera comparison is concerned.

The Honor 20 will be coming with 3750 mAh with SuperCharge fast charge support. It is believed to be charging the phone to 50% within 30 minutes. Note that the phone would be running on the Android 9.0 OS based EMUI 9.0

Honor is coming to India with its Honor 20 series on June 11, which is less than a month’s time from today. With OnePlus series announced yesterday, it will soon be competing with the new flagship OnePlus series.

Would you be interested in waiting for the upcoming Honor 20 series? Or would you opt for a OnePlus 7 series phone? Let us know in the comment section below.