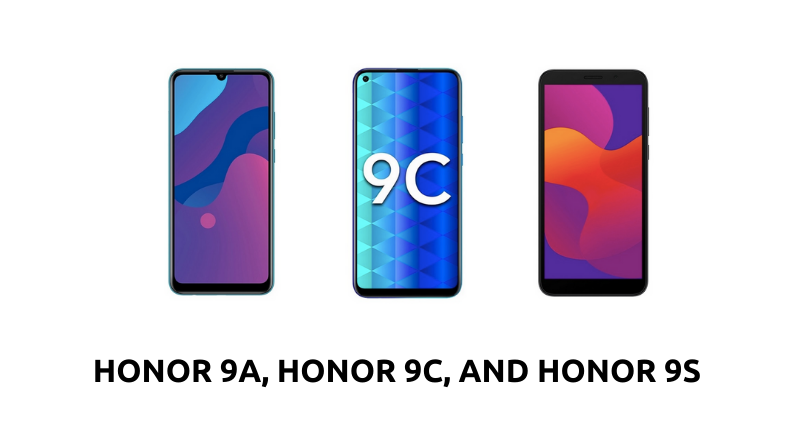 Honor’s all-new budget series of smartphones are launched. The company has announced three smartphones today including Honor 9A, Honor 9C, and Honor 9S. These new phones will be available for purchase on the company’s Russian website starting May 4. It’s unknown if and when India will be receiving these handsets or not. Let’s talk about the specifications and pricing of the new Honor phones.

Honor 9A – Specifications and Pricing

On the camera front, it has a triple rear camera setup. The primary lens is a 13MP module, the secondary lens is a 5MP module, and tertiary is a 2MP module. All this is powered by a 5000mAh capacity battery.

The Honor 9A price in India starts at Rs 11,500 approximately, which is RUB 10,990 for Russians. It will be available in three colours, Blue, Green, and Black.

Sporting a 6.39-inch HD+ resolution display with a pixel density of 269 PPI. The handset is powered by a Kirin 710A processor with Octa-cores and a clock speed of 2.0 GHz. It comes with a 4GB of RAM and 64GB of internal storage.

The camera department packs a triple rear cameras setup. Where the primary lens packs a 48MP resolution with f/1.8 aperture, an 8MP secondary sensor, and a 2MP third sensor. For selfies, it has an 8MP resolution sensor with f/2.0 aperture housed in a punch-hole design.

Sporting a single 8MP sensor on the back with an f/2.0 aperture lens, and a 5MP snapper on the front for selfies. The phone weighs 144 grams and has a thickness of 8.35mm. It will be running on Magic UI 3.1 based on Android 10.