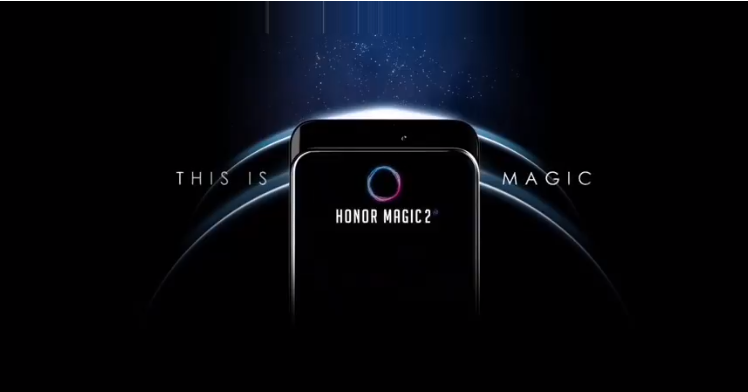 Huawei is launching a slider smartphone soon in the market. The Honor Magic 2 will have a purely bezel-less display and the camera setup would be embedded in its slider. Earlier, we saw an official teaser of the phone and from there, we know that the phone will launch on October 31. A new official video teaser meant for a TV ad in China has been leaked on the internet showing the Honor Magic 2.

Also read: Honor Magic 2 with Kirin SoC to be unleashed on October 31st

The video doesn’t give much about the phone and we just see some impressive colours and preppy music. The slider of the phone, however, has been paid some extra attention. We see it being pulled up and a “pop” like sound in the video attracts even more attention. At the starting of this video, we see the dual rear camera setup of the Honor Magic 2. The setup is arranged vertically on the left side of the back panel.

One interesting observation we made was the absence of any physical fingerprint sensor. The device might come with an under-display reader and if this is the case, the Honor Magic 2 would be “magic” indeed. The in-display readers are generally seen on the OLED display panel and hence, we can speculate the same for this phone.

Specs-wise, we do not know much about the phone as it hasn’t been certified by TENAA yet. However, an earlier rumour revealed the presence of the upcoming Huawei HiSilicon Kirin 980 octa-core processor on the Honor Magic 2. The phone would also have a 40W fast charging while some rumours suggest a graphene battery will allow the handset to retain 100 per cent more charge than lithium-ion. The Honor Magic 2 was very briefly shown off at the IFA 2018 event in Berlin and it did surprise us pleasantly.

Well, we are still in doubt about many things when it comes to Honor Magic 2. Thankfully, the launch isn’t far away. What would you like to say about this phone? Let us know in the comments section below. Stay tuned to Mr. Phone for more updates.