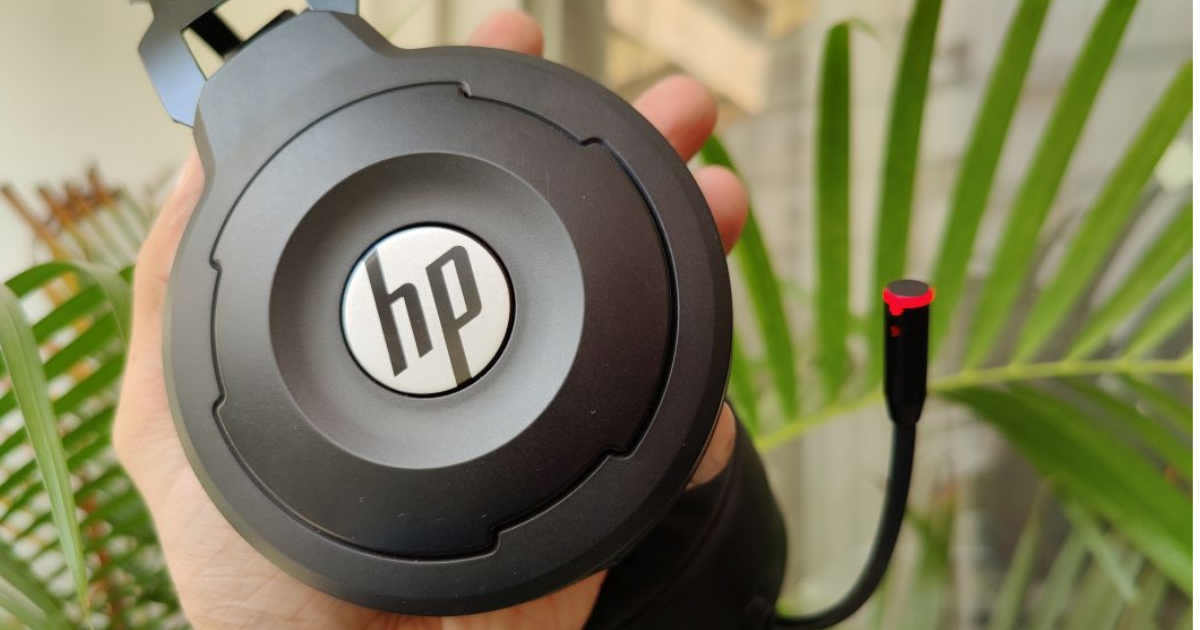 I’ve been gaming an awful lot these past few weeks and as much as I appreciate having a powerful GPU/CPU combo for the best possible frames, I also have a new-fond admiration for quality peripherals, chief among them being gaming headphones. And, of all the brands that come to mind, HP has made a really strong push into the gaming segment in India and recently, the brand announced the HP X1000 Wireless gaming headset. I’ve spent over three weeks with the pair and if you had your eyes set on one, then read on to know if they’re worth your hard-earned bucks.

I won’t beat around the bush at all – the HP X1000 Wireless Gaming headset doesn’t score big on style and is quite possibly, the most workaday-esque headphone I’ve laid my eyes on. In fact, from a distance, this could easily pass for a generic Bluetooth headset from the brand – which they made sure everyone knew about as this gets two ginormous HP logos on both the earcups. I think HP could’ve been a little more subtle with the branding here. 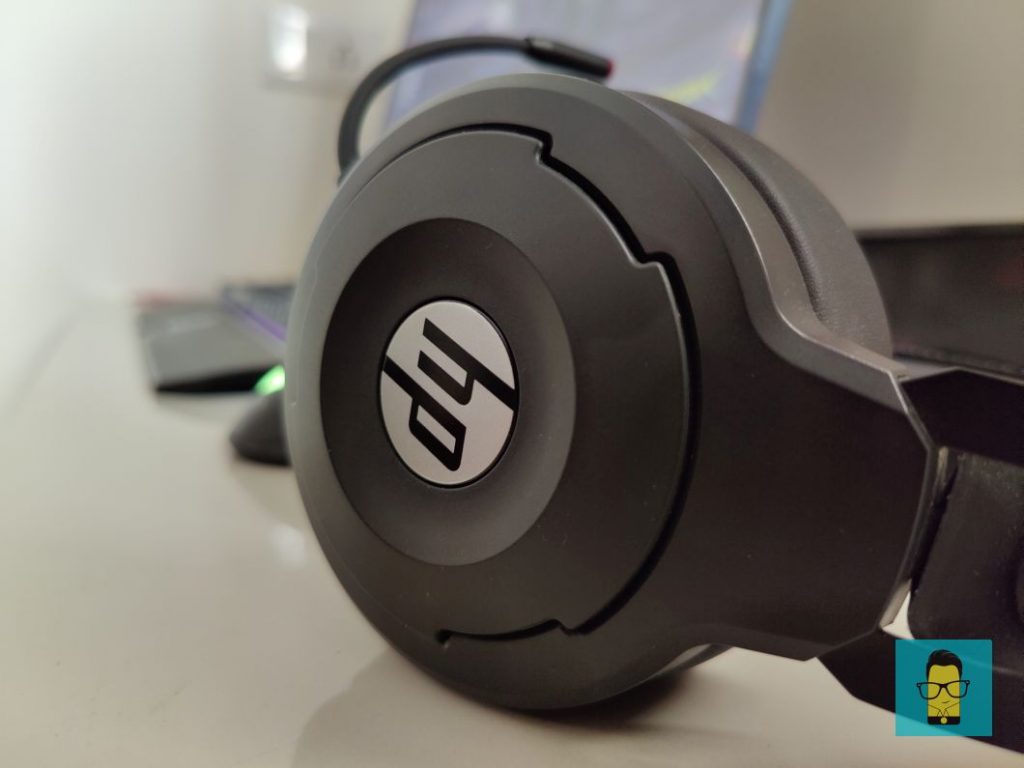 That being said, I don’t think the HP X1000 looks bad – in fact, the unit’s all-black colourway imparts a stealthy look to it which I’m sure will be applauded by minimalists. I’d also like to add that I personally don’t like RGB on my headphones and therefore, the lack of colourful LEDs on the X1000’s earcup’s didn’t irk me either. Furthermore, up close, the HP X1000 leaves no stone unturned and feels superbly premium, not just in the hand but to wear too. The unit has been constructed in parts using metal and plastic, and the combination lends the X1000 a robust build which isn’t too burdening on the head. It’s not as light as the Hyper X Cloud Stingers I reviewed a while ago but at 340grams, it’s not uncomfortably heavy either. 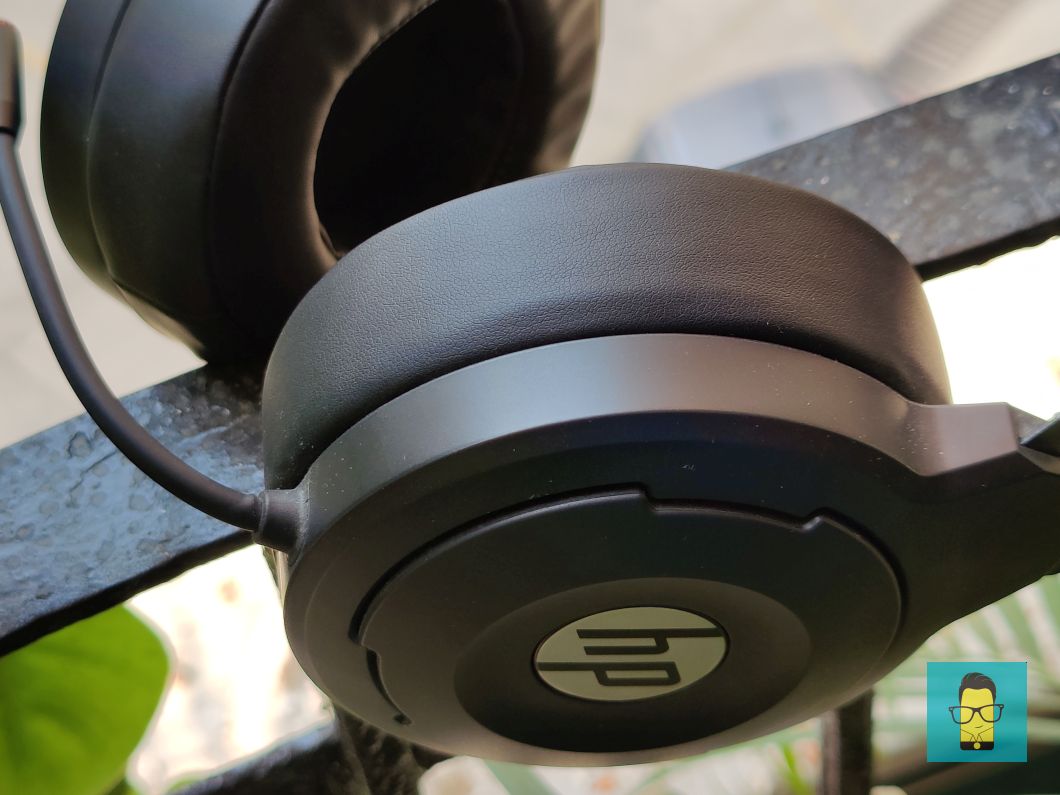 Another reason why the X1000 is so darn comfortable is owing to its earcups extremely plush padding. Furthermore, there’s some cushioning present on the headband too and since it doesn’t directly connect to the brace holding the two ear cups together, I didn’t feel it bite into my head either. What I will say though, is that the clamping force is a little too tight for my liking and while I did get acclimated to it after spending some time with the headphones, it’s something you should make a note of before buying this particular headset.

As I mentioned previously, the HP X1000 is a wireless headset – the company’s first 2.4GHz headset, in fact. So, it goes without saying that you get a dongle with the unit which is cleverly hidden inside the left earcup. To access it, all you need to do is unsnap the plate with the HP logo and take the dongle out – quite convenient, if I say so myself, as it makes it easy to stow away the dongle when not in use. Moving on though, the rest of the I/O can also be found underneath the left earcup, including a scroll wheel to increase or decrease the volume level, a power button, and a toggle to mute the microphone. 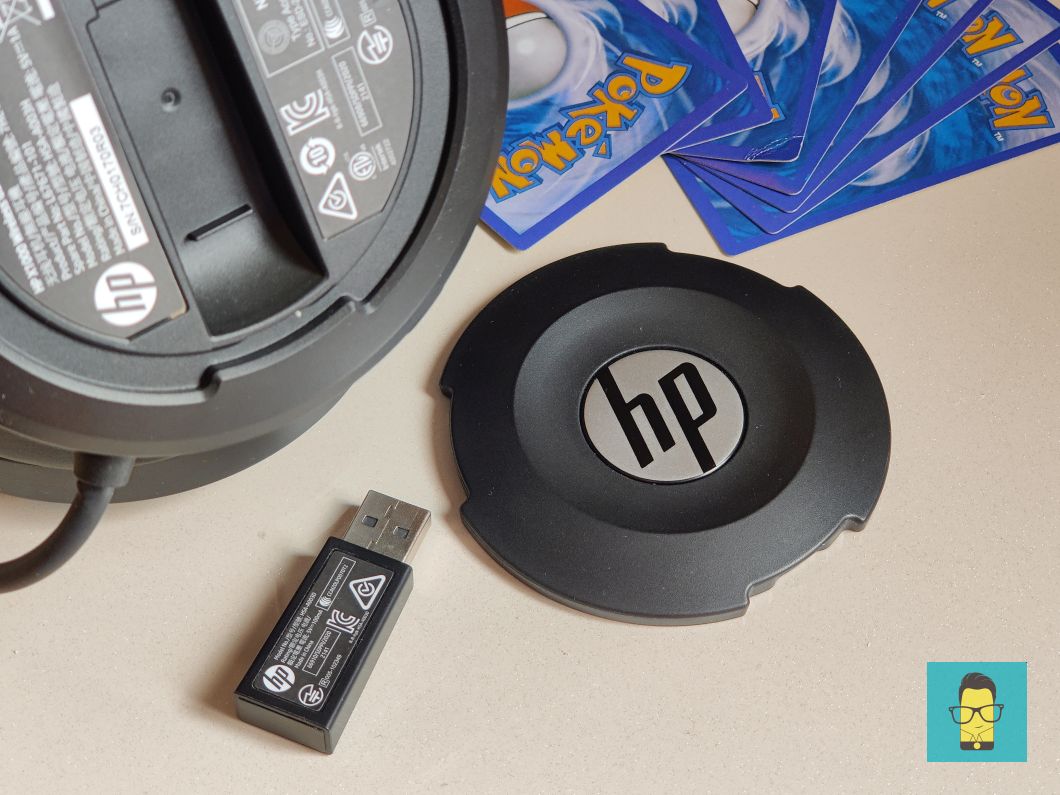 Speaking of which, the HP X1000 features a built-in, non-detachable mic on the left earcup. Now, a couple of things to note here – firstly, the microphone is adjustable and you can swivel it up, down, bring it closer to your mouth or move it farther away, the works. Secondly, there’s an LED that will glow red whenever you mute the microphone, and lastly, the quality of audio from the built-in mic is fantastic. My voice was relayed clearly over to my teammates, so rest assured, the X1000 Wireless handled in-game comms perfectly.

Now that we’ve established that the HP X1000 gaming headset feels premium and is satisfactorily comfortable to wear over extended gaming sessions, let’s talk about its performance. I tested the unit across a myriad of different games in an attempt to better understand its sonic profile, including popular Battle Royale games like PUBG PC Lite as well as Apex Legends. Suffice it to say, if you’re heavily vested in the BR genre, then you’d want your next gaming headset to offer unparalleled spatial awareness and that’s exactly where the X1000 shines. Not only was I able to pin-point the direction of an enemy’s encroach in Apex Legends, but I could also tell which in-game character was leading the charge. So, be it Octane’s suspension-laden legs or Caustic’s heavy, thumping footsteps, the X1000 was able to decipher it all. 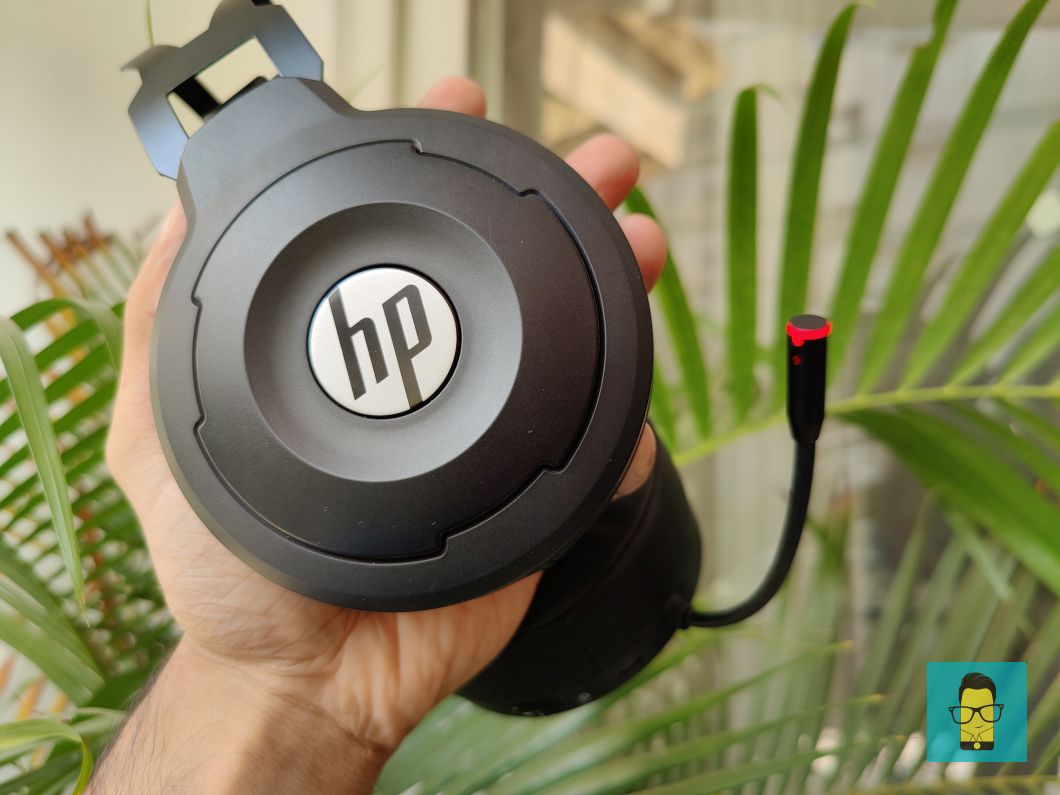 Similarly, in PUBG PC Lite – a game that I’ve only recently started playing – the X1000 gave me a much-needed edge over the otherwise experienced competition and I could tell if a player is in my building, outside it or above me, on the roof. Flip the page over to more cinematic titles like Genshin Impact and you’ll revel in the cheery in-game music and enjoy Paimon’s witty (and at times crass) dialogues to the fullest on the X1000 too. 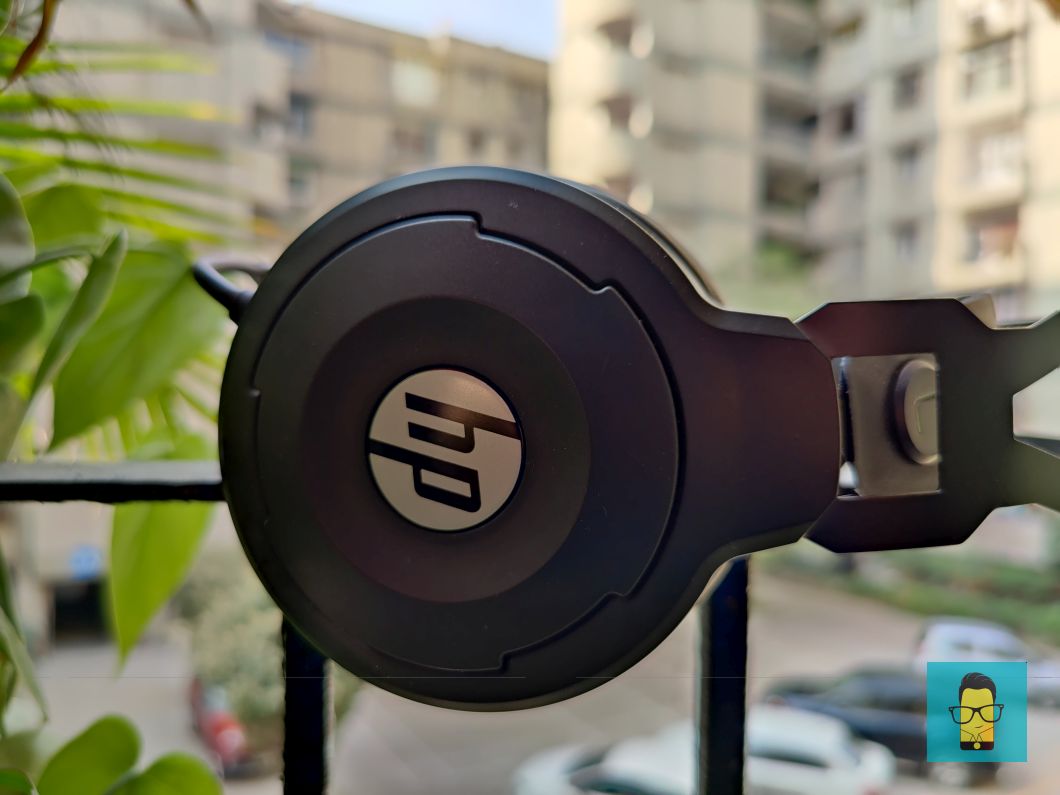 Now, you can use the headphones to listen to some tunes too, however, the X1000 can’t hold a candle to a pair of cans geared towards music. The sound signature sways in the favour of the low-end frequencies and the excessive rumble in the beats interferes with the rest of the frequency spectrum. You can somewhat tweak the EQ by pairing the headphones to the company’s Omen Command Center app but try as I might, I couldn’t get the reverb in the low-end to go away. Thankfully, the headphones delivered where it mattered the most and offered excellent battery life. In my testing, I was gaming around 14 hours between charges, which is a phenomenal number. Unfortunately, the unit ships with a micro-USB port for charging which in 2020, seems quite archaic.

The HP X1000 Wireless gaming headset costs Rs 8K, however, you can pick it up for Rs 6,200 from the company’s website. For its discounted price, the X1000 Wireless makes a strong case for itself and offers outstanding battery life, satisfactory in-game audio, and a comfortable design that is void of any wires. Therefore, if you have been on the hunt for a wireless gaming headset, do give the X1000 a shot – it’s worth every penny.