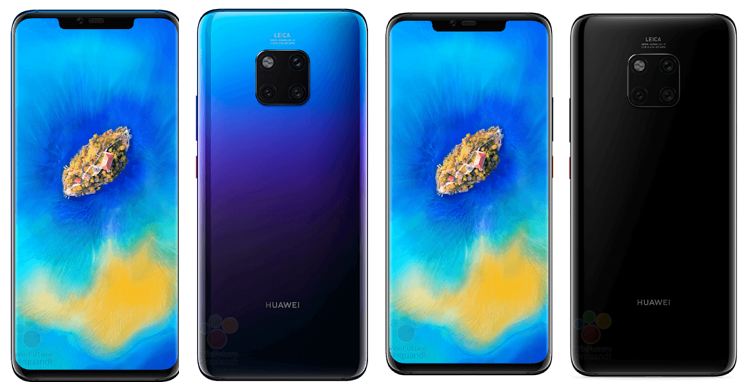 Huawei is gearing up to introducing its fastest smartphone in the market. Earlier this month, the brand teased on its Twitter handle about the new Mate series handsets. Where the Mate 20 Pro would be treated as a flagship handset with premium features. The new leaked specifications and price adhere to such a statement from Huawei. According to Ben Geskin, a popular leakster that goes by @VenkyGeskin1 says, it will retail starting at $999.

We recently got to see how the new Huawei Mate phone would look like as the press renders appeared online. Starting with the display, the new phone seems to sport an OLED panel of QHD+ resolution and 6.3-inch in size. Further, it will have an in-display fingerprint sensor and a 3D Face Scanner on front.

As far as the internals are concerned, it will pack the latest Kirin 780 processor, which is Huawei’s in-house 7nm processor based chipset. It will be directly competing with the A12 bionic chipset that Apple launched on its new iPhone XR, XS, and XS Max.

Talking about the camera, the new Huawei phone will sport a triple rear camera set up in a square arrangement. It is believed to offer a Cinema mode with 21:9 aspect ratio shooting support. Further, support of filters, tracking and AI support.

Huawei is also believed to be introducing stereo speakers on its next flagship smartphone. All this is claimed to be powered by a massive 4200mAh capacity battery with SuperCharge 2.0 support. Which means it shall charge the Mate 20 Pro to 70% in 30 minutes. Interestingly, the new handset could introduce 15W fast wireless charging.

How do you like these Huawei Mate 20 Pro specifications? Let us know in the comments section below. Stay tuned in to Mr. Phone for more awesome tech news.