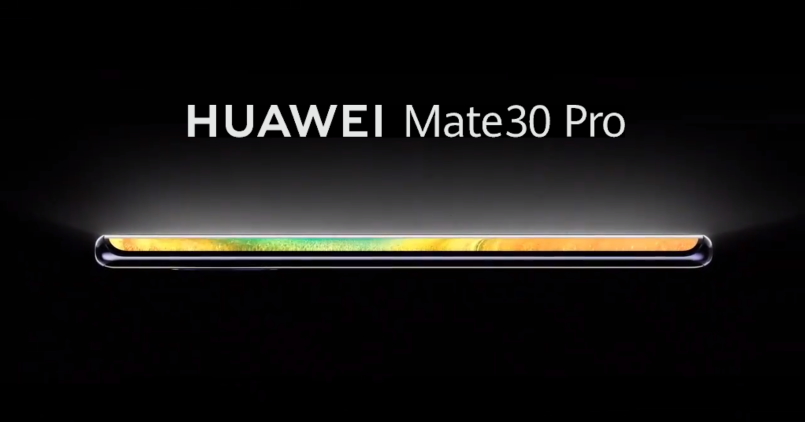 Fresh off the launch of the Apple iPhone 11 series which the company claimed to be the best camera smartphone, we have the Huawei Mate 30 series. The Chinese giant launched the Mate 30 Series at an event in Munich, and the phones come with a clear focus on camera optics. However, that’s not all, since the devices offer probably the best package through and through. Announced at the event were the Mate 30 and the Mate 30 Pro, along with a special Porsche Edition. So let’s see what the devices are all about.

Let’s talk about the smaller brother first. To be fair, it is smaller only in terms of the name and price but instead boasts of a bigger display than the Pro variant. The Mate 30 comes with a 6.62-inch OLED panel with a resolution of 1080 x 2340 pixels. It supports HDR10 and DCI-P3. However, the screen here is a flat design with a slightly smaller notch. Under the hood, the device is powered by the Kirin 990 SoC and is coupled with 8GB of RAM and 128GB of internal storage. The device also comes with a rating of IP53 to protect it against dust and water. The device will be available in four colors: Black, Space Silver, Cosmic Purple, and Emerald Green.

In terms of cameras, the Mate 30 is no slouch. You get a 40MP Super Sensing camera, similar to the P30 Pro, with a massive 1/1.7″ 40MP sensor with RYYB color filter and f/1.8 aperture. The secondary sensor is a 16MP (f/2.2) ultrawide sensor. There is also an 8MP telephoto lens that offers 3x optical and 5x hybrid zoom. Up front, you get a 24MP shooter for selfies.

Let’s talk about the main attraction of the show now – the Mate 30 Pro. The Huawei Mate 30 Pro comes with a 6.53-inch FHD+ OLED display with a resolution of 2400×1176 pixels. The display also boasts of DCI-P3 color gamut. What’s unique about this display is that it offers a curved edge which Huawei calls “Horizon Display”. The screen also resonates to produce the sound, owing to the Screen Sound technology. And that’s not all. Making full use of the curved display, Huawei placed a number of virtual buttons on the sides, including volume buttons and a shutter key for the camera. Under the hood, you get the flagship Kirin 990 SoC coupled with 8GB of RAM and 256GB of storage. There’s also a graphene film carries the heat away from the chipset to keep it cool. The device is also IP68 rated water-resistant.

The highlight of the device is the camera setup. Easily, the Mate 30 Pro offers the most powerful camera setup out there on a smartphone. It has the same 40MP Super Sensing camera from the P30 Pro along with another 40MP ultra-wide cam, which Huawei calls the Cine Camera. The main camera has a 1/1.7 sensor and an f/1.6 aperture. The Cine camera has a 1/1.54″ sensor with 3:2 aspect ratio and an ultra-wide lens with f/1.8 aperture. Both the sensors can use the 3D ToF sensor to render bokeh in videos. There’s also a third camera which is an 8MP telephoto shooter with a 3x optical zoom (80mm focal length) and 5x optical hybrid zoom. In terms of videography, the device can shoot at 4K@60fps. However, for slow motion, the device can go as slow as 720p@7,680. There’s also a 32MP shooter up front inside the notch for selfies.

Speaking about the notch, there’s a dedicated sensor to recognize hand gestures. Users can use it to scroll the display as well as take a screenshot by making gestures. And that’s not all. The NPU inside the device works with the front camera to track your eyes. As such, it offers features such as Auto Rotate that automatically rotate the display’s orientation based on the way you’re looking at it. You also get AI Security, in which if the camera detects more than one face, it will automatically hide your texts to preserve privacy.

We just took gestures to a whole new level.
Command your phone without even touching it, with smart gesture control.
See the magic happen with the #HuaweiMate30 Series#RethinkPossibilities pic.twitter.com/Df3JoXLGDS

The device has a bigger 4,500mAh battery. In terms of charging, it also supports 40W fast charging and 27W wireless fast charging. Huawei also launched a 40W power bank, a 40W in-car wired charger, a 27W wireless charging pad, and a 27W wireless car charger along with the device to ensure you can charge it at max speeds, even on-the-go. Also, apart from the aforementioned 4 colors, the Mate 30 Pro will also be available in a special vegan leather edition. It will come in an additional two color variants of Orange and Forest Green.

Huawei has once again partnered with Porsche Design to create a special edition of the Mate 30. The Porsche Design Huawei Mate 30 RS comes with a premium leather design on the back, with a strap that offers grip and also doubles up as a stand. The device is configured with a whopping 12GB of RAM and 512GB of internal storage. It will be available in 2 color variants – Red and Black.

Enjoy the power and exclusivity of #HuaweiMate30RS, crafted with #PorscheDesign and witness the power for yourself. pic.twitter.com/9Xvr2JK9Ly

Huawei also launched its much anticipated Huawei Watch GT 2 range of wearables. Equipped with the self-developed Kirin AI chip, the Watch GT 2 range offers class-leading battery life and a host of new features and functions including 15 sports modes, 10 training modes specifically for running, an enhanced music player and Bluetooth voice calls. It also comes with all-new wellness features that allow for hassle-free monitoring of a user’s heart rate, daily sleep, and other attributes. The watch will be available in two sizes, 42mm and 46mm. It is priced at €229 (~Rs. 18,000) for the 42mm variant and €249 (~Rs. 19,500) for the 46mm variant. 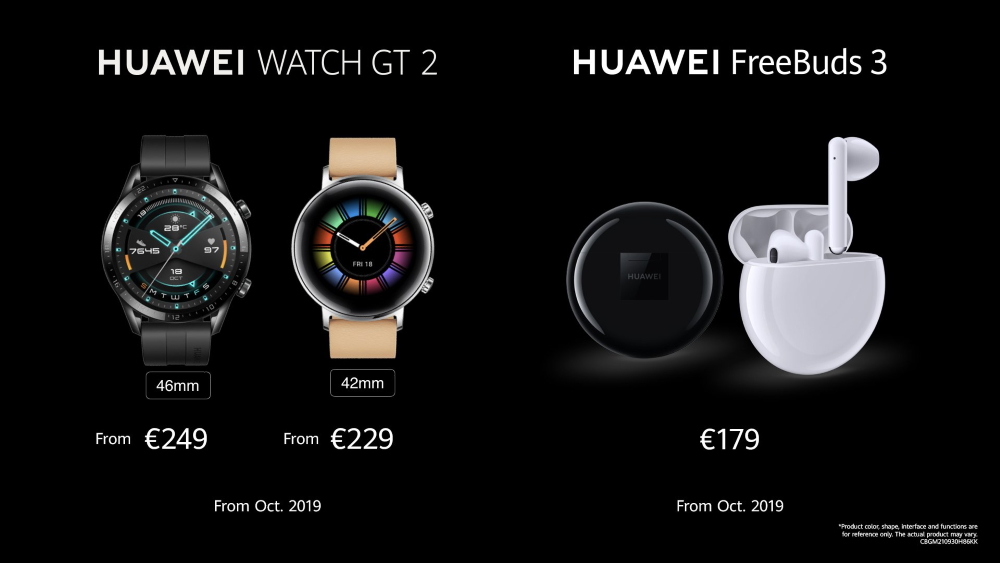 Additionally, Huawei also announced the Huawei FreeBuds 3 true wireless Bluetooth earphones which were launched recently at IFA 2019. The black and white versions of FreeBuds 3 will be available in China, Europe, Middle East, Russia, Asia Pacific and Latin America starting from October 2019. They are priced at €179 (~Rs. 14,000). Stay tuned to Mr. Phone to get notified of all the buzz in the smartphone world.