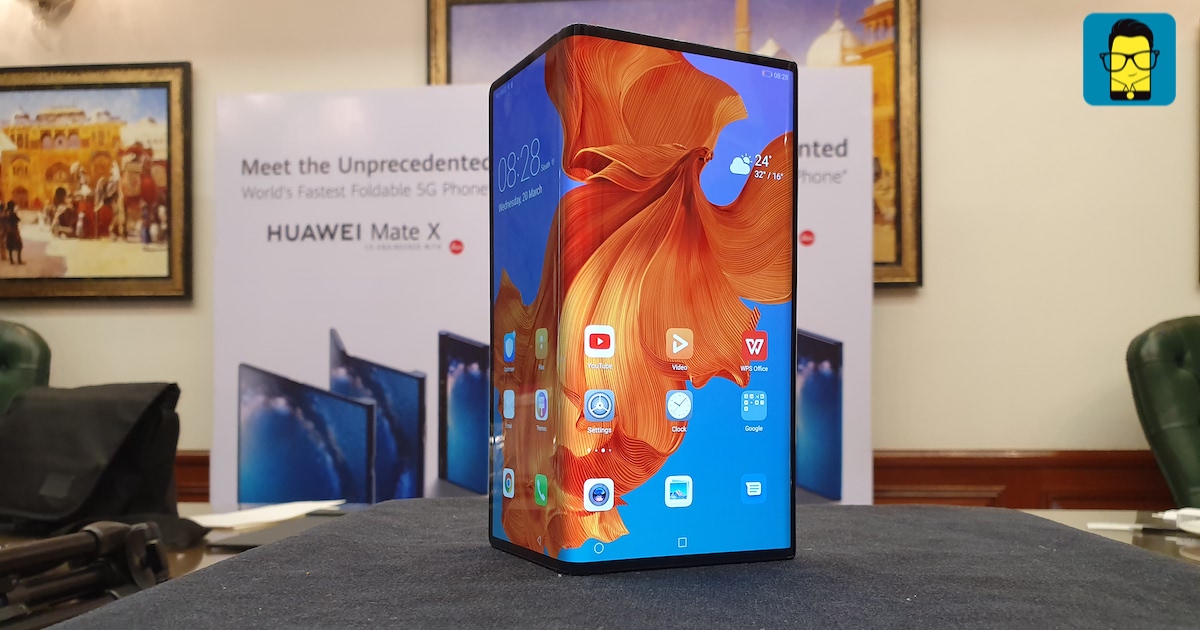 I think it is safe to assume that the Huawei Mate X stole the Samsung Galaxy Fold’s thunder at MWC. When we were invited to check it out at a closed-door briefing in India, I was positively excited. To see the future of smartphone technology before a lot of folks in the world is definitely a privilege we tech journalists enjoy.

Well, I saw the Mate X and mind=blown.

Huawei Mate X: looky and touchy but no foldy

First things first, we had a clear brief that we could touch the phone, but we couldn’t fold it. Anyway, one look at the Mate X and you know this is not your ordinary smartphone. This 6.6-inch display-toting beast can unfold into an 8-inch tablet. As far as the fundamentals of folding things go: 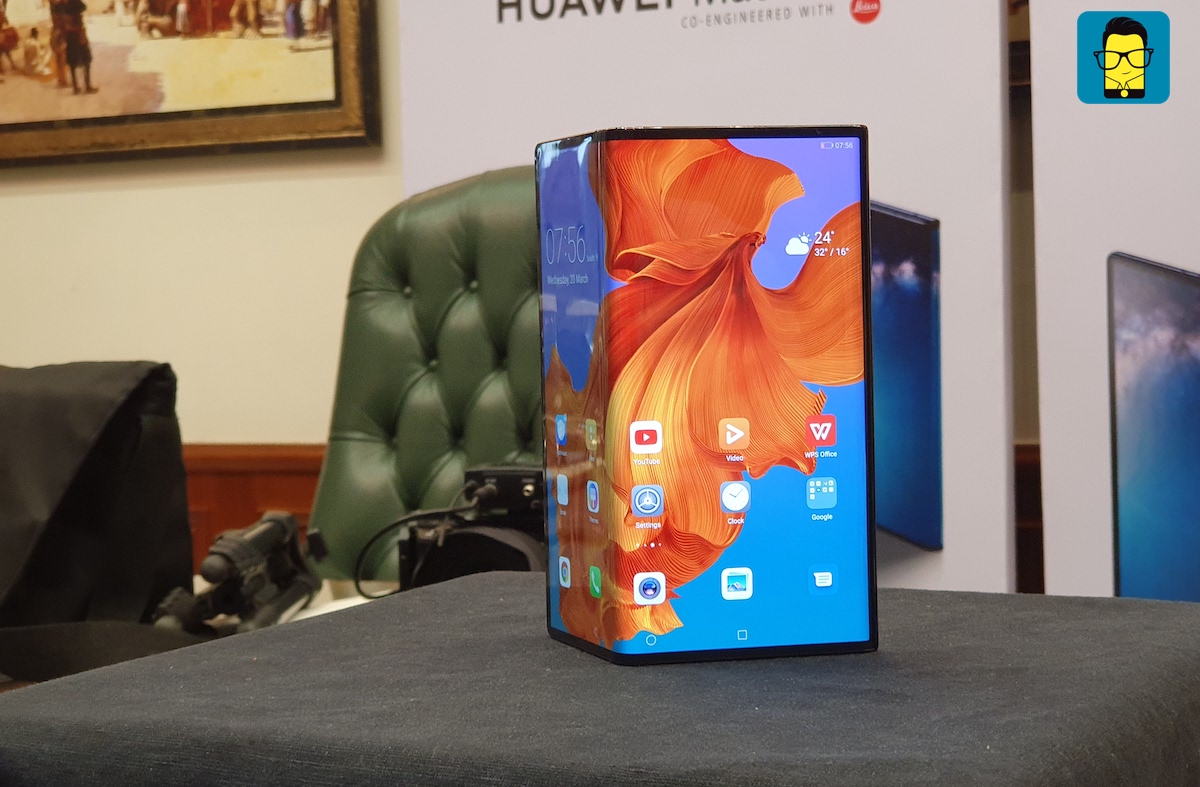 1. You will see a hole around the inside of the curvature if you don’t flatten it out. Fold a piece of paper and you will know what I’m talking about.

2. And if you do flatten it out, like you would a piece of paper, unfolding will reveal a crease.

How do you overcome this problem? The engineers at Huawei have developed a special hinge with over 100 components inside to ensure that the flexible OLED plastic doesn’t break. From what I saw, the plastic was reflective but the touch sensitivity was almost as good as glass.

One thing to note, however, is that plastic will attract a lot of scratches. While we couldn’t fold it, Vlad from The Verge clearly states in his hands-on — where he could actually fold it — that the whole mechanism was a little rigid. He wrote, “there’s no tactile smoothness to speak of, you just have to kinda shove it open.” 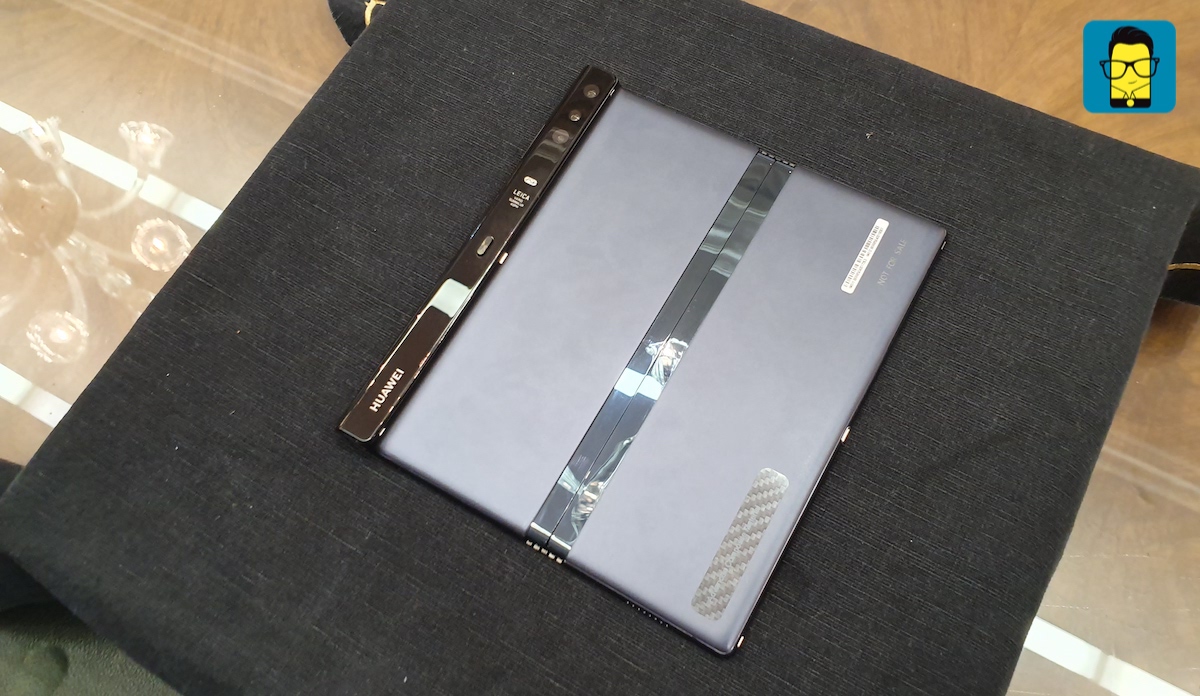 When I held it in the hand, I found the Mate X to be heavy despite its slim profile of 11mm for a foldable phone. Now, that’s not a bad thing. It is packing in so much future tech inside its 295g body weight. Coming back to the hinge, there is a release switch that unhooks the display from the grip section of the phone. I don’t know yet about the longevity of the mechanical components involved in this process.

First things first, the Mate X is a foldable phone that is priced exorbitantly at 2,299 Euros. Let it be known that this is first-generation technology we are talking about so it is bound to be expensive. 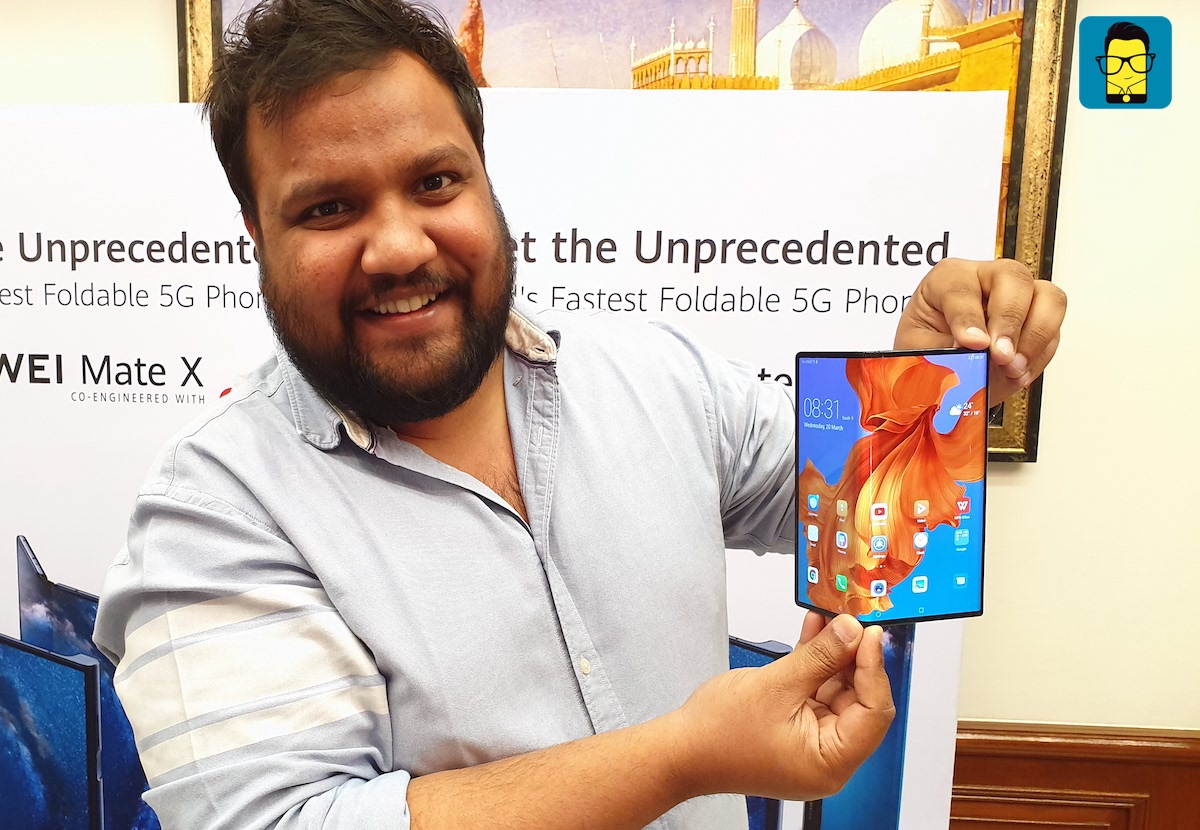 The grip has a bunch of components inside. Firstly, you have four antennas inside for stronger 5G reception and then you’ve got the three cameras as well. Now, Huawei wasn’t committing on the specs but GSMArena says that you get a 40MP primary camera, 16MP ultrawide, and 8MP telephoto. I don’t know if these specs are right but I did take a few shots with the phone and they looked like the typical Huawei processing we’ve seen on the Mate 20 Pro.

One of the coolest things about the phone is that you can use these cameras to take a selfie. And, you can also show a mirrored preview on the rear screen to the person you are taking a photo of. I am sure this is a feature that my wife’s going to love. She hates the photos I take of her. Now, she can just guide me to frame her using the mirror on the rear. Honestly, I am glad too.

Unfortunately, I couldn’t play around with the cameras for too long but the camera software looked like the one you get on the Mate 20 Pro. Oh, since you can use the rear cameras to actually shoot selfies, there is no notch or a punch-hole to distract your viewing experience. 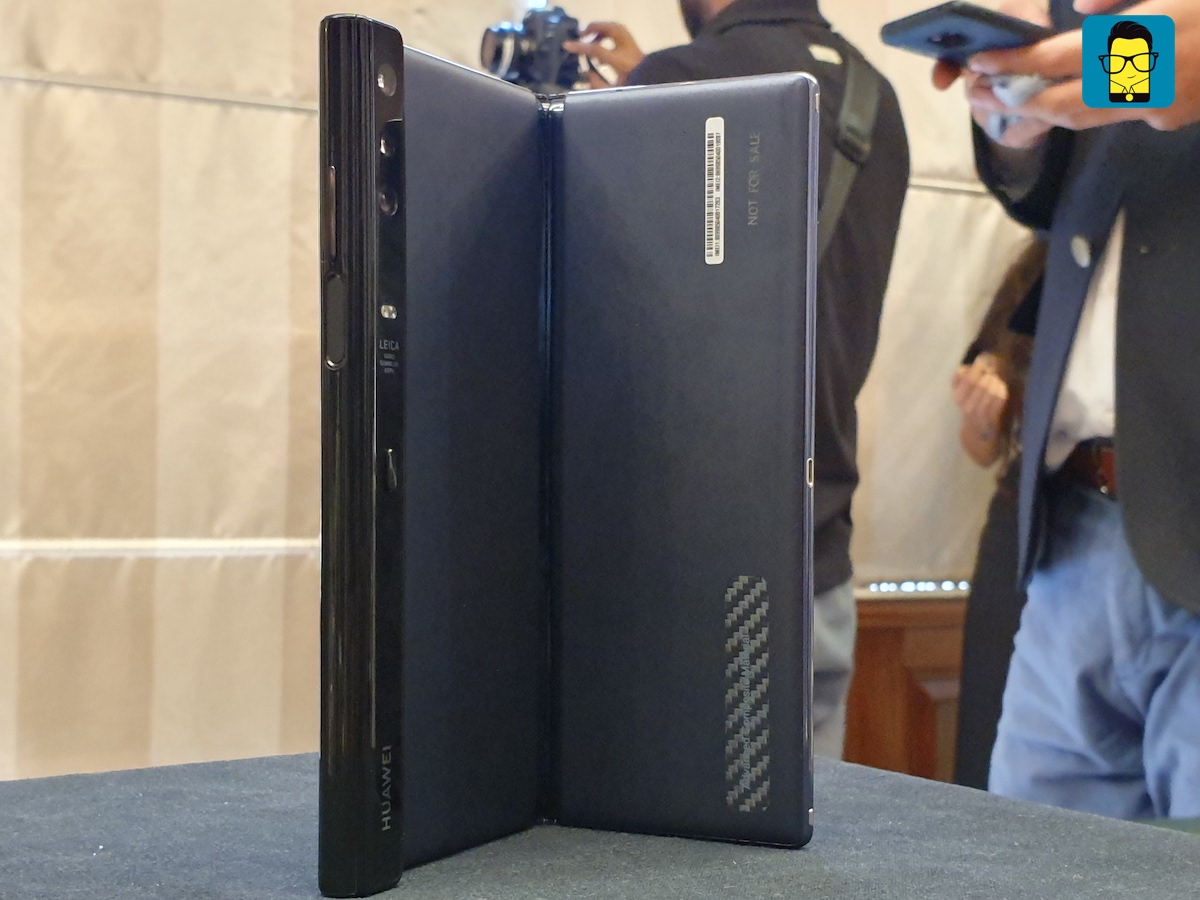 Internally, you get the Kirin 980 chipset that we have on the Mate 20 Pro. But the one addition that matters is that you get the new Balong 5000 5G multi-mode chipset. At sub-6 GHz low-frequency 5G spectrum bands, the Balong 5000 can achieve download speeds up to 4.6Gbps. This is double the 2.3Gbps speed that is possible on the X50 modem by Qualcomm. The X50 can be found inside the Samsung Galaxy S10+ 5G. 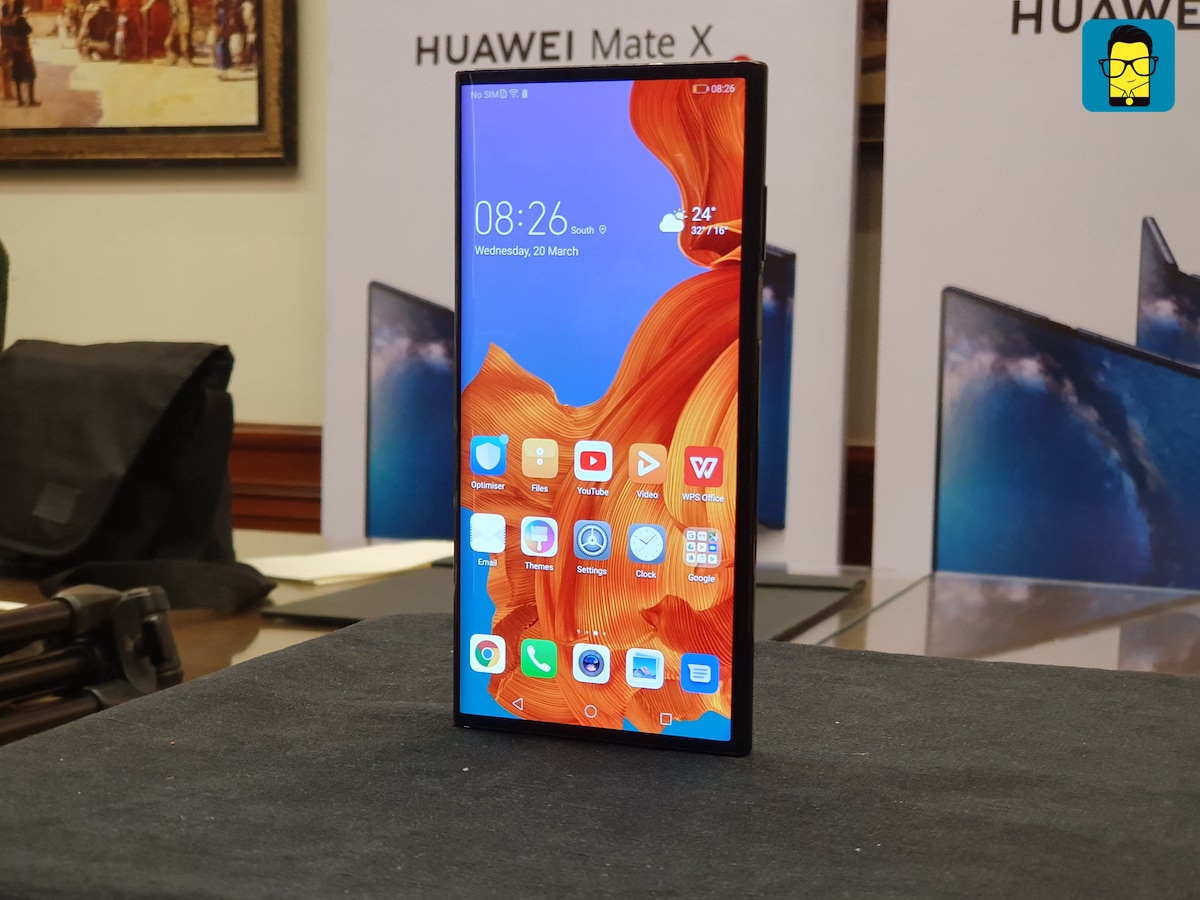 You get 8 gigs of RAM and 512GB of internal storage. There are two nano-SIM card slots and one of the nano slots can be replaced with Huawei’s proprietary nano-memory card. I really hope Huawei brings these cards to India.

One of the most important additions to the Mate X is the 4500mAh battery inside the phone. It is split into two pieces that sit on the two different bodies of the phone. And using the Type-C port at the bottom, Huawei has enabled the Huawei Supercharge feature. You get a 55W adapter in the box that can charge the Mate X up to 85% in 30 mins. In fact, this charger can go up to 65W to charge a Matebook X, which is a clever ecosystem push by Huawei.

Inside the box, you will also get a custom case with it that looks really practical and cool honestly. Unfortunately, Huawei didn’t have a case on display.

However, the bottleneck before the impending launch later this year is definitely going to be the developer support for apps to work in both landscape and portrait orientation on the phone. 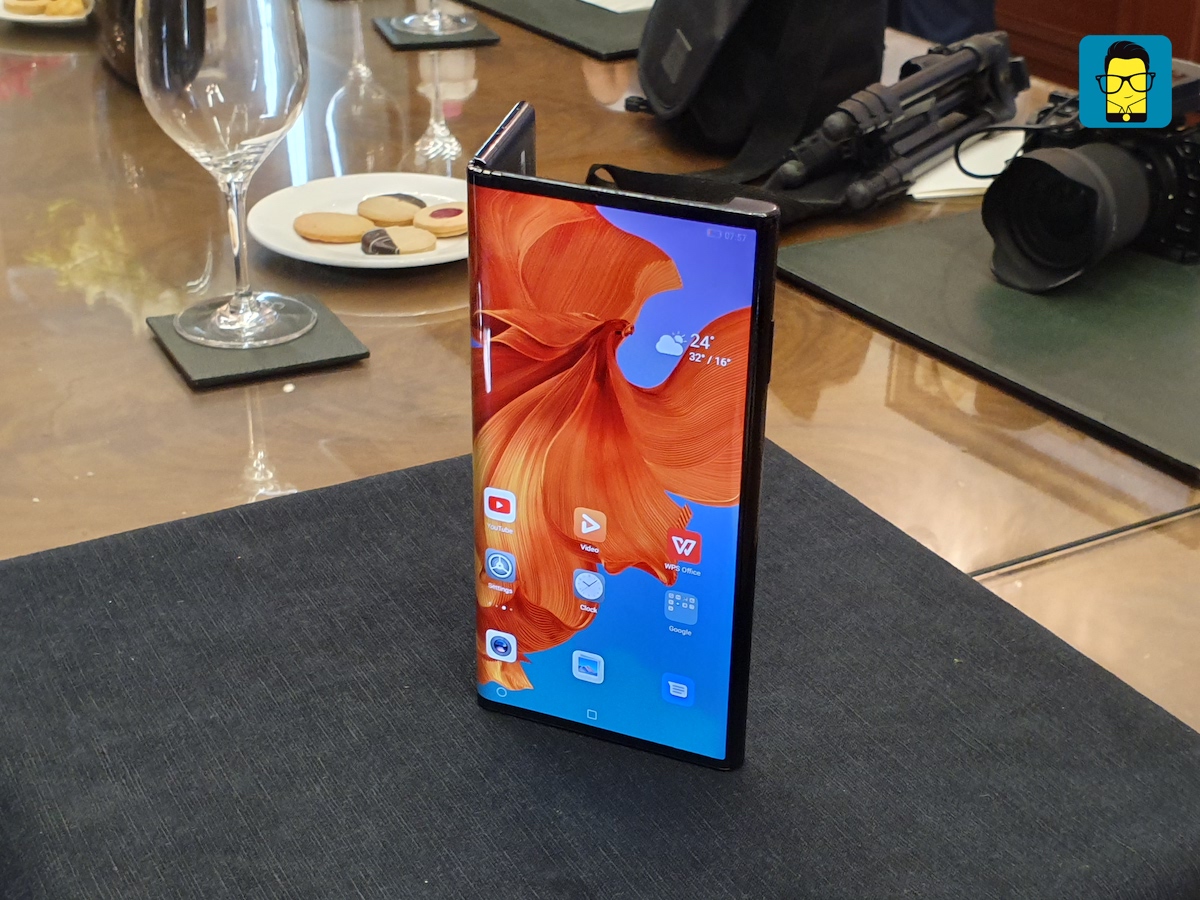 After spending time with the Mate X, I am convinced that Huawei has made a polished first-generation foldable phone. You have to see it to believe it. I know for a fact that only wealthy individuals with a predisposition for hoarding technology will even consider something like the Mate X. If you are one of them, the Mate X is going to be a great showpiece. 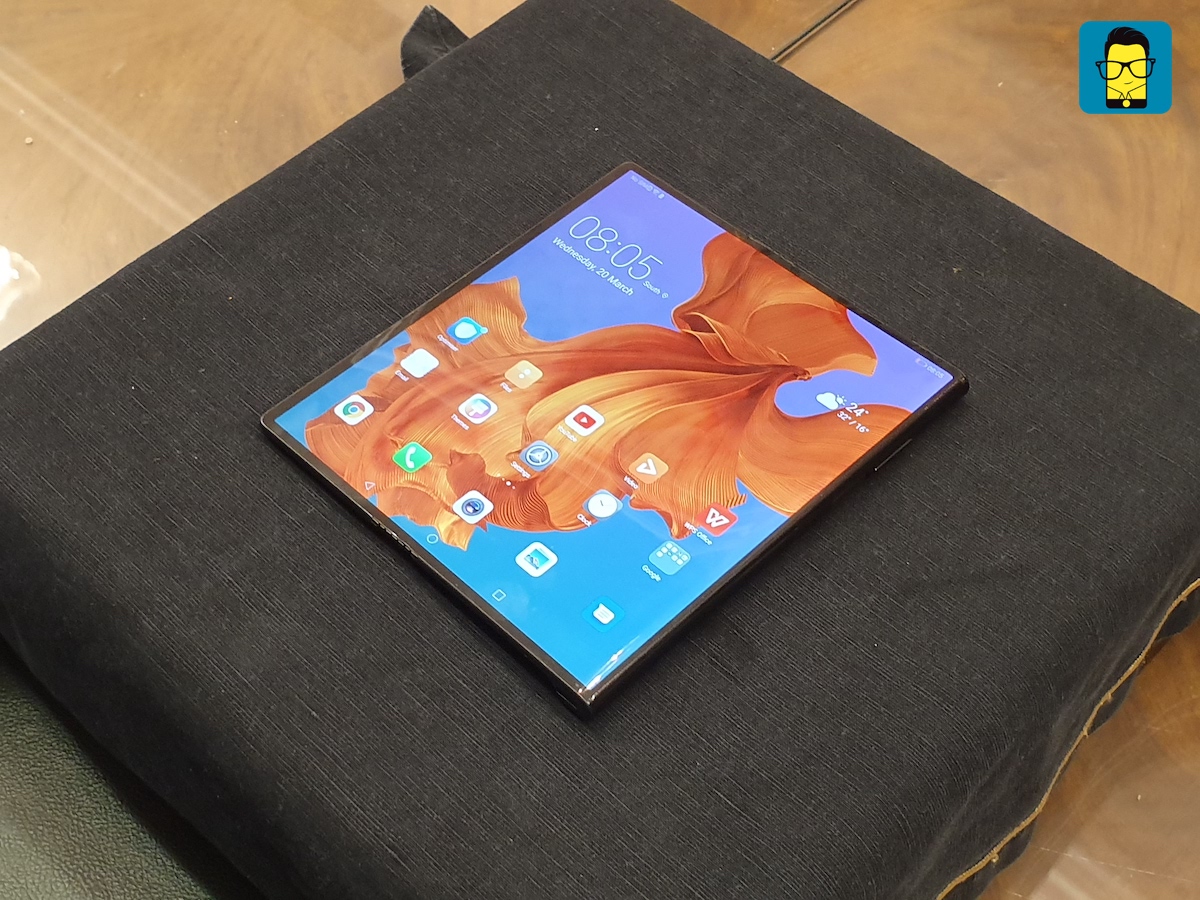 For the rest, just pray and hope that brands like Huawei find a way to make foldable phone technology viable for the mass market as soon as possible. Because, trust me, this drool-worthy smartphone technology needs to be in more hands sooner than later.