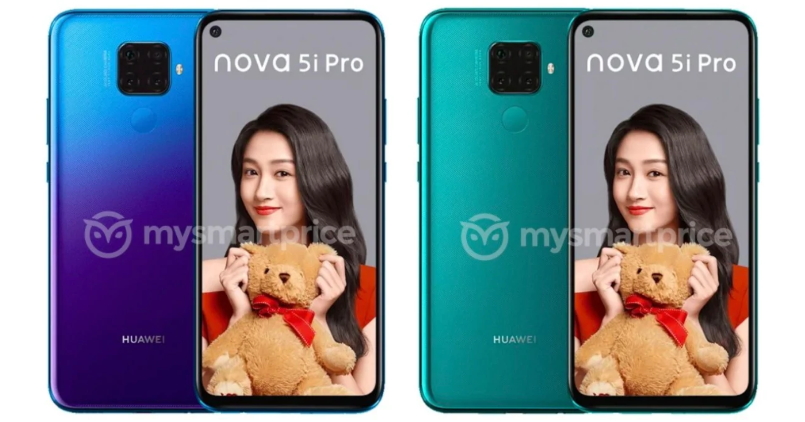 Around the same time last month, Huawei launched the Nova 5 and Nova 5 Pro in China. However, there was a Nova 5i scheduled for launch as well, which was then delayed. Now, we finally have reports of the device doing the rounds in the rumor mill. What’s more, is that we have a word about the specifications, as well as the leaked images of the device. So let’s take a look.

Ahead of its launch, the device’s hands-on video, as well as a couple of press renders, have leaked as well. Courtesy of MySmartPrice, the press renders of the upcoming device have been leaked. It shows that the device will be available in a total of three colors, namely teal/green, gradient blue, and black. Additionally, a hands-on video of the device has been leaked as well, which you can check out below.

The Huawei Nova 5i Pro recently passed the TENAA certification, and the images of the upcoming budget device have been leaked. As you can see, the device looks quite reminiscent of the flagship Huawei Mate 20 Pro that the company launched last year. However, it does come with some changes. For starters, there is a physical fingerprint scanner at the back. Also, there will be not one, not two, not even three, but four lenses at the back. Up front, you’d get a single camera lens. The images suggest that there won’t be a notch per se. However, the selfie camera will be in the form of a punch-hole camera, similar to the Honor 20 series.

The Huawei Nova 5i is said to come with a 6.26-inch display with thin bezels and an impressive screen to body ratio of 90.7 percent. Under the hood, the device will be powered by the Kirin 810 SoC, which competes with the Snapdragon 730. In terms of storage, it will be offered in two variants include 8 GB RAM which can be configured with 128 GB or 256 GB ROM. As for the cameras, there will be a quad-camera setup at the back, comprising of 48 MP + 8 MP + 2 MP + 2 MP sensors. As for selfies, there will be a 32MP punch hole camera. The device will be powered by a 4000 mAh battery which supports 20 W fast charging.