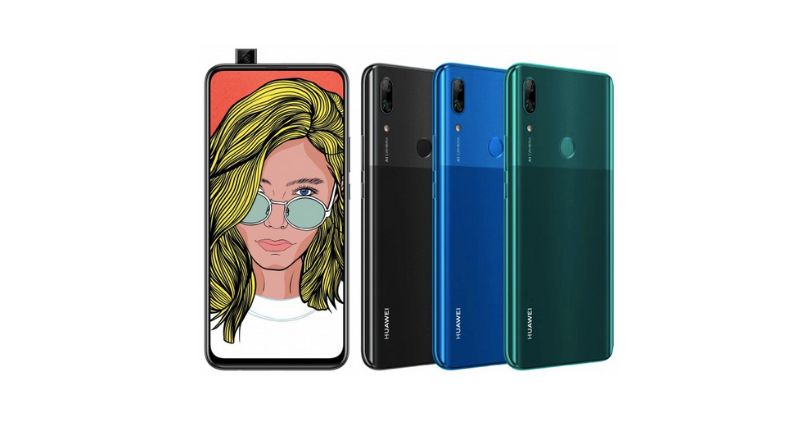 Huawei is all set to bring a new mid-range device to the market. It would be dubbed as Huawei P Smart Z. Recently, a listing of the phone has been leaked online on Amazon Italy’s website. Well, it’s more than just full specifications, we have got almost every detail including the pricing of the phone in Europe. Let’s talk about it all below.

Sporting a 6.59-inch full HD+ display, it will come in three colour variants including black, blue, and green. You get a bezel-less display, well, it indeed has a small chin at the bottom, but on the top, there is no notch, of any kind. Packing in a Kirin 710 processor, the chipset is accompanied by a 4GB of RAM.

Talking about the camera department, it has a dual rear camera setup. It includes a 16MP resolution lens with f/1.8 aperture lens and 2MP depth sensor with f/2.4 aperture. Whereas for the selfies and video calls, you’d get a 16MP shooter. The interesting part is that it’s an elevating selfie camera setup.

It has two biometric security setup including rear-mounted fingerprint scanner and Face-Unlock. The phone packs a 4000mAh capacity battery, which is huge, if not massive in its range.

This Huawei handset was believed to be priced at 210 Euro (), but according to the Amazon’s Italy listing, it will have a price tag of 279 Euro (). As of now, Huawei hasn’t shared any official announcement details regarding this. But it does seem like a soft launch has already been done. Unfortunately, the availability of the device is unknown for now.

What do you guys think of the Huawei P Smart Z smartphone? Let us know in the comment section below.