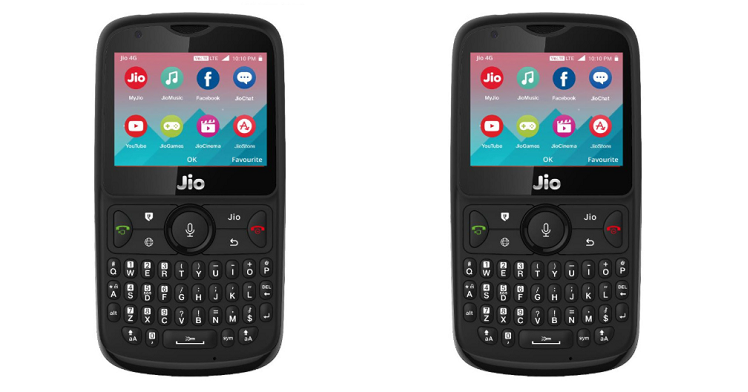 Jio has just announced its second generation of feature phone – the JioPhone 2 at the Reliance AGM meet in Mumbai. Besides other big announcements JioGigaFiber service and GigaRouter for broadband, the JioPhone 2 with QWERTY keypad and 4G VoLTE was launched at a price of Rs 2,999.

The handset is a step up from the candy bar form factor of the JioPhone and the new feature phone has a wider 2.4-inch QVGA non-touch display beneath which is a Blackberry style keypad and 4-way navigation key. There’s also the voice command button that was present on the JioPhone, that according to Jio Chairman, Mukesh Ambani, was used 20 crore times each month on the JioPhone. It has a mono loudspeaker and also comes with a built-in FM radio. 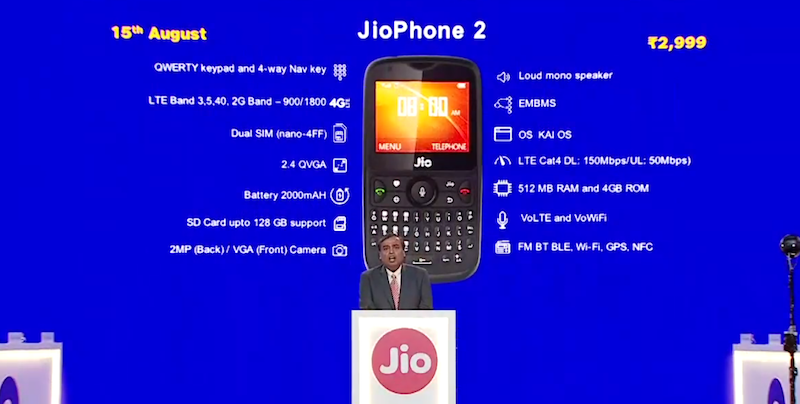 There’s a 2MP camera on the rear of the phone and a VGA camera on the front which isn’t quite what you will like very much on the device. Also, the processor isn’t specified, but we do know there’s 4GB of expandable storage on Jio’s latest feature phone and 512MB of RAM.

It supports dual-SIM, 4G LTE, VoLTE, and VoWi-Fi. In addition to that, it also has connectivity options such as FM, Bluetooth, Wi-Fi, GPS and NFC.

The new model comes with LTE Cat.4 that can give users up to 150Mbps download speeds and the running operating system is same as the JioPhone – KaiOS. Unlike the JioPhone, JioPhone 2 comes ready for WhatsApp, YouTube, and Facebook with apps available on its app store.

The JioPhone 2 costs Rs 2,999 and will be on sale starting August 15. There’s a new ‘Monsoon Hungama’ offer that will shave most of the price off the JioPhone if you have a feature phone lying around. As a result, the last year’s feature phone will effectively cost only Rs 501. The offer starts on July 21.