LG G7 ThinQ to have a super-bright 6.1-inch display that reaches 1000 nits The LG G7 ThinQ is due to launch on May 2. And today, the company revealed an interesting fact regarding the upcoming flagship. In a press release, LG announced that the LG G7 ThinQ will have a 6.1-inch IPS LCD display that can reach 1000 nits of brightness.

Further, the display will be a QHD+ 3120 x 1440p resolution panel. LG boasts that it will be able to reproduce 100% of the DCI-P3 colour gamut and will be 30% more efficient than the LG G6 display. Additionally, the aspect ratio will be 19.5:9. The flood of leaks regarding the LG G7 ThinQ has already made it clear that it will enjoy a notch. To ease the pain of users, the notch can be hidden by a sort of black bar that will act as a secondary display. This has been implemented by the likes of Huawei as well in the P20 series and it’s a nice thing. 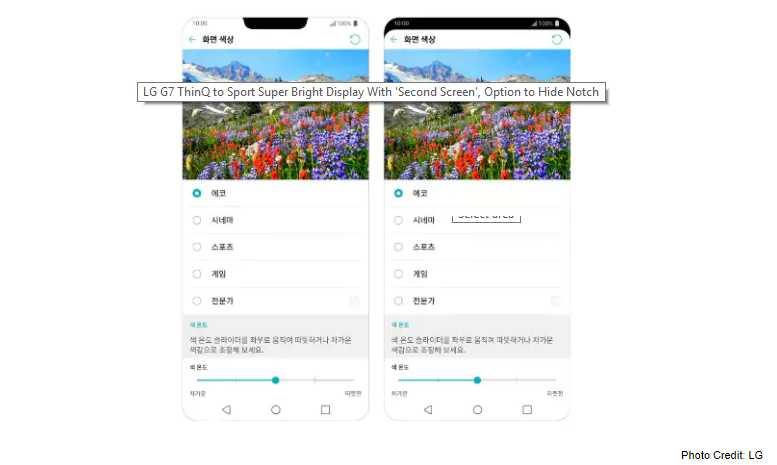 Further, the phone’s smart display is capable of changing modes in relation to the content displayed on it. Additionally, there’s an Expert mode that controls RGB balance, colour temperature, saturation, and hue amongst other parameters.

There hasn’t been a shortage of leaks concerning the LG flagship. LG is believed to use dual 16MP sensors for the rear imaging setup and a Snapdragon 845 as the brains of the handset. Further, the handset also conserves a 3.5mm headphone jack and has a ton of AI features that we saw on the LG V30S ThinQ at the MWC  show.