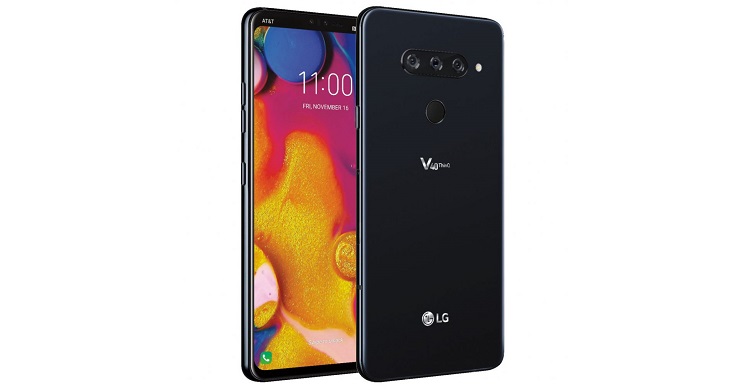 LG has been gearing up for the launch of its next V series handset, the V40 ThinQ for quite a while now as the launch date, October 3 approaches. But in a bid to showcase the clear renders of the upcoming handset, Evan Blass Aka @Evleaks by his twitter handle has shared high-resolution press renders of the new LG phone. The V40 would be LG’s flagship smartphone is believed to pack a total of five cameras.

While this is not the first time that the images of this device leaked, but this time it’s the press renders (utilizes by the brand for promotion) rather than the CAD renders. Apart from the image, Evan also quoted that this model shared by him is for AT&T, US telecom carrier. Apart from that text information, not much has been shared by the popular leakster.

Further exploring the image led to confirm that LG is indeed offering the triple rear camera in a vertical arrangement. While it will not forgo the rear-mounted fingerprint sensor on this V series model. The dual cameras on the front can be spotted easily in the image. Talking about the triple rear cameras on the device, the setup might include an arrangement of a telephoto lens, a wide-angle lens, and a 2X zoom lens.

Interestingly, the new upcoming handset from LG is believed to offer Android 9.0 Pie based user interface out of the box. Now that would be something. Looking at how this device will be announced before Google Pixel, which is scheduled for October 9, it will make a first official Android smartphone to offer Android 9.0 Pie out of the box. This feat may be short-lived, but it is indeed a commendable job. It would be more interesting is the sooner availability of the handset in the markets like India and China.