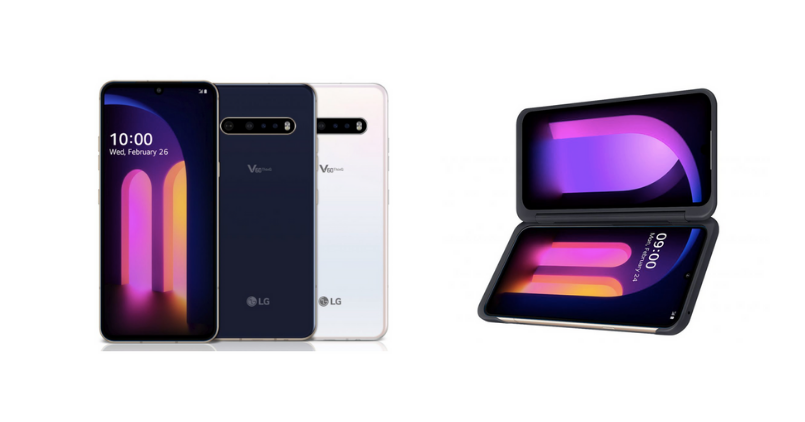 LG has announced its next-generation of V series handset. The all-new LG V60 ThinQ has been officially announced by the South Korean smartphone maker. The new flagship smartphone will be powered by the latest Qualcomm chipset and has introduced various new changes. Let’s talk about it all below.

LG V60 ThinQ brings in a range of new existing features on the V series and improves upon the existing format. Sporting a 6.8-inch Full-HD+ display, it comes with a P-OLED display and HDR10+ support. It’s a 20.5:9 FullVision screen.

Powered by a Qualcomm Snapdragon 865 SoC with Adreno 650 GPU with Snapdragon X55 5G modem. It is accompanied by an 8GB of RAM, and there will be two storage variants – 128GB and 256GB. It can be expandable up to 2TB via a microSD card slot.

It will be running on the Android 10 OS based LG’s custom UI. Speaking about the camera department, it has a dual rear camera setup in a vertical manner. Where the primary lens is of 64MP with f/1.8 aperture, the secondary lens is of 13MP, which is a super-wide-angle lens with an f/1.9 aperture.

The company is offering a TOF Sensor lens to accompany the dual rear camera setup. It’s not really surprising to see only a dual-rear camera setup. The phone is capable to record in 8K video recording with HDR10+ in manual mode. It’s incredible as far as the video capability is concerned. There is a 10MP selfie camera sitting in the waterdrop notch style.

Speaking of the security, it offers an in-display fingerprint sensor for keeping away those prying on your device. It’s an IP68 rated, which makes it a water and dust resistant smartphone. Further durability concerns should go away as it is Military MIL-STD 810G compliant.

Offering incredible features like 32-bit QUAD DAC, stereo sound output, and 4 microphone setup, it has it all for audiophiles. LG has also updated the Dual Screen accessory, which now boasts a 6.8-inch Full-HD+ OLED panel, similar to the primary display. It has a 360-degree freest hinge that can be used in laptop, stand, and tent modes.

Note that there is also a 2.1-inch notification panel, which allows a convenient always-on functionality. The dual-screen accessory now has given its own power supply via USB-C port. This phone will be available in Blue and white colours Unfortunately, the pricing is not yet shared by the brand.