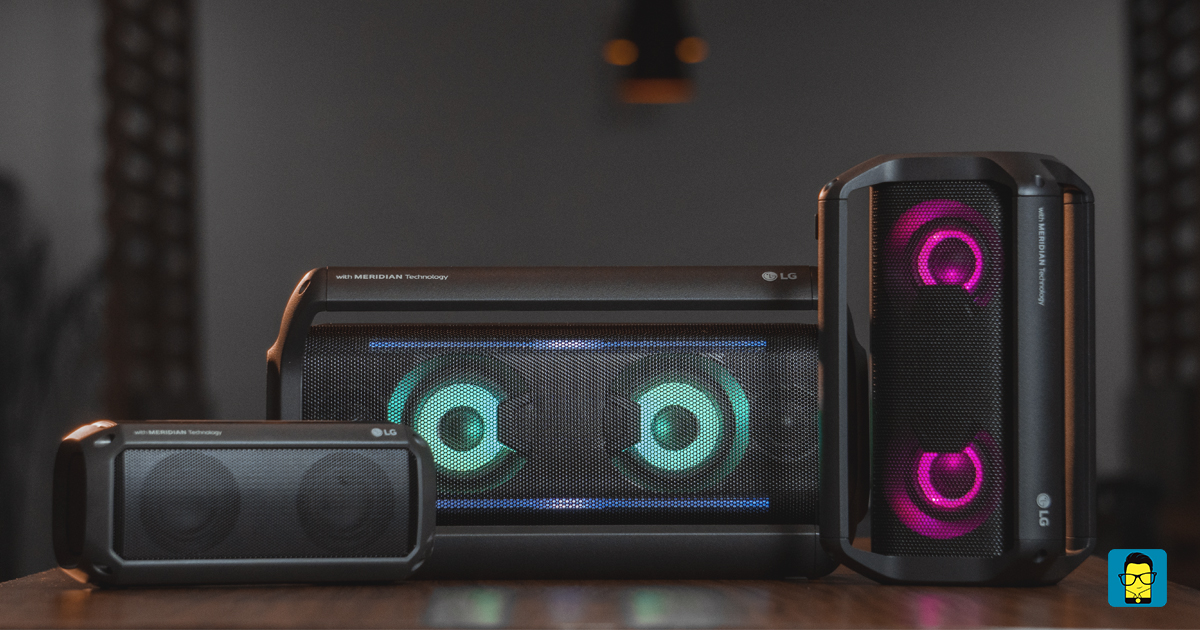 I can go on and on about how Bluetooth as the most popular wireless standard for audio needs to be phased out soon. But no one can deny that Bluetooth has invaded the lives of most smartphone users with speakers and headphones. And thankfully, there are a few brands that are trying to innovate in this limited space. Now, some could be considered gimmicks but I have to dole out brownie points for trying.

LG’s new XBoom Go series includes the – PK7, PK5, and PK3 – three speakers that are throwing a lot at the consumers. Well, let’s get down to the review, which I am going to break down into four parts. I’ll start off by talking about the similarities and differences in the specs of these speakers. Then, we shall review the sound quality each one of these speakers individually. 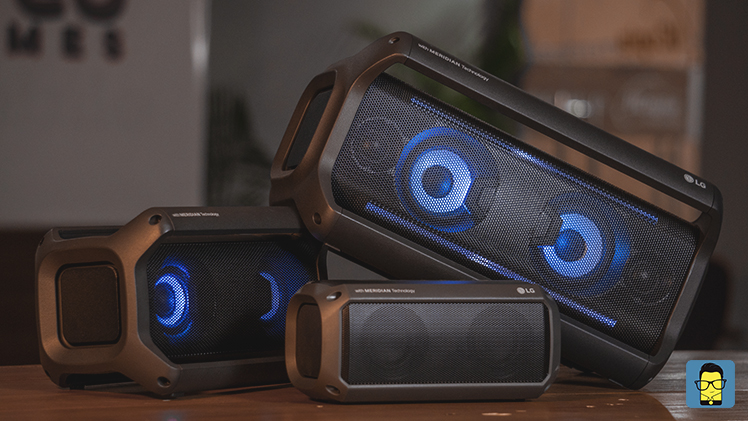 The similarities and differences in specs

To start off, design-wise the PK7 and the PK5 have a similar design with handlebars that make it easy to transport them around. Moreover, these handlebars can absorb some shock, and since they protrude outwards you can rest assured the speaker drivers and other internal components will stay protected. The PK3 loses the handlebars for the regular cuboidal shape. 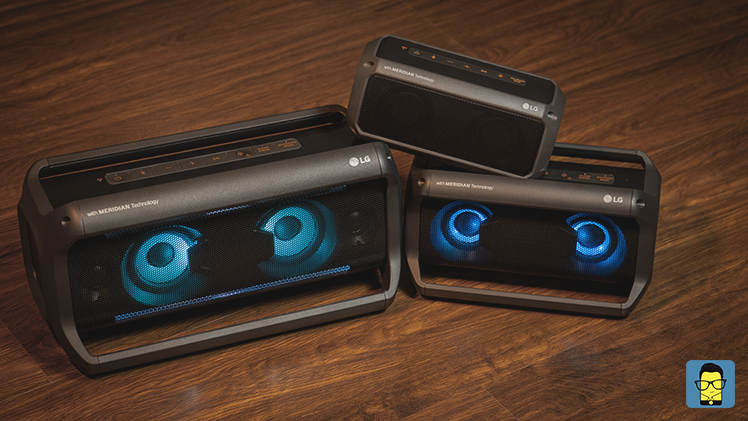 Interestingly, the PK3 (pictured above) comes with IPX7-certified waterproof, which means that it can be submerged under 1 meter for water for up to 30 minutes. Ironically, its more expensive counterparts are only IPX5 certified, which means they can take low-pressure jet sprays of water. I don’t see the reason for such discrimination but LG might have its reasons. 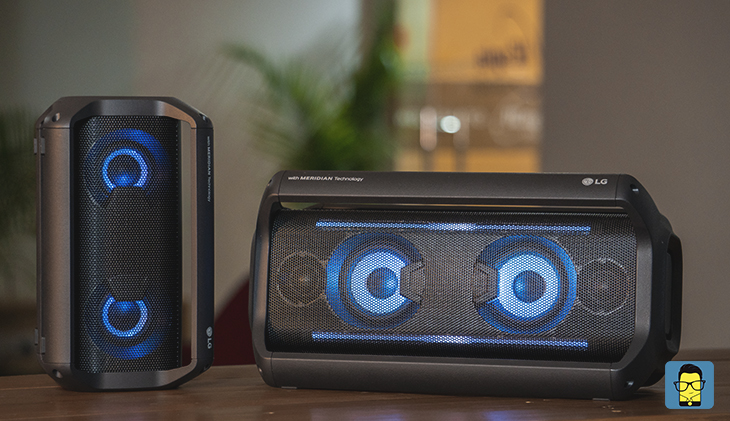 All the three speakers come with support for enabling your smartphone’s Voice Assistant with the press of a button. On the PK5 and the PK7 (pictured above), this button also doubles up as the button to switch between the different pulsating modes for the in-built lights. Yes, the PK5 and the PK7 come with lights. Oh maybe, that could be the reason for the inferior ingress protection. Well, that’s just my guess; the real reason could actually be different.

These lights can be controlled by an Android (no support for iOS) phone using LG’s dedicated Music Flow app. Honestly, I find these lights gimmicky and they don’t even sync to the beats accurately. I really don’t understand why brands like Sony and LG are peddling this tech. Do you guys actually want flashy lights while partying and playing music? Maybe, you do. Maybe, I am growing old. But yeah…innovation… 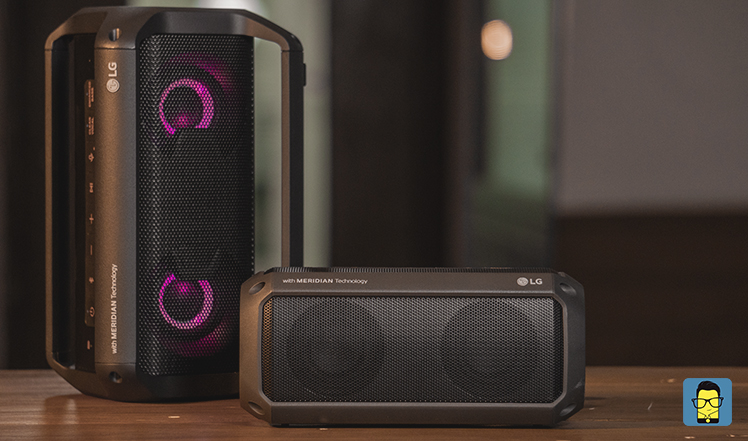 Apart from this, the PK3 and the PK5 (both pictured above) come with USB Type-C support for charging. In comparison, the PK7 uses a regular DC in port for charging. This is supremely weird again. The top tier product loses out on Type-C charging for some odd reason. Anyway, you get an assured 22 hours of music playback with the lights of on the PK7 and 18 hours on the PK5. And finally, the PK3 offers 12 hours of playback on a single charge. These numbers are pretty damn good really, even for ideal scenarios.

And honestly, ever since these speakers came to our office, a little more than a week ago, I haven’t charged them once. Furthermore, the PK5 and PK7 come with support for Dual Play, which is essentially Daisy Chaining multiple – similar kind of – speakers together wirelessly. I don’t know if they do true stereo audio or just play both the channels at the same time on both the speaker. 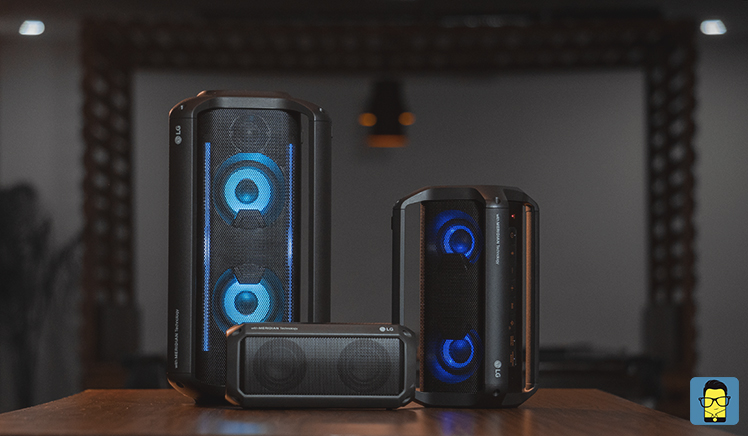 As for the internals, the PK7 comes with two-channel speakers, two tweeters, and a couple of passive bass radiators on the sides. All this tech enables an output power of 40W when powered and 30W on battery mode. This is vital information because I felt the volume was low initially over Bluetooth. But plugging it in immediately amped the audio. The PK5 comes with two stereo speakers and two passive radiators, which have combined output power of 20W.

The smallest of the lot, the PK3, has the similar driver config as the PK5 and tops out at 16W power. As for the BT codecs, the PK3 can stream in aptX and the PK5 and PK7 combined can go up to aptX HD. So, that’s definitely great. Oh btw, the audio on all these speakers is tuned by Meridian – a British audio company known for making high-end speakers and professional-grade audio equipment. 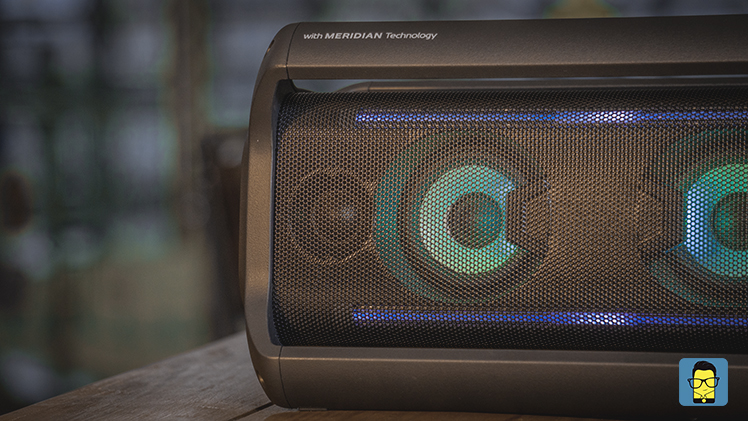 LG PK7: not just all about the bass

The PK7, the biggest speaker of them all, goes for the kill with its excellent dynamic range and detail. I will elaborate on the sound signature in a bit but let’s get the basics out of the way. This is not a 360-degree sound. You have to sit straight in front of the sound. While you can hear a fair bit of the dynamics of the sound peripherally but it is not as effective, you can’t really hear the stereo separation unless you actually sit right next to the speaker. It is essentially a singular blob of sound that travels through the air and into your ears. Also, this thing can get very, very loud inside a 200 sq. ft. room. Which is why I think the PK7s are meant for the outdoors. 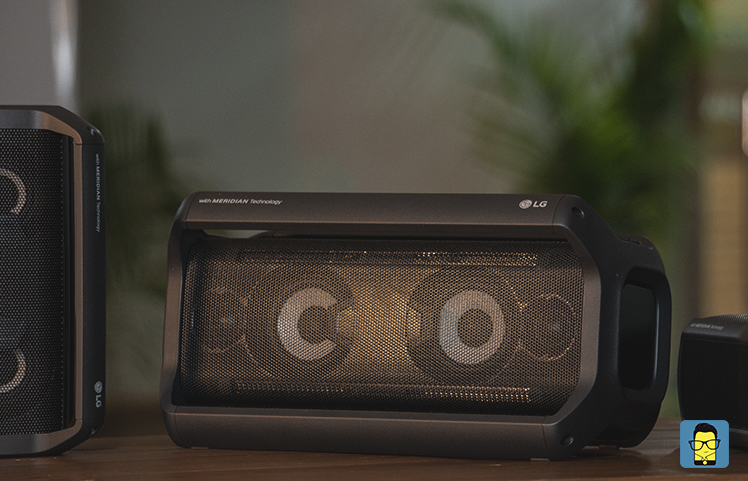 Coming to the sound, the PK7 shines when you have the Enhanced Bass and the Clear Vocals turned on. It is actually on by default, I believe. The sound signature is one that is defined by the aggressive mid-bass performance. The 2 channel speakers and the passive radiators move so much air that you can literally feel the rumble at full volume. In fact, if you sit close to the speaker you will feel the thump in your chest. Also, importantly the speakers don’t distort at full volume whatsoever.

The sub-bass performance gets buried in the face of the aggressive mid-bass. In Jai Paul’s Jasmine, which has a soundscape that is comfortable in the lower end of the frequencies, I could see that the mid-bass bullied the sub-bass frequencies a lot. Thanks to the presence of the two tweeters, you also get a fair pristine treble that has the right amount of peak. The initial shimmer in Undone is cleanly reproduced and it doesn’t get affected by the bullying bass when it eventually kicks in the song. The shimmer continues to stand tall. 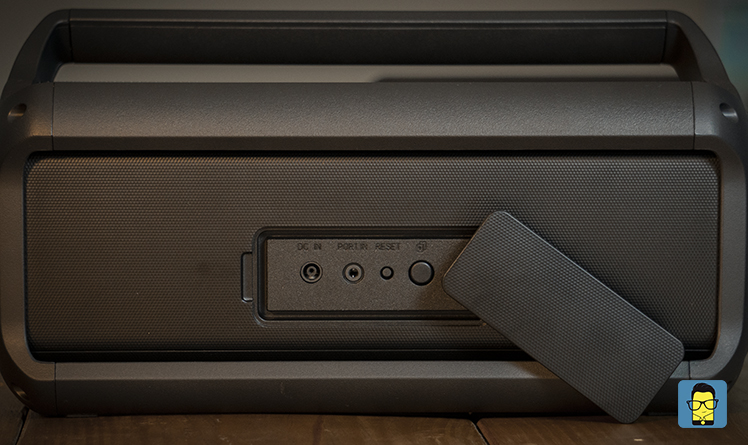 In the same song, the vocals feel adequately bright but it could be slightly recessed and don’t really shine as much as the treble. But in vocal heavy songs, the mids are fairly well sustained. I have no complaints as such.

Overall, I think the PK7 has the trappings of an audiophile-grade BT speaker but it is tuned to favour the mid-bass a lot. In more ways than one, it reminds of V-Moda’s sound signature on the Crossfade M100. I think the speaker is really well-suited for Rock, EDM, and Pop genres, encapsulating the sensibilities of the general audience’s listening habits.

As for the PK5, all that I said about the imaging, the soundstaging, and the stereo separation, stays the same. Evidently, the sound signature is bound to be different. And, it is because of the lack of two tweeters. You don’t get the same level of fidelity in the higher range of the frequencies. But, the crystal clear clarity remains the same. It is a very similar sound signature as the PK7, with a lot of weight and rumble in the mid-bass section. Again, the PK5 is suited for Rock, EDM, Hip-hop, and Pop genres. 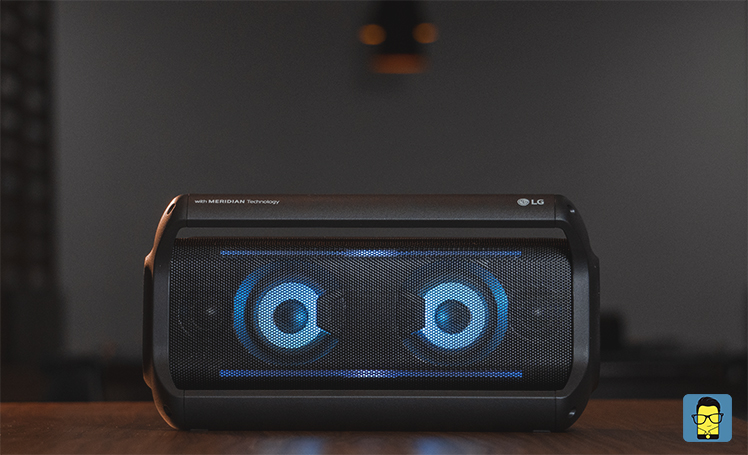 Unlike the PK5 and the PK7, the PK3’s sound lacks the weight in the bass. Yeah, I was honestly surprised too. It sounds clean and mostly distortion-free even at loud volumes. But, its competition offers a slightly more grunt in the low end. And, that will matter for the segment that LG is targeting. I still liked the sound signature because of the clean dynamics and the clear instrumentation. The PK3 works very well as a speaker that you’d use next with your laptop for watching Netflix or for some casual listening on YouTube. 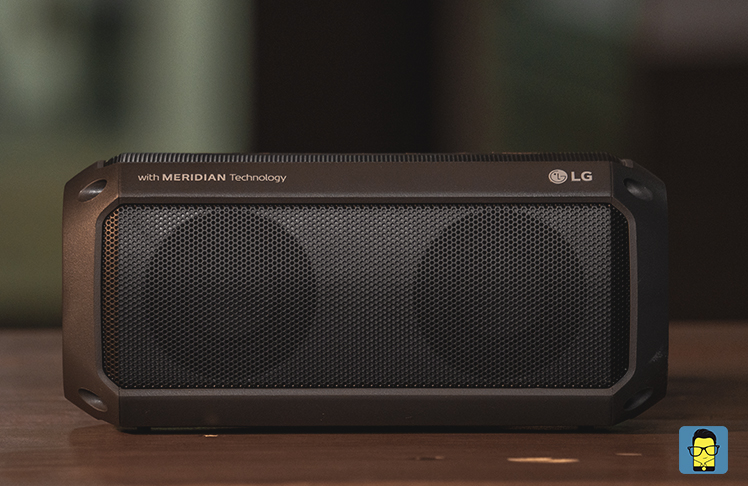 So, how good are these speakers really?

Let’s take a look at each speaker separately. The LG PK7 goes for thunder and rumble with a fairly clean dynamic range in the sound too. For its asking price of Rs 22,990, it goes up against one of my favourite BT speakers – the Marshall Stanmore. That thing, with its classic guitar amp look and excellently detailed sound can rock out a room easily too. In fact, between the PK7 and the Stanmore, I’d go for the latter purely because of the no-nonsense approach to music. Also, let’s not forget the excellent Bose Revolve+ speakers. Those things offer an excellent and loud 360-degree sound. 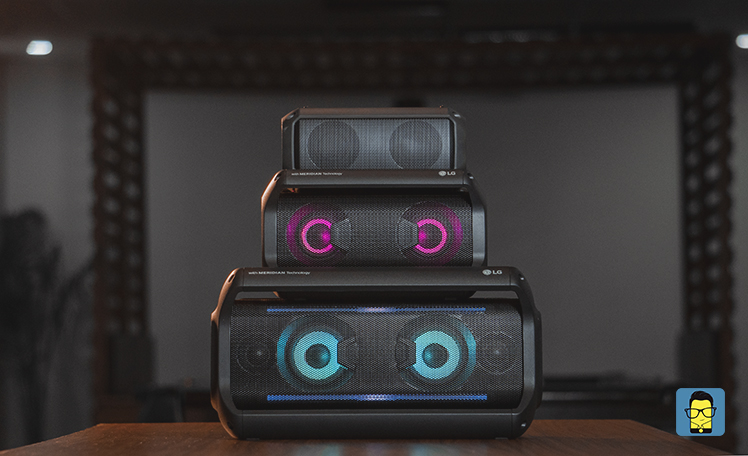 Okay, on second thought, the PK7 — while it does sound great — might have a very tough competition to fend off. I guess the glowing lights on the PK7 will guide it on…

As for the PK5, this one finds a nice balance of its own in between the PK7 and the PK3. But, while evaluating it might seem like this one doesn’t have an identity of its own. But, this is the one I can easily recommend because, for its price tag of Rs 14,990, it offers the goods and sounds decent too. 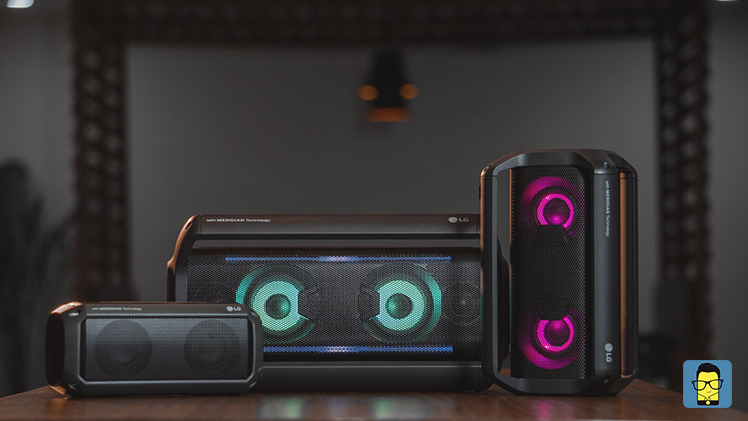 As for the PK3, this pocket-sized monster – despite all the advertisement – lacks the punch in the lower frequencies. And, that’s a letdown. So, if you are looking for a bass-heavy speaker, there are many other options out there. Having said that, I could see someone picking up the PK3 purely for the clean sound that it offers. Competing speakers definitely do not offer this level of fidelity.

So, what do you guys think of these speakers? Do let us know in the comments section below.