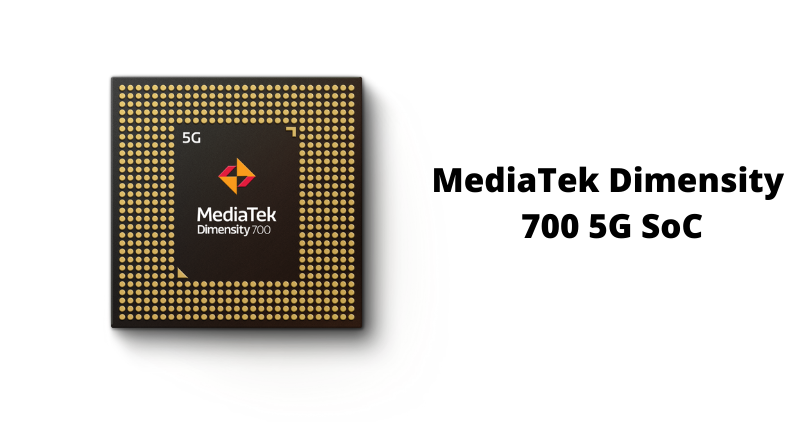 MediaTek Dimensity 700 5G SoC is new in house chip from the chipset maker that is designed to cater to budget phones. The company has announced this new chipset under its Dimensity 700 series. The new chipset follows the Dimensity 720 SoC, which was another 5G chipset from MediaTek, launched early this year. We have seen several models featuring the chipset.

The latest Dimensity chipset is built on a 7nm process. It claims to bring 5G to the mass markets, which could mean cheaper phones with 5G capabilities. The chipset packs in 5G Carrier Aggregation (2CC 5G-CA) and 5G dual SIM dual standby (DSDS). These tend to deliver users faster speeds and also brings Voice over New Radio (VoNR) capability for 5G. The quicker speeds include up to 2.77Gbps on 5G. The DSDS support on the chipset makes the device Dual 5G SIM capable as well.

The latest chipset features MediaTek’s Ultra Save technology which is said to improve efficiency and make users charge their smartphones less often, according to MediaTek. 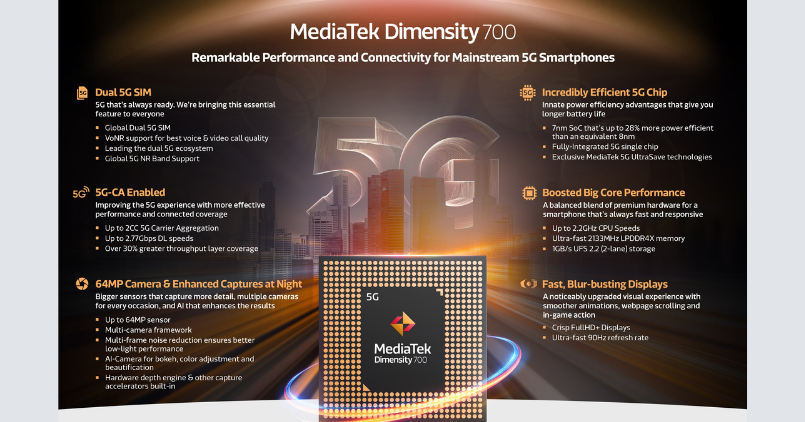 As suggested, the latest 7nm MediaTek Dimensity 700 SoC is an octa-core processor. It is equipped with two ARM Cortex A-76 cores and ARM Cortex A55 cores both combine to deliver clock speeds of up to 2.2GHz. The chipset also incorporates Arm Mali-G57 MC2 for GPU.

In terms of storage, the chipset enables support for up to 12GB LPDDR4X RAM. The display support includes 2520 x 1080p resolution alongside 90Hz refresh rates as well. The connectivity options, on the other hand, include Dua 5G, VoLTE, Wi-Fi 5, Bluetooth 5.1 and GPS.

For camera capabilities, the latest chipset can handle up to 64MP camera alongside dual 16MP secondary cameras. These cameras can additionally feature several AI Enhancements as well as improvements in 3D Noise Reduction. The video capabilities include recording/viewing up to 2K at 30fps.

Lastly, the MediaTek Dimeinsity 700 5G SoC supports multiple voice assistants on smartphones. All in all, the latest chipset brings in more capabilities that include — the much-anticipated 5G for the budget to mid-range phones. This chipset adds to the existing 5G chipset portfolio from MediaTek. We can expect this chipset to feature in phones that are slated to release in the first quarter of 2021.