Mi Band 4 review: I dare you to find a better budget fitness tracker 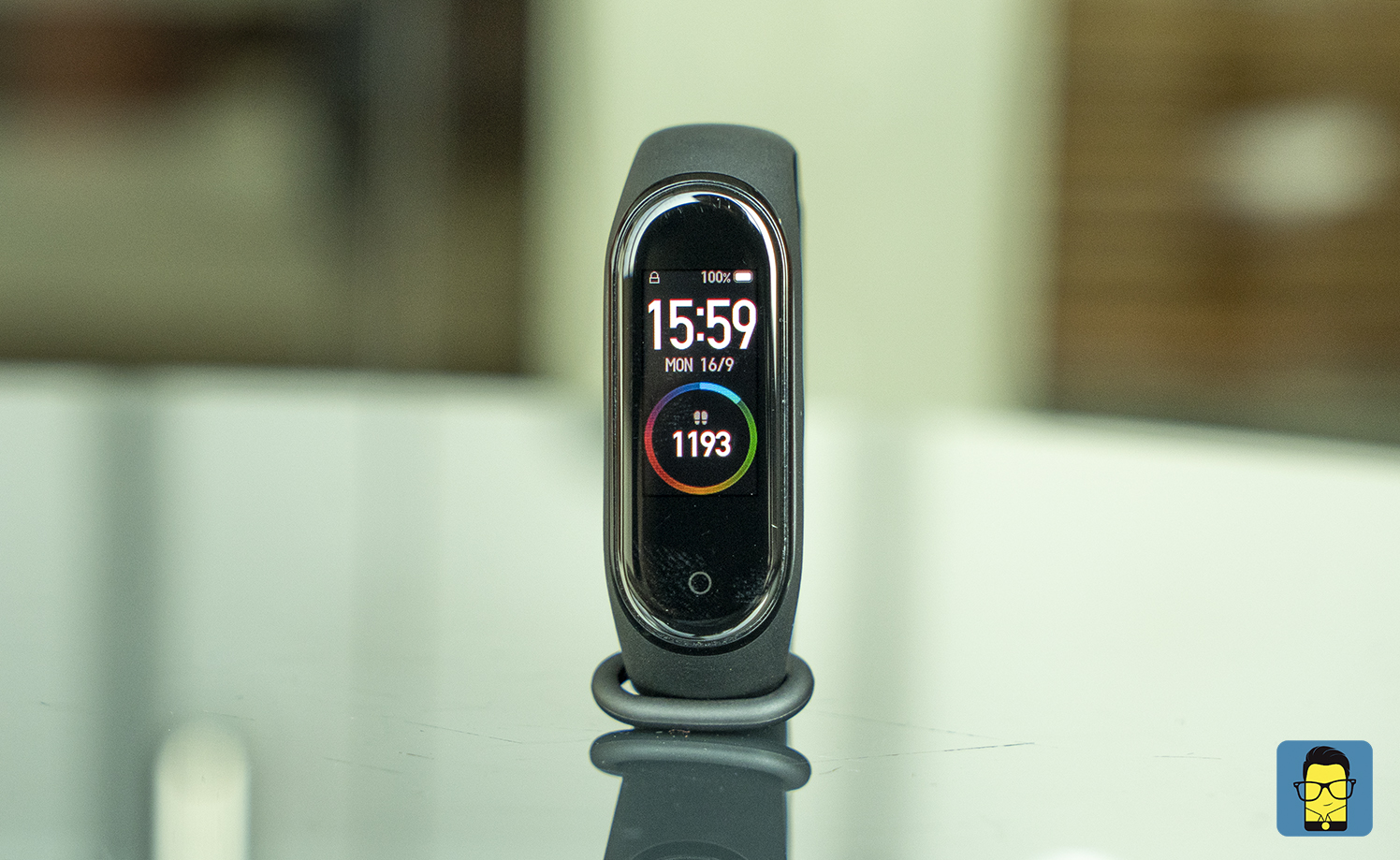 The one fact that no one can refute is that the Mi Band 3 is one of the most popular fitness trackers out there. In fact, according to IDC, Xiaomi is in the second spot – just below Apple – when it comes to overall shipments in the wearable space. It is a pity that I never managed to use a Mi Band 3. However, I have rectified that situation by using the recently launched Mi Band 4.

And, after my time with the Mi Band 4 I am convinced that it is the best budget fitness tracker you can buy. Let me tell you why.

As far as the design is concerned, the Mi Band 4 doesn’t try anything different. You get the same vertically-aligned band with a detachable silicone strap. The tracker module doesn’t sit flush with the band and juts out. While it looks odd, it is this distinct design aesthetic that sets it apart from the competition and stands out. Quite literally.

There is one tiny design change from the Mi Band 3, though. The lone button below the display for going one step back is now flush with the glass panel. There is no indent anymore. Honestly, I prefer this design. On the rear, you get the two-pin Pogo pin connector for the charging cradle. I still find it annoying that you have to take the module out of the strap to charge it. Apart from the two-pin connector, there’s also the blinking heart rate sensor. 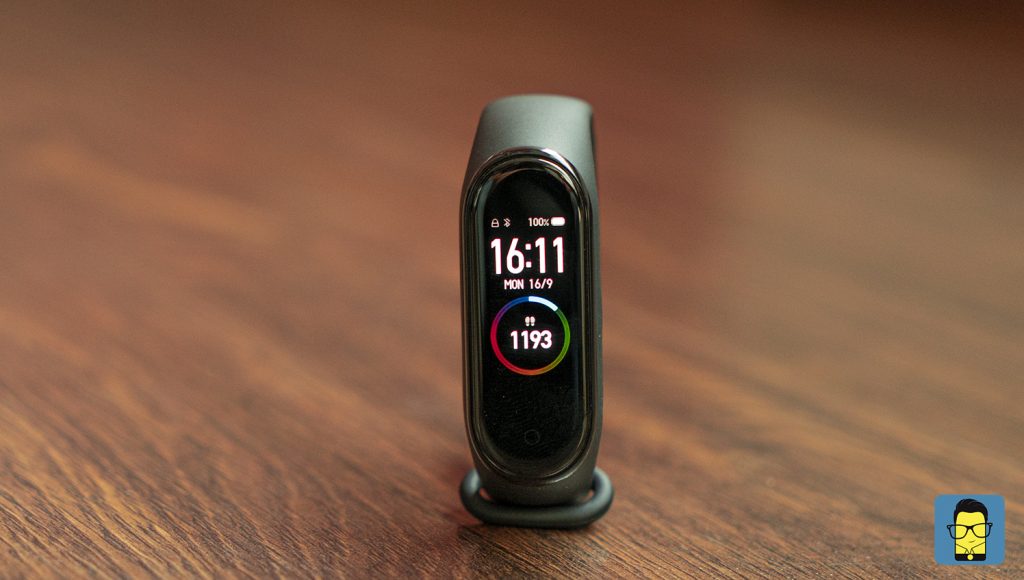 As for the comfort, I found the thermoplastic polyurethane strap to be very soft on the wrist. Also, I like the pin-and-tuck mechanism of the strap. No complaints there. As a matter of fact, if you don’t like this system you can get a replacement for a regular watch strap as well. By the way, the Mi Band ecosystem has evolved to such an extent that finding a different coloured wristband or a metal one shouldn’t be difficult. In fact, there were quite a few already available on Amazon India even before launch. Moreover, the Mi Band 4 weights only 22.1gm and there were times when I forgot they were even on my hand.

Coming to the 0.96-inch AMOLED display on the Mi Band 4 with 2.5D curved glass; it is crisp, bright, and colourful. This is the biggest change from the previous edition Mi Band. And, I am sure that Mi Band 3 users are going to lust after the AMOLED display now. 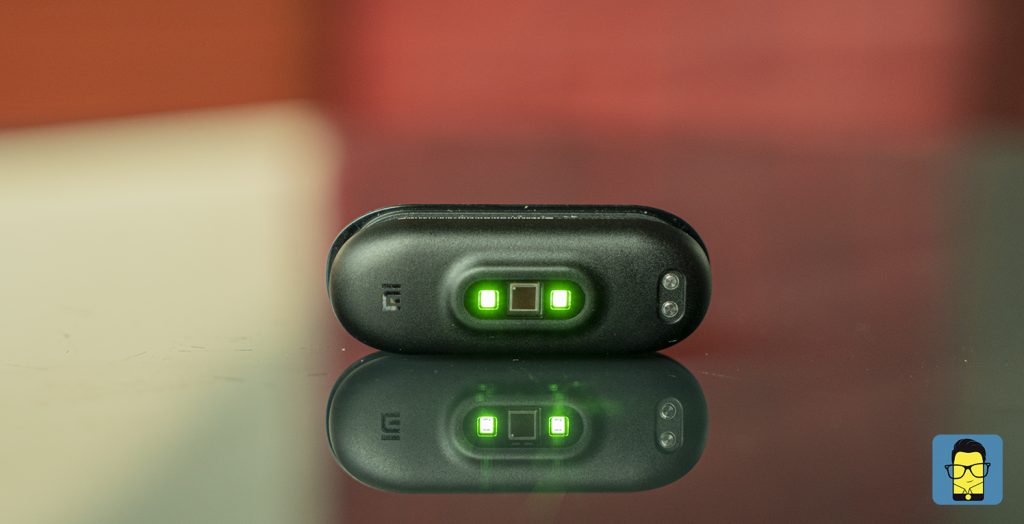 And, why shouldn’t they? The 120×240 resolution panel can go up to 400 nits of brightness. You have the option of choosing from the 50 odd watch faces in the Mi Fit app. That’s not it, you can have a custom watch face as well. That said, the touch sensitivity is not the best out there. It is good enough in most scenarios but once in a while, you will face a situation where your touch hasn’t registered.

I know you have been waiting for me to answer this question. How is the step tracking? Cheap fitness trackers drop the ball on that aspect is the general consensus. So, I decided to the testing manually. I walked and counted 500 steps, and then lined it up against the Mi Band 4’s data. You’d be surprised to know that the difference in step count was not much. The Mi Band 4 calculated around 504 steps. Great job, Xiaomi. That said, the problem is the sensitivity in step tracking. Sometimes the Mi Band 4 also counts step when you are just moving your hands. And, that’s where brands like FitBit and Garmin are better. 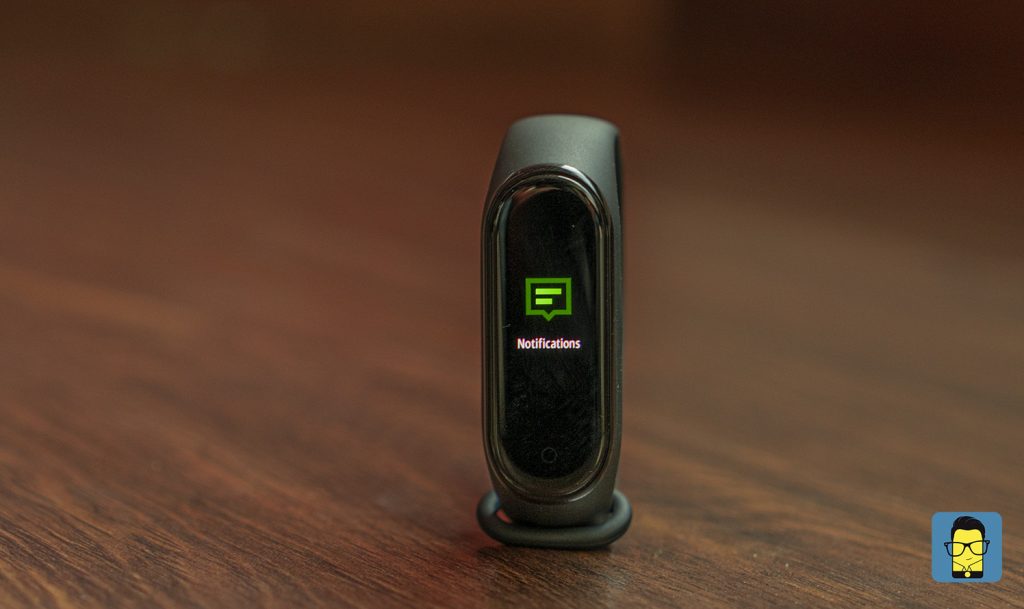 Apart from this, you get alerts if you’ve been sitting idle. And, of course, there are workouts that you can start directly from the Mi Band 4 itself. While you can track your regular Treadmill, Walking, Running, and Cycling, you can also track swimming now. Swim tracking on the Mi Band 4 allows you to set the size of the pool and even track the type of stroke using the Mi Band 4. Yup, the Mi Band 4 has a 5ATM rating which means that it is water-resistant up to 50 meters in depth for 10 minutes. I didn’t get a chance to test it out but having this feature alone is a major advantage if you ask me.

There’s an always-on heart-rate tracker that checks your heart-rate at pre-determined intervals. The lowest interval you can set is 1-min. This tracker is then used by the Mi Band 4 to also track your sleep cycle. Sleep tracking works automatically in the night when you wear it and go to bed. But, it seems to work only in the night and not if you take an afternoon nap. Sleep tracking works extremely well and it gives you a detailed breakdown of the levels of sleep. Not just that, it gives you a data analysis of what you should be doing to sleep better. Take a look at one of my charts below for reference. Also, wearing the band to sleep is a no-frills affair considering the light weight. 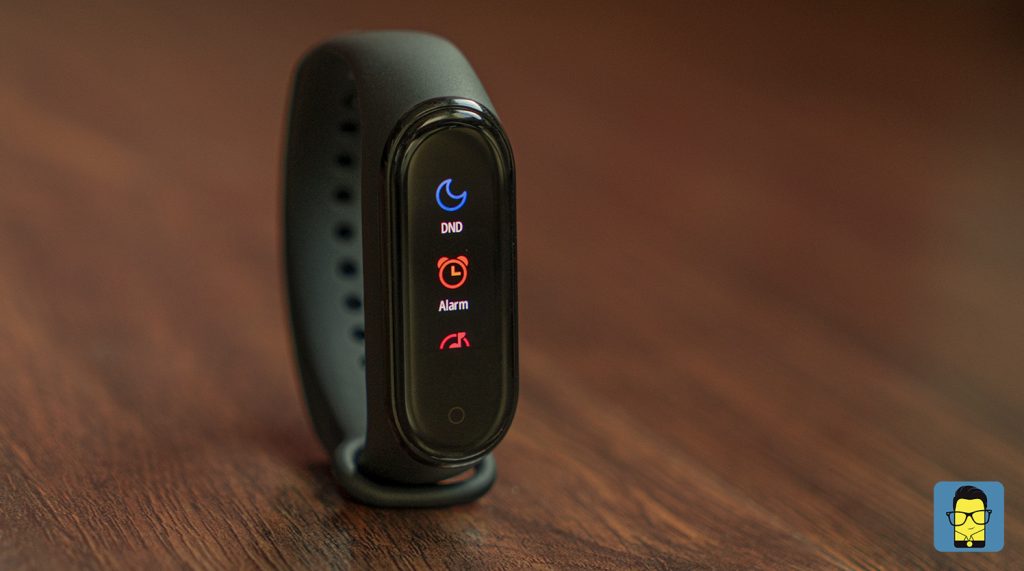 The Mi Fit app is not too bad. It works well and the UI looks decent too. But it is no FitBit app, that I have to tell you. The social aspect is not done too well. And, the data visualisation could’ve been more interesting. If like Google Fit (I don’t), you can also move your Mi Fit data to Google’s app. 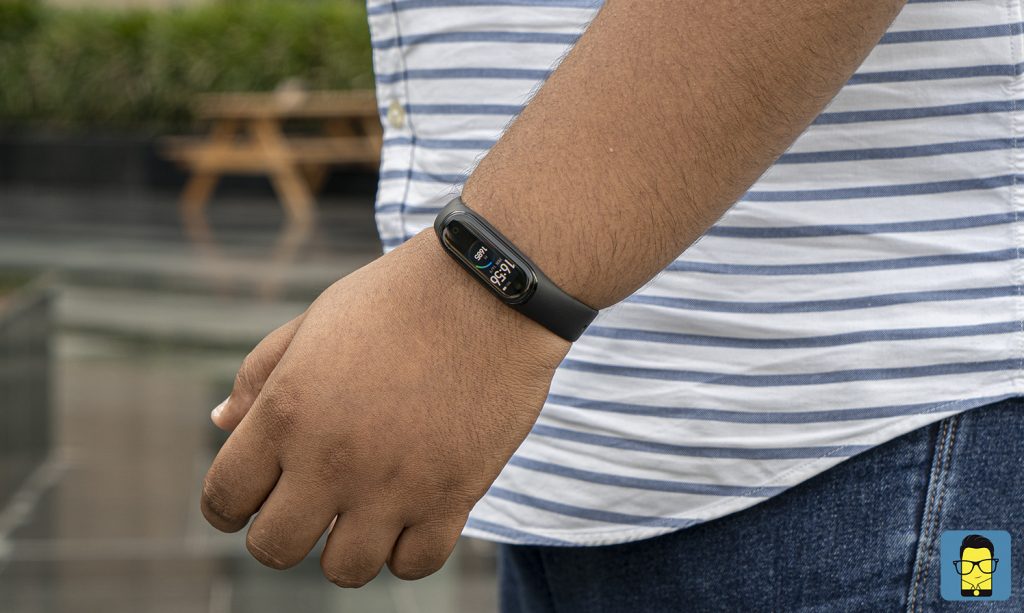 The Mi Band 4 is not just a fitness tracker. It can also send you notifications from your apps of choice. However, these notifications are not actionable. In fact, you cannot even open them on your phone from the app. That said, you can add custom vibrations for app alerts if it is any consolation. Apart from cancelling the calls, you can also mute it. This is something most fitness bands cannot do.

A new feature — in lab testing phase — is that you can set a lock for your Mi Band 4. This 4 number lock (only numbers 1, 2, 3, 4 are available for variations now) triggers when you take the band out of your hand. It works really well. You can also set vibrating alarms for what it is worth. 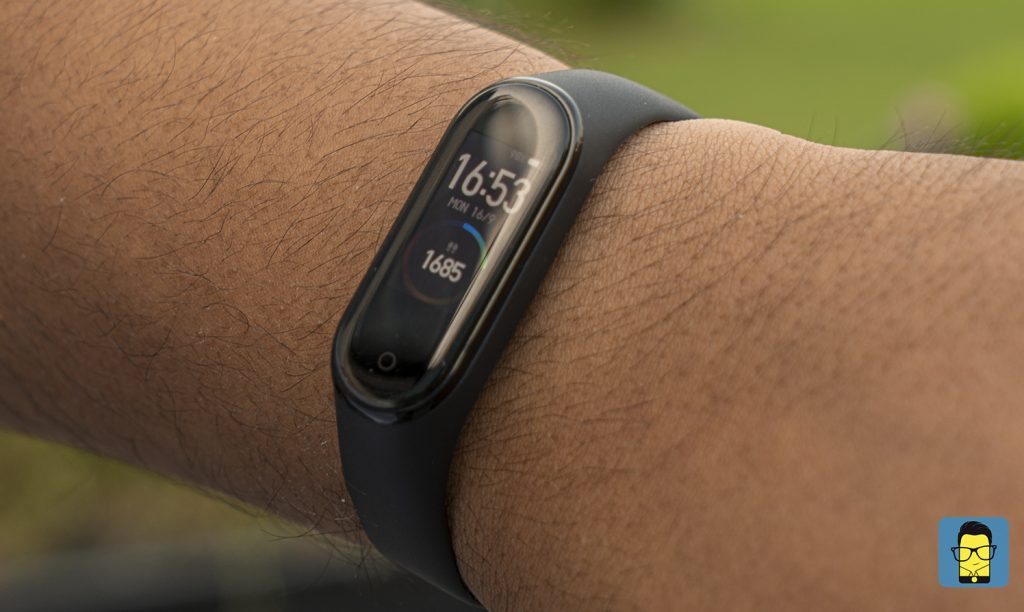 Coming to the performance of the upgraded 135mAh battery inside the Mi Band 4, it is pretty good. I took it out of the box and it was at 40%. It lasted me 3 days and 15 hours with heart rate tracking at 1-minute intervals, full brightness, notifications on, and step tracking. Extrapolating this battery date, you can easily expect close to 7 days of battery life from the tracker. This is not quite the 20 days as promised by Xiaomi but you can expect 20 days with limited usage. Charging the battery from 0 to 100% takes 1 hour and 46 mins.

Should you buy the Mi Band 4?

For its asking price, the Mi Band 4 is an easy recommendation. For its sticker price, the Mi Band 4 doesn’t need to do all the things that it does. Despite that, Xiaomi has really squeezed out every penny’s worth from the Band 4. Tell me which fitness tracker gives you music control and one that works with any third-party app? 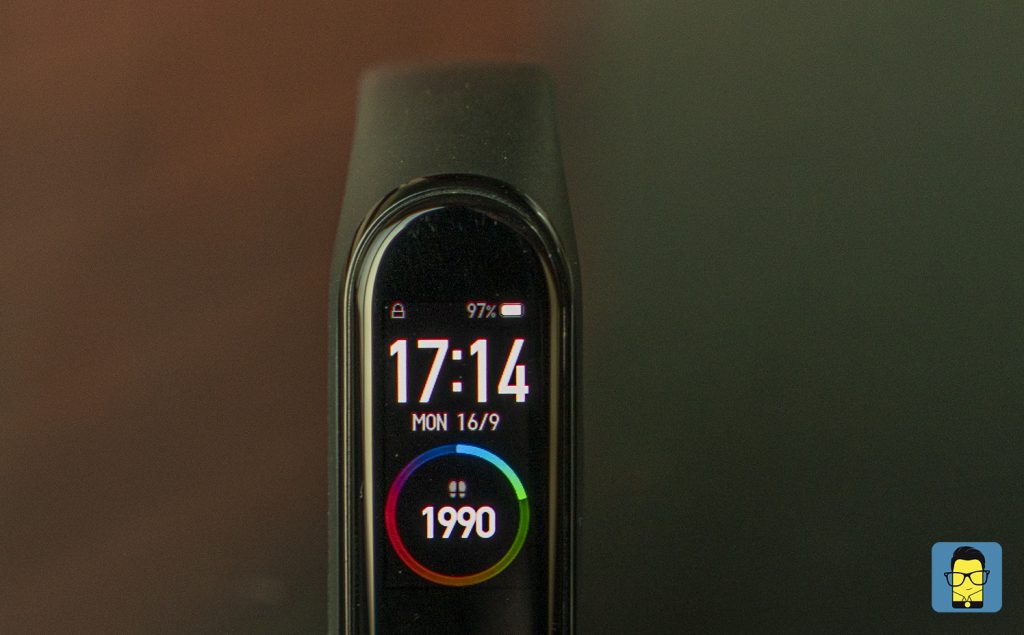 The closest competitor is the Honor Band 5. While Honor’s fitness tracker looks and feels more attractive, the Mi Band 4 has more finesse to its approach at capturing and showcasing activity tracking data. Everything else, including the Samsung Galaxy Fit, Fit E, Fitbit Inspire HR, and more feel expensive in comparison. Now, I like some of Amazefit’s watches. However, I haven’t used them enough to know how they fare. But the fact that they look like smartwatches gives them a leg up for one.