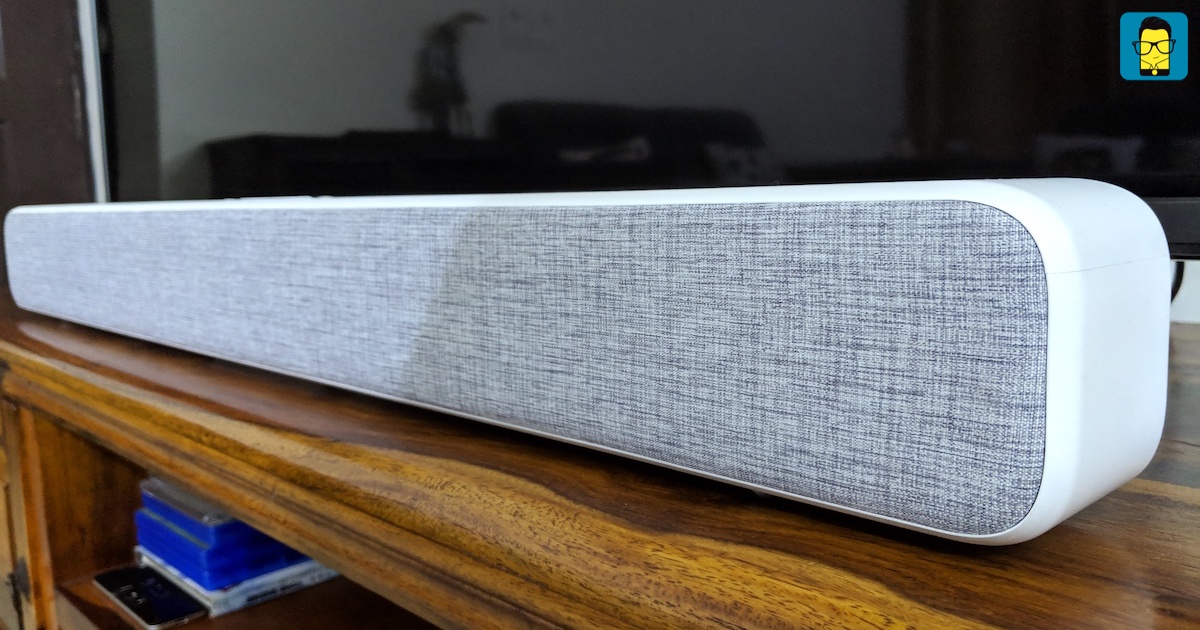 Cutting it straight, most Televisions that are sold in India come with really substandard speakers. For example, the one on the Mi TV 4X Pro that I am reviewing parallelly has extremely meh 20W stereo speakers in-built. I’d cut off my ears than watch any content on those speakers (more in my full review soon).

In that scenario, it becomes imperative that you buy something to improve the sound quality. And you know what? Xiaomi makes it easier for you by now offering the Mi Soundbar in India. This entry-level Soundbar costs just Rs 4,999 and looks like a very tempting option.

Well, I’ve replaced my Bose Soundlink III BT speaker with the Mi Soundbar just for you guys. What follows is my personal account of using this new soundbar as my primary TV speaker. 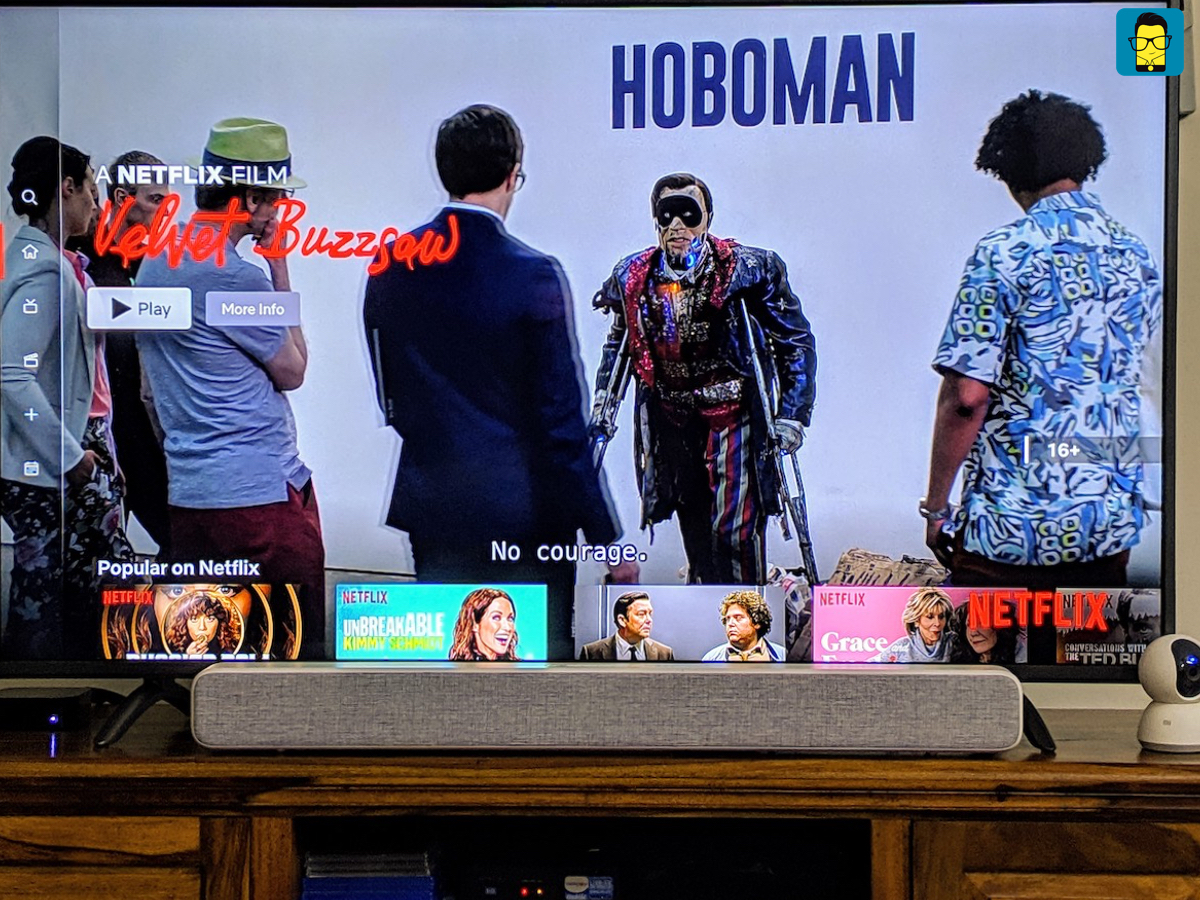 The Mi Soundbar comes in only a single white colour variant with a grey accent. Essentially, the white colour is the plastic exterior of the soundbar. Using plastic as a material helps keep the weight around 2kgs too. It is fairly light for a soundbar. Giving the Mi Soundbar a little bit of visual flair is the grey fabric mesh on the front that conceals the eight drivers inside.

It is eerily similar to the Google Home that sits right beside it in my house. But, I’m not complaining because the design is definitely classy. To think about it, I’d have loved a black colour option because white does become dirty over time. No escaping that truth. 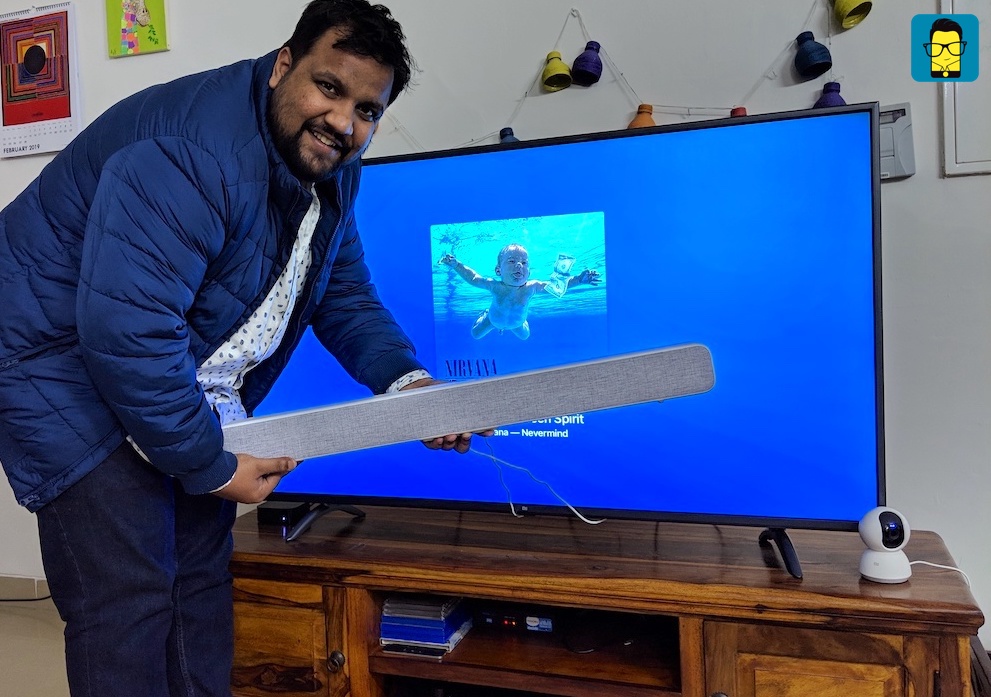 Talking a little more about the ID, the smoothened out curved corners are a deft touch. I’m not really a fan of sharp corners like the PS4. Also, while you can place it on your TV stand as I did, you can also wall mount it if you wish. All the ports are easily accessible on the rear, even if you wall mount it. How? Well, these ports are situated inside a crevice and you can easily feel for them. The crevice has the power button and the power source, apart from the 3.5mm audio port, Line-In, S/PDIF (with a very high-quality cable bundled in the box), and Optical out. Furthermore, you can also connect the speaker using Bluetooth 4.2 LE. Only a single connection at a time, though.

The buttons to switch between the different sources are on the top. They offer great tactile feedback and there is a small white LED indicator on each source to indicate that it is on. The source buttons are all pill-shaped, while the volume buttons are big and round. That said, the lack of a remote us a major, major hassle. I couldn’t switch between sources on the fly — and I had a TV connected to the S/PDIF, a PS4 on optical out, and an Apple TV via Bluetooth.

Internally, the speaker uses an eight-driver setup as I mentioned earlier. There are two 20mm tweeters on the extreme ends for a clear treble response, two 2.5-inch bass speakers with four more passive radiators accentuating the low end of the frequency spectrum. This setup can push from 50Hz to 25,000Hz on the frequency range. It can also deliver 28W of “pure stereo sound.” 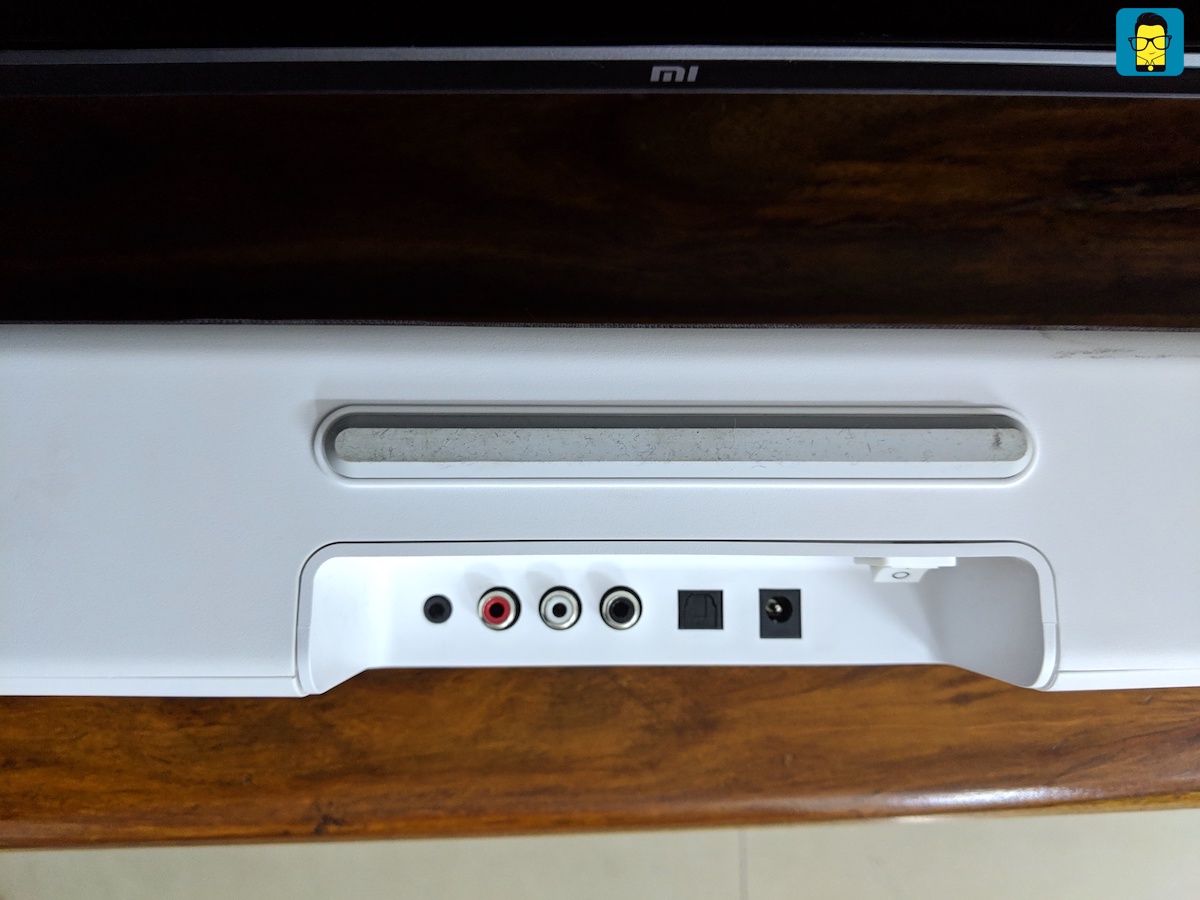 Before I talk about the sound quality, I want to mention a peculiar problem I faced with the BT connection. When I connected the TV to the speaker wirelessly, the connection kept dropping or the audio kept skipping when I switched to another HDMI source. Moreover, there is a definite audio lag when playing via BT. I mean, it is not so bad that regular people can find the minute difference in audio and video playback, but it is there. 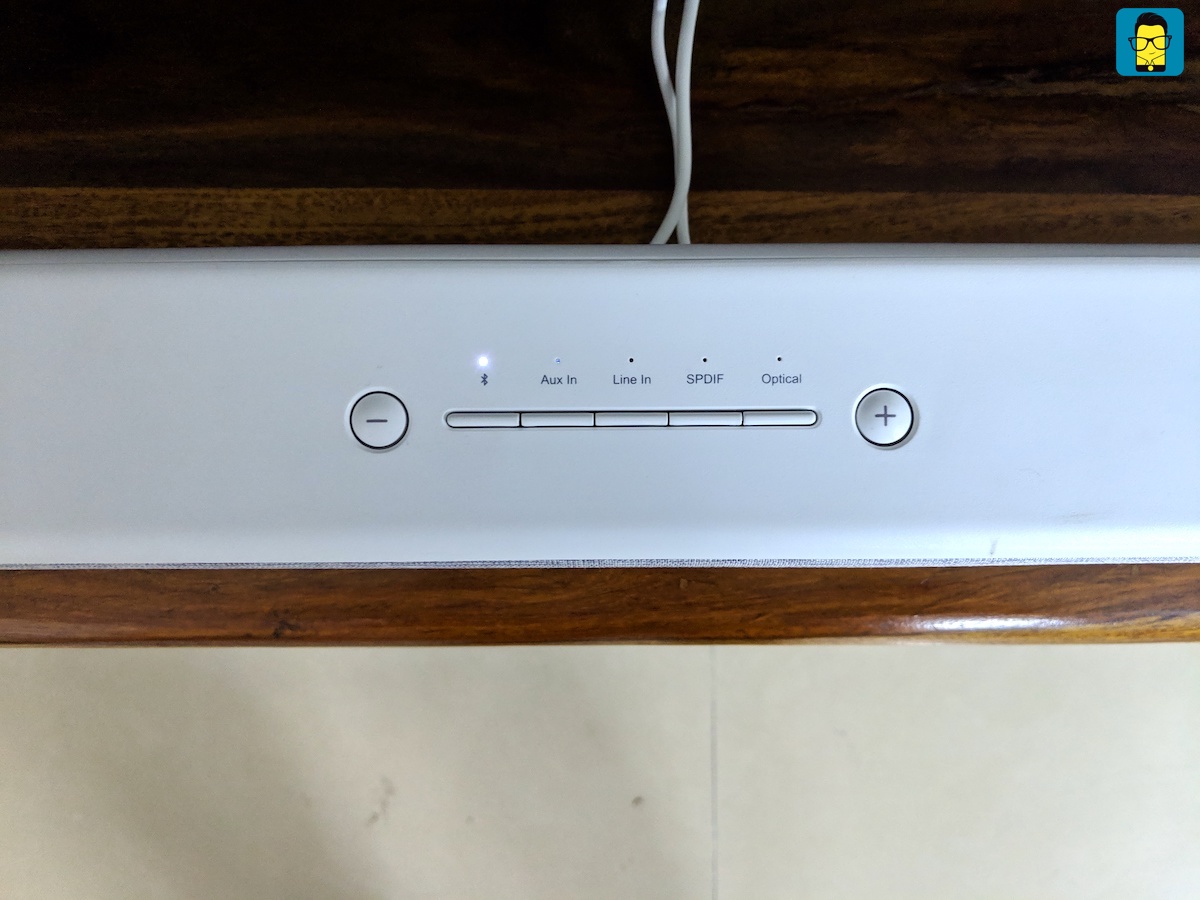 Another thing I noticed while playing audio through S/PDIF from my TV connected to an Apple TV as the source, the audio would not play on streaming apps like Netflix, Hotstar, and Prime. I later learned that it was because the Apple TV was outputting at Dolby 5.1 standard and not PCM Stereo. Mi Soundbar doesn’t support Dolby content, basically. Not a problem as such, just that it is not ideal for a surround sound Home Theatre setup. It is meant mainly for two-channel audio. No wonder all the marketing material kept saying “pure stereo sound.”

Although, that’s totally fine because it is a Soundbar, and I haven’t heard a single Soundbar till date that should be part of a legit videophone/audiophile-grade surround sound setup. Get more speakers for that. No seriously. 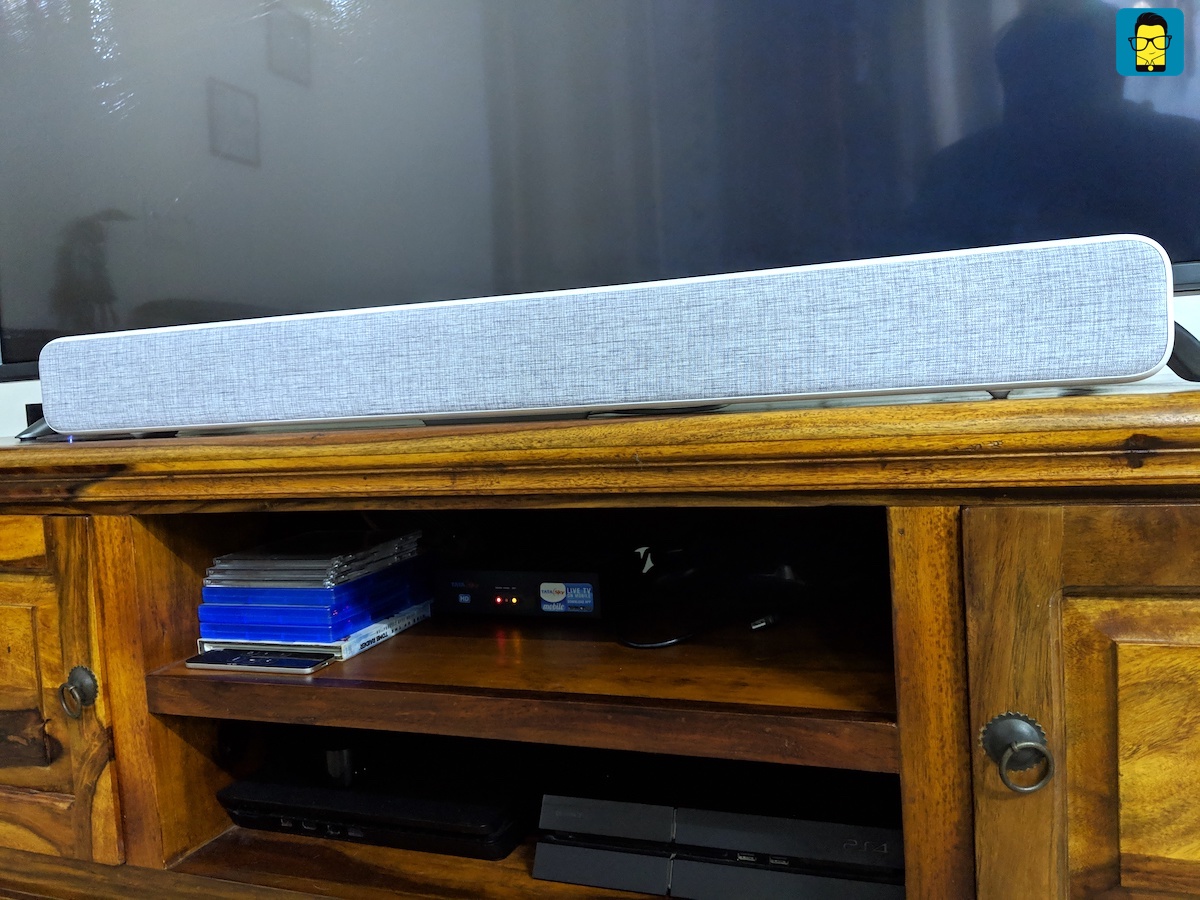 Anyway, coming to the quality of the sound — I tested using it S/PDIF because Bluetooth audio sounds very average in comparison — the two tweeters at the extreme ends push out a pristine treble performance. And since, they are placed so far apart from each other, there is a semblance of stereo separation that you can’t get from standalone BT speakers. But once again, it is no match for two separate speakers. Let me tell you that firmly. The bass performance of the Mi Soundbar is what sets it apart. Thanks to the dedicated drivers and passive radiators created especially for the bass performance, you get a fair amount of rumble.

I didn’t miss a dedicated woofer, honestly. That said, my hall is around 200 sq.ft in size and if you have the Mi Soundbar in a bigger room you might need a bit more power. A proper amplifier could possibly help the cause. Or, maybe not. I don’t know cause I don’t have one. (Mental note: need to fix that situation) 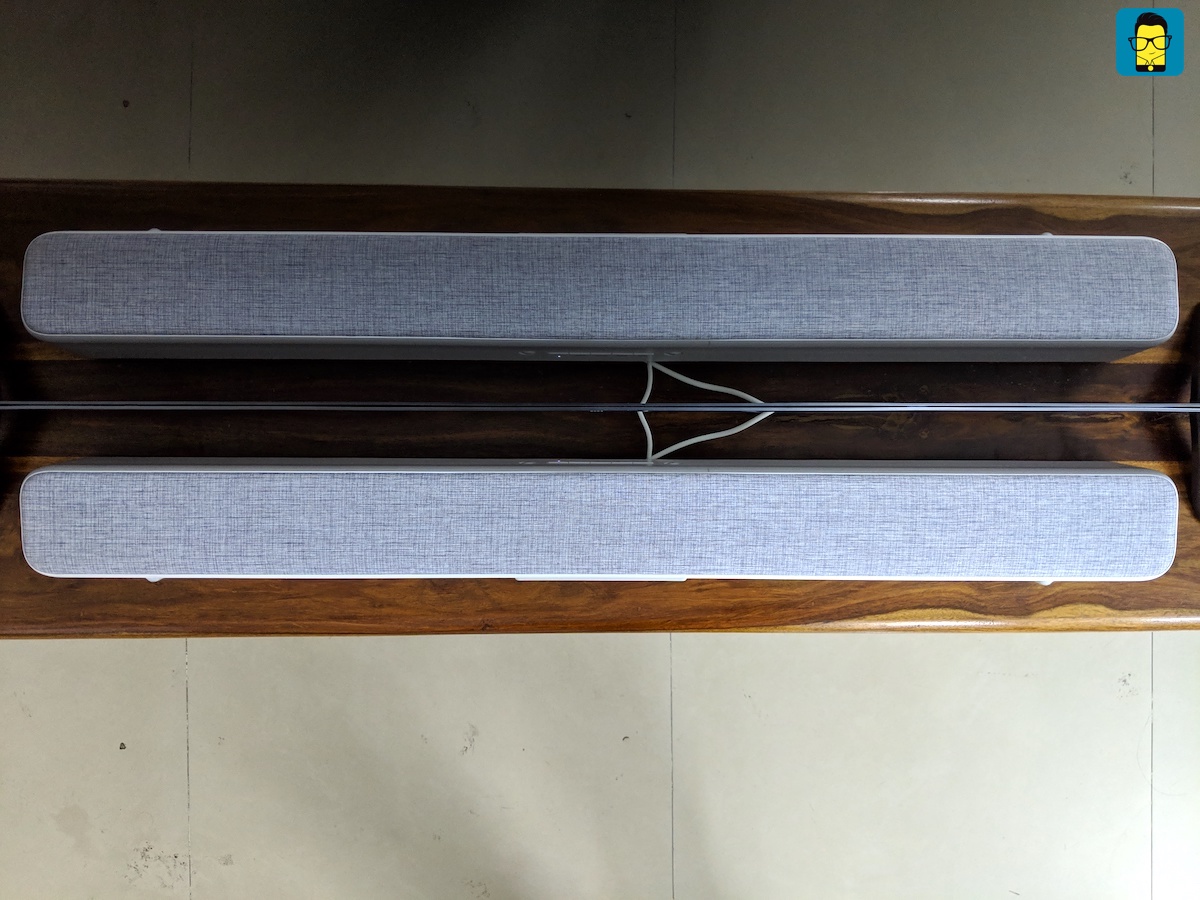 My only concern with the Mi Soundbar is the slightly recessed mids. I wasn’t really happy with how Benjamin Clementine sounded in Nemesis. The fullness in his voice and the detail was missing. And therefore, sometimes the loud sounds in movies can muffle the dialogues. This is due to the fact that the bass and the treble overpower the mids at times. It is not a major issue as such but I’d have liked some more attack. If it were up to me, I’d have ideally replaced a couple of the bass radiators for dedicated drivers for the mids. Along with the tweeters, it would have been one stunning setup.

Talking about movies and TV shows, you are going to enjoy using the Mi Soundbar with your TV because of the pristine reproduction and the excellent imaging. It is not quite the “cinematic sound” – as the company claims – but it does come close. You get a mostly clean sound, free of any distortion. It really doesn’t sound like a 5k soundbar in such a scenario.

Overall, the Mi Soundbar is clearly punching above its weight when it comes to its clean sonic performance. 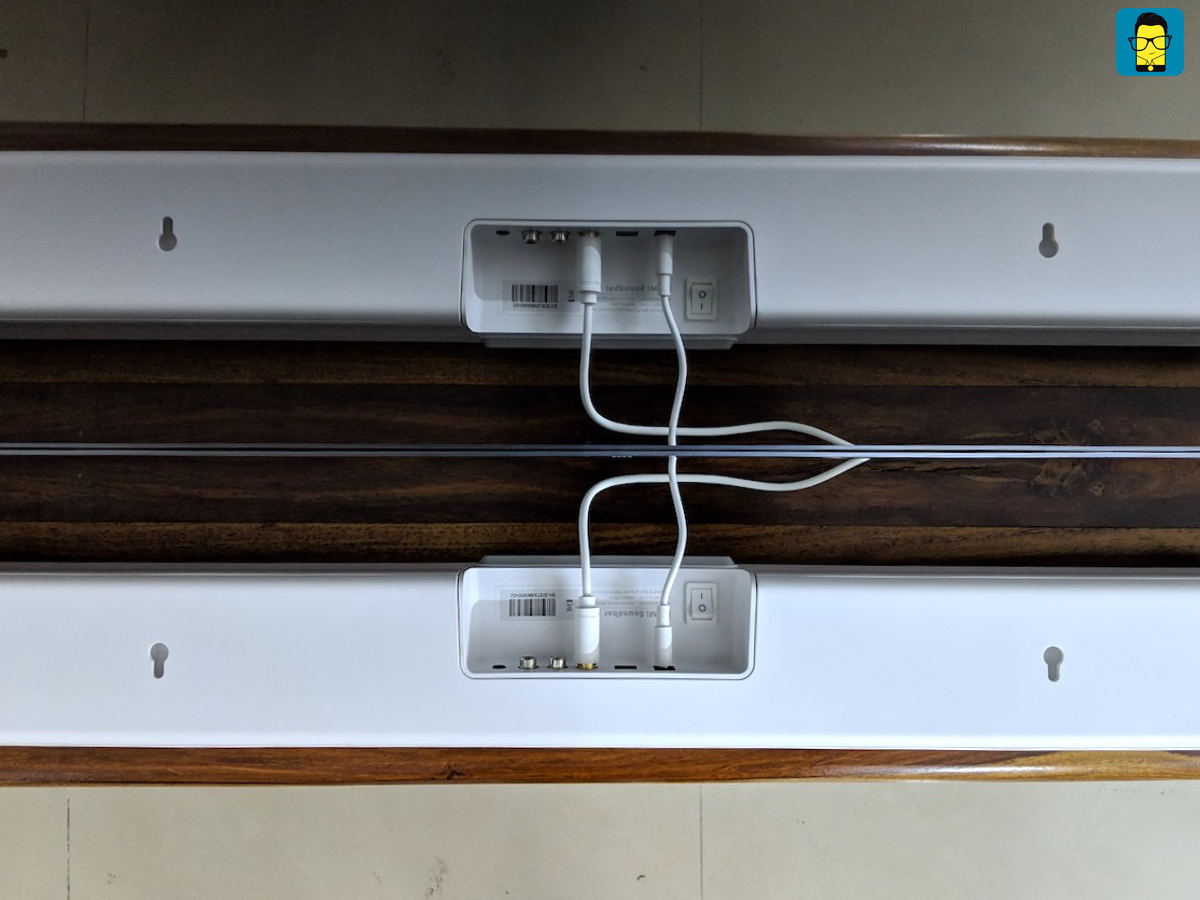 Should you buy the Mi Soundbar?

The more I think about the Mi Soundbar, the more I’m convinced that Xiaomi is trying to carve out a niche in areas where there could be maximum uptake. Honestly, there is very little credible competition from competing brands in this price range. The Mi Soundbar should fly off the shelves, if it hasn’t already, by the time I publish this review.

And, why shouldn’t it? At Rs 4,999 the Mi Soundbar is an unfair advantage for consumers. Apart from the bargain basement pricing, the Mi Soundbar also offers a clean sound, visually attractive design, and a good number of connectivity options. 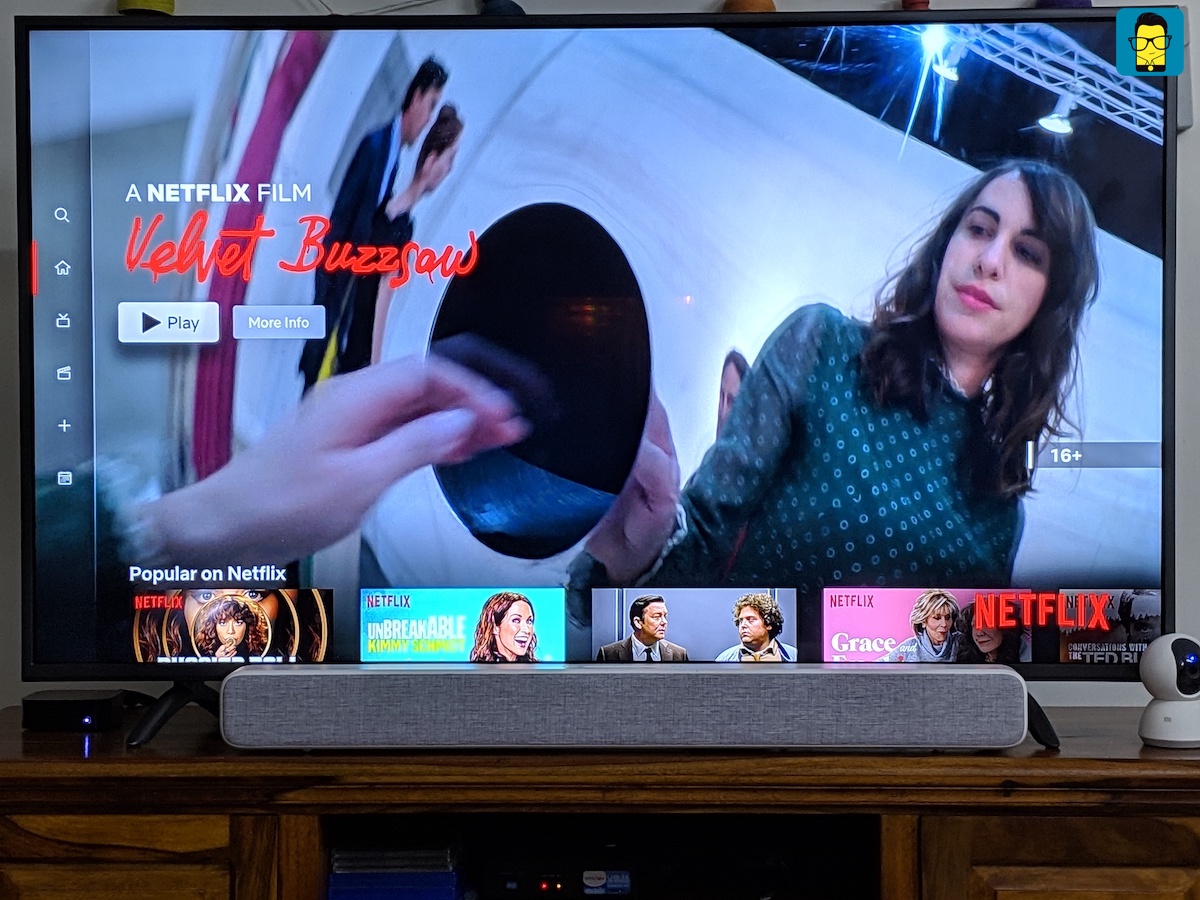 The cons – like the lack of a remote and the slightly recessed mids – can easily be overlooked. I’m fairly certain that not many Rs 5,000…heck, even Rs 10,000 soundbars sound this good.

But, the bigger question here is – do you really need a soundbar when you can work with a regular 2.1 channel setup desktop speakers that will offer a proper channel separation? Hmm…decisions…decisions…