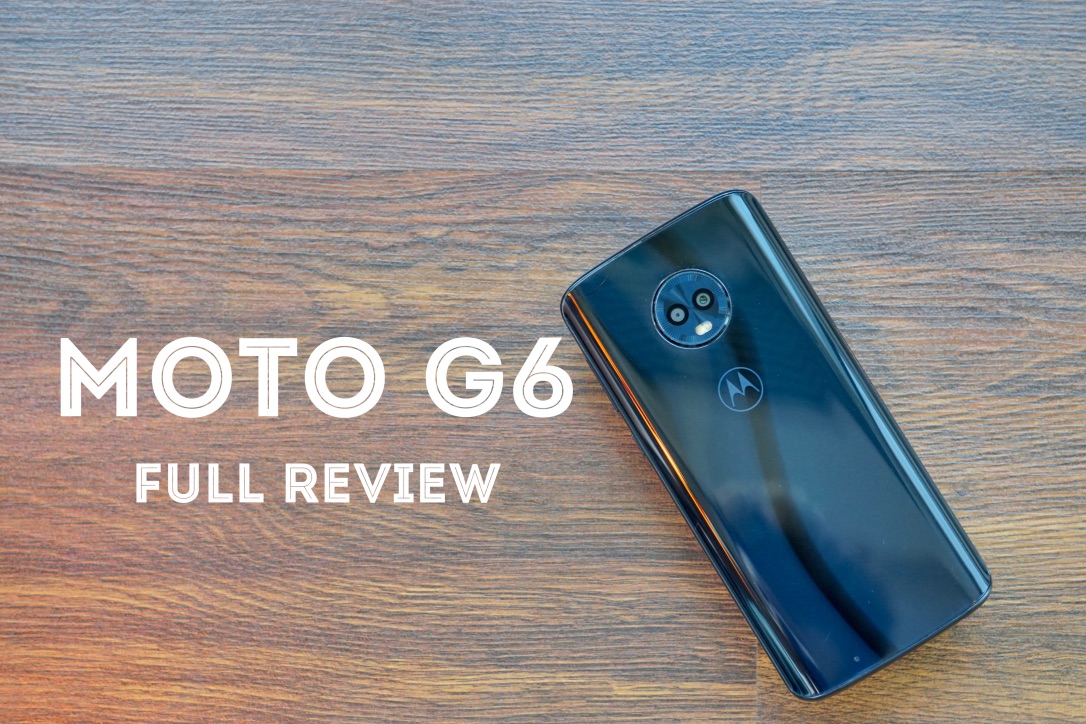 Motorola has followed the function-over-form philosophy since the first Moto G and Moto X devices that didn’t necessarily look stunning but were beasts when it came to function. Well, this time it seems like folks at Motorola were pushed to win the best-looking award. They certainly have succeeded in their efforts when it comes to looks but has Moto amongst this design rat race let loose of some other important parts. Read our full review of the all-new Moto G6 to see if this glass-clad moto is worth it or not.

Well if you thought only premium phones had glass backs, think again because the Moto G6 here is one of the finest implementations of a glass design. The back glass makes this S-like pattern when light falls on it and the dark blue color is equally unique. 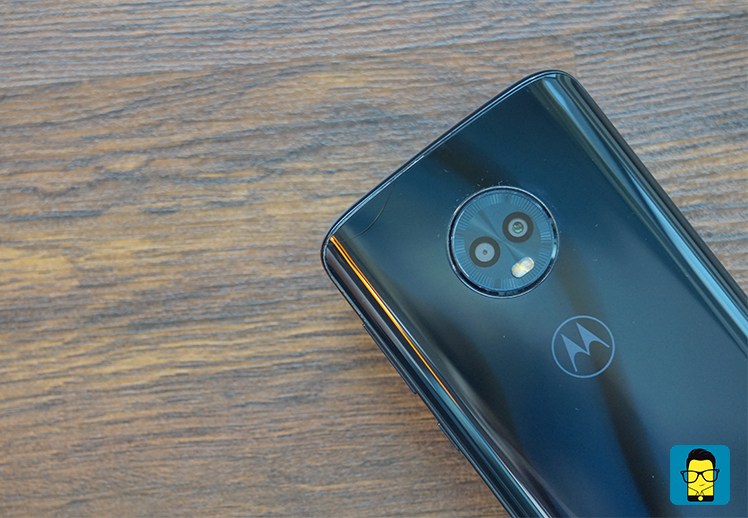 The back is not exactly tapered, but there is a noticeable curve to it which makes it easier to handle. The sides are glossy too, although I’m not sure if they’re made out of plastic or metal. The good thing here is that they feel very sturdy and look like they could take a fall unlike the glass back. Also, I don’t know why, maybe my dry skin type or the smooth glass, this phone seems very slippery. Generally, manufacturers do provide a clear TPU case inside the box, but during cost-cutting, Moto seems to have chosen to exclude that. If you do end up picking one of these up then I’d strongly suggest you buy a case for it.

The Moto G6 has well-built buttons and is one of the very few phones in its price range that comes with a USB-C port. Now, it also sports the headphone jack and no speaker grill at the bottom. This is another place where the Moto G6 lacks behind a bit, the speaker quality is just below par although you do get some decent volume out of it. All in all not the best choice for someone who values good speakers.

I also have to tell you that while the call quality is quite good, there is a small lag to the other side whenever I pick up the phone. So every time I pick up a call I’ve to wait for a second for them to start hearing me and while I’ve come to terms with it, it’s something that should be pretty easy to fix.

Moto G6 along with its siblings became the first Moto phones to implement tall 18:9 displays and looks like they did a good job. The panel is at a Full HD+ resolution and it is actually quite good. The colours and details are on point and it’s just a fun experience to do things on this display. The brightness levels are quite good too, even in bright sunlight I was able to clearly see things on the screen. Now the color profile is also quite saturated for an LCD display, it still stays away from looking cartoony but I’m a fan. 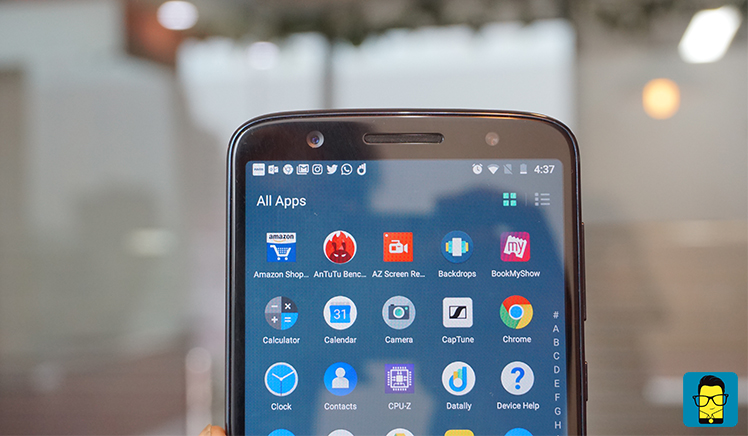 The corners of the display are curved and that definitely adds a premium look to it. The whites are also quite accurate and I have had a ball carrying it around.

Motorola was resurrected the day Google bought them and they have been pure ever since. Clean stock android is what makes the software experience on Motorola phones so smooth. The Moto G6 comes with Android 8.0 Oreo out-of-the-box and while software updates have been hit or miss for Moto, I’m not worried. The Software performance is just unbeatable and while there are other near stock phones like the Asus Zenfone Max Pro M1 in this price range, it feels way more refined. The whole UI is pretty much close to stock with the app drawer being a transparent one. The settings page also looks pretty standard and you get all the settings organized neatly thanks to Android Oreo’s smart grouping. 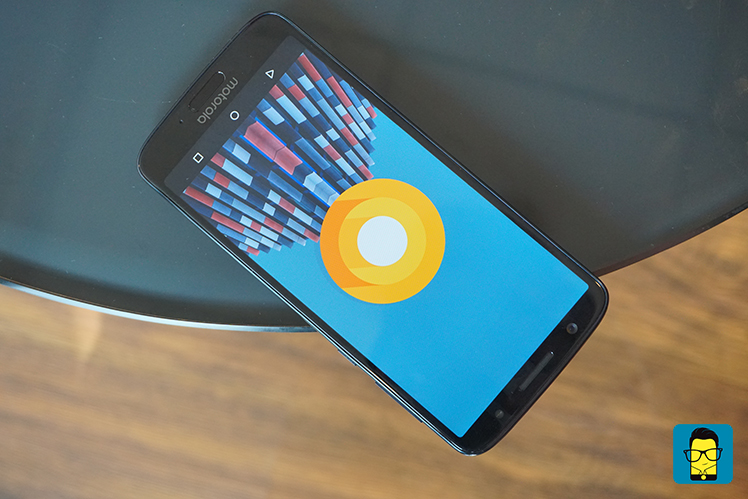 Motorola does have some proprietary features on all Moto phones and these all sit inside the Moto app. There’s a Moto Key which works exactly like google auto-save and is more or less irrelevant because of Google’s work across multiple platforms. You also get Moto actions which are basically various gestures like three fingers tap to take a screenshot, swipe down from the centre of the screen to shrink the screen, and obviously the very popular chop-chop for flashlight and double twist to open the camera. You also get Moto Display which is the always ON display and has been on Moto devices for a long time. Moto Display is my personal favourite because apart from glancing at the notifications you can also interact with them and even reply to texts all without leaving the lock screen which is pretty neat.

It also has Dolby Audio toggle which significantly enhances the audio quality through earphones.

Now let’s quickly talk about security or biometric unlocks here. The Moto G6 comes with a fingerprint scanner, but unlike the Moto G6 Play it sits on the front chin. Now, that’s mostly because the glass back makes it difficult since the fingerprint scanner would’ve meant another cutout hence even reduced sturdiness.  However, the one good thing is that it’s a very good fingerprint scanner and probably one of the best after OnePlus’ scanners. Then there is Face Unlock, which feels like it was put there without a lot of thought. It does work quite well when you are looking directly at it but completely fails even if the angle is a little off. It’s neither reliable nor is it fast so, there is no point in it being there unless Motorola works on it and pushes an update to make it better.

All in all, you get a very good software experience on the Moto G6. 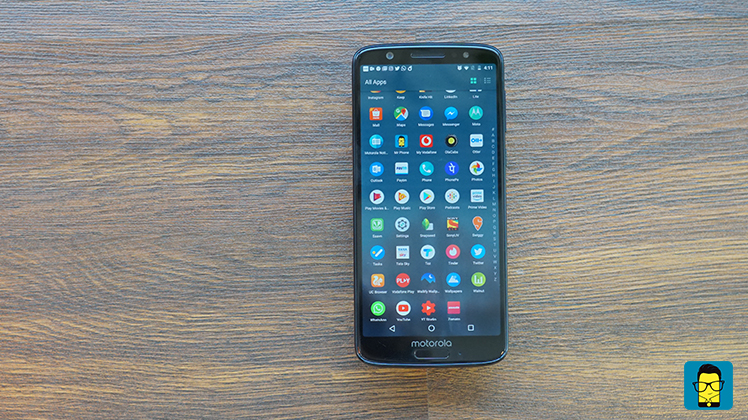 Now, I am someone who never judges a phone by its processor and even after hearing that the Moto G6 is running on the 450 I was quite excited to see how Moto has optimised it for performance. Well, I was not entirely disappointed but neither was I surprised. Surfing on it was still smooth and there were rarely any stutters, however, as I started loading more and more apps on to it, the performance throttle was visible. This kind of a performance could’ve won hearts last year, but with powerful chipsets like Qualcomm’s own Snapdragon 636 and Helio P60 with flagship grade performance, the 450 just doesn’t impress.

Now that said, for someone who doesn’t play a lot of games or doesn’t really do intensive tasks on her/his smartphone, this should work perfectly fine. In fact, the RAM performance was surprisingly good for 4GB RAM. I’ve seen a lot of other phones with more RAM performing poorly. The G6 generally kept apps in memory for long sessions and there were times when I was surprised to see those apps I used quite a while ago load instantly.

Moto G6 Camera: good results, not so much the experience

The Moto G6 brings back the dual camera setup we saw on the Moto G5 Plus but in a different configuration this time. The G5s Plus had dual 13MP sensor both at an aperture of f/2.0, well this time the primary camera sits at 12MP at a bigger aperture of f/1.8 and the secondary lens is a 5MP lens for depth effect. Why does this look like a downgrade? Believe me, it’s not, the megapixels have significantly reduced at first glance but that’s not entirely true. Even though the Moto G5s Plus uses two cameras, the picture is being taken using only one of them and the other one is only there for depth information so your photos come out to be only 13MP and not 26MP. The new Moto G6 has a 12MP sensor so the loss is just 1MP but the f/1.8 aperture would mean much better pictures especially in low light. 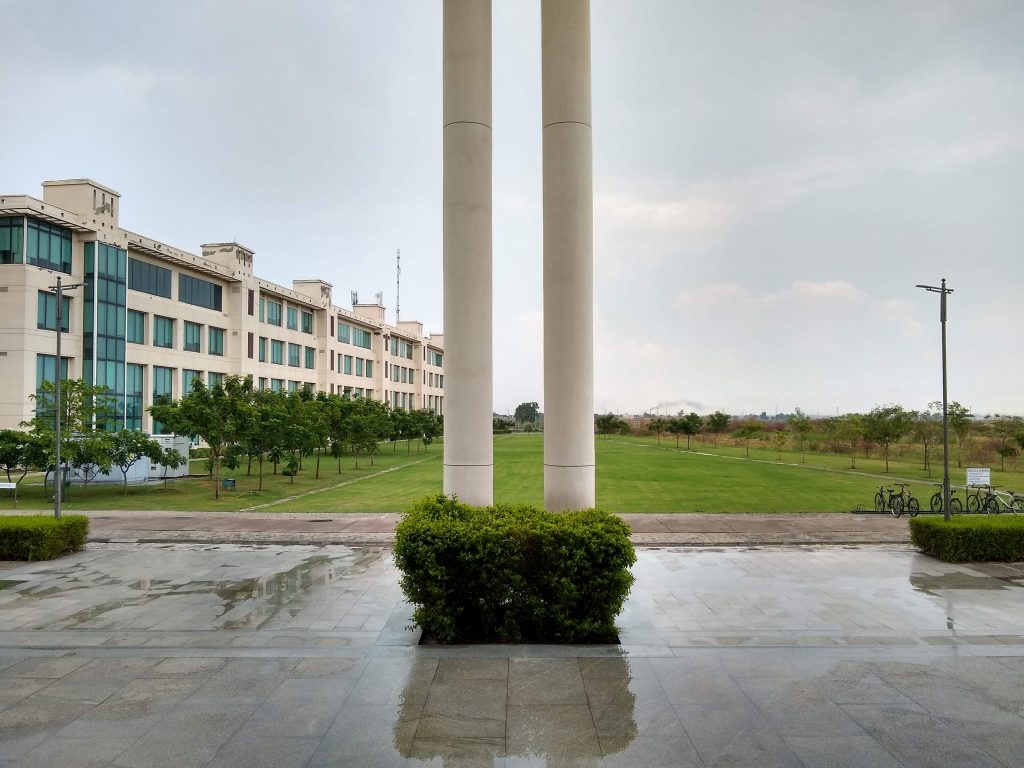 The images do look great in daylight and look equally good or even better than other mid-range devices like the Redmi Note 5. The colours look good and the details look very well preserved. The one complain I again have and this has reached its peak because this has been a problem for a very long time and I think it’s just ignorance now. The viewfinder is just so bad that there were times I just didn’t want to click a picture because it looked so bad through the viewfinder. Now, this would’ve been an okay thing if that camera quality was bad. That’s not the case. Pictures look way better than they look in the viewfinder.

This time the HDR option is also quite aggressive and I just like the pictures that come out.

Now the other thing I’ve had a problem with is the speed with which it takes a picture. Things were smooth in the beginning, but now it straight up lags at times and I would’ve loved it to be a little faster. This is something Motorola can fix through software updates and I hope they do because the pictures that come out right look pretty good.

Coming to video the Moto G6 can shoot up to 1080p@60 fps and that makes it one of the very few phones that have that feature.

The Moto G6 comes with a 3000mAh battery and it works like any other smartphone battery. It gives anywhere from 3-4 hours of screen-on time and in real-world usage a full day of casual use. I never had to plug the phone before the end of the day which is to say that you’ll have a stress free experience with it. 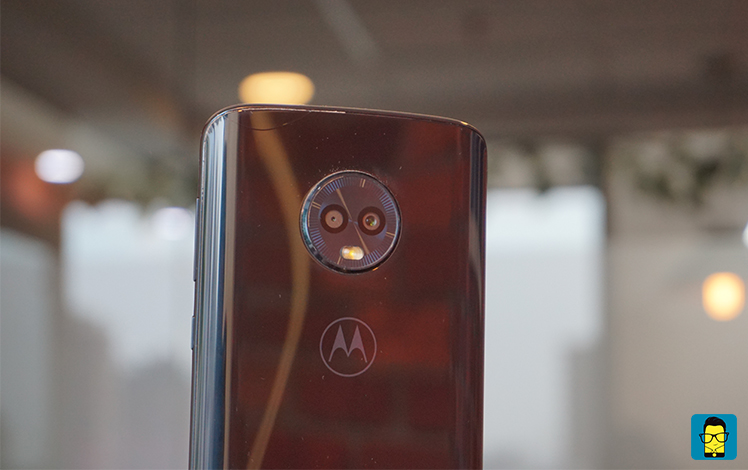 You also get the Moto turbocharger with it and it is probably one of the best features of this phone. The Moto G6 gets a full day’s Juice from just an hour on the wall.

Moto G6 Conclusion: get it for the looks

The Moto G6 comes with its flaws but also comes with a lot of upgrades. So if you are someone who wants to have the best processor at this price and wants to play a lot of games on it then this is not the device. But if you are someone who wants a premium looking phone with a sleek design, loves to have the simplicity of stock android and doesn’t mind the small issues I’ve mentioned in the camera, then this is probably the device to go for this.