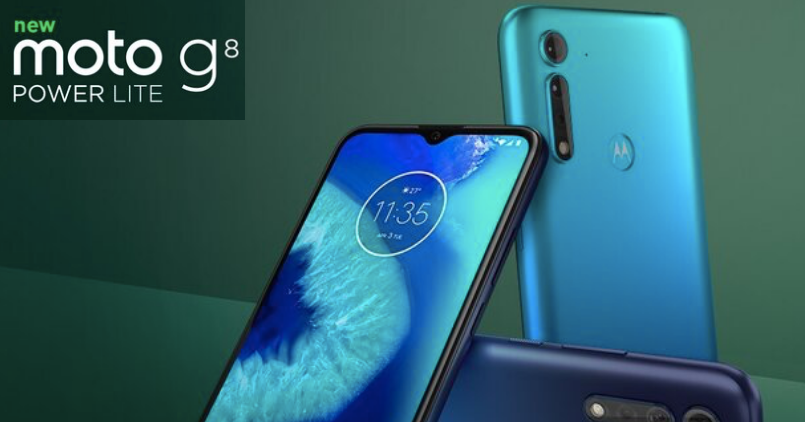 Motorola has launched its all-new smartphone after it recently unveiled the G8 Power. The new phone is a variant of the G8 Power and is dubbed as Moto G8 Power Lite. It is priced at Rs 13,999 approximately, 169 Euros to be precise. It’s launched in Mexico and Germany and will be heading to Latin America, Asia, Australia, and the rest of Europe over coming weeks. Let’s talk about the specifications and features of the phone.

Sporting a 6.5-inch HD+ resolution LCD screen, it comes with a 20:9 aspect ratio. It has a waterdrop notch design as you can see in the pictures. There are no more interesting points to share regarding the screen on G8 Power Lite. Moving to the internals, it is powered by a MediaTek Helio P35 SoC, which is an octa-core processor.

You’ll get a 64GB of storage on this Moto phone. It’ll be accompanied by a 4GB of RAM. There are no other configurations announced by the brand. It will have a storage expansion support via microSD card slot, up to 256GB support. It will be running on Android 9 based interface with Moto’s useful embellishments.

Talking about the camera department, it will be sporting a triple rear camera setup. Where the primary lens will be of 16MP resolution with rapid focus technology. There is a macro lens with a 2.5cm range shooting capability. Then, comes the depth sensor for portrait shots. The company hasn’t shared the resolution count for its macro and depth sensors. On the front, it has an 8MP selfie camera

All this is powered by a 5000mAh capacity battery. It claims to offer more than two day’s battery life. There’s no Rapid Charging support mentioned by the brand. It will be hosting a 3.5mm audio jack, USB Type-C port and weigh at 195 grams. The handset will be available in two colours including Royal Blue and Arctic Blue.

What do you guys think of the all-new Motorola Moto G8 Power Lite? Let us know in the comment section below.

Subscribe to our Telegram Channel for latest updates here: https://t.me/themrphone