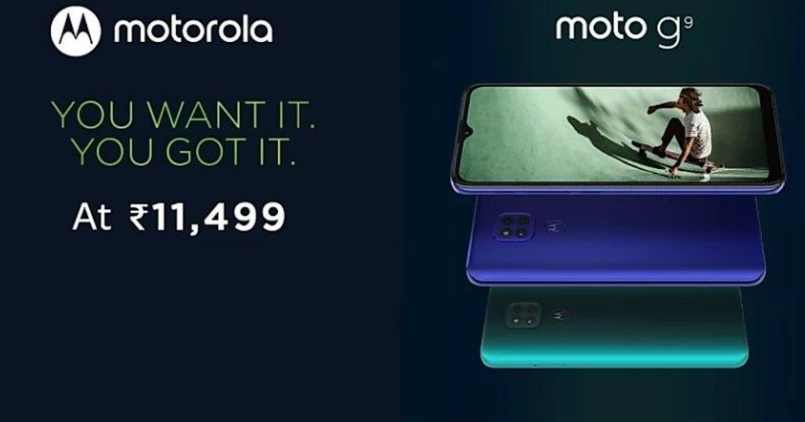 Motorola was in talks to launch a new device in India, with some YouTubers and influencers hinting towards a new device from Moto with Stock Android (a staple of Motorola). Today, Flipkart made a mistake by listing the upcoming Motorola device, which is the Moto G9. The specifications of the same have also been revealed. Let us discuss the same in brief.

The Motorola G9 will supposedly feature a 6.5-inch HD+ panel with a water-drop notch on top. There is somewhat of a thick bottom bezel below, which is somewhat common for budget devices. As for the performance, the device comes equipped with the Snapdragon 662 processor with 64 GB of Internal Storage. The device will run on Android 10 and the UI will be stock android.

In terms of the optics, the device will come with 48-megapixel triple camera setup. There is also a water repellent design with two variants being revealed in the poster, which are the green and purple hue. As for the battery, the device features a massive 5000 mAh battery which, with the HD+ display will be able to provide good battery life.

The Moto G9 pricing and availability were also leaked in the poster which was accidentally showcased on Flipkart. The pricing has been set at INR 11,499 for the 64GB variant. As for availability, the device will supposedly go on sale from 31st of August, from 12 PM. It will most probably be limited only to Flipkart.

What are your thoughts on the specifications? These are supposed to be accurate as they are the official posters for the device. Would you consider buying it in comparison to the Narzo 10 or the Redmi Note 9? Let us know in the comments below.