Home | Tech News  | Motorola One Vision First Impressions: it could very well be the one

Motorola One Vision First Impressions: it could very well be the one 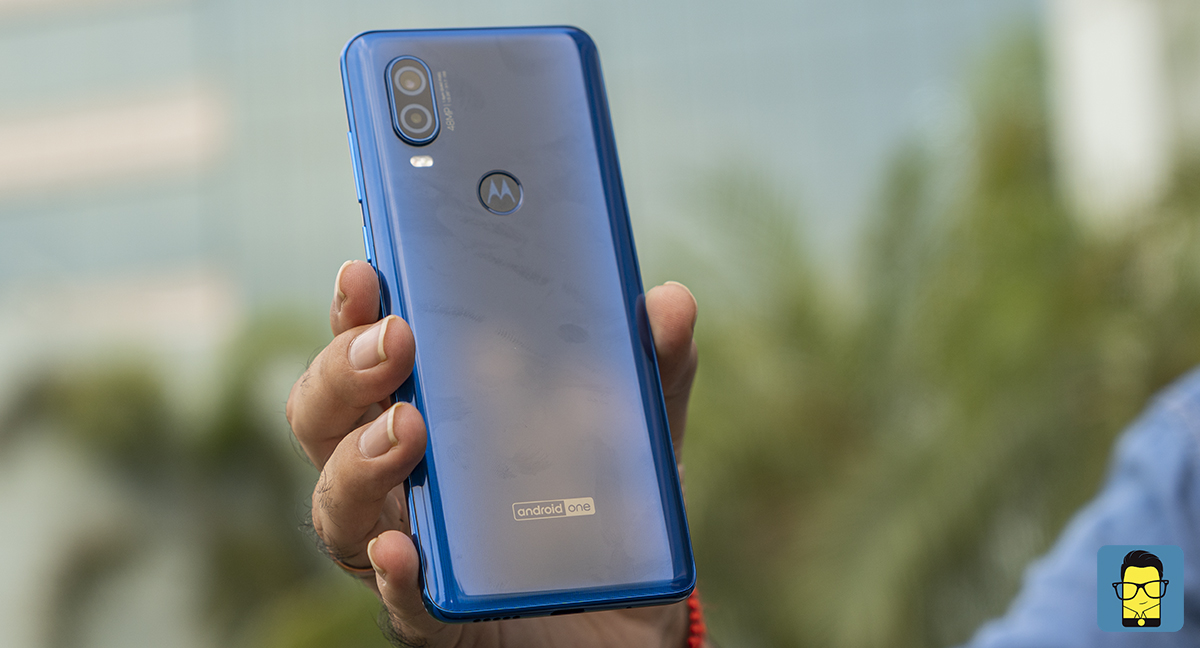 After two years of unexciting phone launches, the Motorola we know is back with a new device and this time it’s a lot more than just exciting.  The Motorola One Vision sports a punch-hole display, a 21:9 aspect ratio, and an almost no compromise package and here’s what I think about it after a few initial days of playing with it.

The Motorola One Vision brings back the glass design, that Motorola adopted not too long ago. The back glass is curved into the frame and the flat front glass is also accented by a 2.5D curved all around it. The back glass also boasts a gradient but I’m glad that it’s two different shades of the same color rather than two different colors. Also for the people who like tall phones, this is as good as it gets because the One vision comes with an aspect ratio of 21:9. Now that tall a display added with top and bottom bezels makes for an even taller phone. 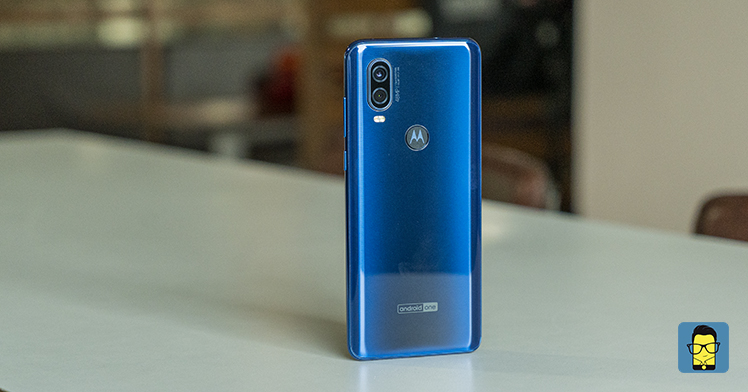 Honestly, I was very excited to test this new form factor out and in my few days what I noticed was that while the top areas were difficult to reach, everything else on the phone could be used single-handedly. This made for a very unique experience with the One vision. The ridged power button and volume rockers sit on the right side while the Hybrid Sim-slot sits on the left. Now, I don’t have anything against hybrid slots, but I distinctly remember Motorola talking about hybrid slots not being user-friendly. Well, it is an important part of the experience and the possibility of having to choose between a sim and a micro-SD card might be a deal breaker for many.

Something else that I really like is the physical fingerprint scanner embedded into the Motorola logo. Apart from this, you get a headphone jack on the top and a very loud single speaker at the bottom.

Moving on to the most interesting part of the Motorola One vision, is the 21:9 punch-hole display. The tall aspect ratio makes the One vision already one of the most unique looking devices in this price range or any price range for that matter. This makes the device rather manageable for the most part unless you interact with UI elements on top of the display. I’m telling you this setup would’ve been perfect with Samsung’s OneUI because considering that the entire UI has been designed specifically with tall phones in mind. The 21:9 display means that you can watch those cinemascope movies and trailers with zero black bars and it’s a unique experience to be able to do that on a smartphone. 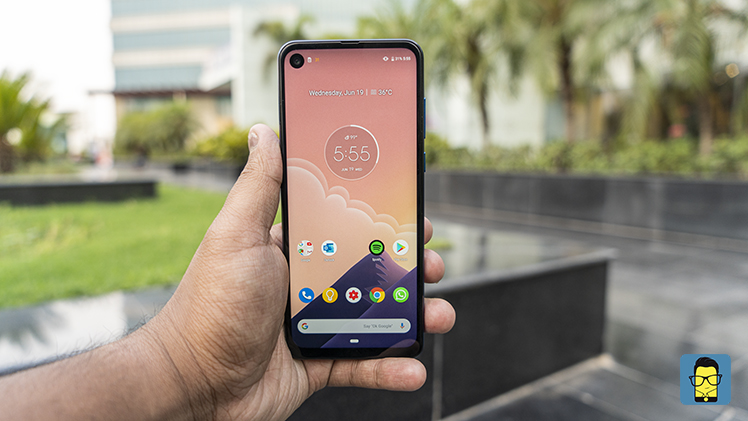 The second interesting thing about the One Vision’s display is the punch-hole camera. Well, we’ve started seeing punch-hole cameras in a few phones, and I actually prefer them over notches that sit in the middle, given that they have been optimized well and remain as small as possible.  With the Motorola One vision, the punch-hole’s border is slightly thicker than I’d like and that’s, in fact, the case with the entire display that is covered by this thicker than usual bezel all around. Now, the good thing here is that Motorola had a reason for it and that was to control the light bleed.

In the case of AMOLED displays, the individual pixels are their own light sources so there’s no chance of a backlight bleed. On the other hand with LCD displays you have a backlight which generally leads to light lead. To control this, Motorola made a few engineering changes by placing the light source at the bottom of the display and channeled the light to all areas of the display to minimize light bleed as well as to spread the light evenly. 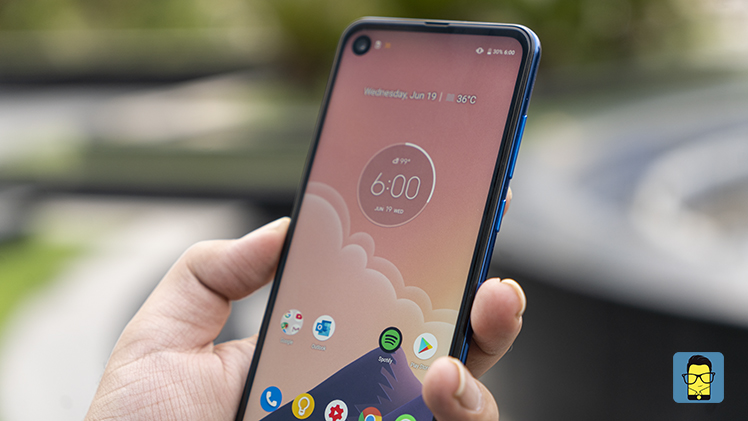 The display quality itself is also quite good, the brightness could’ve been a little better but for the most part, it is quite a unique display experience that you get here.

Motorola One Vision is an Android One device and that software is one with the phone. Stock android is a geek’s dream, because of how clean and smooth it is.  It’s a barebones OS with a few useful Moto tricks like the special gesture navigation, Moto actions, and an unchanged Moto ambient display. The device runs android 9 pie out of the box and will be among the first devices to be upgraded to Android Q. My experience with it has been quite clean and vanilla, just the way I like it. In the software section, there’s barely anything I don’t like. 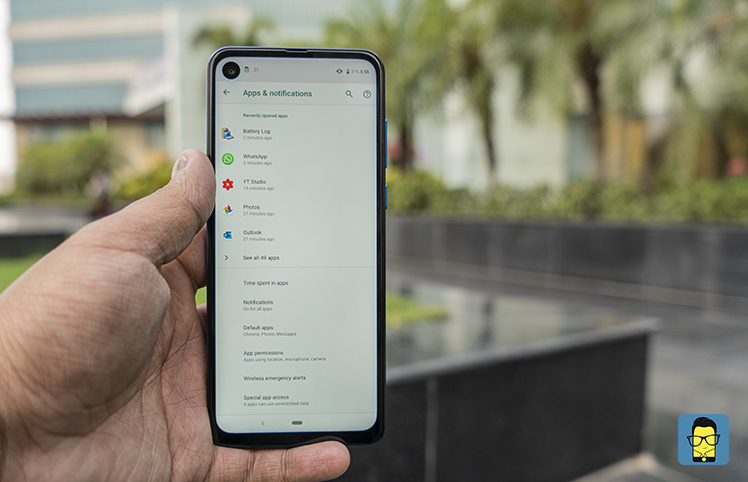 The performance duties are being taken care of by the Exynos 9609 chipset. Yeah, I know what you are thinking, a Samsung chip? Well, it’s not a surprise, because Motorola has partnered with Exynos in the past as well and this time you get a slightly tweaked Exynos 9610. The 9610 is the processor that powers the Samsung Galaxy A50 and the 9609 is the exact same processor save 100Hz on the clock speed. That makes literally zero difference, which makes me wonder if the tweak was done just so that a non-Samsung phone doesn’t compete with the exact same processor. 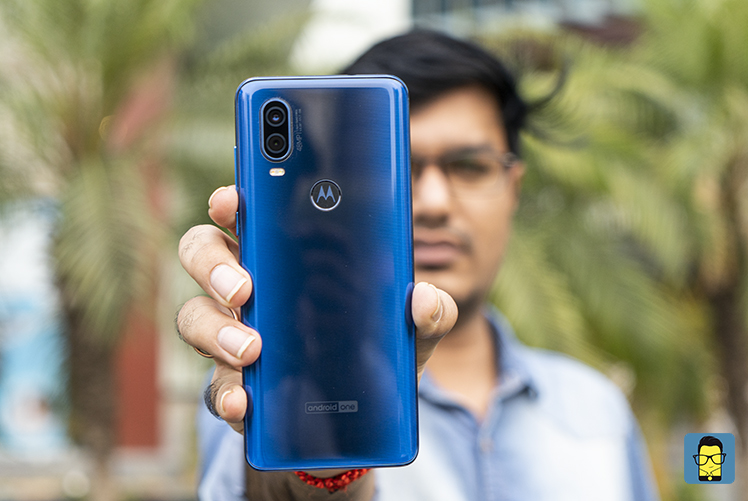 Coming to the real-world performance of the phone, I am having a lot of fun using it because of the snappy everyday performance. This is your Exynos 9609 on stock android, something you never thought you’d hear. Well, the performance is buttery and it is enhanced greatly by the rather quality haptic feedback engine fit inside the One vision. The haptic feedback engine happens to be an expensive part of the assembly and the fact that Motorola went that extra length is applause worthy.

We will be testing out the device in detail for the full review, so stay tuned if you want to catch that as well. That said, for my initial impressions, the performance of the Motorola One vision is something you wouldn’t need to worry at all.

The One Vision has a 25MP selfie camera placed carefully inside a machine cut hole inside the display. The back camera housing boasts a 48MP Samsung GM1 sensor and a secondary 5MP sensor for depth sensing. Motorola has always been better at final produce compared to what you see in the viewfinder. For the longest time, Moto phones have had average viewfinders which mean that when you point the camera to your subject the image looks average but once you click it and go back to the gallery to check if you find yourself quite impressive images. 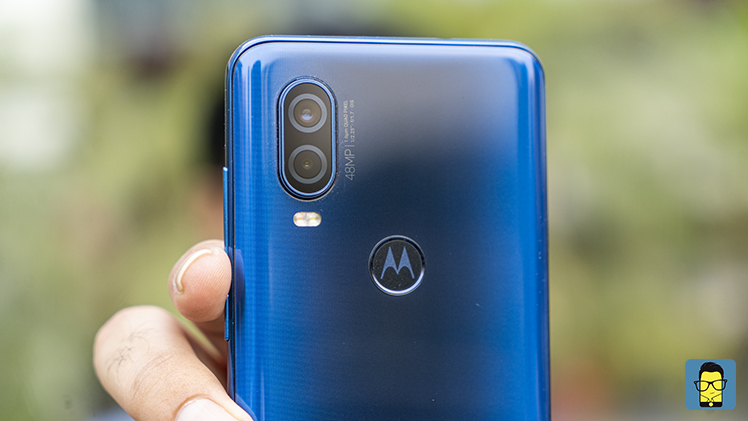 This time Motorola seems to have fixed that a little and even the shutter feels faster than previous phones in this price range. Here are few shots were taken using the Motorola One vision, since we will reserve our thoughts till the full review, we want you to take a look at these images for yourself.

Motorola has always kept battery performance at the core of their smartphones and I expected nothing less from the Motorola One Vision, but it seems like it doesn’t impress enough. The 3500mAh battery inside the One Vision seems slightly above average at best and the battery life I got out of it in the initial days haven’t been impressive either. I’ll, of course, be testing it out completely for the full review, but I think it’s safe to say that the battery could’ve been at least 4000mAh. That said, the charger that you get with the phone is the Motorola Turbocharger which is rated at 15W. Moto has been giving turbochargers even with budget phones for the longest time and I’m glad to see it making a comeback here.

The Motorola brand is among the very few companies that enjoy the kind of mind share they have among the Indian audience. That said, the past 2 years haven’t exactly been the best for the brand, but I truly think that it’s about to change by a lot. The Motorola One Vision is an almost perfect moto device, and at the price, it gives the other phones a tough competition. We will be going through each and every aspect of the phonon