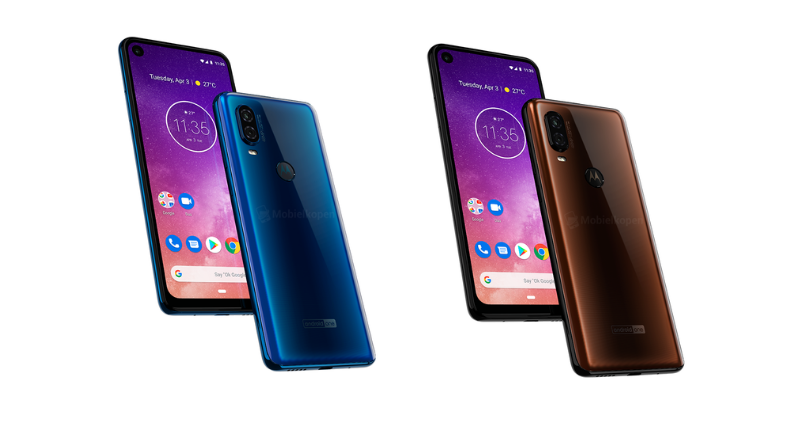 Motorola One Vision is all said to arrive on May 15 in Brazil, where the company has scheduled an event. The Lenovo-owned smartphone maker could be looking to take back its lost market in various countries including India with its Motorola Moto One series.

While we already have seen a set of CAD renders earlier, a fresh new set of the leak has arrived and seems they might be press renders. These days it is not unusual to see the press renders leaked online when the launch is nearby. Thanks to MobielKopen, a Russian technology website, we have got this renders. Let’s take a look at these renders and see what we ahem learned more.

Motorola One Vision: What’s new and what we know so far?

This Android One branded Motorola phone is said to arrive in two colours including Blue and Brown. The back panel seems to be made out of glass. Talking bout the rear, it is said to pack a dual camera setup on the top left corner placed vertically. There would be rear mounted fingerprint sensor with Moto’s branding embedded in the sensor. You can also see Android One branding.

Looking at the renders, it seems the phone shall be sporting slim bezels on the side, except the chin. It is said to feature a punch-hole display, where the hole would be on the left side, unlike Samsung Galaxy S10e, which has on the right side. Talking further about the display of Motorola One Vision, it is said to be of 6.2-inch and could offer a 21:9 aspect ratio, so believed. As far as the resolution is concerned, it could be sporting a full HD+ resolution display.

This Motorola One Vision is said to be powered by Samsung’s Exynos 9610 chipset. And supported by up to 4GB RAM. Expect the handset to hit the market with different storage options. It is expected to be released as Motorola P40, the successor to the P30 in China. While India may witness it has Moto One Vision only.