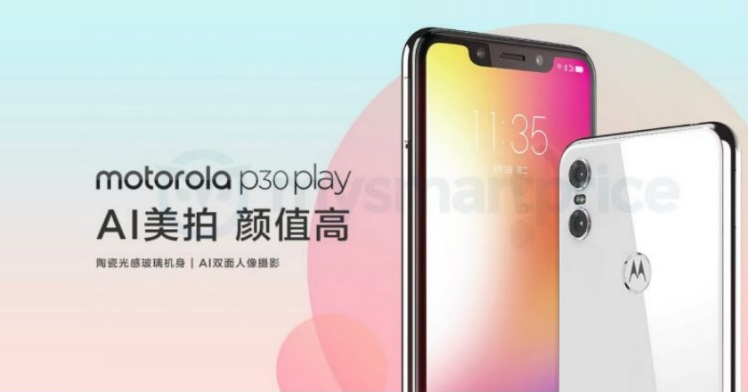 After launching the Motorola P30 and Motorola P30 Note in China recently, the company might launch another sibling in the P-series. The phone under scrutiny has been named as the Motorola P30 Play and has been found listed on the company’s website for a short period of time. The listing has revealed quite a few details about this upcoming smartphone along with its price.

As one can clearly see, the Motorola P30 Play will sport a notched display and a dual rear camera setup on the back. This third smartphone in the Motorola P series looks eerily similar to the other two phones when it comes to design. There are likely to be two colour options – Bright Black and Jade White.

Also read: Moto G6 Plus with Snapdragon 630 and dual-rear cameras coming to India on September 10

The official listing also revealed some crucial spec details of the upcoming Motorola P30 Play. It will sport a 5.88-inch display with a resolution of 720 x 1520p and an aspect ratio of 19:9. We can expect this phone to be a bezel-less beauty, as one can also see in the pictures. The device will derive its power from the respectable Qualcomm Snapdragon 625 processor coupled with a sufficient 4GB of RAM and 64GB of ROM. An adequate 3000mAh battery capacity will be present on the phone for consistent and long-lasting use.

Availability details are not yet available but we will keep you updated in case anything comes up. Stay tuned with Mr. Phone for more.