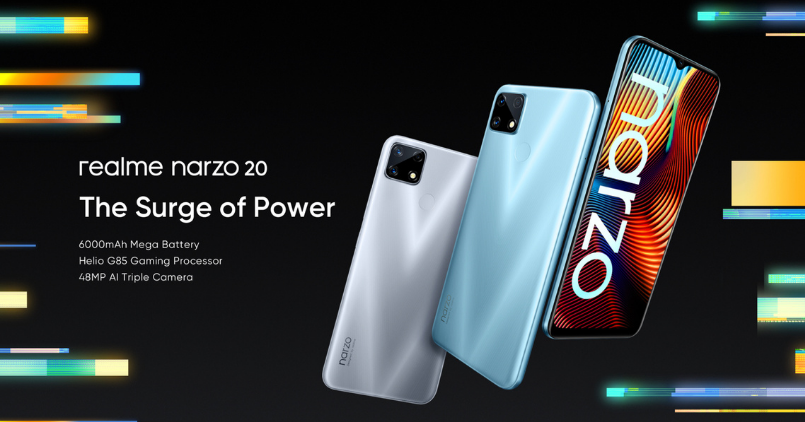 Realme has launched a range of smartphones in India today under its Narzo branding. The all-new Narzo 20, Narzo 20A, and Narzo 20 Pro are announced for the Indian market. The price starts at Rs 10,499, Rs 8,499, and Rs 14,999, respectively. Let’s talk about the specifications below of each device.

Sporting a 6.5-inch HD+ display with an 88.7% screen to body ratio. The phone weighs 208 g and has a 9.8mm thickness. It will be made available in two colours, Glory silver, and victory blue. The phone will be powered by a massive 6000mAh capacity battery with 18W fast charging support.

Equipped with Helio G85 SoC, it will be coming with two RAM and storage configurations, 4GB + 64GB, and 4GB + 128GB. Note that storage is expandable up to 256GB via microSD card slot. The phone will be running on realme UI based on Android 10.

Speaking about the camera, it comes with triple rear camera support, where the primary lens is of 48MP resolution. The setup further includes an 8MP wide-angle lens, 2MP macro lens. On the front, it has an 8MP selfie camera. Realme offers an instant fingerprint sensor for faster biometric unlocking.

Sporting a 6.5-inch display with HD+ resolution, the Narzo 20A weighs at 195 g and has a thickness of 8.9mm. This phone comes in two colours, glory silver and victory blue. It is powered by a 5000mAh capacity battery. 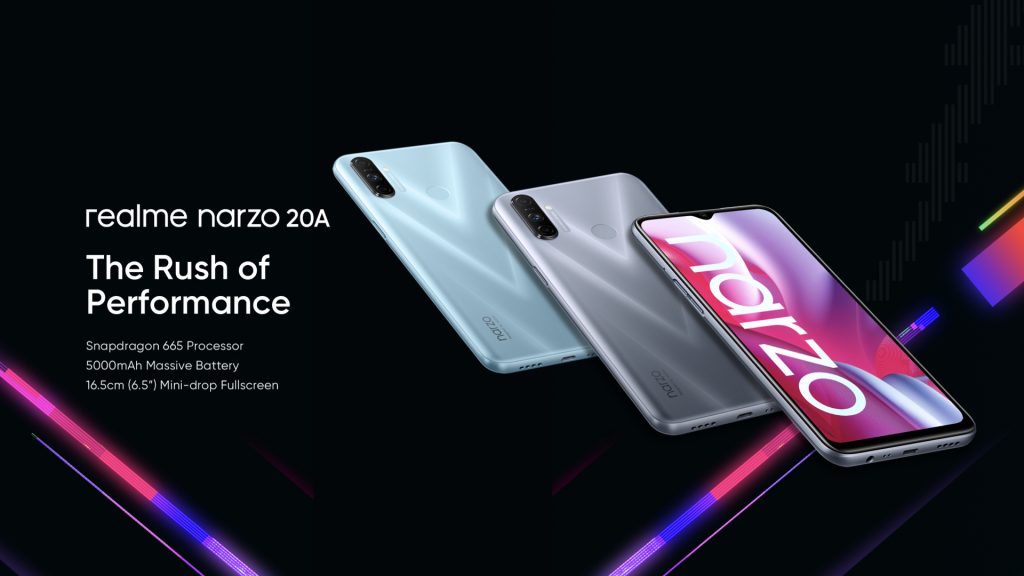 Equipped with a Qualcomm Snapdragon 665 SoC based on the 11nm process, it clocks at 2.0 GHz. The phone comes in two storage configurations, 3GB + 32GB and 4GB + 64GB, where storage can be expandable via a microSD card slot.

On the camera front, it has a triple rear camera setup, where the primary lens is a 12MP sensor, 2MP B&W lens, and a 2MP retro lens. On the front, it has an 8MP selfie camera. It will be running on the Android 10 based realme UI.

Pricing off Narzo 20A

Equipped with a 65W fast charging technology, this phone can get charged up to 100% in just 38 minutes as per the brand. It is powered by a 4500mAh capacity battery with a USB Type-C port. This will be the first handset in the Narzo series to come with SuperDart Charge technology. 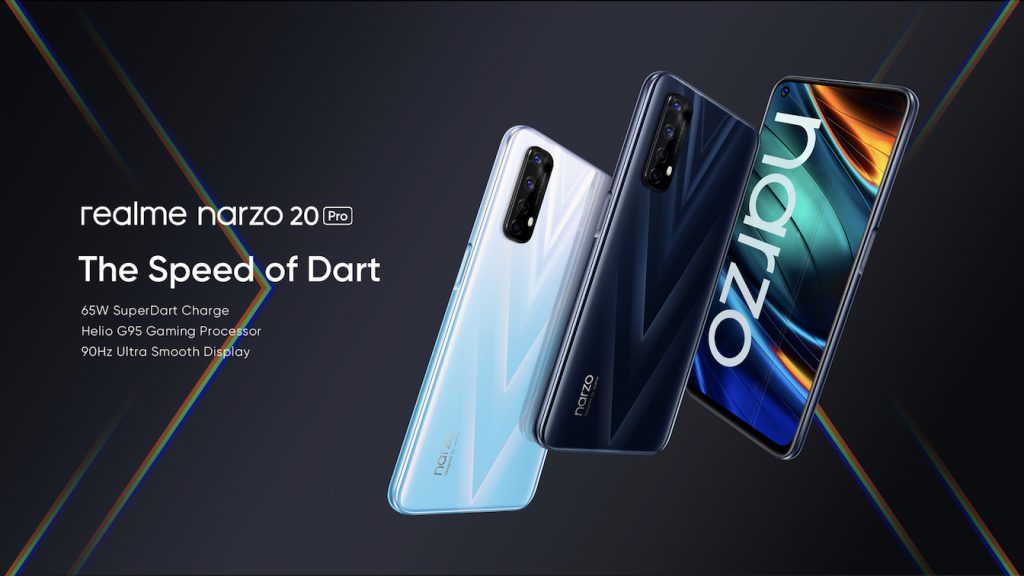 Sporting a 6.5-inch display with 90Hz refresh rate, it comes with an FHD+ resolution and screen to body ratio of 90.5%. It weighs at 191 g and has a thickness of 9.4mm. The phone is powered by a MediaTek Helio G95 SoC with Octa cores and up to 2.05 GHz clock speed. The configuration goes up to 8GB and 128GB.

The camera department packs a quadruple setup on the rear, where the primary lens is of 48MP with an f/1.8 aperture lens. There is an 8MP wide sensor, 2MP portrait lens, and a 2MP macro lens. On the front you see a 16MP primary lens with f/2.1 aperture, it’s a Sony IMX471 sensor.