Nokia 2.3 budget Android One smartphone set to arrive in India 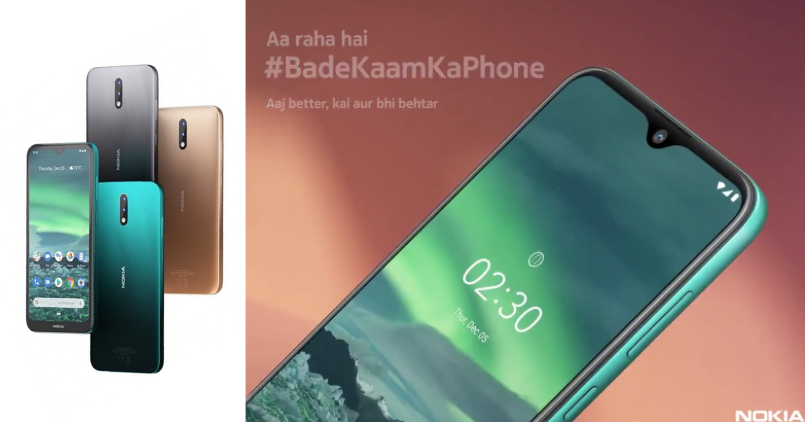 Nokia is all set to bring its latest Android One smartphone to India, the Nokia 2.3. After announcing the Android 10 upgrade for its Nokia 7.2, the Finnish handset maker is gearing up for yet another launch in the country. Thanks to the courtesy of Twitter, we now know that this handset is coming to India. Let’s talk about what to expect in terms of the feature and pricing.

Nokia 2.3 Features & Specifications – What to expect?

Sporting 6.2-inch HD+ display with dewdrop style notch, this phone will be coming with a beautiful ale gent design as seen on the image/video posted. There will be a dedicated button to launch Google Assistant, on the left side.

As far as the hardware specs are concerned, it will be powered by Helio A22 SoC. This chipset is supported by a 2GB of RAM and 32GB of internal storage. The storage can be expanded via a microSD card slot up to 400GB.

Sporting a dual rear camera setup, it will feature a 13MP + 2MP camera setup, where 13MP will be a primary sensor, while the 2MP will be a depth sensor. On its tweet, Nokia shares that its new phone will be there for you to capture those timeless memories.

The brand has started to promote Nokia 2.3 with a hashtag,“Bade Kaam Ka Phone”, which roughly translates to “A mighty useful phone”.  We don’t know about the usage, but it sure looks mighty on the outside.

Speaking about the battery life, it is said to have 4000mAh capacity battery. This shall offer you a long-lasting battery, as per the brand’s second tweet. Where it touts the battery life of its upcoming smartphone.

Coming to the price talk, the budget smartphone is all set to be priced below Rs 10,000. The expected price of the Nokia 2.3 in India is Rs 8,499. Looking at the current competition, I’d say Nokia needs to go aggressive with its pricing right now. What do you guys think of the Nokia 2.3? Let us know in the comment section below.