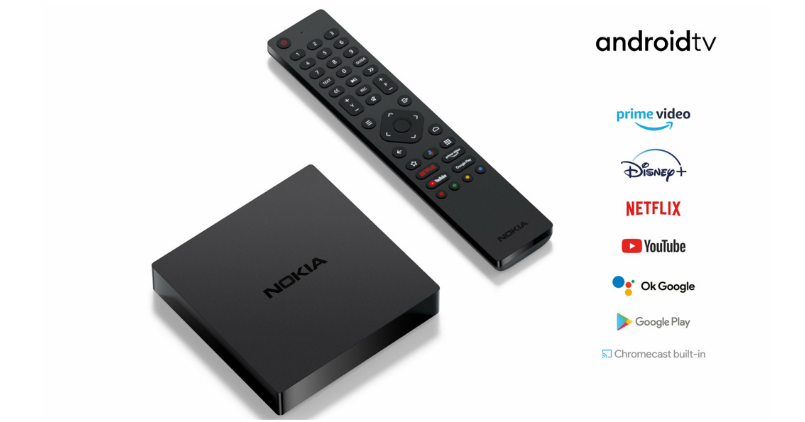 Nokia Streaming Box 8000 has launched in the European market. It can stream 4K UHD playback and supports Android TV as well. With ‘Streamview’ as being the new licensee for the Nokia brand for its Smart TVs, Set-top-boxes and DAB+ radios, the smartphone maker has announced this new streaming box.

The Streamview head-quartered in Austria and handles the aforementioned Nokia products in the regions, including Europe, the Middle East and Africa. For those who are wondering about HMD Global, it handles Nokia’s smartphones globally.

Nokia Streaming Box 8000 streaming device happens to be a new addition to the company, apart from its wide range of smartphones. Since its an Android TV, it comes with Google Play Store and Chromecast built-in just like any other Android TV out there. Users can install a wide range of streaming platforms and OTT services like Netflix, and Disney+, for instance.

As for the design, Nokia Streaming Box 8000 is a fairly square looking box, with Nokia branding on it. At least, that’s what the official renders suggest. However, the interesting part of the streaming box is it’s remote. Firstly, it’s a backlit key remote, meaning you can operate effortlessly while watching a movie or a show, especially in the darkly lit conditions.

The remote looks traditional and features dedicated buttons to launch YouTube, Google Play and streaming services like Netflix and Amazon Prime Video as well. The remote also features additional shortcuts, which might or might not be programmed, it’s very unclear at this moment.

The Nokia Streaming Box 8000 ships with Android 10 out-of-the-box. It can stream 4K; however, there aren’t many details on whether it supports HDR 10 or Dolby Vision, for that matter. It reportedly features a quad-core processor, underneath. On the I/O front, the streaming box has a wide range of ports including — HDMI port, Ethernet, USB Type – A, USB Type-C, optical audio and DC input. The other connectivity options include Wi-Fi 5 and Bluetooth 4.2.

As stated earlier, the device is available in the European market, starting at €100 (Rs 8,800 approximately. To recall, Nokia has also partnered with Flipkart earlier in the country. The duo had launched a streaming device named ‘Nokia Media Streamer’ for Rs 3,499 (launch price). It currently retails at Rs 2,799 only. It runs on Android 9 and also has a remote with dedicated Netflix and Zee5 buttons. However, it only supports streaming in Full-HD.