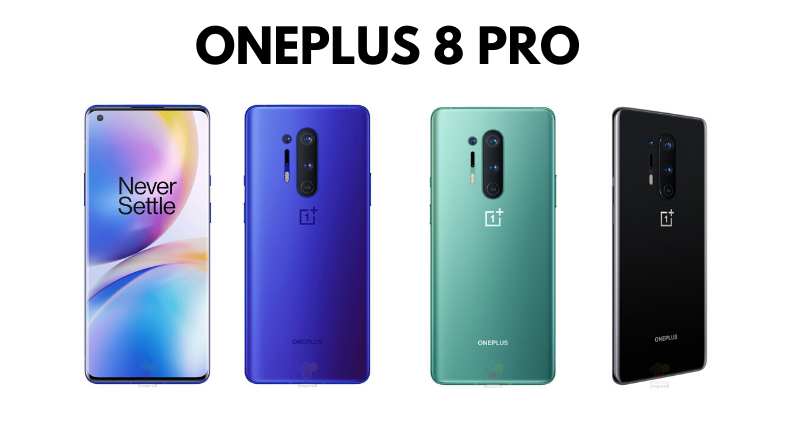 OnePlus just can’t catch a break, can they! While earlier this week, we learned about an extension leak of OnePlus 8 official renders. Today, we have come across the purported official press renders of the upcoming OnePlus 8 Pro. The folks at WinFuture are hell-bent on bringing all about the latest information about upcoming OnePlus phones. This is kind of good news for people who are looking forward to the OnePlus 8 Series. If you’re one of them stick around to learn more about them below.

OnePlus 8 Pro – Press renders are out

There will be three colours of OnePlus 8 Pro unless OnePlus decides otherwise. The purported official renders gives us a detailed look at these three colours. First, let’s talk about colours. We will be seeing the 8 Pro in Onyx Black, and Glacial Green, which you guys are familiar with, as seen on the OnePlus 8. Now, this third colour is again very distinctive choice if I may say.

This third colour will be called Ultramarine Blue, with a hint of purple in there, you can see this pops-out really well among other colourful siblings. At this point, we don’t know if the colour choices will be restricted to certain configurations. If and when that happens, we could see ultramarine blue going for upper configurations only. Well, it’s just a guess, tell us about yours.

Now moving on to the OnePlus 8 Pro specs details, let’s talk about it below.

Starting with the display, it will be sporting a 120Hz refresh rate enabled QHD+ resolution display. The edges seem to be arched backwards, this could make the device easier to hold. The panel is said to offer HDR10+ support with permanently activated 10-bit HDR. There could a maximum brightness level of up to 1300 nits. You’ll see a cut-out in the upper left corner of the display.

In terms of the camera department, you’d see a quadruple rear cameras setup. Where there will be two 48MP modules, both Sony sensors. One would likely to be IMX689 and other IMX586, these two would do most of the jobs. But when there’s a requirement of zooming, expect an 8MP lens to step forward. Further, there could be a 5MP sensor employed for recording additional colour data.

You can read further about the OnePlus 8 Series hardware.