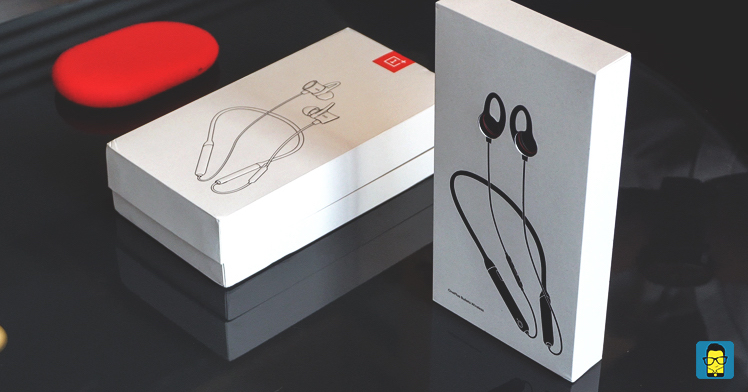 If there’s one category of gadgets that has exploded in the recent past, it has to be the neckband-style Bluetooth buds under Rs 5,000. One search on Amazon will reveal brands like Tagg, Mivi, Boult Audio, and more, selling wireless earphones by the dozen. Obviously, more established brands like 1More, Skullcandy, and Jabra also provide a few options in this price range.

But let me tell you this: most of these sound like a bunch steel knives rubbing against each other. Of course, there are exceptions like the SoundMagic E10 BT, 1More iBfree, and the Beyerdynamic Byron BT, but these are far and few in between.

And that is why, when OnePlus announced the Bullets Wireless at the global launch of the OnePlus 6 (review), my ears naturally perked up. Why? Because the original OnePlus Bullets wired earphones sounded damn good for its price.

So, how does the Bullets Wireless stack up? To cut the long story short, it punches above its weight. 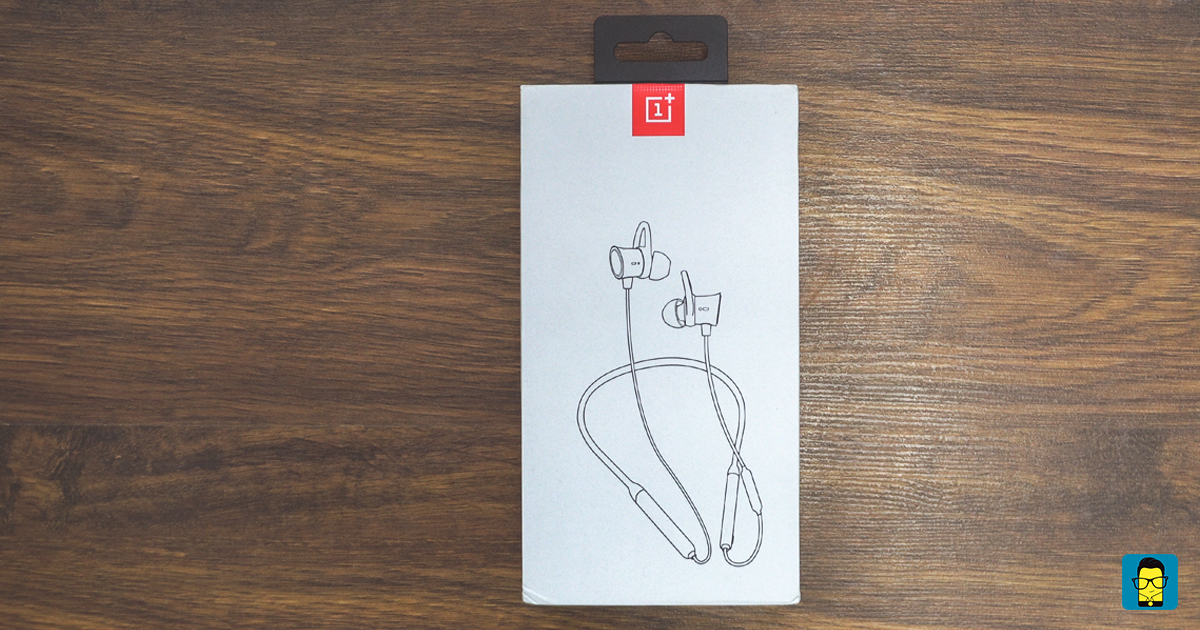 Inside the neatly designed box, you will find a signature red rubber carry case with a magnetic lock. The magnetic case houses the tiny red USB Type-C cable, with support for Dash charging. Apart from this, you will find the Bullets Wireless inside the box with a pre-attached pair of earplugs and fins for added support. These are the medium sized tips and fins. If, by any chance, you aren’t comfortable with this size, you also get a small and a large size tip/fin inside. Essentially, you should be able to find the right fit for you. 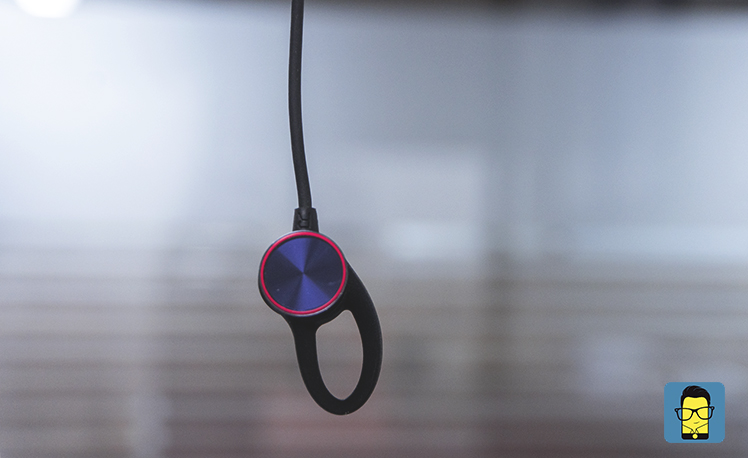 As for the earphones, the neck band and the wires are made of memory alloy covered in liquid silicone. Memory alloy is the same material used to make dental braces. The advantage of using memory alloy is that it “remembers” the original shape and is easily malleable. Therefore, even if you crumple up the Bullets Wireless to squeeze it into the rather cramped case, it goes back to its original shape the moment you take it out.

But, I am not a fan of the case. I don’t like the fact that it doesn’t have enough space for the earphones and bloats up the moment you insert it. This takes away from the neat design. What’s the point of good looks if it isn’t functional? 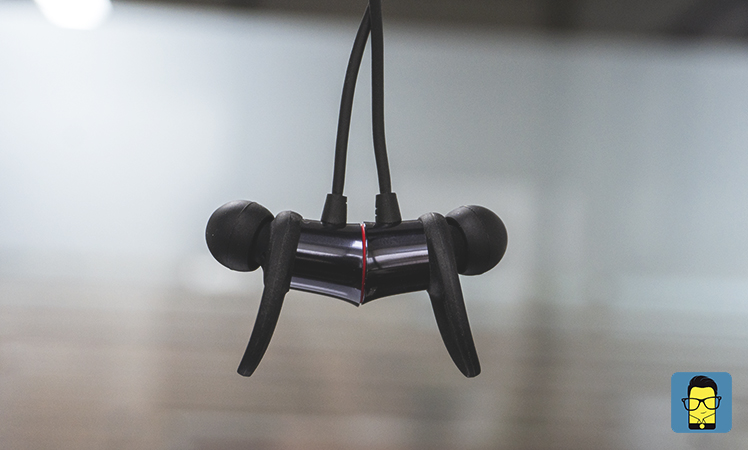 The 9.2mm drivers with “energy tubes” (marketing spiel, will discuss later) sits inside sturdy aluminium enclosures. These enclosures have red accents and look attractive too. But they are big and tend to jut out of the ears slightly. However, as far as comfort is concerned, you will have no problem wearing the Bullets Wireless for hours on end. Moreover, the weight is evenly distributed across the length of the earbuds, which ensures that it doesn’t weigh down on your ears. Also, the earphones have magnets and get attached to each other when you hang it down the neck. It makes it look like a necklace. An extra accessory, that fashionistas might abhor but tech lovers will find useful. 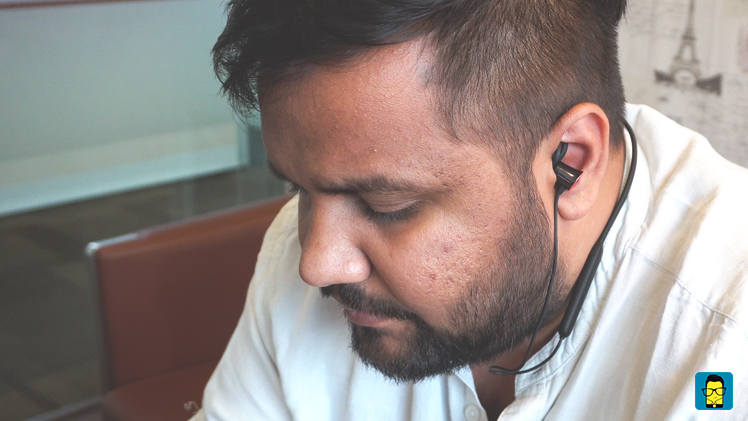 The left wire also houses the in-line remote control, which includes the Play/Pause button and the volume up/down keys. The tactile feedback is good enough for daily use. The one thing I love about OnePlus is attention to tiny details. For example, you can long press the volume up/down button to continuously turn up/reduce the volume. This is apart from the fact that you can do your regular single press to turn up the volume step by step. By the way, the power button – which can also be used for pairing – is present on the left side of the neck band. I’d have ideally traded the LED notification indicator for a soothing voice instead.

Talking about voice, the Bullets Wireless is the most affordable pair of audio equipment to come with support for Google Assistant. All you have to do is long press the Play button and Assistant will answer all your queries. Trust me, it is pretty damn handy. I feel more comfortable talking to the earbuds than my phone. 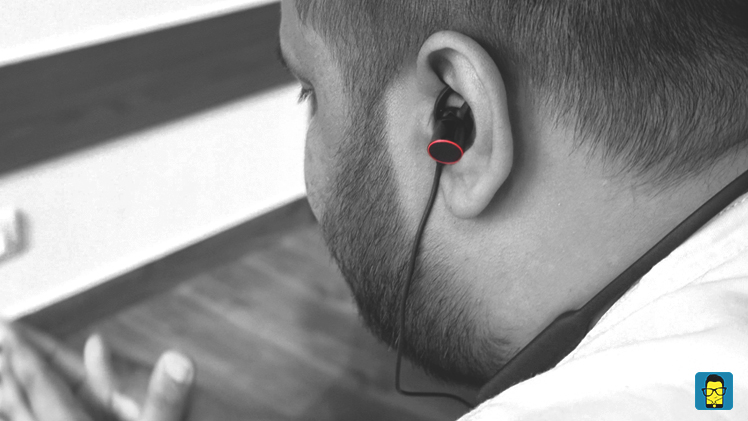 Coming back to those “energy tubes”, OnePlus claims this:“The energy tubes improve the audio experience by reducing the frequency diffraction and noise generation, resulting in a clearer and richer sound.” For the listener, only the words after the comma matter.

As far as connectivity is concerned, the Bullets Wireless connects over Bluetooth v4.1. And, it supports the aptX HD wireless technology as well. The connection is mostly rock steady and not once did it break during my extended listening sessions. Also when you pair the Bullets Wireless to the OnePlus 6, you will see a notification card pop up announcing the connection.

Furthermore, it seamlessly connects back to the phone, once paired. One party trick that OnePlus has borrowed from the Beats X Wireless is that it stops playing music when you attach the earphones together like a magnet. And, starts again when you put it back in your ears. Plenty useful, I must say. 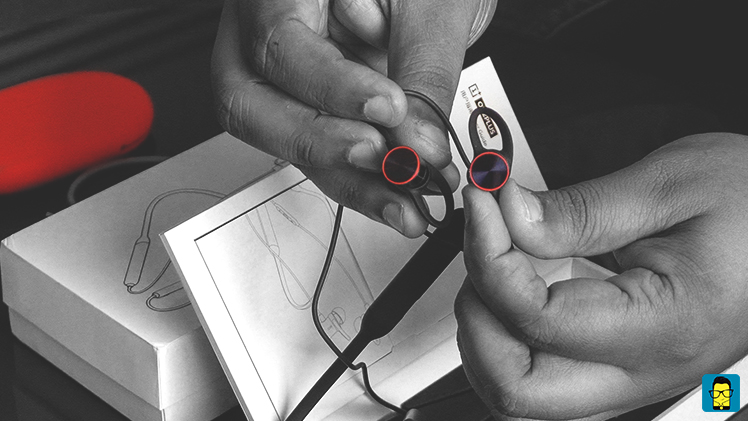 Note: for this review I used a OnePlus 6 and my personal Cayin N3 DAP to test these earphones out. In fact, the N3 natively supports aptX as well.  Additionally, I tested both FLAC files and 320kbps mp3s, but the Bullets Wireless’ sound signature wasn’t as resolved for me to identify the difference in fidelity.

Talking about the sound signature, the OnePlus Bullets Wireless has a predominately warm sound with very good imaging. The placement of instruments around your head is pretty good. Especially, for a pair of budget wireless earphones. And, that I believe it has something to do with those energy tubes. It is what non-audiophiles would refer to as crystal clear sound.

A song I frequently test to identify imaging is Arctic Monkeys’ excellent Do I Wanna Know? In the penultimate section of the song, when all the instruments – including the drums, bass drum, vocals, chorus, guitar, and electronically-created flanger sounds – come together, the Bullets Wireless does a good job of introducing each sound individually. But, the same song also clearly highlights one downside of the Bullets Wireless – the sub-bass feels bloated. It is not as tight as I would have liked it to be. 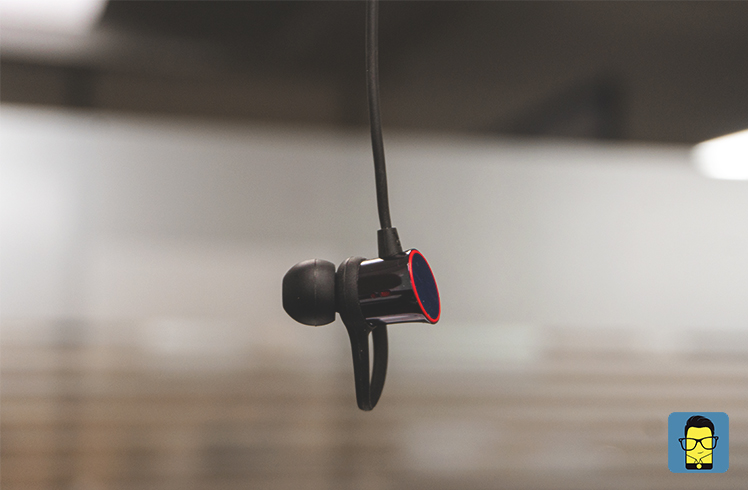 That said, the OnePlus 6 shines beautifully in the mids-section. An album I’ve been tripping on lately is the wonderfully rustic and folk-sound laden Angamaly Diaries. The song Theeyame is a simple composition with nothing but a few rustic percussions underlying the lead singer’s voice and the chorus. Here, the voice of the male singer just shines, and the drum beats manage to stay steady and tight too. Obviously, when you listen to this song on a pair of good wired earphones like the Soundsly Apaisant, you will hear a certain tonality and depth to instruments that is missing on the Bullets Wireless.

But, that is the nature of wireless sound compared to analogue. Can’t do much about it. As far as the treble response is concerned, the Bullets Wireless don’t do much apart from presenting the high end of the spectrum to your ears and ultimately rolling off when it hits the peak. I didn’t expect much either. 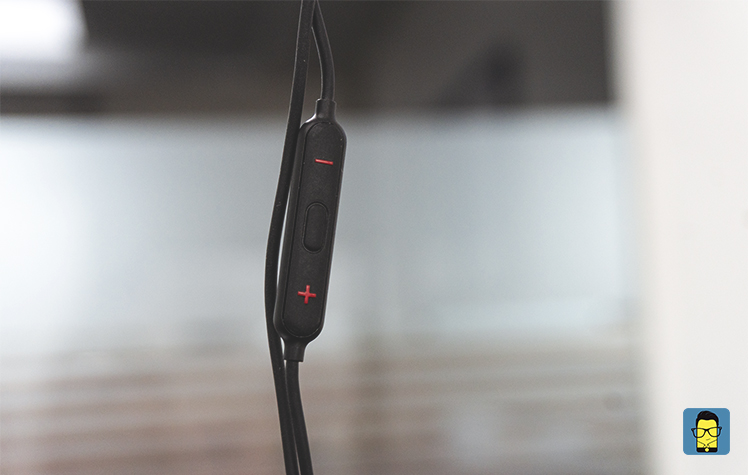 All in all, the Bullets Wireless has a sound that is pleasing to the ears and will definitely work for a lot of folks, if not the audiophiles.

Moving on, the battery inside the Bullets Wireless lasts around 6 hours and 30 minutes. That is, if you listen to music at 80 to 100 percent volume. This is lower than the company’s claim, which is around 8 hours. Well…you can achieve 8 hours of playback if you listen to music at 60 percent volume. Interestingly, OnePlus has introduced its famed dash charging to these earphones as well. And, dash charging on a small battery means you can eke out 5 hours off music playback from 10 minutes of charging. That’s crazy fast. In fact, it takes only around half an hour to charge the battery from 0 to 100. I am supremely impressed. 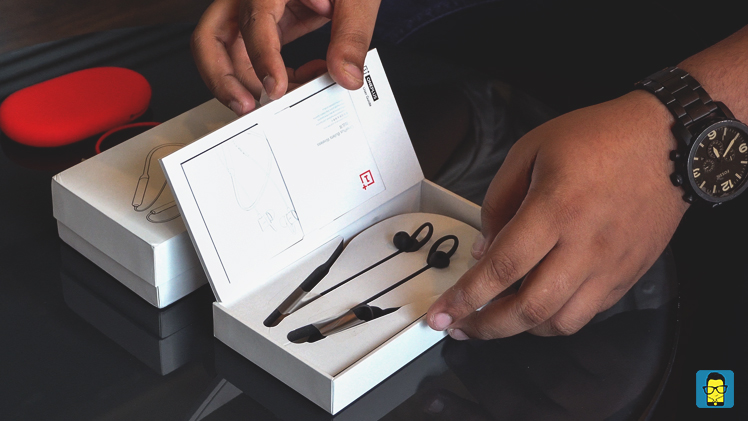 Oh, these earphones are also resistant to water splashes as well! I didn’t particularly test it out extensively but nothing happened when I sprinkled a little water on the Bullets Wireless.

Should you buy the OnePlus Bullets Wireless?

For its asking price of Rs 3,999, the OnePlus Bullets is an easy recommendation. You are bound to appreciate the sound signature and these are possibly the best sounding earphones in its price range. In fact, it definitely sounds way better than the Beats X Wireless and the Apple AirPods. Both of which are at least three times more expensive.

Obviously, if you want a cleaner, more critical sound, you can look at options like the RHA MA750 – which I hailed as the best neckband-style earphones. And, the EOZ One, which offers more punch in the bass section. Or, you can buy a FiiO FH1/F9 Pro and pair it with FiiO’s proprietary BTR1 DAC for the ultimate bluetooth experience. However, you are looking at the added size and weight of the DAC itself. Which honestly, defeats the purpose of buying portable gear. Let’s not forget the added costs too. 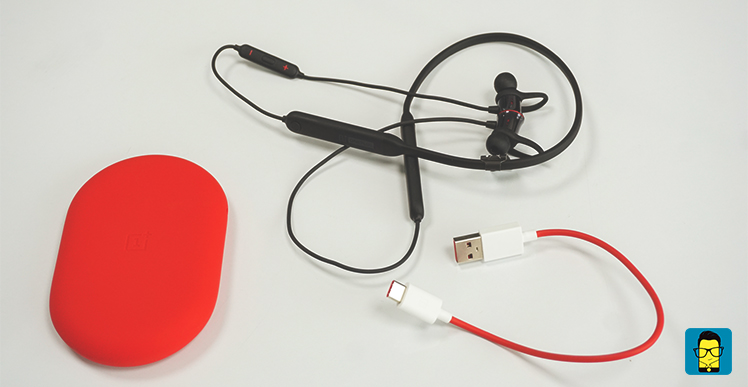 All in all, the Bullets Wireless offers a sound signature that is more consumer-friendly and comes with Google Assistant to boot. And, I strongly feel that OnePlus has once again nailed its whole philosophy of providing quality products at affordable prices with these earphones.

Next, I really want to see OnePlus create a pair of BT headphones with active NC for around Rs 10,000. Wouldn’t that be super cool?