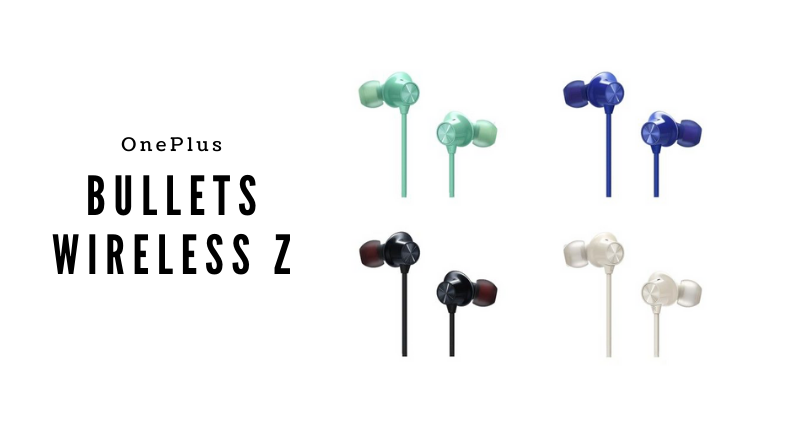 OnePlus is all set to launch its all-new flagship series on April 14 at 8 PM in India. While we are quite excited to see this first online-only smartphone launch from the house of OnePlus, we got more news on its Bullets Wireless Z product, which was leaked previously with no details. Today, thanks to Ishan Agarwal and Evan Blass for renders, we now have more details about this Bluetooth earphone.

The Bullets Wireless Z earphones are said to pack a range of existing features. Starting with its fast charging support. A 10 minutes charging is supposed to give you 10 hours battery life. That’s just nuts, isn’t it! This charging will be called Warp Charge after the technology used on its flagship phones. It is said to offer 20 hours of battery life on a full charge.

Coming to the design, Ishan quotes that it will have IP55 certification. This rating essentially means it’ll be protected against dust and can get behind jet sprayed water for up to 10 minutes. It is said to come in four colours as seen in the above-mentioned picture. The colours will include Green, Blue, Black, and White. It is expected to sport the neckband design as its predecessors OnePlus Bullets Wireless and Bullets Wireless 2.

The Bullets Wireless Z earphones will come with Bluetooth latency of 110ms. The latency means the delay between the audio signal being sent and received by you. For a perspective, the Apple AirPods Pro has a latency of 144ms, thus making at upcoming OnePlus earphones really good competitor. The new detail also debunks the belief that Wireless Z will be TWS earbuds.

For those who got excited about the OnePlus TWS earbuds arriving alongside OnePlus 8 series, I feel your disappointment. What do you guys think of the OnePlus Bullets Wireless Z pricing? Let us know in the comment section below.

Subscribe to our Telegram Channel for latest updates here: https://t.me/themrphone