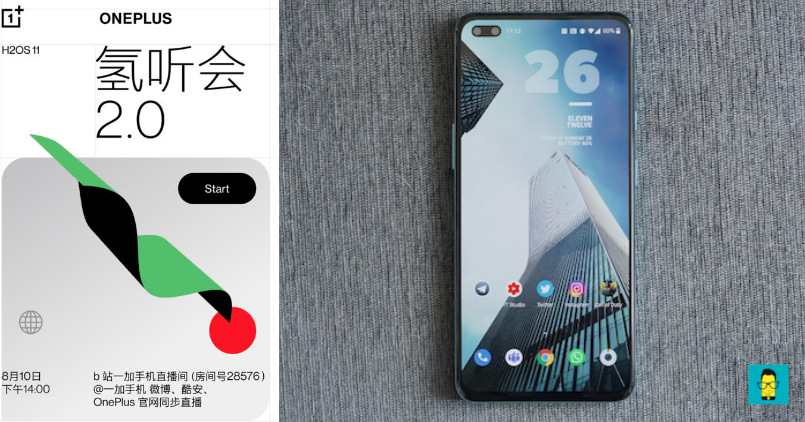 OnePlus has been a brand that has had a success story that many dreams of. The brand went from nothing to being amongst the top flagship brand in a matter of a few years, and, their main USP has always been and remained to be their software, Oxygen OS. It is known as Hydrogen OS in the Chinese market with fairly similar features.

A fan favourite, Oxygen OS/ Hydrogen OS offers a seamless experience with no ads and a lag-free UI. This when paired with OnePlus hardware creates a superb device. Now, Oxygen OS/ Hydrogen OS is scheduled for its next update, it’s 11th version. Hydrogen OS 11 will be launching at 2 PM on the 10th of August. What are the major new features that have been revealed? Let us discuss that in detail.

Some Changes With Hydrogen OS 11

There are two major changes that have been revealed or have been hinted at. The first one is a more visual UI with better animations, visual components and providing what the brand calls “brand-new interactive concept”. This will lead to a simpler way of reading or interpreting information with the help of the above-stated features.

Coming to the second feature, it is one thing that many users have been wanting for a long time, it is the Always On Display feature. This feature has not been a part of OnePlus devices even though they have had AMOLED panels in some devices. A post by Pete Lau (OnePlus CEO) hinted towards this feature.

The new Hydrogen OS is launching on 10th of August at 2PM as mentioned above and, within a few months they will be able to incorporate Google services in their software and create Oxygen OS 11 just in time for the OnePlus 8T series.

What are your thoughts on the new update? Do you think it brings a lot to the table? Let us know in the comments below.