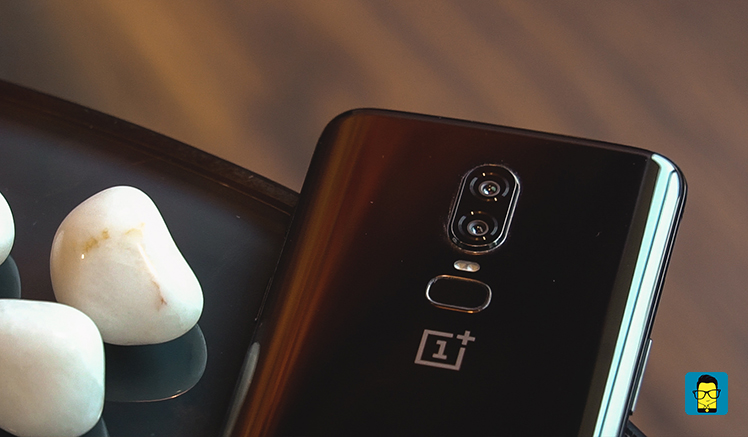 Apart from Google, only a handful of companies have been working well on software updates for their devices. Thankfully, OnePlus is one of those. The Chinese giant recently launches the OnePlus 6T, the successor to the OnePlus 6. Now, despite its flaws and its omissions, the device has been doing great in the market. However, OnePlus hasn’t forgotten about the OnePlus 6. After rolling out the latest stable build that brought Nightscape to the OP6, the company has now rolled out the new beta build, that brings forth OnePlus Roaming.

What is OnePlus Roaming?

Now, I know you must be wondering what OnePlus Roaming is all about, right? Well, think of OnePlus Roaming as a software-eSIM solution. The feature allows you to purchase data packs while roaming in certain countries, without even having a physical SIM card inside your device. 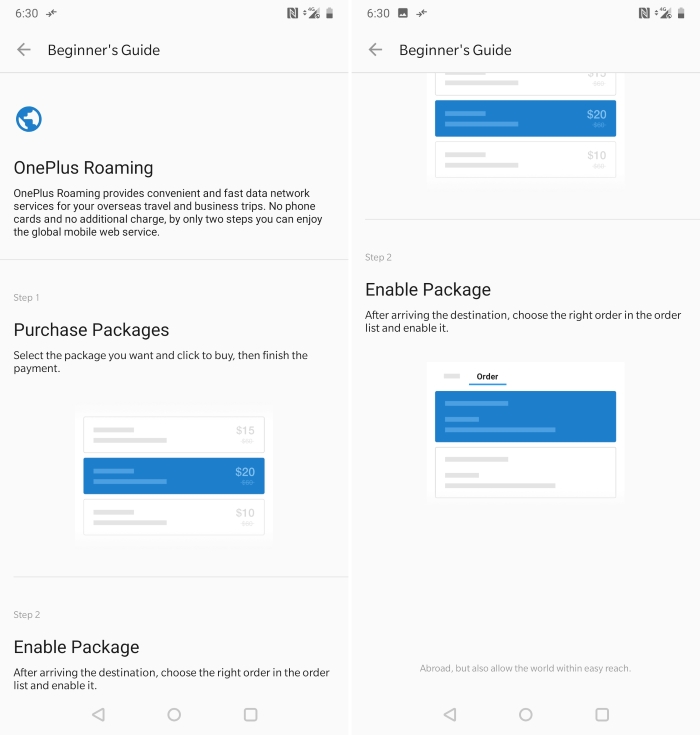 As OnePlus describes it, “OnePlus Roaming provides convenient and fast data network services for your overseas travel and business trips. No phone cards and no additional charge. By only two steps, you can enjoy the global mobile web service.”

OnePlus Roaming is said to be powered by RedTea Mobile. The feature makes use of SoftSIM technology, to emulate an eSIM on your device. Technicalities such as telecom providers, location, etc, are taken care of by the system itself. The user is only required to purchase specific plans to ensure his data validity.

How to use OnePlus Roaming

Note: Please backup all your data before proceeding. As of this writing, the feature is only available on the Open Beta channel of OxygenOS. Installing it will result in a complete data clear of your device.

To start off, you’ll have to install the latest OxygenOS Open Beta 7 on your OnePlus 6. You can download the file from this link. Once you’ve downloaded that, just head over to Settings -> System -> System updates. Now, tap on the gear icon in the top-right corner and tap on Local upgrade. Select the update package you downloaded earlier. The system will now install the latest Beta package and reboot your device. In case you weren’t already on the Beta channel, your data will be wiped clean.

Now, once you’re running OxygenOS Open Beta 7, the process in itself is quite simple, to be honest. To get started, head over to Settings -> Wi-Fi & internet -> OnePlus Roaming. Here, you’ll be greeted with a pop-up saying that no network has been purchased. 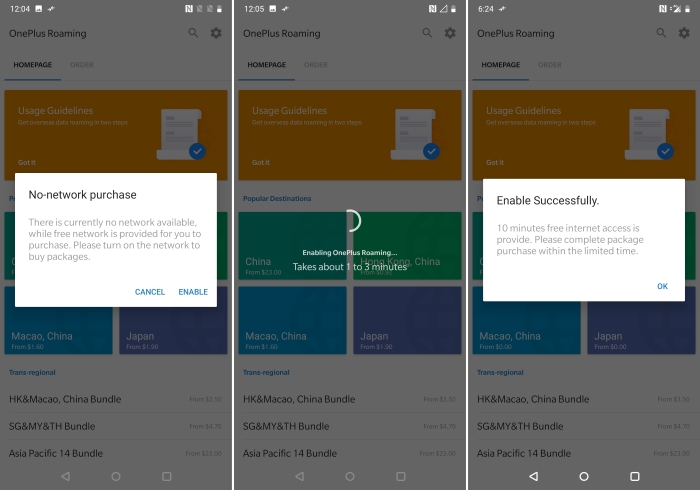 You can now tap on “Enable” to enable the trial period of OnePlus Roaming. Once done, the system will attempt to contact RedTead’s services to grant you a SoftSIM. Once done, you will get free 4G data for 10 minutes. 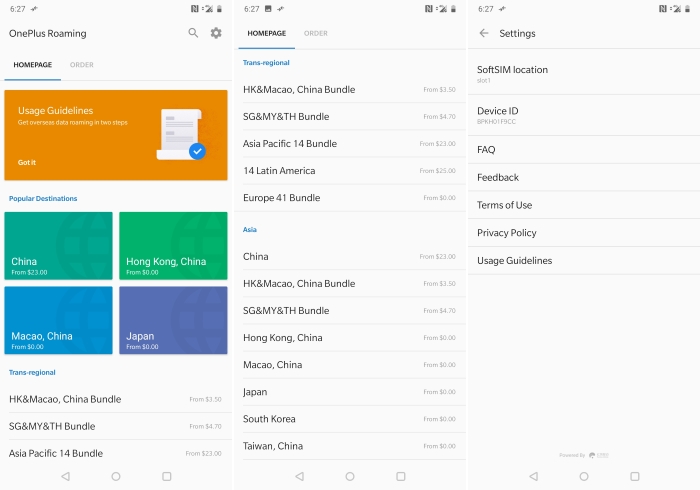 This trial time is given in order to let you go ahead and purchase a plan offered by OnePlus Roaming. Even in its starting stages, OnePlus Roaming offers plans across plenty of countries, including countries in Asia, Europe, Africa, Oceania, and the Americas.

Soon after OnePlus announced the OxygenOS Open Beta 7 for the OnePlus 6, I installed it on our OnePlus 6. Do note that it was a completely clean install, and during the testing process, there was no SIM card inserted into the device.

Following the process described above, I was able to enable OnePlus Roaming on my device. While I didn’t purchase a plan right away, the results in the trial period of 10 minutes were enough to make a solid judgment about the feature. Upon completing the process, the SoftSIM network granted to me was Jio 4G. On testing the speeds, the device easily managed to offer me download speeds of 350KB/s, peaking up to 401KB/s. 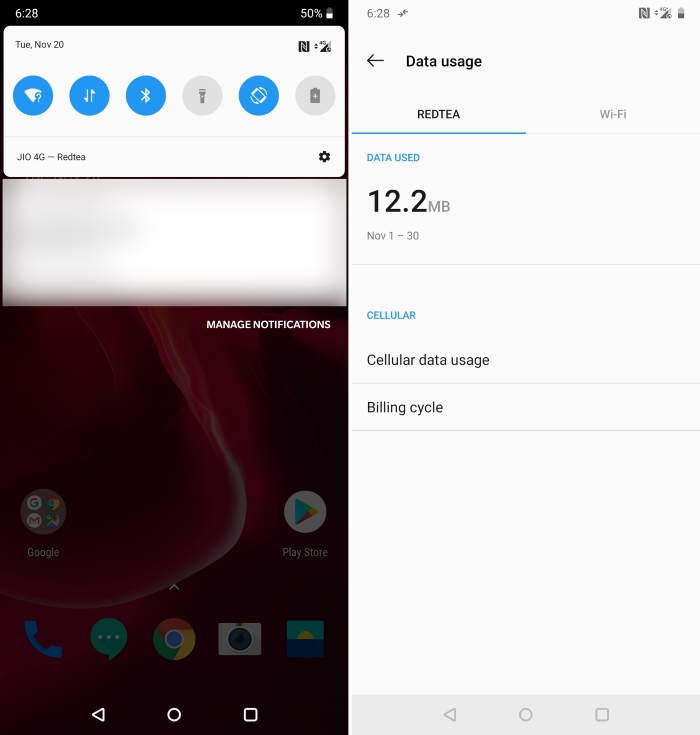 As for the prices itself, when you compare it with a physical SIM, you get to see the bigger picture. While one can use a physical SIM for calls as well, OnePlus Roaming provides only with data access. On the plus side though, the data plans are quite cheap. Moreover, purchasing a physical SIM card can be a tedious task. With OnePlus Roaming, it’s just an online purchase, with the product being delivered to you immediately. That being said, it does raise concerns over privacy and user authenticity. 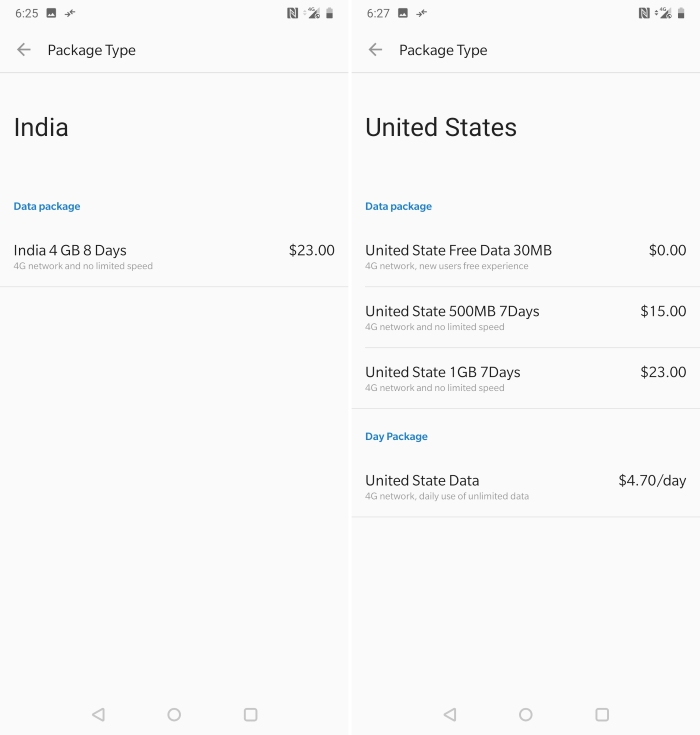 All in all, OnePlus Roaming is a great step forward and seems like a boon for foreign travelers. Surely not every person who travels a lot runs a Beta build on their device, but it shows us what OnePlus has planned for its devices.