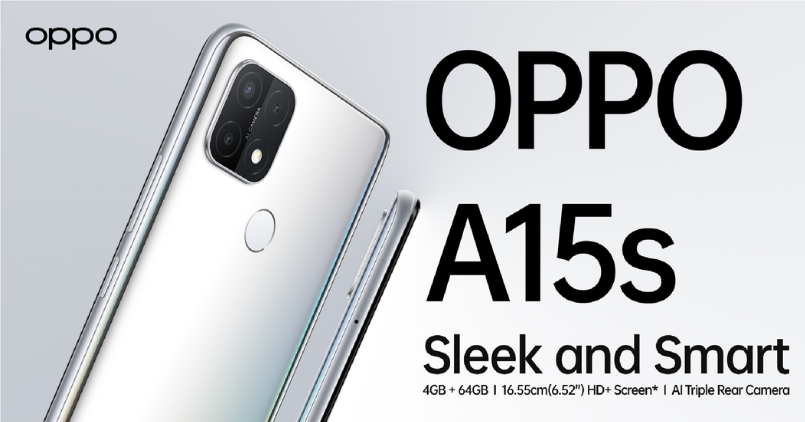 OPPO A15s is the new upgraded variant of the OPPO A15 smartphone, which launched early this year. According to OPPO, the new variant comprises a more significant storage option than the previous model and claims to offer a seamless user interface. It is priced at Rs 11,490 in the country and will be available for sale starting from December 21st. The device is said to be available across all retail stores alongside Amazon India. There are several bank offers, and EMI offers on the device, which consumers interested in buying can avail starting from December 21-25th.

The A15s features a 6.52-inches HD+ display similar to the earlier model. It retains the waterdrop notch display, which beholds the selfie shooter. The display attains the screen to body ratio of 89% and packs in a 3D curved body, which measures 7.9mm in thickness. There are three colour variants in which you can buy the OPPO A15s smartphone comprising — Dynamic Black, Fancy White and Rainbow silver.

The OPPO A15s, underneath, packs in a MediaTek Helio P35 chipset. It is an octa core processor with clock speeds of up to 2.3GHz. For graphics, the SoC comprises IMG PowerVR GE8320 GPU. While the previous model featured up to 3GB of RAM and 32GB of built-in storage, the OPPO A15s comes with 4GB of RAM and 64GB of onboard storage. The OPPO A15s also ships with Android 10-based ColorOS 7.2 out of the box, on the software front.

There’s an AI triple rear camera setup on the back of the OPPO A15s. The 13MP sensor acts as the primary sensor, followed by a 2MP macro sensor and a 2MP depth sensor. They come with features comprising night mode, time-lapse mode, slow-motion, to name a few. The dewdrop notch upfront carries an 8MP selfie shooter, which also comes with AI beautification mode.

Lastly, the other highlights of the device include — VoLTE, dual-band Wi-Fi, Bluetooth 5.0, GPS, and USB 2.0.