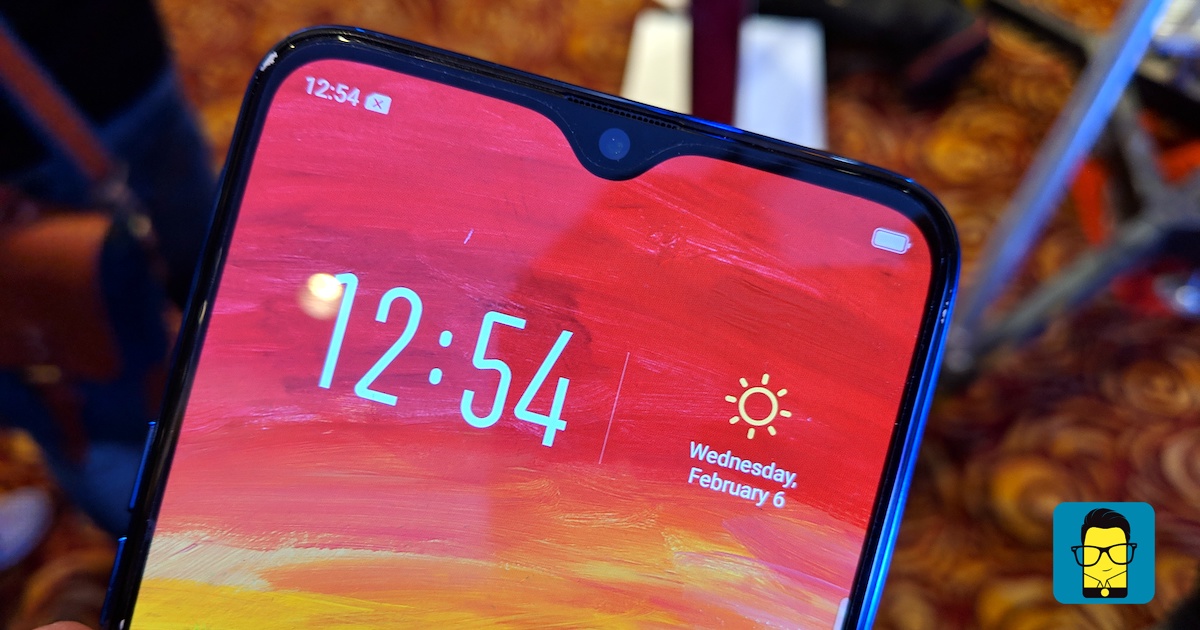 OPPO’s first outing in 2019 is with a new series – the K series. The newly launched OPPO K1 is a phone that is touted as the most affordable phone with an in-display fingerprint scanner.  And, it is in India. But, is that all there is to the phone?

Well, yours truly spent some time with the phone at the launch event. And, here are my first impressions of the same. 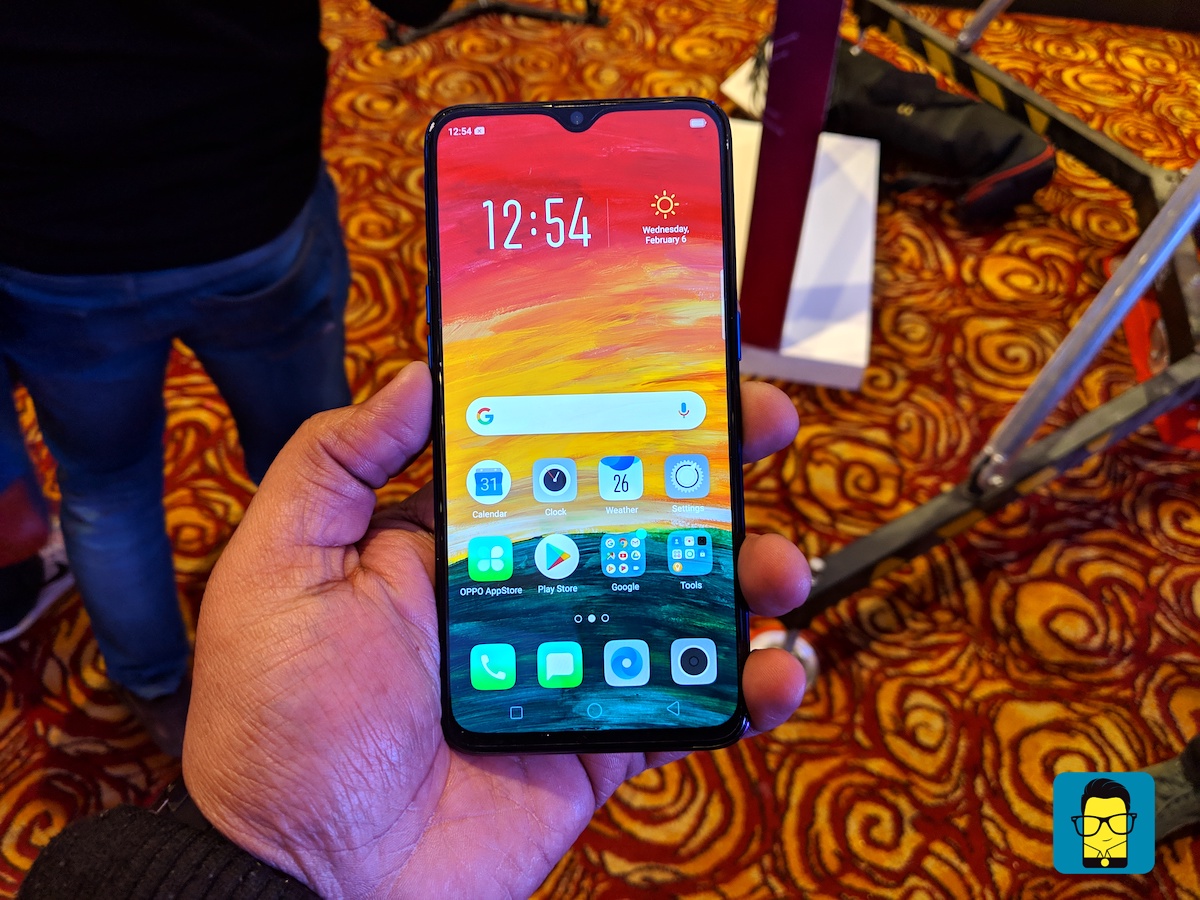 The first thing I noticed when I held the OPPO K1 in my hands is that it is light and slim. Not many phones in this price range are 7.4mm thin now. And couple that with the 156g weight of the phone, you have one of the thinnest phones under Rs 20,000.

The K1 comes in two colour options: Piano Black and Astral Blue. The Astral Blue colour of the phone is a very heavy gradient that gradually moves from blue to violet. It does look pretty flashy. But note this, the K1 is made of plastic and not glass. 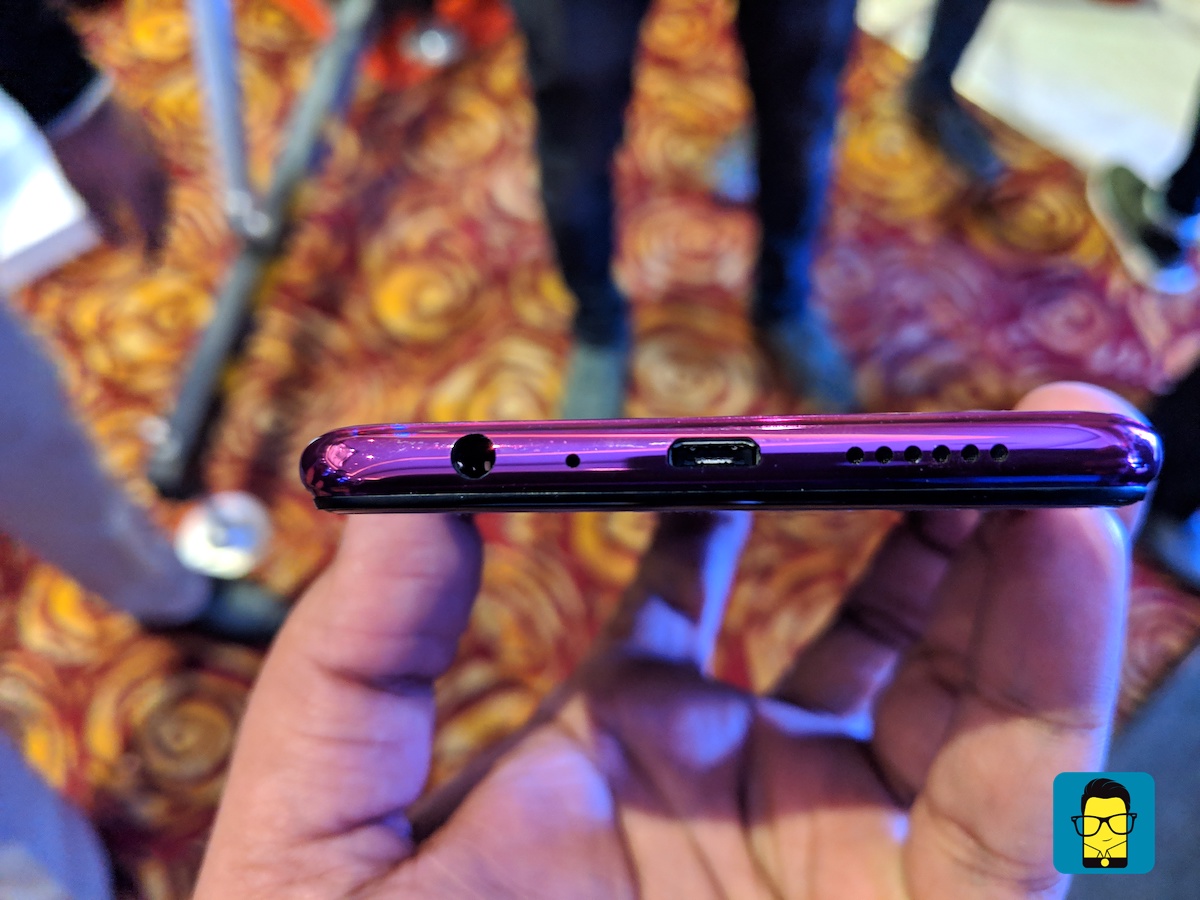 Honestly, though the K1’s front is where all the action is at. Firstly you get a large 6.41-inch FHD+ AMOLED display. Yup, you read that right – it is an AMOLED display. And, OPPO has used an AMOLED panel because you cannot install in-display fingerprint scanner on an LCD screen yet. And secondly, there is a tiny dewdrop notch that incorporates the 25MP selfie camera. I had very little time with the phone at the cramped hands-on area at the launch and therefore I couldn’t really test the display. However, I found the display fairly bright and crisp.

The power button is on the right edge, and the volume rocker and on the left edge. At the bottom, you get a Micro-USB port, which is my biggest issue with the phone. Type-C has to become a standard; it is 2019 for god’s sake. The single downward-firing speaker also sits at the bottom, by the way. 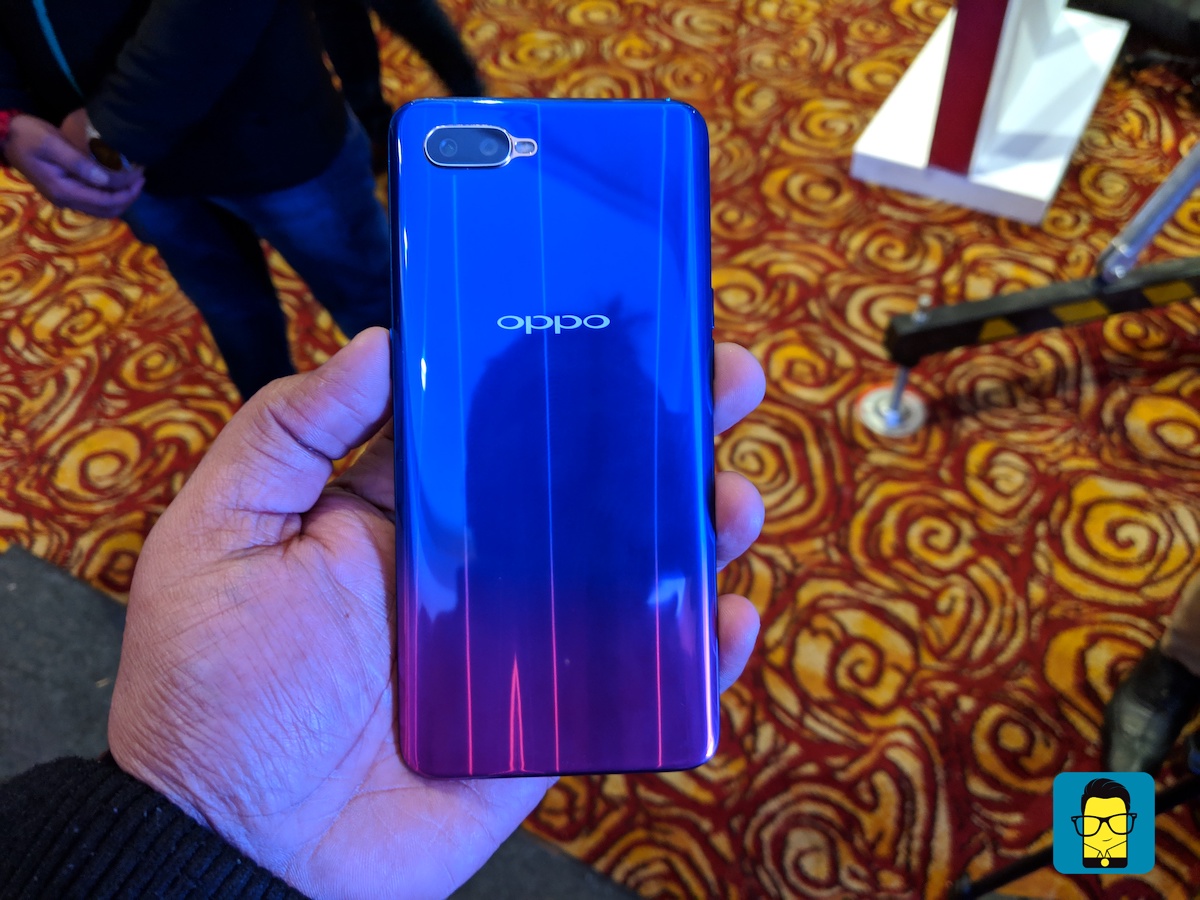 With the K1, OPPO has finally moved on from the MediaTek Helio P60 to a more powerful Snapdragon 660 SoC. It is heartening to see an OPPO phone with a powerful processor in the under 20k price category. You also get the phone in a single variant with 4GB of RAM and 64GB of internal storage. You can further expand the storage to up to 256GB using a microSD card. This is a fairly powerful setup and even the most power-hungry users can extract enough grunt for gaming. 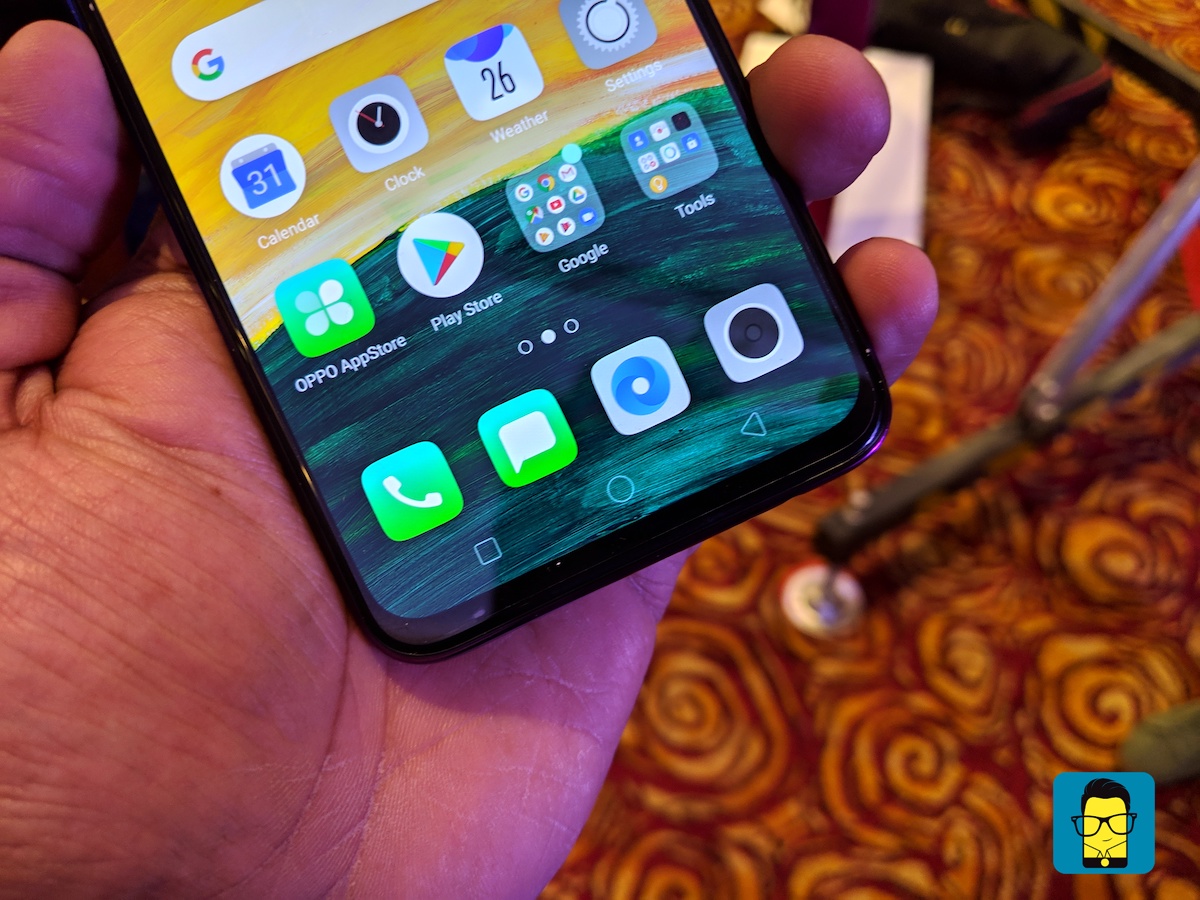 The phone has OPPO’s homegrown Color OS 5.2 based on Android Oreo 8.1. Again, I think Android Pie should be a standard in all phones launching in 2019. So, this is another letdown. But an update should come soon, let’s hope so.

As for the cameras, you get a 25MP shooter on the front with AI for beauty and 8 scene detection modes. On the rear, you get a 16MP+2MP setup with a flash for low light situations. I really didn’t get time to take a lot of shots but here are a few samples for you to see. 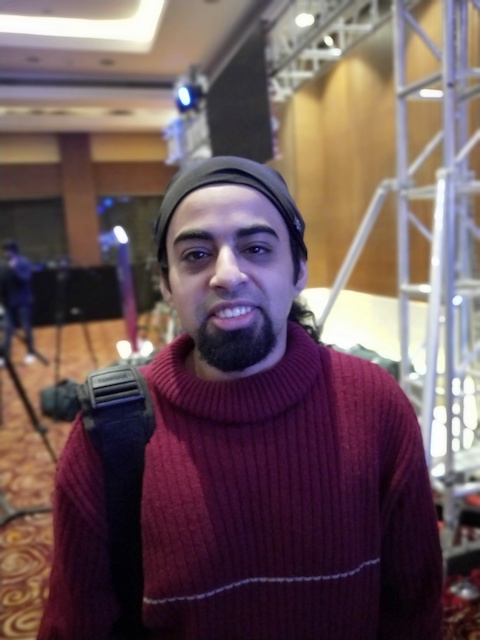 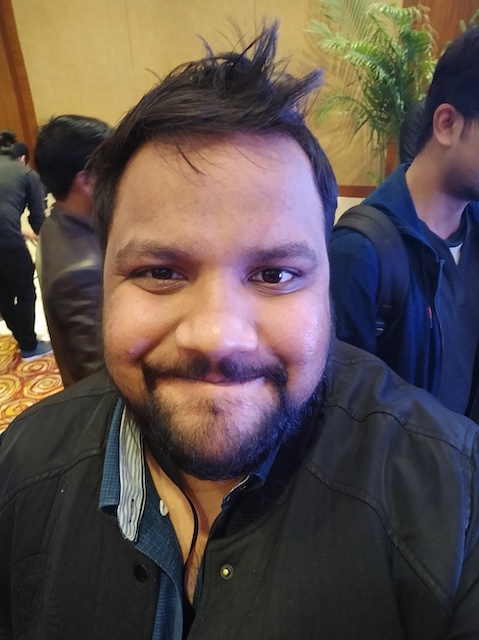 For more camera samples at high-resolution, visit this LINK.

Closing thoughts on the OPPO K1 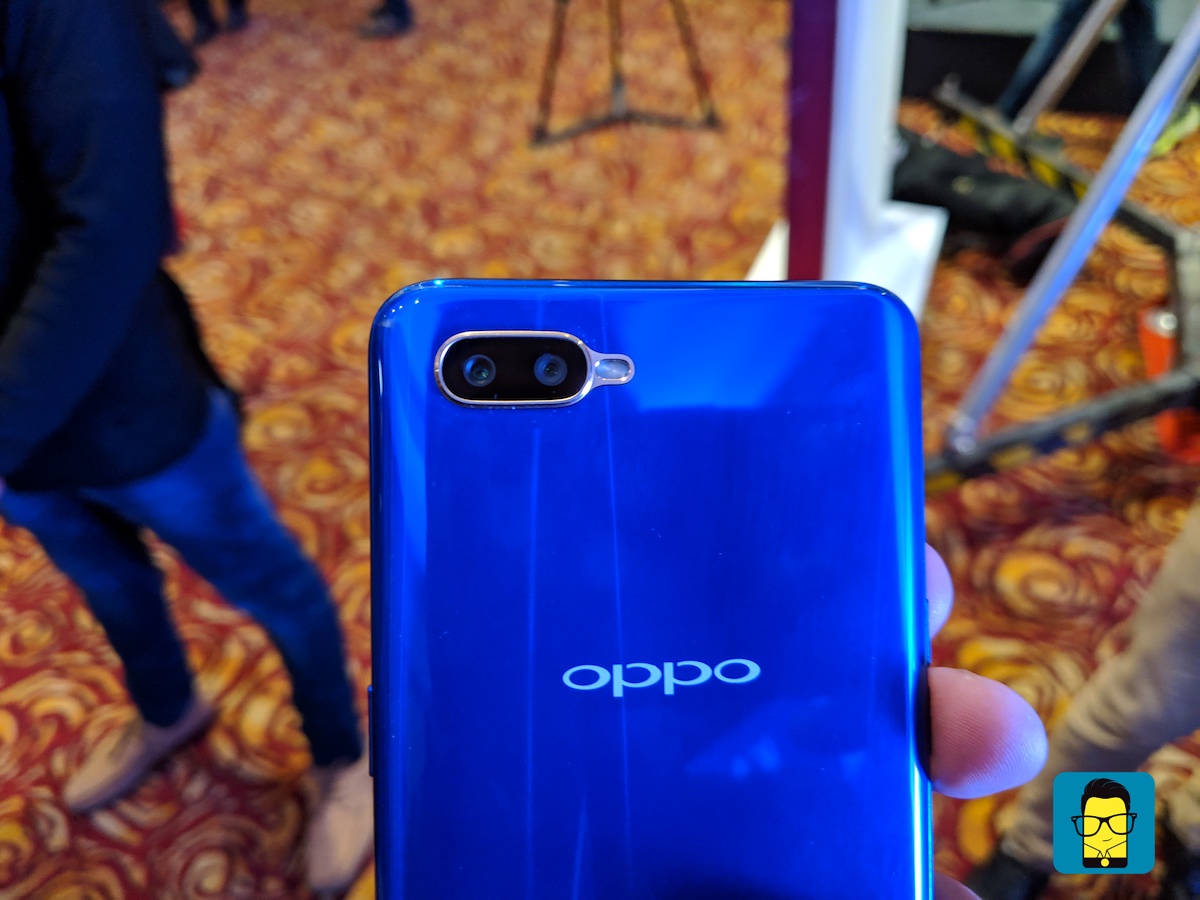 The OPPO K1 is by far the company’s most value-for-money phone till date. At least on paper, it feels like an attractive proposition for anyone looking at a powerful phone in this price range. Furthermore, it looks good too and the AMOLED display with an in-display fingerprint scanner is serious value addition. I am not particularly a fan of in-display scanners in general, but it is good to see that OPPO has made it more accessible for a lot of smartphone buyers.

What do you guys think of the OPPO K1? Do let us know in the comments section below.