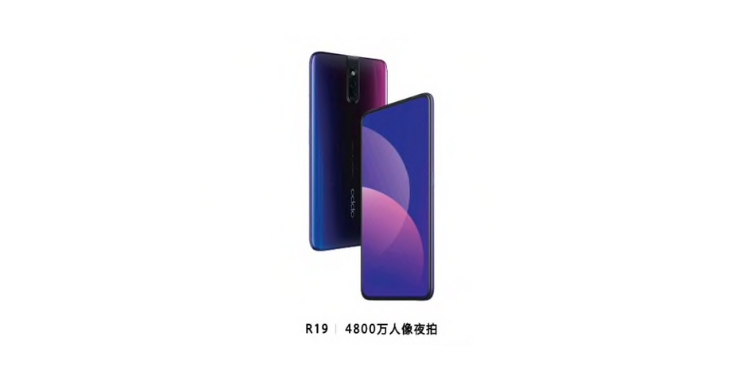 OPPO is all set to bring its new R series handset dubbed as R19 to China. The handset that has been previously believed to pack a pop-up selfie camera just like the Vivo’s upcoming Vivo V15 Pro. The handset now has been freshly leaked in a new teaser posted on Weibo, which confirms the name and one more interesting camera aspect.

The camera fact that is almost confirmed about the upcoming OPPO R19 is the detail about the primary camera on the rear dual camera setup. The main sensor is believed to pack a 48MP lens, at this stage it is unknot whether it would be Sony’s or not. But it is likely to be a Sony sensor.

The Chinese smartphone hasn’t introduced a handset with the pop-up mechanism but has instead gone ahead with its slide-out camera introduction on the OPPO Find X. Vivo, on the other hand, would be introducing its second handset with such feature, first being the Vivo Nex launched in India last year.

Let’s talk more about the OPPO R19 poster, it gives us the idea that the company is again going with a gradient look, preferably purple and blue. There is no fingerprint sensor on the rear, which suggest the company could very well give one underneath the display.

There is no much information available regarding the OPPO R19. The availability does are unknown yet, although, the company is believed to make it official sometime in March. Still, we would recommend you to take this information with a pinch of salt.