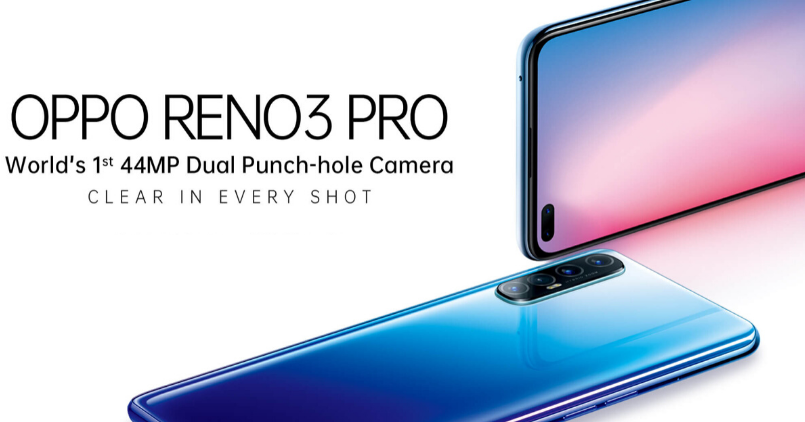 OPPO has launched its latest Reno smartphone in India. The smartphone manufacturer has come up with Reno3 Pro, which is priced at Rs 29,990. The pre-order starts from today, while the sale from March 6. After releasing its Reno series last year, this year we see the third upgrade within the span of one year. Let’s talk about the OPPO Reno3 Pro in detail below.

Speaking about the rear camera setup, there is quadruple rear camera support. Where the primary lens is 64MP, followed by a 13MP telephoto lens, an 8MP ultra-wide lens, and a 2MP monochrome lens. That’s about the camera setup of the all-new Reno3 Pro.

Talking about the processor, OPPO has used the all-new MediaTek P95 chipset, which was recently released by the chipset maker. The handset maker becomes the first in the world to utilize this feature. You can learn about this processor in a separate post in case you want to. Moving to the configuration, the Reno3 Pro will be made available in two configurations, 8GB + 128GB and 8GB + 256GB. The 256GB model will go sale later for Rs 32,990.

Sporting a 6.4-inch Super AMOLED display it offers a 500nits peak brightness, gorilla glass 5 protection, and 20:9 aspect ratio. The handset weighs 175 grams and has an 8.1mm thickness. The brand calls it the lightest and slimmest Reno smartphone. The phone will be available in three colours including Aurora Blue, Midnight Black, and Sky White.

All this is powered by a 4025mAh capacity battery and is supported by a VOOC 4.0 30W fast charging. It will be running on the ColorOS 7 based on the Android 10. What do you guys think of the OPPO Reno3 Pro? Let us know in the comment section below.