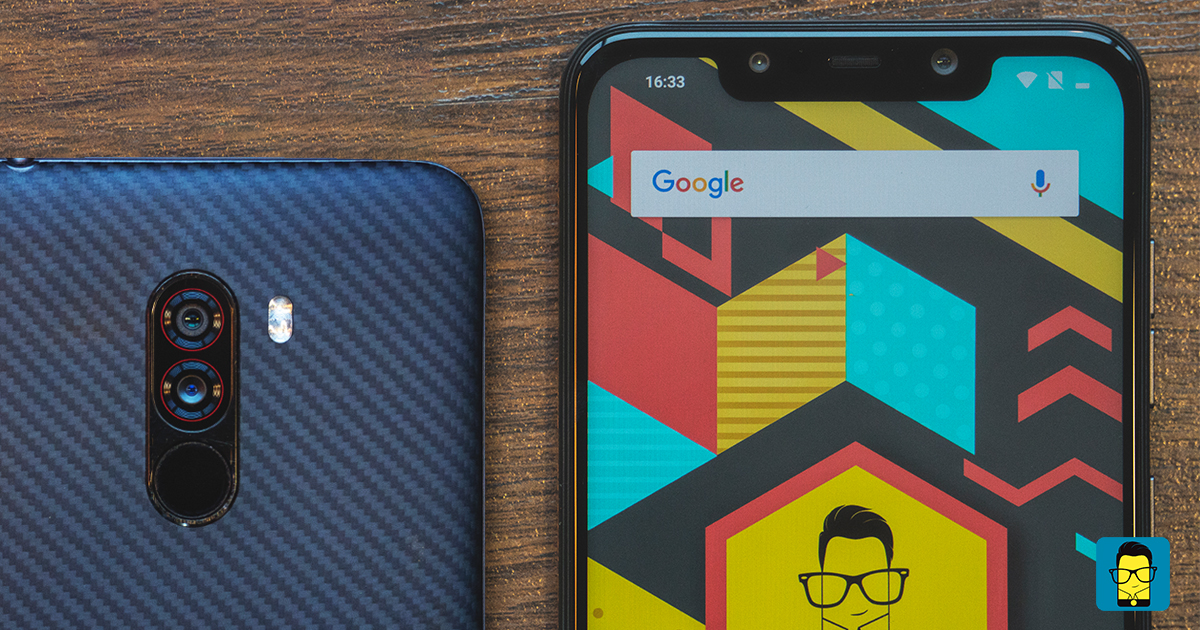 I am really not going to waste much time introducing the Poco F1. Everyone, literally everyone knows this already – the Poco F1 is currently the most affordable Android phone at the moment with flagship-grade specs. The pricing of Rs 21,000 for the base variant with SD845 and 6GB of RAM,  just shocked everyone when it launched. 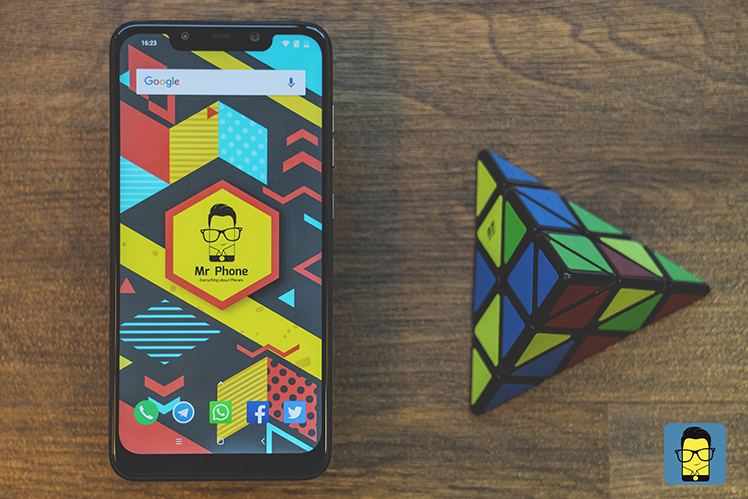 Now, I’ve used the Poco F1 as my daily driver since the day of the launch. I’ve literally spent all my waking hours with the phone so I can answer the two most important questions in everyone’s minds:

Let’s get right down to it.

Okay, the Poco F1 is not a looker. But, to call it a bad looking phone will be taking it a little too far. It is a utilitarian design with a big emphasis on daily usage. Poco’s reasoning for a staid design is that most people use the phone with a case. And therefore, why does it matter if your phone has a glass or metal. If it helps cut costs, then toughened plastic is not a bad option. And, I am mostly in line with this theory. 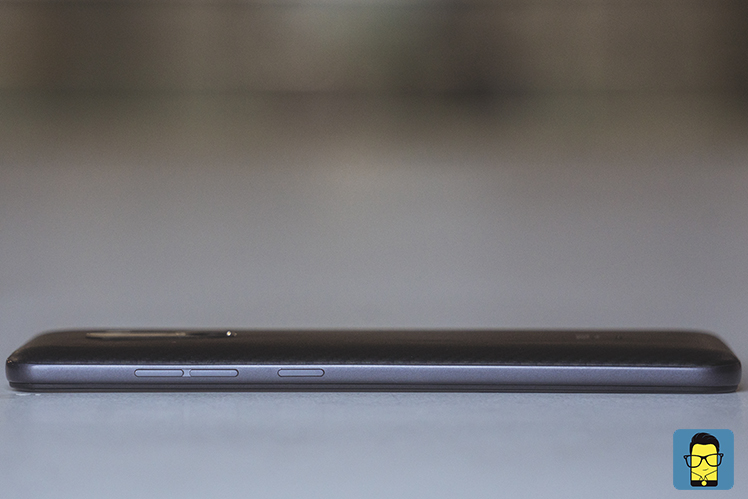 While Mr. Phone got the armoured variant of the phone with the Kevlar back, I also saw the other variants at the launch event. They look okay but feel good to use. The material used on the rear ensures that the phone is not slippery. Our armoured variant is definitely pretty damn grippy, which is a refreshing change from all the glass back phones I’ve used this year. However, the Kevlar back variant also attracts smudges and it sticks on the phone. It is not easy to remove these smudges. Thankfully, it is not easily visible. So, that’s a good thing.

Furthermore, the phone feels extremely sturdy. In fact, I even dropped the phone a couple of times inadvertently, and it not so much as a scratch was registered on the phone. 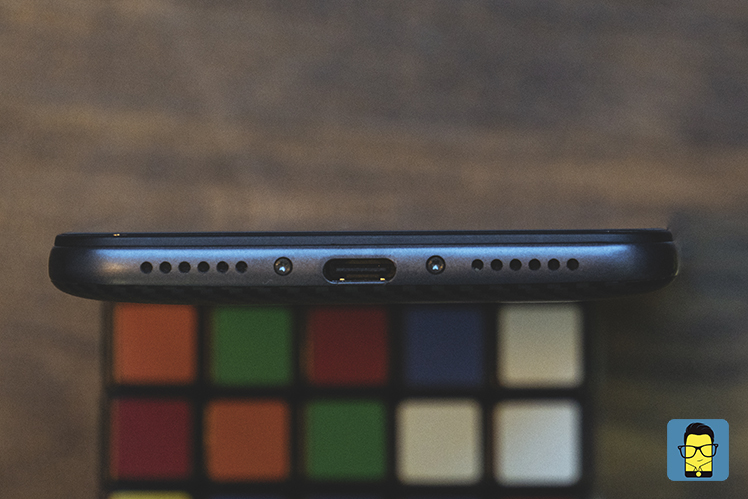 The power button and the volume rocker are both placed on the right edge of the phone. The tactile feedback is great on these buttons but I would have ideally liked a ridged surface on the power button to distinguish it from the volume rocker. You have the 3.5mm jack on the top. The left edge has the SIM card tray, which is a hybrid setup. It can take two Nano-SIM cards, or one Nano-SIM card and one microSD card. 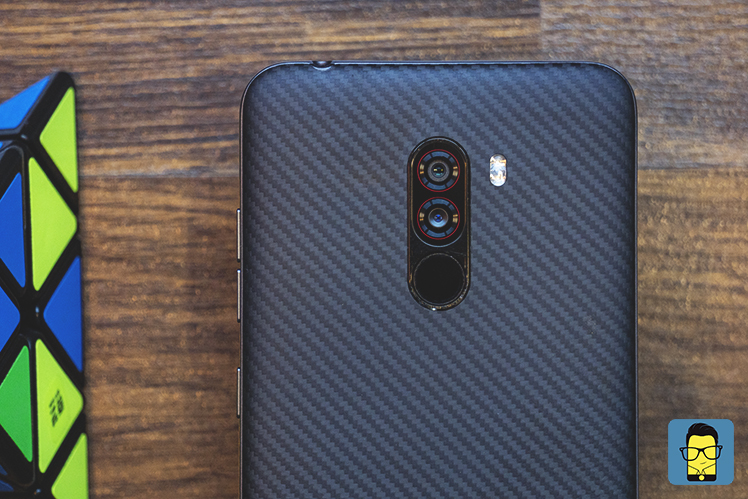 At the bottom, you get the USB Type-C port but internally you only get USB 2.0 speeds. This port can also be used as an OTG driver for pen drives, so if you want to add even more storage you are sorted. Flanking the Type-C port on either side are speaker holes. Only the one on the right is the speaker, the one on the left is there for show. But, the Poco F1 has a stereo setup with the earpiece working as the second speaker. I will talk about the quality a little later.

Fun fact: the LED notification light sits on the bottom chin. I have never seen such placement before this.

Poco F1 display: the biggest drawback of the phone

The front of the Poco F1 is the most unattractive side of the phone. The big notch is an eyesore and the phone has a massive chin as well. Thankfully, the notch houses an infrared sensor for faster face scanning, so its big size is a tradeoff I can take. 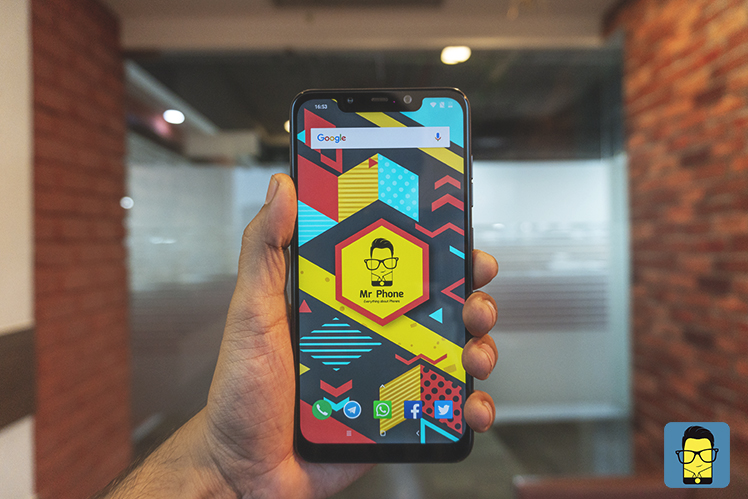 The display is a large 6.18-inch IPS LCD panel. It has muted colours and the brightness levels are very low. I couldn’t read on the screen properly when I was out and about in the bright sunlight. Xiaomi does give you the option to tweak the display settings, but I could never get the right colour temperature. On the bright side (no pun intended), you can turn off the notch. But, the edges of the notch are not aligned with the curved edge of the display at the bottom. So, that’s a bummer for those who have OCD for good symmetry like me.

As for the protection, the display has a layer of Corning Gorilla Glass 3 for protection from scratches and drops.

Overall though, the display is definitely not flagship-grade and this is probably the area where Poco has made some compromises. 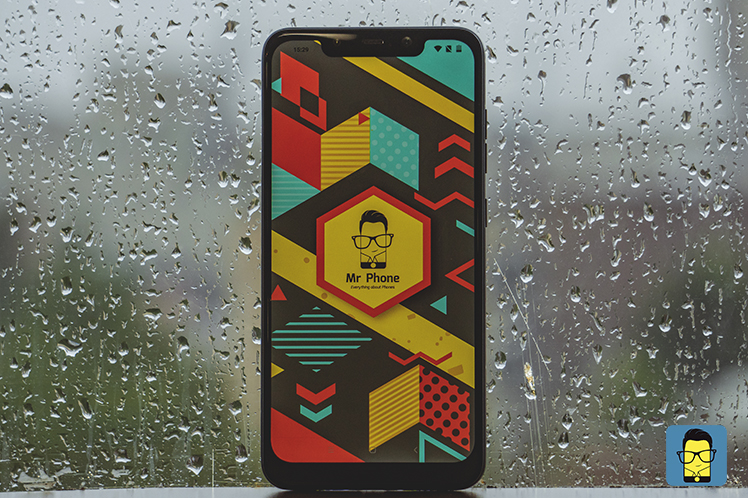 The coolest thing about the Poco F1 is the new tweaks to MIUI 9 and the addition of the Poco launcher. You get an app drawer, which a lot of folks would be very happy about. Moreover, this is one of the most versatile app drawers I’ve used till date. There are also other subtle tweaks in Poco launcher that make it closer to stock Android than MIUI, in terms of UI and UX. Let’s break it down. 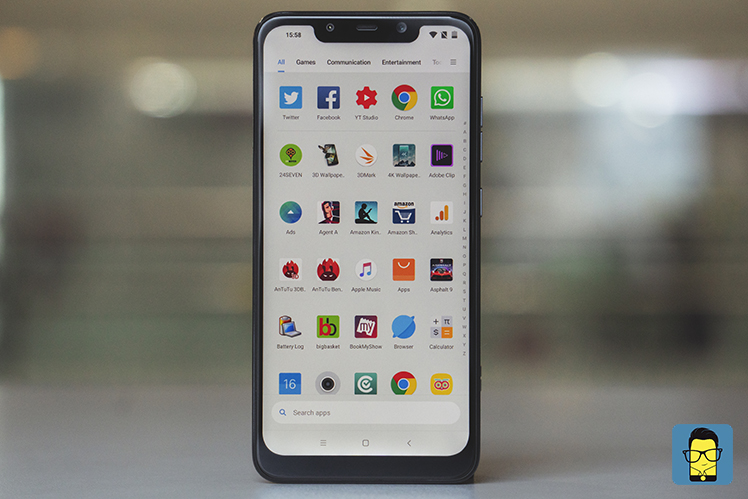 Overall, the new Poco launcher is a great fork of MIUI that I am glad does things differently.

Poco F1 camera: the Achilles heel of the Poco F1

The Poco F1 has a 12MP+5MP camera setup on the rear. The 12MP camera has a large 1.4-micron pixel size and the 5MP secondary camera is used for depth information. This setup is similar to the cameras in the Mi Mix 2S and the Mi 8. On the front, you get a 20MP camera with an f/2.0 aperture lens, which is the same setup as the one on the Redmi Note 5 Pro. At least the camera hardware, a mix and match of components from Xiaomi’s different phones, looks good on paper. 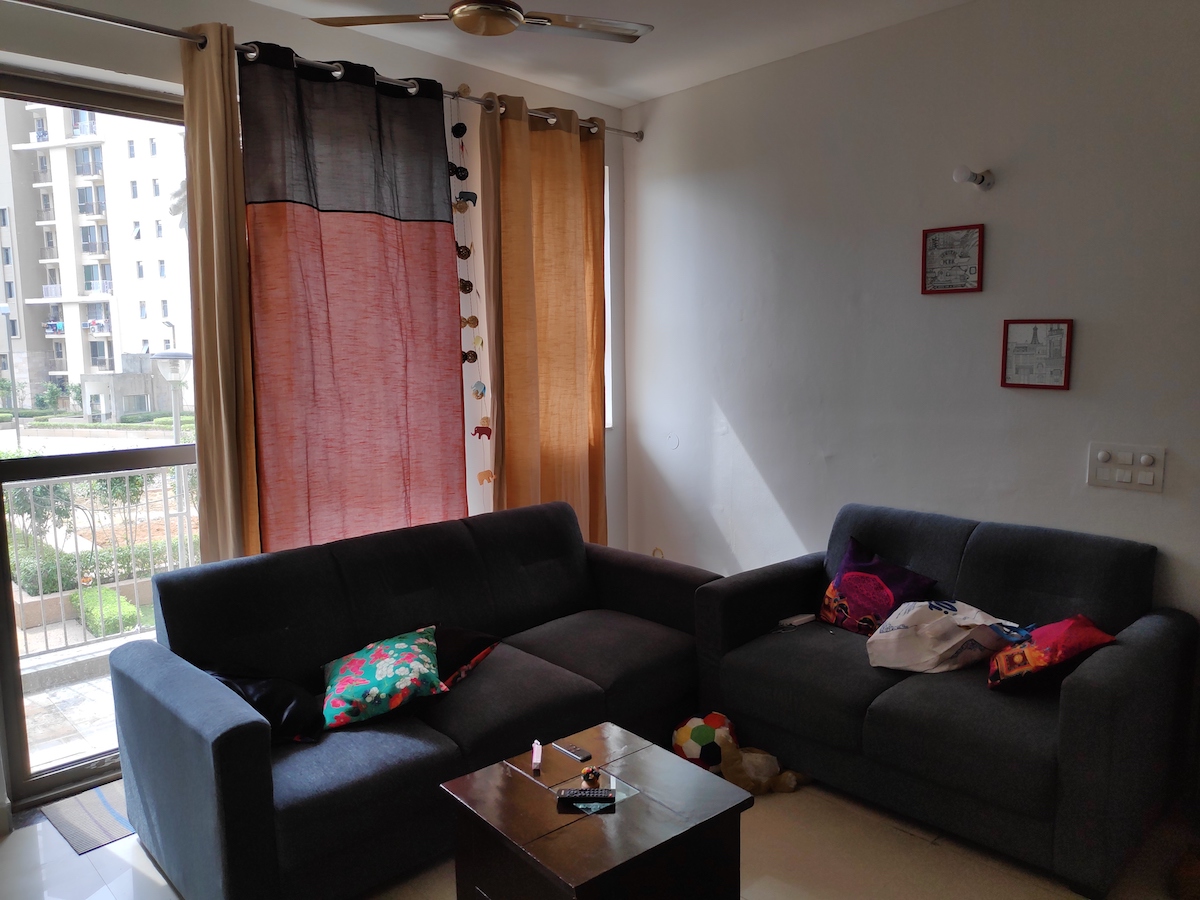 What I will do, is highlight all the important points of my camera tests in simple pointers as usual:

In short, the Poco F1’s cameras are good enough for social media uploads but they are not flagship-grade in my opinion. If you are wondering, the OnePlus 6 and the ZenFone 5Z definitely take better pictures.

Poco F1 performance: as fast as an F1 car

Like its name suggests, the Poco F1 is fast. And, why wouldn’t it be? Our review variant has 8GB of RAM and 256GB of internal storage, with the ability to expand up to 256GB more using a microSD card. In my time with the phone, I was completely taken aback by the responsiveness of the phone. In a good way of course. 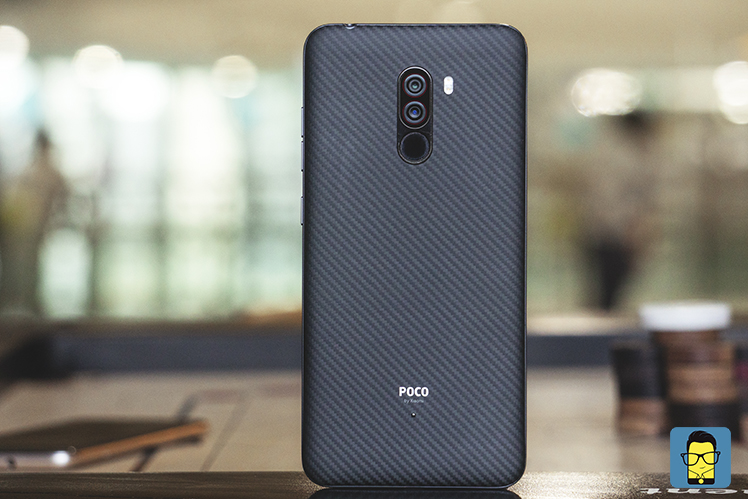 Also, thanks to the liquid-cooling technology achieved by the vapour-based copper heatsink inside the phone the Poco F1’s temperatures are mostly kept in check. I had a lot of fun playing games on the phone, honestly. The phone also keeps apps in memory without shutting them down unnecessarily.

After using the phone, I am convinced that it is not too far-fetched to call the Poco F1 – the “Master of Speed” – like all the marketing communication by the new Xiaomi sub-brand. 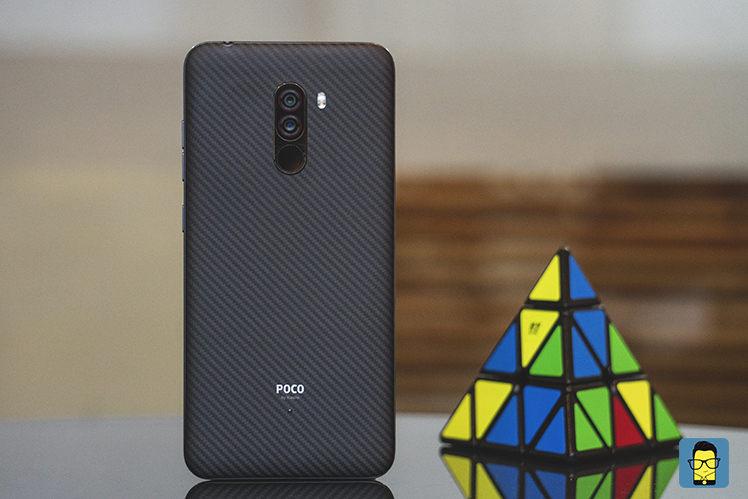 One thing that took me by complete surprise, is the audio quality. The Poco F1 has the same amplifier setup as the one inside the Mi A2 and the Mi A1. This means that you get impressive sound quality through the 3.5mm jack. I used a FiiO FH5 with the phone and I had to keep the volume levels at 60 percent. It got a little too loud. I liked the dynamics and the signature on offer. The phone also supports all the high bitrate Bluetooth codecs, for improved audio quality, like aptX, aptX HD, and LDAC. 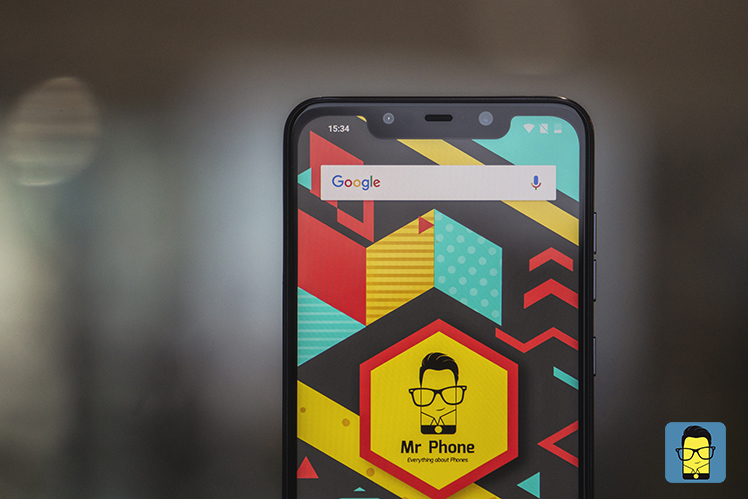 Also, the stereo speaker setup is great too. No complaints there. If only the display was also of flagship-quality, that would have completed the Poco F1 as the complete multimedia package.

I used the Poco F1 in around the Delhi NCR region with my Airtel SIM in the SIM 1 slot. For some odd reason, I don’t get VoLTE, but the call quality is great through the earpiece. The phone offers a crystal clear sound and I didn’t notice any distortion. Also, the network was never patchy and I never had a single 4G connection issue. But, I did face a call drop in my lift test, which is fine because most phones do not survive. 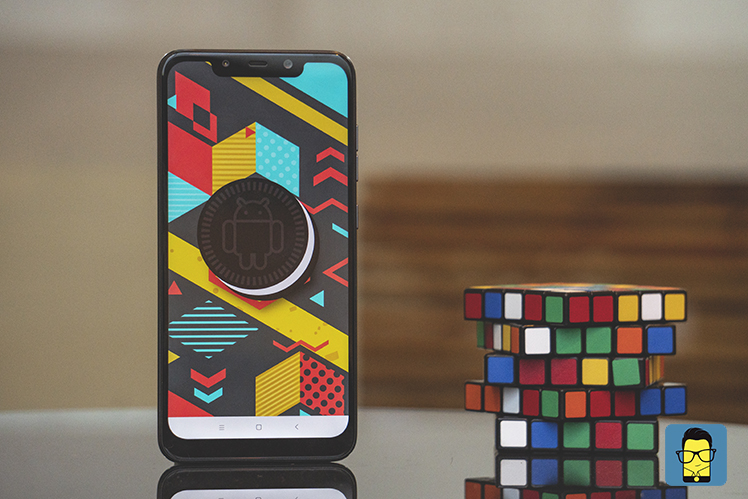 Based on my review up until now, you’d have had an idea of my usage. In one of my moderate usage sessions I got 7 hours and 14 minutes of screen-on time and in another heavy usage cycle, I achieved 5 hours and 33 minutes of SoT. Essentially, the phone will easily last you a day’s worth of heavy usage even if you play 2 hours of PUBG daily. Moreover, the 4,000mAh large battery supports Quick Charge 3.0 fast charging. In the box, you get a 9V/2A charger. I managed to charge the phone from 0 to 100 using this charger in 2 hours and 20 minutes. It is not very fast, but maybe you can get a more powerful brick for the same. 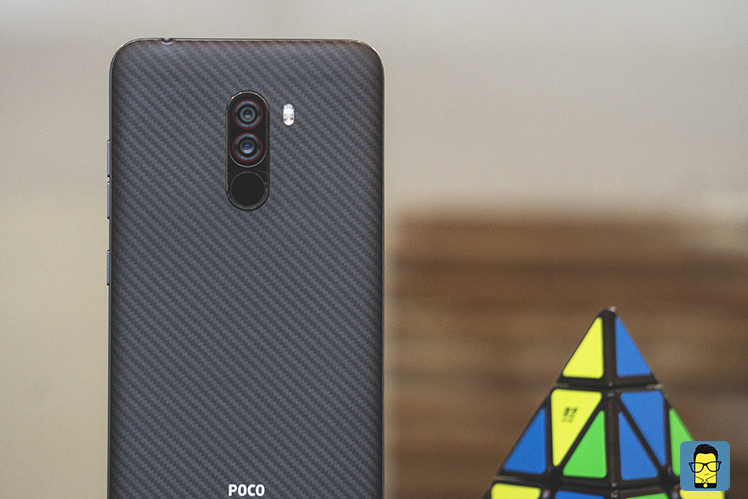 Should you buy the Poco F1?

Yes, absolutely. But, that is if you can buy one. Obviously, like every other Xiaomi phone out there, the Poco F1 is also going to be available only via flash sales. Most of you will be super disappointed that you can’t get one on time. However, the immense value that this phone provides is unmatched in the industry right now. There are very few compromises and in some cases, the Poco F1 manages to punch above its weight when I compare all the affordable flagships with a Snapdragon 845. For example: 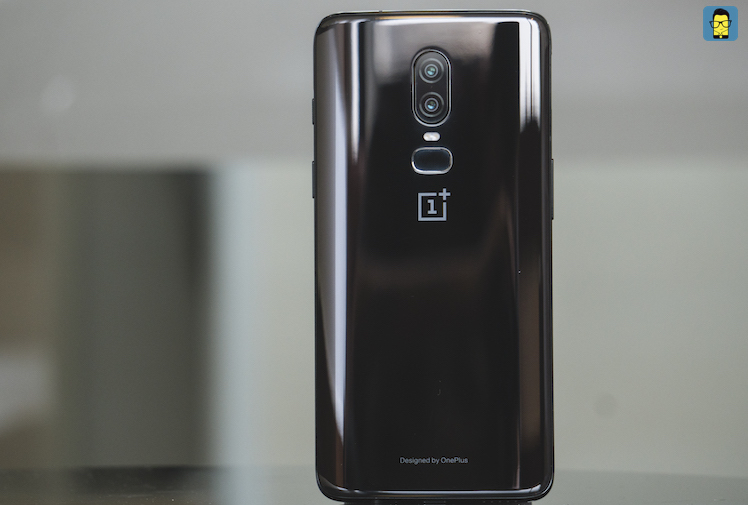 However, there are still many reasons where one can easily argue that the OnePlus 6 and the ZenFone 5Z are better options overall. Like…

…and, many many more. 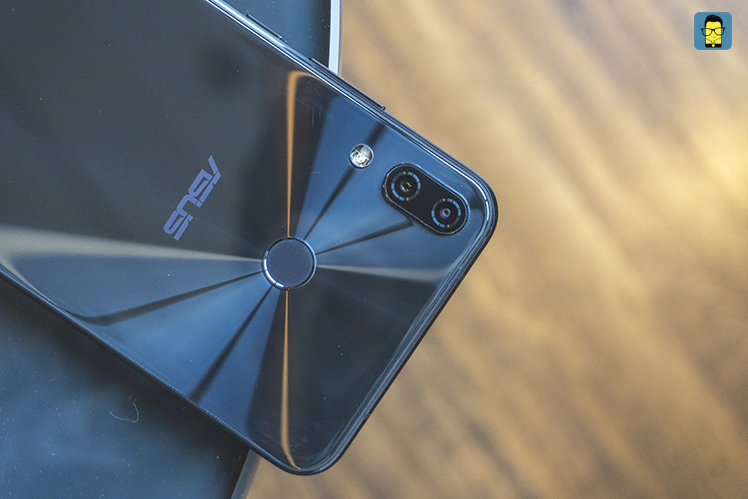 I will definitely do a full comparison between the three phones. But for now, the Poco F1 still bamboozles me. I don’t know and can’t understand how Xiaomi managed to pull this off. Android flagships like the OnePlus 6, the ZenFone 5Z, and the Honor Play are still value-for-money phones, but the Poco F1 is definitely the only Android flagship phone that gives you more than what you are paying for. It captures the pulse of the Indian smartphone market; the one that is price sensitive and places an inordinate emphasis on specs.

I really cannot wait to see what Poco’s follow up the phone will offer next year. If Poco goes the OnePlus route, then we are definitely in for increased prices. So in this scenario, I suggest you start getting ready to buy this one in a flash sale because phones like the Poco F1 cannot happen every year.