Home | Tech News  | The Razer Phone is coming to India, confirms CEO in a tweet to Mr. Phone

The Razer Phone is coming to India, confirms CEO in a tweet to Mr. Phone Razer is a well-known name in the gaming laptops community but last year they made waves with their first ever gaming-focussed Razer Phone. Now almost six months after the phone was introduced to the US market, Razer’s CEO has confirmed on Twitter that the Razer phone is indeed coming to India.

It makes sense for Razer to bring its gaming phone to India considering there is a huge opportunity for growth in the country. With games like PUBG entering the space, there are undoubtedly more takers for a niche gaming phone. 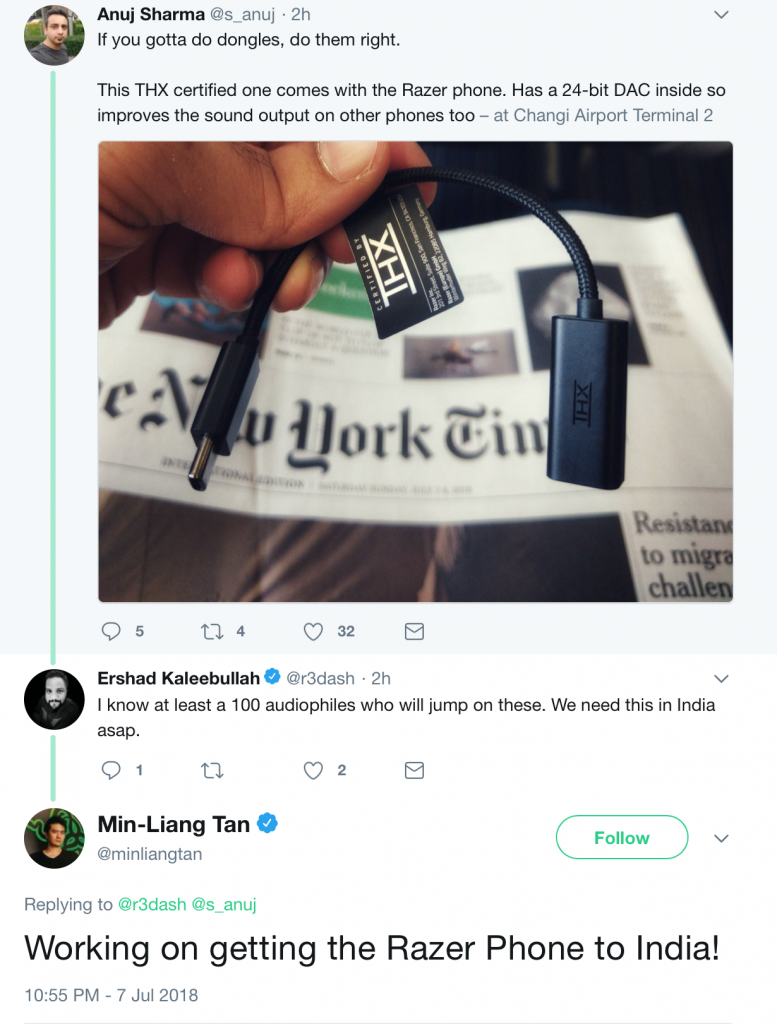 Anuj Sharma, who formerly worked as – India Product Management Head for Lenovo – recently moved to Razer. It led us to speculate that Razer could be coming to India. In a tweet today – while replying to Anuj Sharma and Ershad – Razer CEO confirmed that the company, is indeed, working on getting the phone to India.

The Razer Phone was created after the laptop-brand acquired the short-lived Nextbit. And honestly, the device looks very similar to the Nextbit Robin in more ways than one. Now coming to specs, the Razer Phone sports a Snapdragon 835 SoC coupled with 8GB RAM. It also comes with an industry-first a 120Hz refresh rate screen on an Android phone.

The Razer Phone has big bezels, so that gamers can comfortably place rest their thumbs while gaming. You also get a dual camera setup at the back with the primary camera using a 12MP sensor attached to an f/1.8 aperture. The secondary camera, use a 12MP camera with a 2x near-optical zoom lens again. It also comes with a huge 4000mAh battery inside, which should be enough to last your long PUBG sessions.

Who’s excited for the Razer phone? Let us know in the comments and stay tuned for more awesome smartphone news.